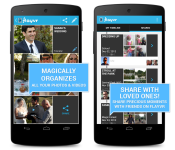 Flayvr has been around for a little while now, aiming to offer a more functional gallery app. Recently, it was featured on Google Play as one of the Best Apps of 2013, and for good reason. It has gone a pretty long time without any huge updates, so let’s take a look at the changes.

The newest version looks to create a better photo sharing experience, while still respecting your privacy. You can now share with whomever you’d like, through Flayvr. Previously, there was no central “home” in the app. Now, when you boot it up, there is now two options to choose – My Timeline, or Shared. The My Timeline column shows all of your photo albums, while the Shared column shows the photos and albums that you want other people to see.

Here are all of the 2.0 highlights:

If the official Photos or Gallery apps just aren’t doing enough for you, we’d recommend trying this one out.

My favorite RSS app for Android, Press, was recently updated to version 1.5. The update brings with it some new features the app had been missing, solidifying its place on my home screen.

In the 1.5 update, the team at Press has added a new night (dark) theme, immersive mode for Android 4.4 KitKat users, and the ability to send articles to Instapaper or Pocket with a tap.

I have been using the update for a little over a week and absolutely what Press has turned into. It went from a great looking app, with a few features missing, to an app full of features, and the looks to match.

The update is free to existing users. New users will be set back $2.99.

The new game follows the familiar theme set by the prior games, Om, the candy-loving creature, sees spiders trying to steal his candy, though there is a new cast of characters and gameplay elements. The game is $0.99, though there are in-app purchases, mostly focused on special power-ups and cosmetic changes. The game itself is fully unlocked with purchase.

Like most level-based puzzle games and its predecessor, Cut the Rope 2 starts off slow to give the player a chance to learn its most basic functions and controls as ropes are sliced in perfect time to toss the candy into Om Nom’s infectious grin. Things like air cushions and balloons help keep the candy from falling off of a cliff and turning Om Non’s adorable grin into an “awww” producing frown but a bunch new characters add a ton of creative new elements to an already creative game.

What appears to be hedgehogs crossed with aardvarks can spit out their tongues across a chasm creating a bridge to stop or roll the candy towards its final destination. Baby elephant looking creatures turn their long noses into springs to bounce Om Nom or the candy closer together and in the path of stars that can add to the game’s longevity. These whimsical characters add a fun new dimension to what could have been an otherwise dull experience if the developers had just created new levels under the game’s already brilliant design. They expand on a simple concept and give the puzzle creators more possibilities and challenges to throw in front of their players, which gives the players ample opportunities to replay it as they try to capture those elusive stars.

First Mac Pro Review Units Out in the Wild

With the new Mac Pro beginning online orders today, review units have begun to arrive at select publications. The Verge is one of the first to show off their unit, posting a short piece with some photos and first impressions.

It’s astonishingly reflective — I can see the screen clearly, and anyone who walks by is immediately recognizable — and it picks up fingerprints really easily. But it’s beautiful, understated, and looks great on a desk next to the 4K Sharp monitor we’ve paired it with. It’s particularly good-looking with its case off, exposing the Mac Pro’s machinery, but the case is required to dissipate heat. You can’t even use the Mac Pro with it off.

All the device’s ports are on the back, bordered by a light that turns on and pulses when you spin the computer toward you. When you first turn it on, the fan kicks in, smelling a little like a new car at first. But we’ve been using it for a few minutes and it’s quiet and cool, with little indication that it’s even on in the first place. It’s so unassuming and unadorned that you almost overlook it — that’s a huge improvement from the big, boxy previous models.


Orders for the new Mac Pro now have an estimated shipping time of February, after initially showing estimates of “by December 30″.

Update: An unboxing video has been posted as well. 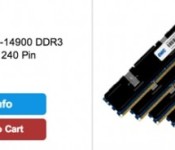 Following today’s launch of the new Mac Pro, Other World Computing has announced new RAM upgrade kits for the machines. The ECC 1866 Mhz quad-channel kits are available in both 32 GB and 64 GB at prices up to 31 percent lower than factory upgrade options.

Crucial has memory upgrade options available as well, with a 32 GB kit priced at $439.

OWC is also offering a trade-in rebate for the original factory memory, giving customers up to $100 towards the purchase of a memory kit. Apple’s Mac Pro, which went on sale at midnight, is currently shipping in February at the earliest.

With the first review units of the Mac Pro in the wild, FCP.co has posted an actual unboxing video of the device.


The Mac Pro, which is assembled and packaged in Austin, Texas, comes in a sleek black box with a plastic handle at the top. Inside, there is minimalist, environmentally friendly molded foam with the aluminum Mac Pro wrapped in plastic for protection.

Several reviewers have commented on the surprising density of the Mac Pro, saying it is heavier than they expected.

Tizen UI Screenshots Leak Out to the Web

Tizen is making some noise again this morning, with several UI screenshots being found in the Korea Intellectual Property Rights Information Service database. The shots are from Tizen 2.1, and they are pretty different from what we have seen in the past. We get a good look at the dialer, messenger, calendar, and notification area, and it looks like Samsung is creating a nice UI for themselves.

Tizen is being considered Samsung’s “backup plan”, I guess just in case something happens between them and Android. That is most likely never going to happen, because Samsung leads in the most sales with their Android phones. Still, Samsung plans on releasing Tizen to the public next year, and is looking to be unveiled sometime in February.

I must say, it actually is looking a lot better from previous screenshots we have received, and it’s even looking better than TouchWiz in a way. That is just personal opinion, and I would like to know what you guys think about these screenshots. Is Tizen looking good in your eyes? 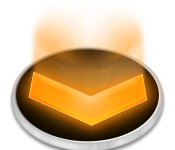 I certainly hope that many of you were as excited about Plex becoming available for the Chromecast as I was. Its addition to the offerings that the $35 device can play was a big win for Plex and Android users alike. It didn’t come without its little quirks and issues though. Like with any new software addition, there will need to be some tweaks made to solve issues on a grand scale after launch. Thankfully the Plex team works pretty darn hard to keep things running smooth, add new features and support their users. While some of these issues might need to be solved on the app side of things, more might need to be solved on the server side of things.

Since you essentially are the server, updates to the server software that helps you brings your personal content to your Plex app are needed. there is a new Plex media server update for all the wonderful users out there that brings the software to version 0.9.8.17.282.

Fixes for this release:
– An issue where video played with Chromecast would freeze.
– Media analysis wouldn’t work right on files with chapter tracks and subtitles.
– (FreeBSD) Crashing of transcoder with subtitles.
– Include Popcorn Hour profile.

Plex for Chromecast still requires you to be a Plex Pass member to enjoy it, but that is only temporary. Once the bugs are worked out and everything is up to code, so to speak, on how Plex wants things to be running for its general users then they will be pushing it out to the regular app. At least, this is what we have come to expect.

If you have a Chromecast, Plex Pass and your media server running, you will want to go pick up the update. It should help improve your experience.

Ever rush to identify a song with Shazam with your phone, only to be frustrated as the tune ends before you’ve even reached into your pocket? That won’t be a concern with the latest update to Shazam’s iPhone app. Much like on the iPad, the new audio recognition software can listen for music, live events and TV shows in the background, even if the device is locked; a night at the bar could leave you with a full playlist. There’s still no corresponding Android update, but iPhone owners can start producing the soundtrack of their lives after a quick trip to the App Store. 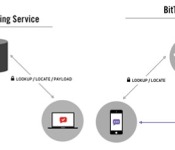 In the NSA age, being paranoid really doesn’t mean they’re not out to get you, so placating your fears has suddenly become a cottage industry. BitTorrent, for one, has just spilled more beans about Chat, it’s peer-to-peer, encrypted messaging service that recently sent out a call for alpha testers. Rather than receiving a username, you’ll actually be given a so-called cryptographic key pair, making it nearly impossible for others to guess your identity. Security is also enhanced with distributed hash tables (DHTs) — like those used in uTorrent — so that message requests are passed securely along the network to your intended recipient. That also avoids the use of a central server which could give a single point of attack for snoopers. There’s no word yet on a release date, but the group is busy upgrading its backend for the service so you might be able to put the tinfoil hat in mothballs soon.