The latest update to Skype’s Android application has just been rolled out and a big part of its goodie delivery is two-way video calling. Only a quartet of phones are supported right now: Google’s own Nexus S, HTC’s Desire S, and the Xperia Neo and Pro from Sony Ericsson, all handsets that shipped with Android 2.3 installed. We suspect the rest of the Android world won’t be far behind — Thunderbolt users will surely be wondering why they’re not included in this first batch — but for now it’s just that fearsome foursome. Also included in Skype v2.0.0.45 is a UI overhaul and support for SMS messaging, neither of which suffers from any handset restrictions. Hit up the Android Market on your phone (the web Market still lists version 1) to get at the latest software.

As things get older they tend to get bigger. It’s the same for people, corporations, models of cars, budget deficits… and so it is for webOS. As Palm was in the process of being subsumed its great mobile operating system was being eyed for much broader things, far bigger than the little phones it had previously been flashed on. Things like printers and desktops and laptops, but for its first proper foray outside of a phone it has a tall task: compete in the brutally vicious tablet space.

Its weapon is the TouchPad, a 9.7-inch tablet from HP that got official back in February and will be available July 1st (if you don’t manage to find it earlier) — $499.99 for the 16GB model, $599.99 for 32GB. That’s exactly on parity with the WiFi iPad 2 and Galaxy Tab 10.1, current kings of the tablet court. Does this plus-sized Palm progeny really have what it takes to hang at that price point, or is this just a chubby pretender that’s outgrown its britches? Read on to find out. 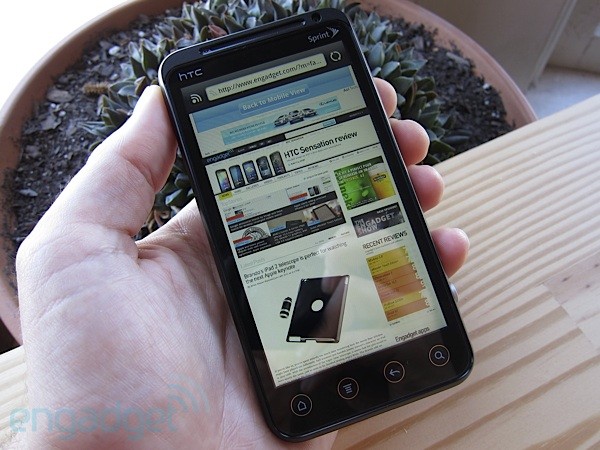 The first time we saw the rumored Supersonic we were blown away. HTC and Google had just wowed us with the Nexus One, and here we were looking at something even better — a 4.3-inch phone with WiMAX wrapped in a white body. This prototype was buggy and had abysmal battery life, but it was real. Four months later it landed in our hands at Google I/O. We’re of course talking about the EVO 4G which went on to become a runaway hit for HTC and Sprint as the first ever 4G smartphone in the US. And here we are a year later with the HTC EVO 3D, the legitimate heir to Sprint’s mobile kingdom — at least until the Motorola Photon 4G comes along. When we first played with the 3D-capable handset at CTIA we were suitably impressed, but we left with a lot of unanswered questions. How do the 1.2GHz dual core processor and qHD display affect battery life? Is 3D a compelling feature or just a gimmick? What is 2D camera performance like with the lower specced camera? Is the EVO 3D a worthy replacement for the EVO 4G? Find out in our review after the break.