This is the Google Chrome OS netbook keyboard 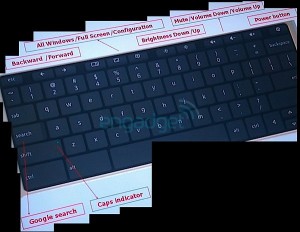 It’s just a Chrome OS sorta day, isn’t it? To catch you up here, we told you earlier that Google is planning to announce its own Chrome OS netbook this coming Tuesday, and well, now we’re peering at a supposed picture of that very machine’s keyboard. We don’t know all that much about the rest of the netbook — we’ve heard from multiple sources that it’s powered by an Intel Atom processor — but the image above was taken from an Inventec (as in, the ODM making the netbook) presentation. We’ll call a spade a spade here and say it looks like your average chiclet keyboard, but there are obviously some interesting differences. Over on the left side of the panel you’ll see a “search” key subbing for a Caps Lock key, and up above, the function row has forward / back keys as well as Window, full screen, and “configuration” keys.

Wait, but couldn’t this be any old netbook keyboard? Sure it could, we’ve got an exclusive photo of Acer’s Chrome netbook (that “ZGA” model) which happens to have the same exact keyboard layout. You can check out the picture of that one after the break, and you’ll see it looks extremely similar to this shot. We should also mention that the tipster that sent the above photo in claims the Google-branded Chrome OS netbook will be announced next Tuesday, but won’t be on sale until December 14. Looks like it’s going to be a very interesting Tuesday morning! 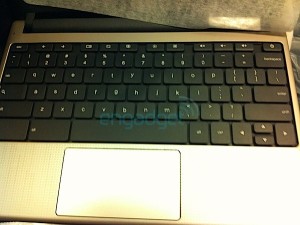