Apple’s Macs and iPads continue to have the highest customer satisfaction score among PC and tablet makers, according to the American Customer Satisfaction Index’s new 2018 Household Appliance and Electronics Report.

Apple earned an ACSI score of 83 in 2018, the same score that it had last year, remaining in the lead over Amazon, Samsung, ASUS, HP, Lenovo, and more.

According to the ACSI, Apple’s machines earned best-in-class ratings across “nearly every aspect of the customer experience” from device design to features and available apps.

Apple earned the highest score despite the fact that much of its Mac and iPad lineup has yet to be refreshed in 2018. We are awaiting refreshed iPad Pro models with major upgrades like an edge-to-edge design with slimmer bezels and Face ID, along with updates to the MacBook, Mac mini, and other machines.

Based on ASCI’s numbers, Amazon is closing in on Apple with an ASCI score of 82, with customers satisfied with design, ease of operation, and sound/graphics quality on the company’s line of tablets.

Samsung tied with Amazon, also earning a score of 82. Samsung also scores well across the customer experience, but can’t match Apple on features that include operating system, preloaded apps, and data storage.

According to the American Customer Satisfaction Index, overall customer satisfaction with personal computers (a category that includes laptops, desktop machines, and tablets) continues to earn a score of 77 on the ACSI scale.

Smartphones outpaced personal computers in customer satisfaction back in 2014, and customers continue to be more satisfied with their handheld devices, using them for more tasks that had previously been limited to computers. 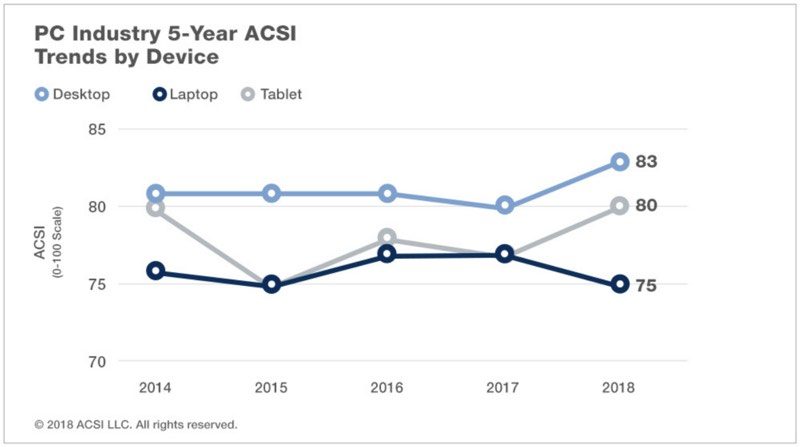 To create its scoring system and compile device scores, the ACSI uses data from interviews with approximately 250,000 customers each year, analyzing customer satisfaction with more than 380 companies across 46 industries.

Tag: ACSI
Discuss this article in our forums