Samsung Galaxy Note 9: Which storage size should I buy? 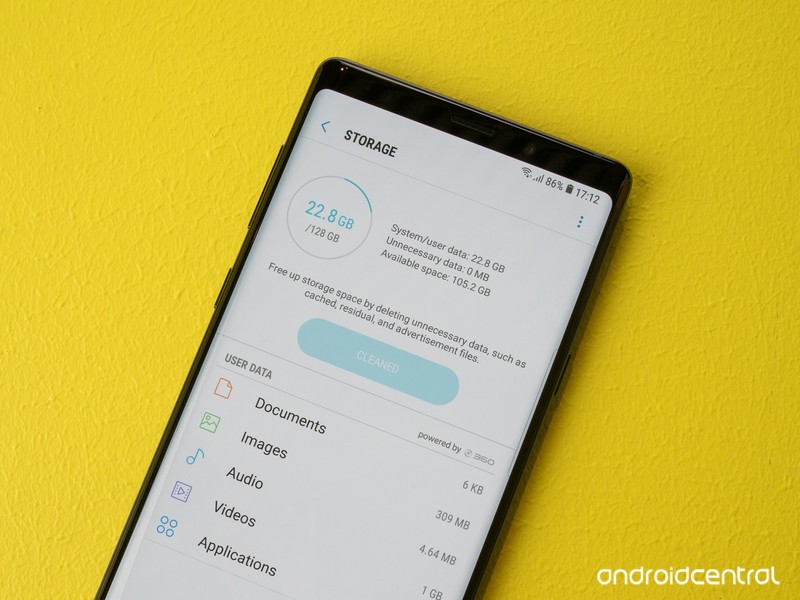 The answer is simple for most people.

Samsung pulled out the stops for the power-users with the launch of the Galaxy Note 9. Three of the biggest things spec hounds were looking for all received significant improvements over the last generation: battery, storage, and memory. At the same time, the price went up — and in the case of the 512GB model, it went way up. Most people who were originally excited about the idea of a 512GB storage Galaxy Note 9 quickly tempered their lust after seeing the $1249 price tag.

But even still, people will be looking at the upgraded model. As you consider your Note 9 purchase and try to decide which storage is right for you, we have a few things for you to keep in mind.

Who should get 128GB

128GB is the baseline Note 9 storage and will automatically grab a majority of sales because of it. Most people who had a 32 or 64GB phone previously will be extremely happy with the jump up to 128GB of storage by default. The price jump from the Note 8 up to $999 seems a little steep, but keep in mind that Samsung charges a $50 premium to go from 64 to 128GB on the Galaxy S9+ — so this isn’t that big of a deal if you were someone who was going to buy more storage anyway.

If you fit into a 64GB phone today, don’t hesitate about getting a 128GB Note 9.

With 128GB internally, you’re going to have well over 100GB of free space after your first start-up and installation of your typical apps. (After getting my own Note 9 set up, with plenty of data downloaded, I have 97GB free.) That’s a lot of space for Netflix downloads, big games, 4K video shooting and more. Even if you’re pushing the limits of your 64GB phone today, there’s a good chance you’re going to be able to make it work with an additional 64GB — and remember you always have a microSD card slot for any future overflow.

So if you’re in any way worried about the additional cost required to go up to 512GB, and fit into a 64GB phone currently, you should have no hesitations about getting the base model 128GB Note 9.

Who should get 512GB

We can’t talk about the benefits of the extra storage before first addressing the price increase. In order to get 512GB of storage, you’ll pay $250 (or, 25%) more for your Note 9. That’s a significant move on an already extremely expensive phone. It’s true that carrier and retailer financing programs can ease the burden of that extra price, but even on a 24-month payment plan we’re talking about moving from $41 to $52 per month — it’s still a big jump.

If you can eat the cost, the 512GB Note 9 is the ultimate expression of what the Galaxy Note line is all about.

But if you can eat the cost, the higher-end Note 9 with 512GB of storage and 8GB of RAM is the ultimate expression of what the Galaxy Note line is all about: doing everything to the biggest extent possible. You’re encouraged to never say the word “never,” but it’s hard to see how you’d fill up 512GB of storage given today’s file sizes for apps, music, games and video. Even if you throw out all thoughts of managing your storage in any way, and simply keep every single thing you download, you’d be hard-pressed to push the 512GB limit. (And I’d recommend that if you are storing that much on your phone that you should have a robust backup system for keeping a copy of that data safe elsewhere.)

With 512GB internally, you can add another 512GB with a microSD card (albeit for about $350) to go full-on crazy mode and have 1TB of storage available. Even if you keep things reasonable with a 256GB card (for about one-quarter the price), that’s over 750GB of storage in your hand everywhere you go.

With that kind of potential, and the knowledge that you’ll effectively never worry about how much storage you have left when downloading or creating content, if you can eat the extra cost it’s worth considering the big jump up to 512GB.

Like some other phones, Samsung offers extra RAM in the model with increased storage — in this case, a jump up to 8GB from 6GB. Just like we’ve discussed regarding the OnePlus 6’s extra RAM, we caution you against putting too much stock in what the extra memory can actually do for you.

Getting more RAM is a nice bonus — not a reason to spend $250 extra.

Yes, the extra memory gives you more room when running dozens of apps at the same time, or when running several intensive apps in the DeX desktop interface while running others on the phone itself. But the use cases where you’ll actually see a clear benefit between 6 and 8GB are minimal. With the base Galaxy Note 9 (and Galaxy S9+ as well) coming with 6GB of RAM, Samsung is designing all of its software for devices that have that memory size — it isn’t going to build things to expect 8GB of RAM, because a large majority of people won’t actually have that much.

Your choice to buy a higher-model Note 9 should start and end with a decision on whether you value having 512GB of storage at $250. The extra RAM is a nice bit of futureproofing — and bragging rights — but nothing more, and shouldn’t be a deciding factor for whether you make the jump to the higher model.

Which color Galaxy Note 9 should I buy: Blue, purple, gold, or black?