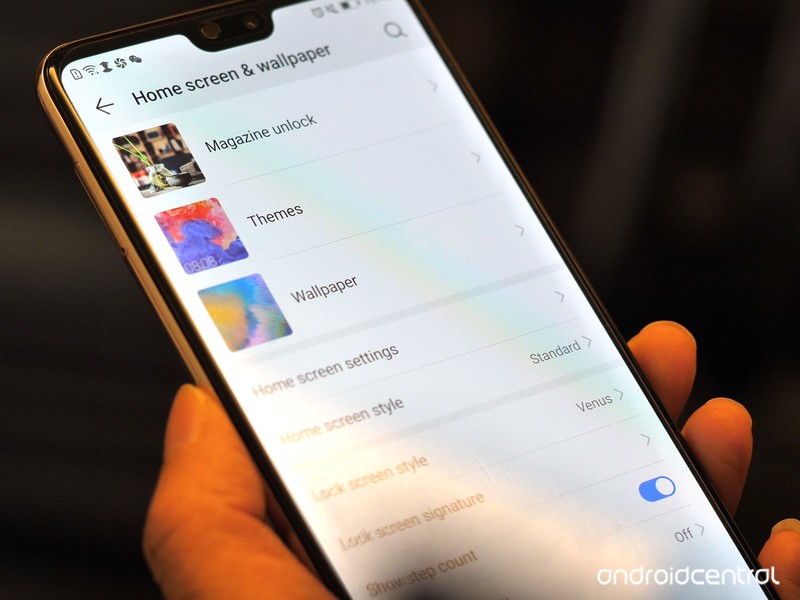 The Huawei Mate 20 is launching in just over a month, and following on from yesterday’s Kirin 980 SoC announcement, we’ve just had our first glimpse of the software that’ll run on the new handset.

The new UI sees Huawei building upon the foundations of EMUI 8, with a focus on lighter colors, and improvements to the consistency of EMUI’s look and feel. New fullscreen visuals for alarms and incoming calls aim to take advantage of the large screens of modern smartphones, while artistic illustrations punctuate the Settings app and other preloaded apps. EMUI’s settings have also been simplified considerably, surfacing the most useful options in each section, and reducing the number of menus from 940 to 843.

And in Huawei’s own apps, controls and tabs have been relocated down to the bottom of the screen, where they’re easier to reach on larger devices like the P20 Pro and Mate 10.

The new EMUI is faster, prettier and smarter.

As you’d expect in firmware based on Android 9 Pie, there’s a new task-switching setup based around gesture input. A swipe up from the bottom bezel opens the recent apps menu, or sends you home. And a swipe inwards from the left bezel goes back. The new gesture navigation system wasn’t enabled in the beta version of EMUI 9 we tried at an event in Berlin today, but it’s likely this will be the default setup on the next Huawei flagship.

EMUI 9 also doubles down in performance; Huawei quotes 12.9% smoother operation on the new version, with app load times up 12% in Instagram, 16% in Amazon and 11% in Spotify compared to EMUI 8. Huawei’s GPU Turbo 2.0 feature also promises faster gaming on the new OS version, further improving upon the GPU Turbo feature pushed out to phones including the P20 Pro and Honor 10 in recent months.

The new software should also make it easier to track your usage and make it easier to disconnect, with digital wellbeing features built in as standard. This isn’t exactly the same as Google’s Digital Wellbeing features on the Pixel phones; rather, Huawei has built its own interpretation of those features, with the ability to limit app usage and “wind down” with a greyed-out interface as bedtime approaches. Parents will also be able to set limits on app usage for kids.

The EMUI 9 beta process starts today. Huawei announced that The P20, P20 Pro, Mate 10, Mate 10 Pro, Honor 10, Honor View 10 and Honor Play will be able to apply to test this early version of EMUI 9. Expect the full version to ship on the Mate 20 later this fall.