Bose today revealed the “Bose Home Speaker 500,” a new smart speaker that comes with Amazon Alexa built into the device and support for Bluetooth music streaming from iOS and Android smartphones. The Wi-Fi enabled speaker has many of the same features as competitor devices like HomePod and Sonos One, including music streaming, smart home automation, smart assistant inquiries, multi-room music syncing, and more.

In “early 2019,” Bose says that it will introduce support for AirPlay 2 in the Bose Home Speaker 500, as well as in a pair of smart soundbars also announced today, the Bose Soundbar 500 and Bose Soundbar 700. For the Bose Home Speaker 500, the device includes an eight-microphone array for near-field and far-field voice pickup — all when it’s both silent and noisy from currently playing music.

For music playback, users will be able to play Spotify or Amazon Music directly from the Bose Home Speaker 500 when it’s connected to a home Wi-Fi network. Buttons on the top of the speaker will also allow customers to set up to six different presets for playlists, Internet radio stations, and more. Of course, with Bluetooth any audio can also be streamed from a smartphone or tablet.

The company says the Home Speaker 500 has “the widest soundstage of any smart speaker available today,” and is encased in an anodized aluminum shell that measures 8″ high by 6″ wide by 4″ deep. Two custom drivers pointed in opposite directions ensure that sound reflects off surrounding walls to separate instruments and “place vocals where the artist did,” all without “artificial effects or distortion.”

“Voice-controlled speakers aren’t new, and there are plenty of great options to choose from. But we had a different vision for ours, inspired by what we could uniquely do to make the experience better,” said Doug Cunningham, category manager in the Bose Consumer Electronics Division.

“All of our new smart speakers double up on functionality. It takes just one Home Speaker 500 to deliver true stereo separation — there’s no need to pair two. Our Soundbar 700 and 500 are thin and discreet with jaw-dropping surround sound — whether you’re streaming Spotify or watching a movie. They combine Bluetooth and Wi-Fi for unbeatable ease of use, can be mixed and matched to play in sync or separately, and with new Alexa functionality and more VPAs on the way, they’ll only get better over time.”

Notably, Bose’s smart speaker includes a front-facing display, but it doesn’t appear to be a touchscreen. In the announcement, Bose says that, “when touch control is preferred … there are buttons for basic functionality located right on the top,” allowing users to skip track, adjust volume, and more. In the owner’s guide, Bose says, “The speaker display shows speaker information and icons as well as the streaming service, album and artist currently playing.” 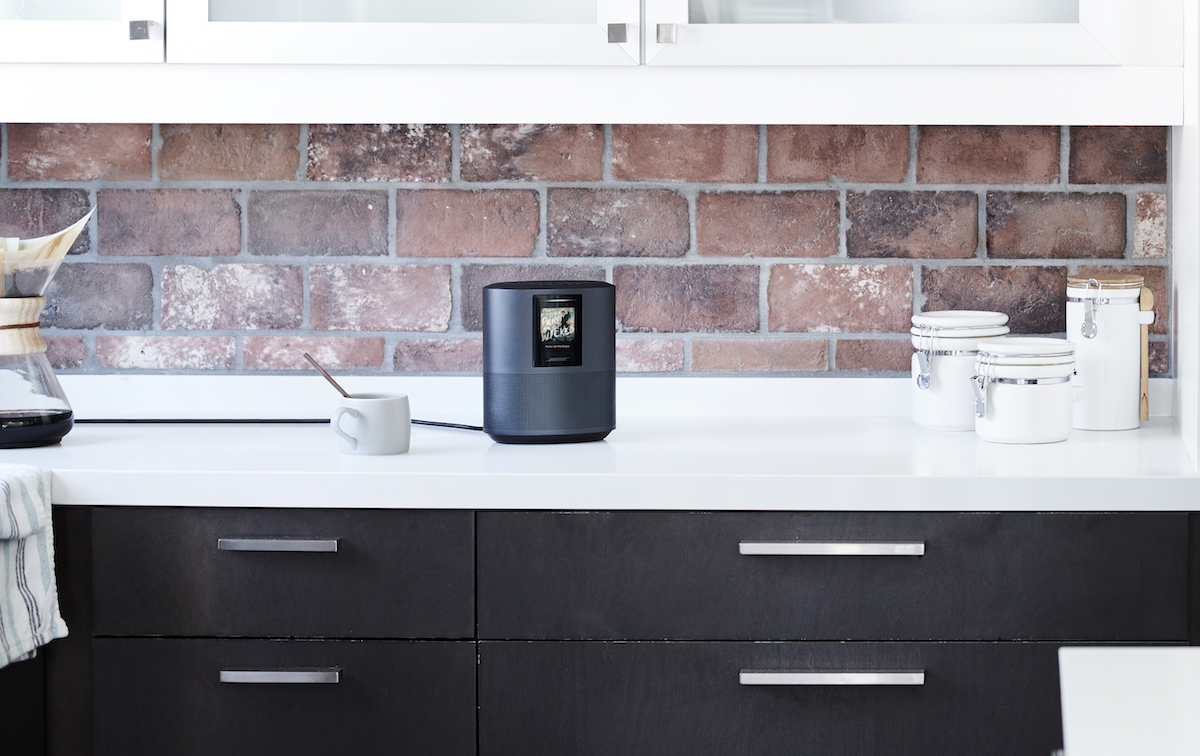 To compare, the HomePod has a 6 microphone array that allows the speaker to hear spoken Siri commands even when loud music is playing. HomePod measures in at 6.8 inches tall and 5.6 inches wide, so Bose’s option is also slightly larger. Compared to the Bose Home Speaker 500’s aluminum, Apple went for a mesh fabric webbing around the HomePod, and it only has a small 272 x 340 LED display at the top to display Siri’s waveform when commands are invoked.

Tag: Bose
Discuss this article in our forums