Lenovo Smart Display review: Much more than a Google Home

When it comes to smart assistants, Google Assistant and Amazon Alexa are the most competitive options out there. Both platforms can do just about the same thing, but Amazon has had a leg up by offering two smart speakers with displays. With Smart Displays, Google now has a product category that fully utilizes the Assistant and competes with things like the Echo Show.

Read our full Lenovo Smart Display review to see if this is something that you’d like in your home. 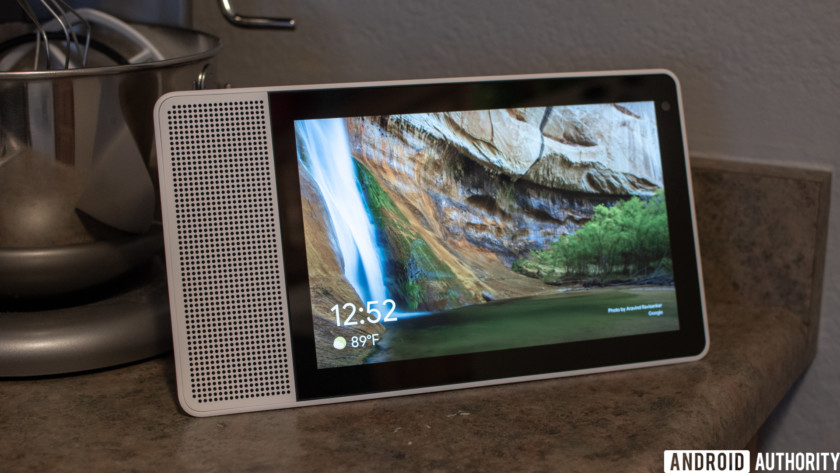 The Lenovo Smart Display is probably one of the most modern-looking pieces of smart tech you can buy right now. The device’s 8- or 10-inch screen is the main attention grabber, but the speaker grill on the left creates a unique asymmetrical shape. I’m a fan of this design, but others might not be.

While I’m a fan of the Lenovo Smart Display design, it’s easy to see why others might not be.

Around back, the Smart Display features an angular design to house its internal components (Snapdragon 624, 2GB of RAM, 4GB of storage) and prop the device up. The unit sits best in a landscape orientation. The product’s design allows it to sit upright, but Google hasn’t actually implemented a portrait orientation for Smart Displays — at least not yet. Currently, the only time the screen can reorient itself is during Google Duo video calls (more on that below).

Other than the size of the screen and body of the Smart Displays, the only real difference between the 8-inch and 10-inch models is the material on the back of the device. The rear of the 10-inch variant we reviewed is made out of bamboo and the 8-inch unit sports a grey soft-touch material. 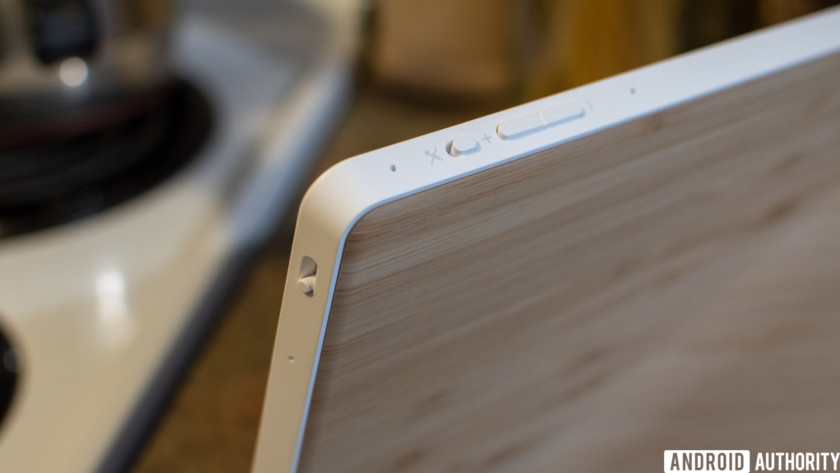 While I’m personally enamored with the bamboo look, it might not fit the style of whichever room you plan to keep the Smart Display in. My unit primarily sits up against a wall, so I rarely see its back anyway.

The Smart Display is almost entirely controlled by voice, though there are still physical buttons on the edge of the device. The volume and mic mute buttons all feel premium and provide a nice tactile response when pressed.

One small detail on the front of the Smart Display is the 5MP camera. At the time of publishing this review, the only use for this is to place video calls through Google Duo. Overall, the video quality is pretty decent and gets the job done.

Of course, we would like to see Google and third parties use the camera more. The search giant could at least include a camera app to let people snap selfies or shoot short video clips, or even just allow companies like Microsoft to add Skype integration. 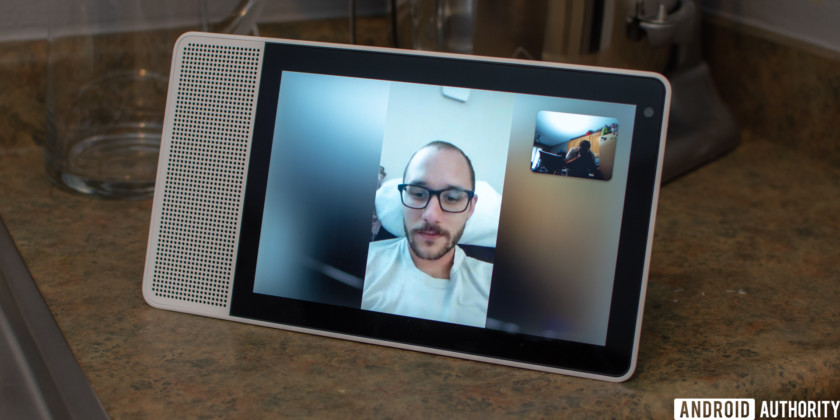 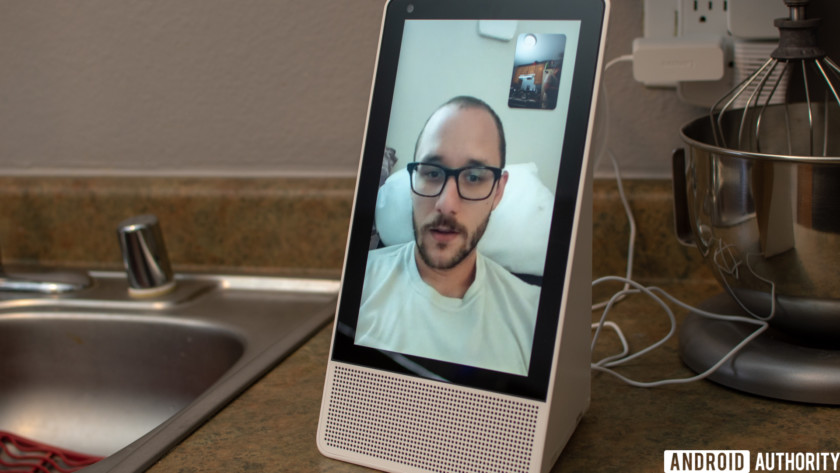 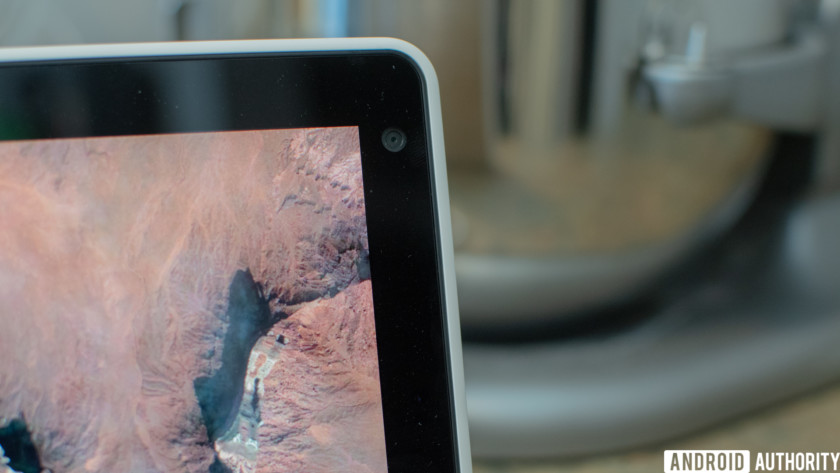 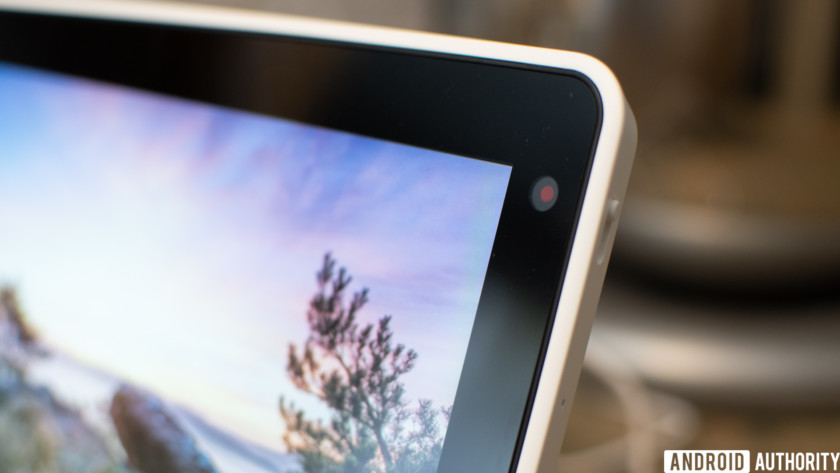 For privacy reasons, Lenovo included a switch that moves a physical cover over the lens and turns off the camera.

For obvious privacy reasons, some users won’t love that the device’s camera is seemingly always watching you. Thankfully, Lenovo was wise and included a switch that not only turns off the camera but also moves a physical cover over the lens. We want this to be a standard feature on all future Smart Displays.

The Lenovo Smart Display runs on a new operating system Google calls Android Things, which is like a pared-back Internet of Things version of Android proper. By starting fresh, Google’s built an experience from the ground up for Google Assistant.

Speaking of that, Google Assistant primarily drives everything on the Lenovo Smart Display. It’s the same Google Assistant you may already know from your phone, so there’s no additional learning curve. Most interactions with the Smart Display will be through the use of the “Hey Google” or “Okay Google” hotwords.

Touchscreen control is also a vital component of the experience once you dig into the visual response provided by the Assistant. You’ll be able manually adjusting a smart light bulb’s brightness and scrolling through a recipe, among other things. 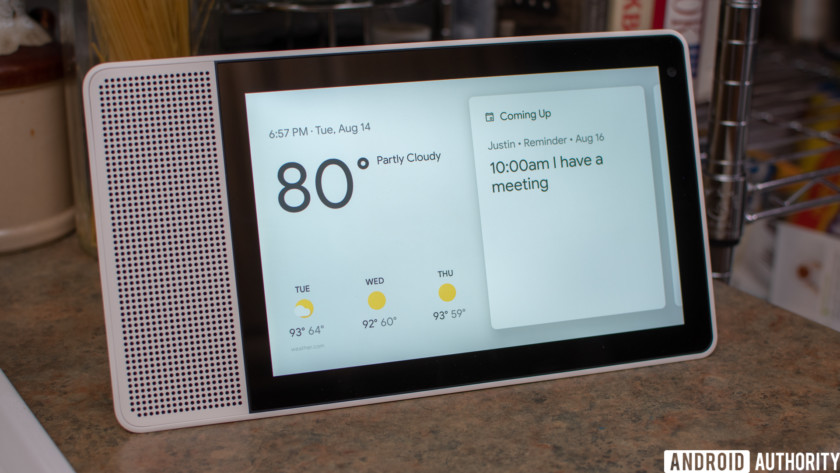 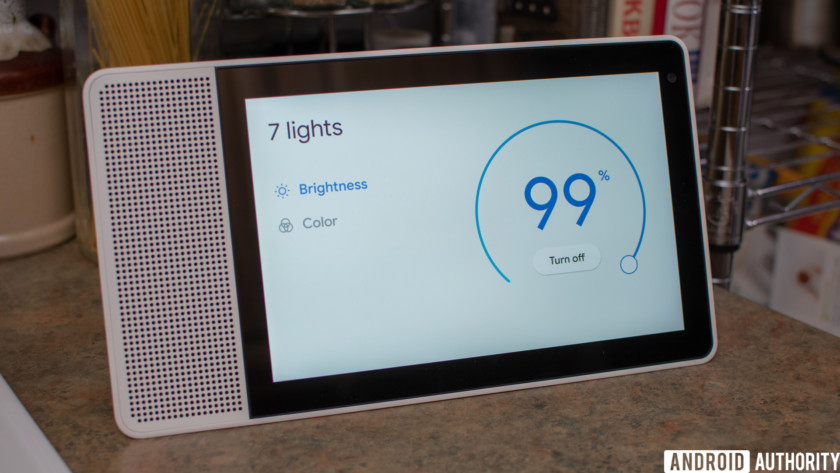 The touchscreen can also navigate the Smart Display’s home screen. After tapping on the device to exit the screensaver, the gadget will present you with the weather, any upcoming calendar appointments or reminders, suggestions from services like YouTube and Spotify, and much more. I almost never visited this page, though it was handy for finding new Spotify radio selections.

Even though Smart Displays and Google Home smart speakers might have a similar feature set (ignoring the screen), they are not the same thing. You can read about the differences here, but to summarize, features like audio grouping and Continued Conversations aren’t available on the Smart Display.

Up next: Google slowly bringing smart display features to smartphones

This distinction between the two products is one Google can either minimize or continue expanding. Considering Smart Displays are seen by many as a Google Home with a screen, I think it’s wise to bring the two under one roof and avoid further confusion.

One other disappointing aspect of the Smart Display is its limited Chromecast support. I found it pretty annoying that I could cast YouTube and Play Movies to the unit, but not Netflix. While this is admittedly a pretty minor downside to the Smart Display, for those like me that watch content while in the kitchen, Netflix’s absence is noteworthy. This is more a Google issue than a Smart Display one, so maybe it will be fixed at some point. 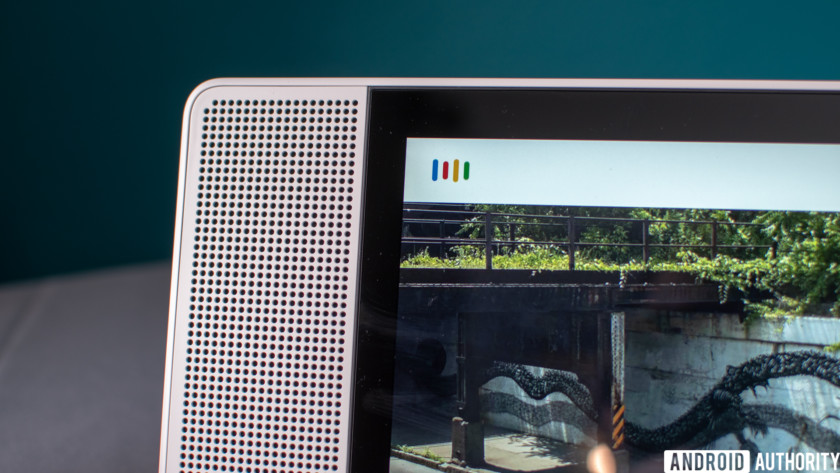 I occasionally found my Smart Display took longer than normal to process a command. I don’t know if this has to do with the 2GB of RAM. Sometimes I could tell the Smart Display heard what I said, but it took a good five to 10 seconds to respond. Thankfully, this didn’t occur too often, but it’s something I hope Google addresses in the future.

All software updates to the Lenovo Smart Display will be handled by Google.

All software updates to the Lenovo Smart Display will be handled by Google. The company is clearly invested in Android Things’ future, so expect additional features and support for years. 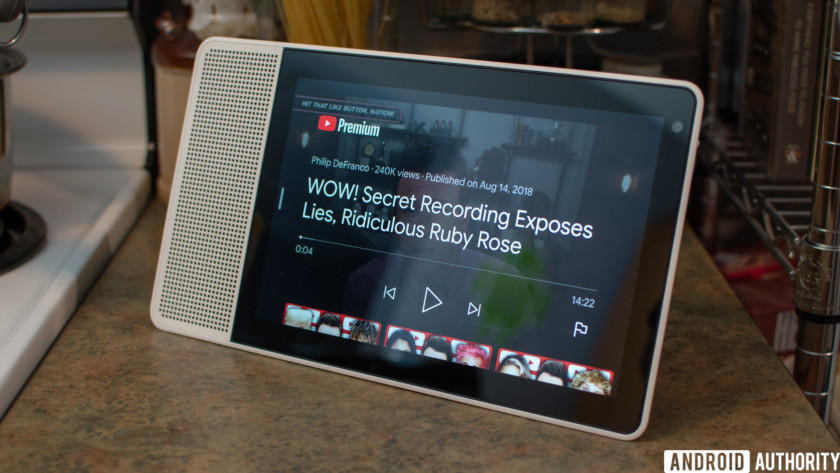 Because I mostly use the Lenovo Smart Display to listen to music throughout the day or watch videos while cooking dinner, I am continually looking at the screen. In the two weeks I’ve used the Smart Display, I was never disappointed by the visuals and quite enjoyed what I watched.

If you get up close to the display and look, pixels are visible. However, this device isn’t meant for prolonged use, so most will never notice these details.

Throughout the Lenovo Smart Display review period, I used it for a variety of audio including music, movies, YouTube videos, Duo calls, podcasts, news, and voice searches.

Both variants of the Smart Display include a 10-watt speaker with two passive tweeters. From our testing, this is great for listening to the casual dialog of podcasts and TV shows, but the unit struggles when playing back audio with a lot of low-end and bass. Android Authority‘s own Lanh Nguyen handled our Lenovo Smart Display review on YouTube and found the speaker distorted at max volume when playing music with a lot of treble. I didn’t experience this on my unit. 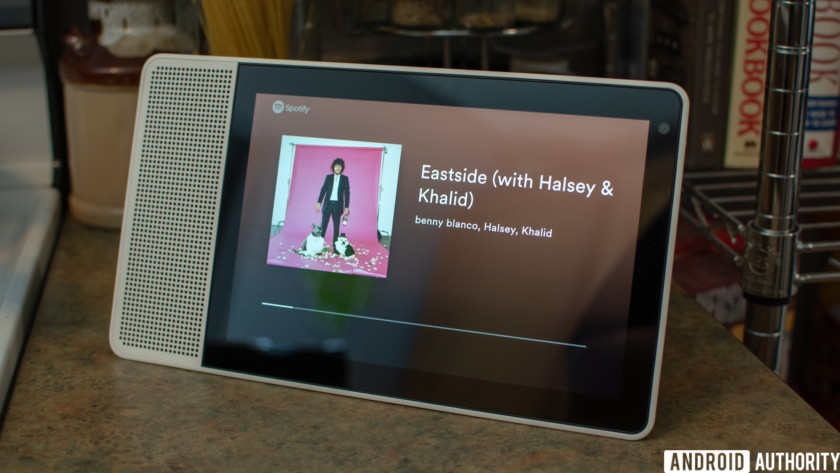 Think of the Lenovo Smart Display’s speaker as something that will get the job done but won’t blow you away.

The Lenovo Smart Display’s speaker will get the job done, but it won’t blow you away. If sound quality is the make or break feature for you, it’s probably wise to hold off until JBL releases the Link View.

Lenovo Smart Display review: Should you buy it?

Smart Displays are an entirely new product category for Google. Companies like JBL and LG have shown off upcoming devices, but Lenovo is first to actually release one. As such, we don’t really have much to compare this to.

Despite this, the Smart Display itself was everything I wanted it to be and more. While it’s not a Google Home, it did 90 percent of the tasks I expected it to and provides rich visual information on top of the queries and commands that I give it. I find this incredibly valuable, and a valid reason to consider replacing my collection of Google Homes and Assistant speakers — or at least some of them. 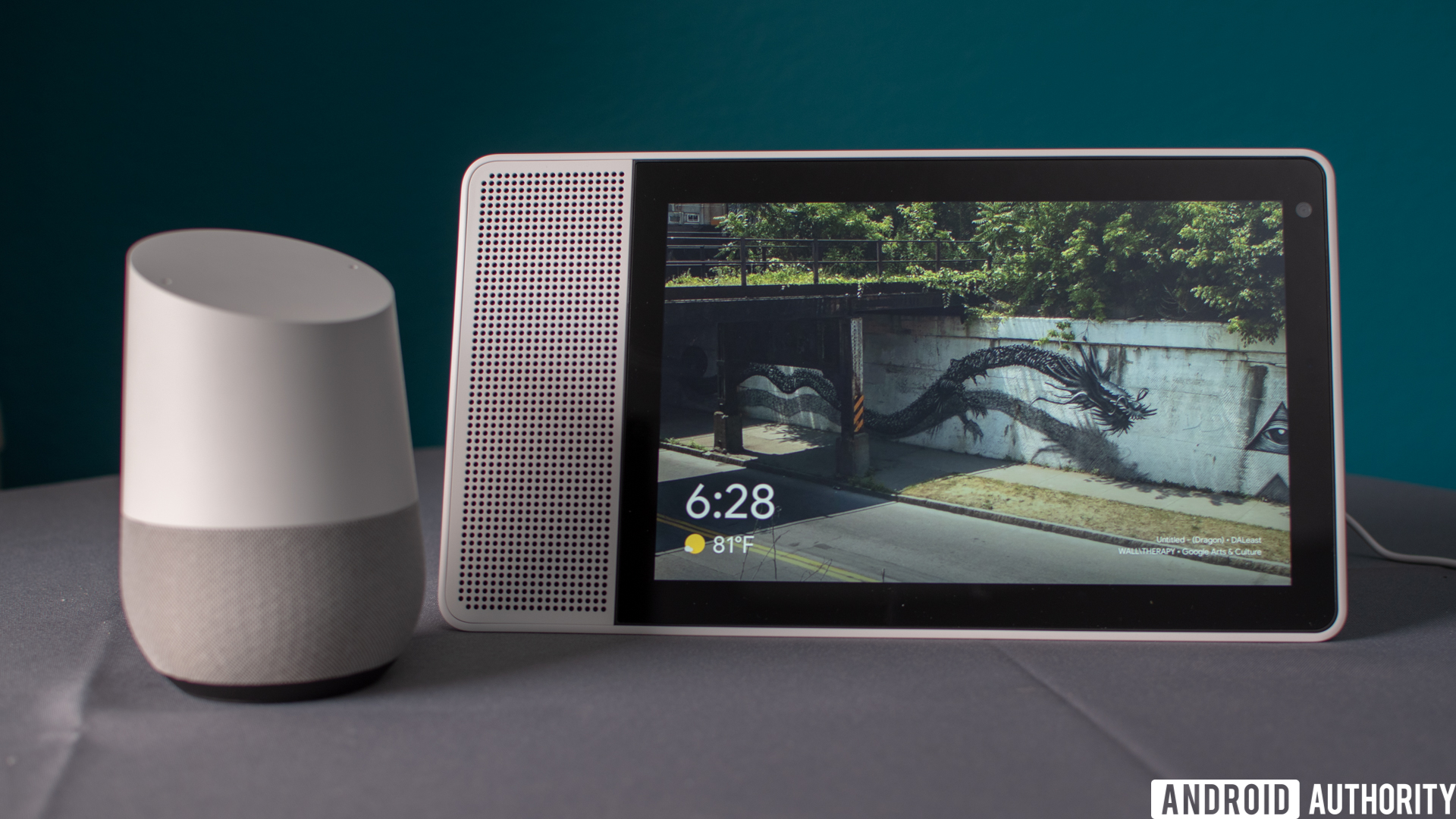 PSA: Smart Displays aren’t a replacement for your Google Home — at least not yet

The smart assistant war has been raging on for several years now between Google and Amazon. While everyone has their preference between the Assistant and Alexa, Amazon has had a leg up in regards to …

If the screen will benefit your needs, you understand its limitations, and acknowledge this is the first product in an entirely new category, I would absolutely recommend the Lenovo Smart Display. In time, Google will roll out new features and bring more functionality to the platform — the device should only get better over time. The Lenovo Smart Display sets a high bar for any upcoming competition.

The 8-inch Lenovo Smart Display costs $199, while the larger 10-inch model will set you back $250. I enjoyed having the larger variant in my kitchen because I watch a lot of TV and movies there, but the 8-inch model makes more sense for other, less-trafficked areas of your home.