JBL Xtreme 2 review: Plenty of power for your summer and more The JBL Xtreme 2 is the follow up to the initial JBL Xtreme speaker that sits in between the JBL Flip and JBL Boombox series of Bluetooth speakers.

The JBL Xtreme 2 is for consumers who want something more powerful than the JBL Flip speaker but not quite as large or expensive as the JBL Boombox. JBL was kind enough to provide us with one for review, so keep reading to see how it stands up and if it’s the right speaker to rock your summer.

The JBL Xtreme 2 does not differ in design from most other JBL Bluetooth speakers. It uses a cylindrical body covered in a fabric with visible bass radiators on the sides. I have the Midnight Black version for review but it also available in Ocean Blue and Forest Green.

There are two rubber feet on the bottom in order to keep it upright but they are a little on the narrow side. I found they didn’t always keep the speaker from rolling over on uneven surfaces. However, if you’re only placing it on a table or flat ground then this shouldn’t be an issue.

For this being JBL’s middle of the road speaker it is still quite large and heavy weighing in at a little over 5lbs. There is no comfortable way to carry this speaker with one hand, so it’s a good thing it comes with a carrying strap. The strap is high quality and connects to the speaker via two metal loops. 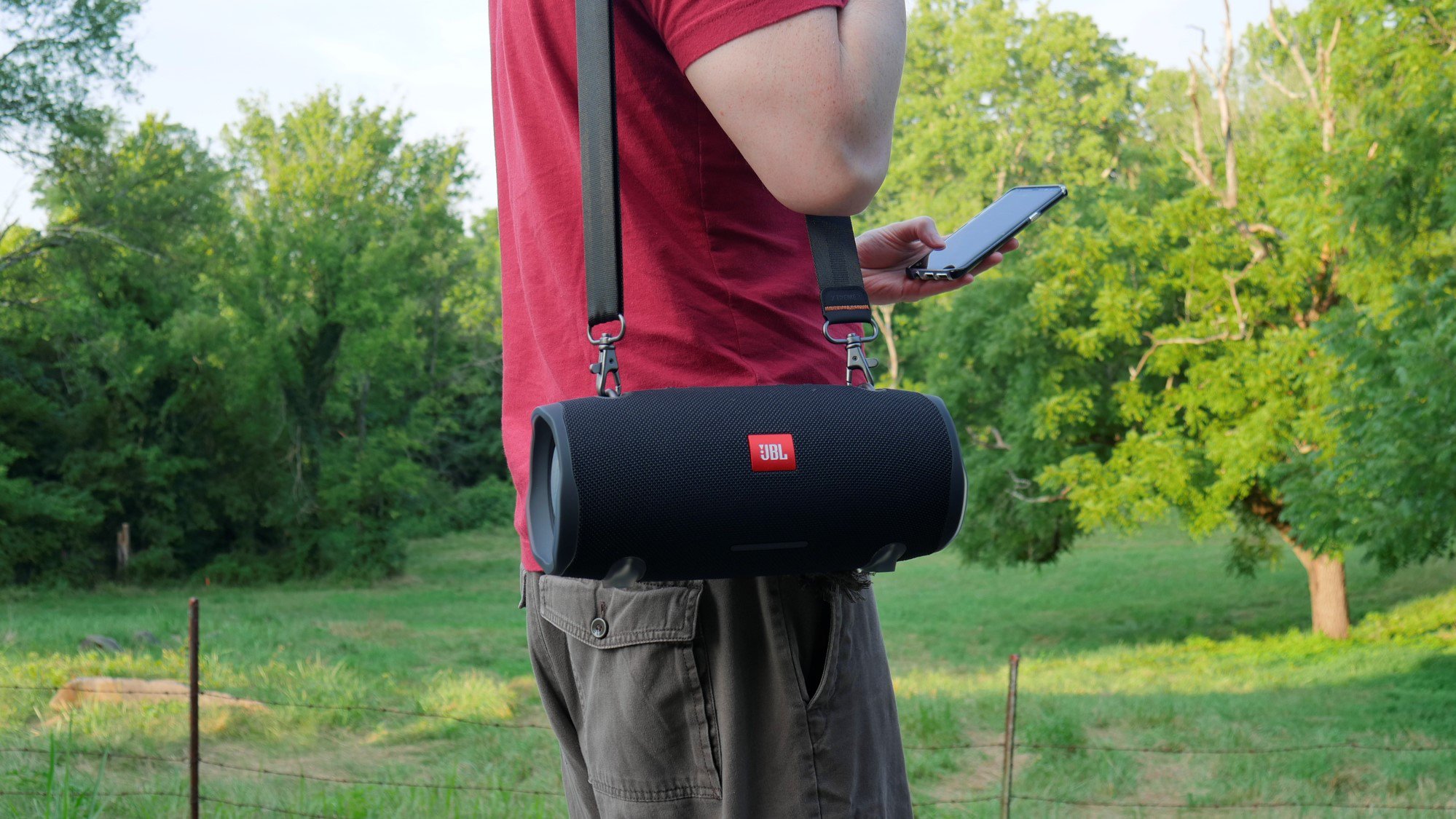 While the strap makes carrying the JBL Xtreme 2 more convenient, unfortunately, it lacks sufficient padding and rubber to prevent slipping. Due to this fatigue sets in much quicker on your shoulder and you often feel like the speaker is going to slip and fall. If there were any doubt that this is a party speaker then the included bottle cap opener on the strap should put that to rest. All in all, it works but it is not exactly perfect.

Along the top are buttons for Bluetooth pairing, volume down, power, Connect+, volume up, and play/pause. All the buttons are responsive and work well with the play/pause button also allowing you to skip tracks when pressed twice. There is no way to go back to the previous track though. 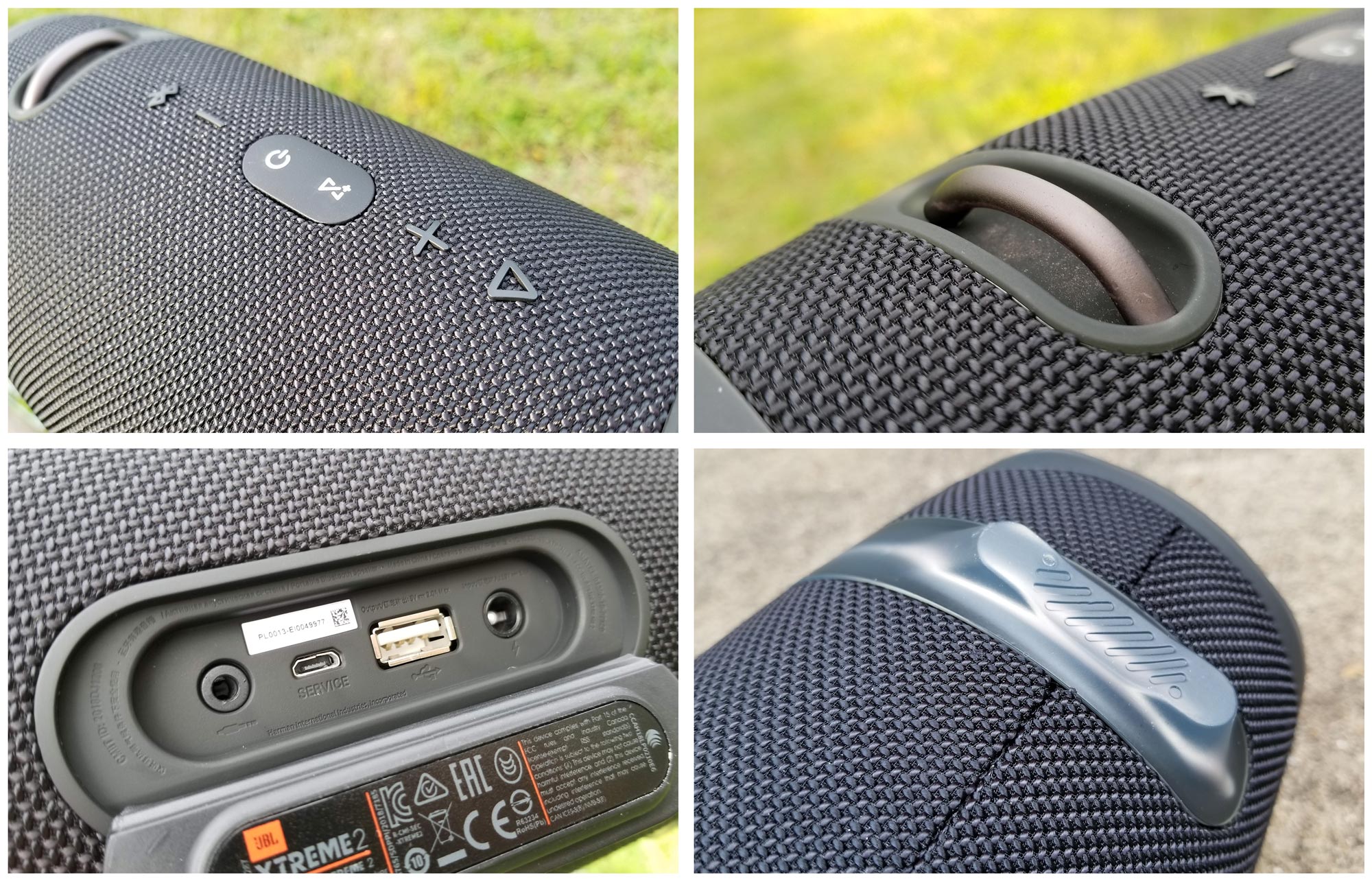 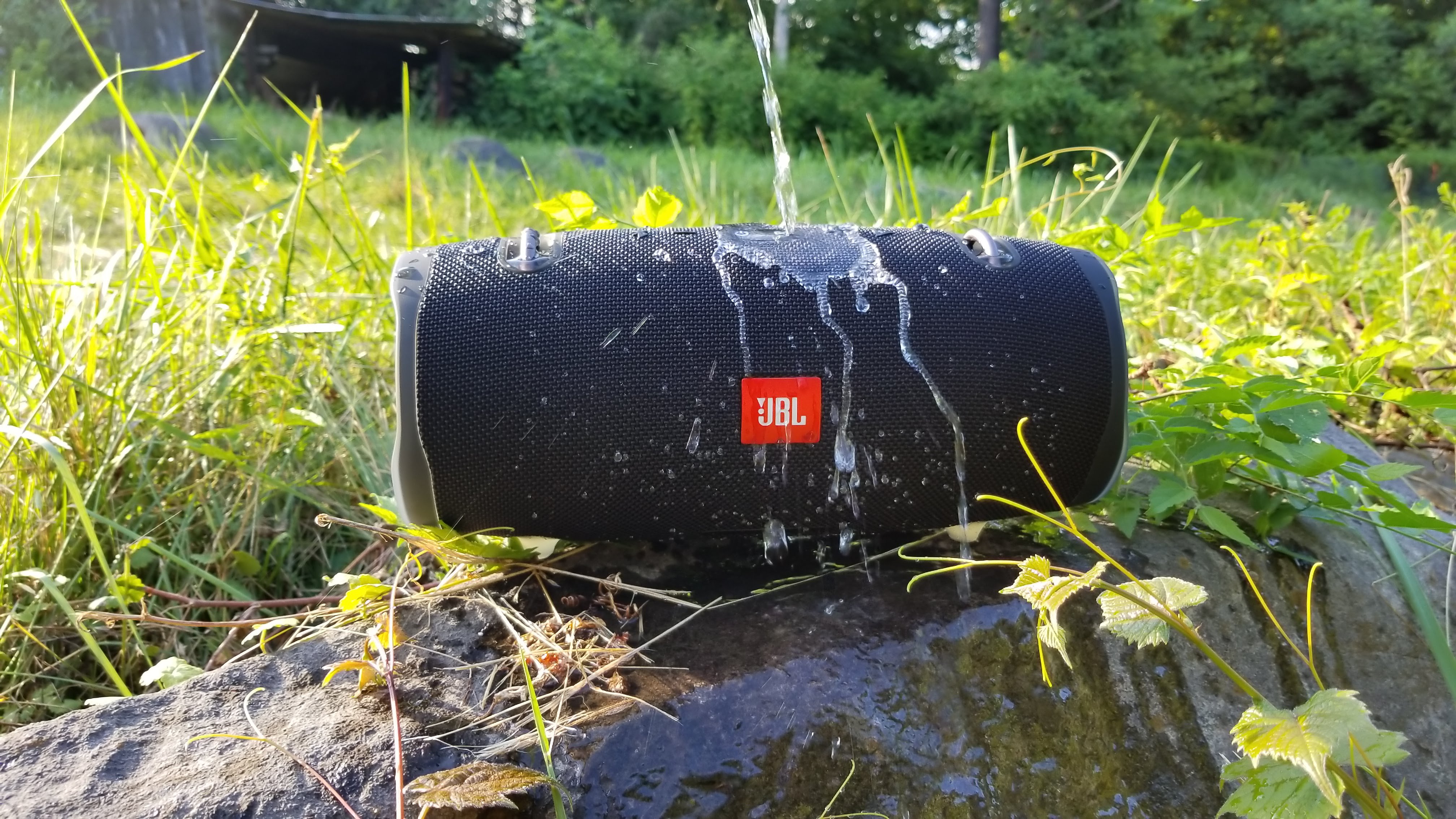 Included under the door are a 3.5mm jack, a power port, USB port, and micro USB port for service only. Having a dedicated power port was a little disappointing because it requires a special charger you must use over using a more common micro USB charger.

To be fair, the JBL Xtreme 2 houses a rather large 10,000mAh battery and the dedicated port provides a way to charge faster. Thanks to this large battery the full-sized USB port can be used to charge your phone or tablet. This is a great feature that really comes in handy when you’re on the go with your speaker. Although, I’d much rather see JBL include a USB-C port for faster charging as well as power output for charging.

The JBL Xtreme 2 is using Bluetooth v4.2 and has exceptional range when outdoors without any obstacles. I was able to get nearly 50ft. away with a steady connection and able to hear music. However, I noticed some interruptions in the music after reaching 30ft with some obstacles in between. This is similar to most other Bluetooth speakers I’ve used in the past though.

There is a JBL Connect app for Android and iOS that is used for updating the firmware and adds some new tricks to JBL speakers such as the JBL Xtreme 2. In my case, I found the Xtreme 2 needed a firmware upgrade immediately to version 1.6.0. Anyone out there purchasing one might want to check after setting it up.

The app also allows you to control the audio feedback sounds, speakerphone functions, and includes instructions for the Connect+ feature. I was able to use Connect+ with two other JBL speakers without using the app though. The JBL Connect app itself is mainly only useful for updating the firmware and switching the purpose of the play/pause button to activate your voice assistant.

Unfortunately, a feature you would expect to be present such as an equalizer is nowhere to be found. Personally, I enjoy the way the speaker itself is tuned, but this would be a welcomed addition to JBL’s app and make it more useful and win over more users.

Sound quality is one of the most important factors when it comes to a Bluetooth speaker. What good is a speaker after all if it doesn’t provide your ears with quality sound? Thankfully, the Xtreme 2 delivers first-rate sound, utilizing two 2.75-inch woofers for the low end and two 20mm tweeters to handle the treble.

Using this combination supplies your ears with a nice range of sound incorporating pounding full bass while not overpowering the high notes and vocals in songs. The nice balance between the treble and bass helped with instrument separation and preventing instruments from getting lost or becoming muddy. 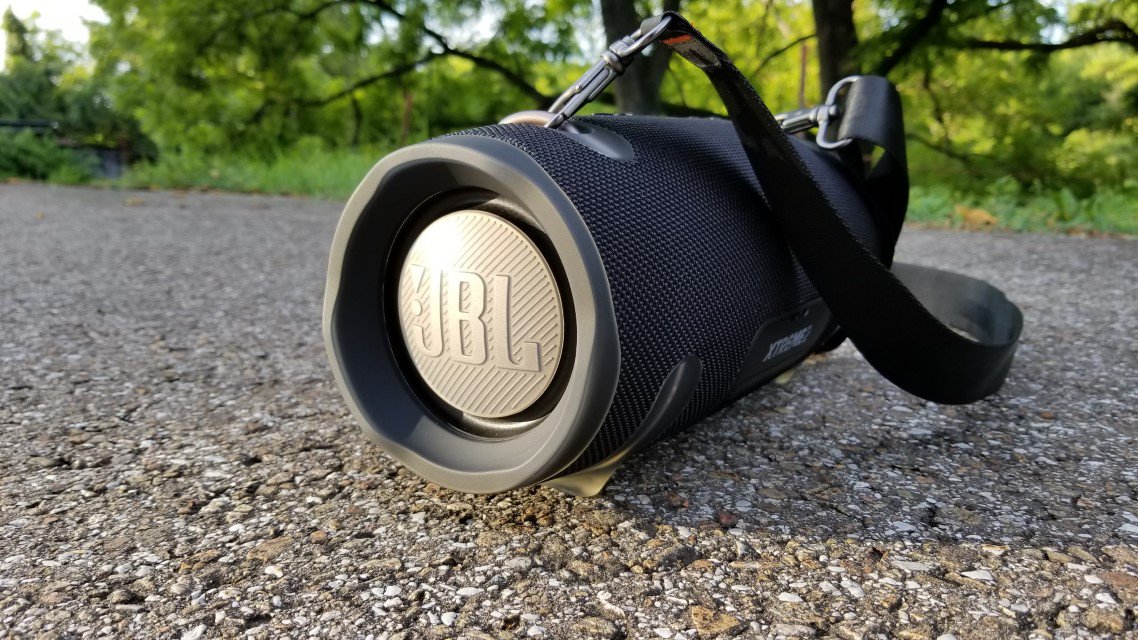 My only complaint in regards to the sound quality is when the volume is at its highest levels. When approaching 80% volume and above the high end overwhelms the bass making it almost disappear. Fortunately, with a speaker this loud I found myself rarely turning it up over 50% preventing this from being much of an issue.

Battery life on the JBL Xtreme 2 is rated for 15 hours to get you through a full day. In my experience, the speaker was even better than it claimed. After listening to the speaker for approximately 14 hours over a weeks time, it reports the battery is only half drained from a single charge. Obviously, this will all depend largely on what volume you listen to the speaker at and I’ve used it mostly between 20 and 50 percent.

JBL has delivered a durable waterproof speaker capable of big sound with the Xtreme 2. Between the sound quality, battery life, and extra features you can’t really go wrong with it. However, it’s also a bit on the pricey side starting at $300 and most likely out of many people’s price range. If you’re looking for something more affordable you might opt for JBL’s smaller Flip 4 currently priced at $85 on Amazon.

The Flip 4 trades in the more powerful bass and louder sound for a more budget-friendly portable speaker that still sounds good in its own right. Still, I’m certain there are others out there wanting something even larger and louder than the JBL Xtreme 2. For them, I say give the JBL Boombox a try. It is the larger, louder, longer lasting of the trio but will also cost you more at $441.