Surface Go vs. Chromebooks: Which should you buy?

Chromebooks are taking over, and Microsoft’s new Surface Go aims to halt that. 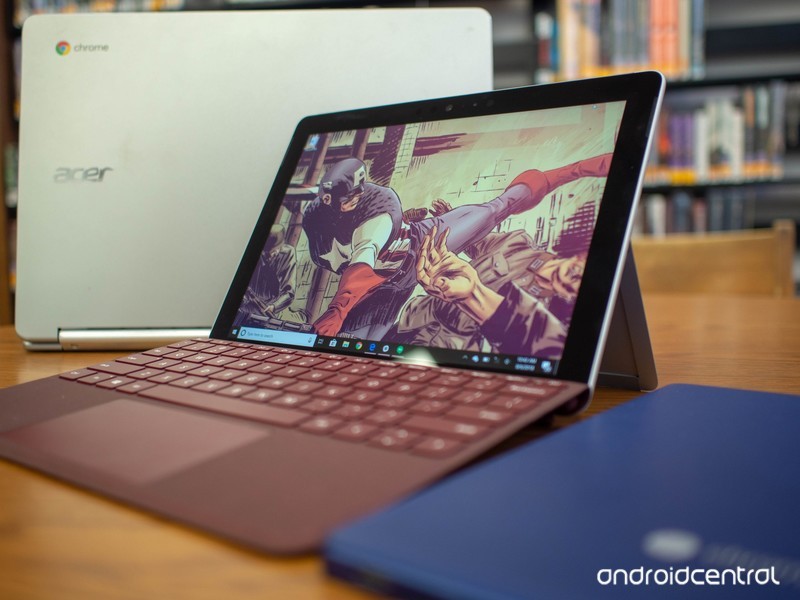 When a company makes a computer “for schools” these days, what that really means is that product is positioned to compete with Chromebooks.

Google’s lightweight OS and the inexpensive hardware it tends to live in has been largely responsible for the first reals signs of growth the standard PC market has seen over the last two years, due in no small part to the popularity of these products in school settings. Earlier this year we saw Apple try to appeal directly to this market with a less expensive iPad packed with educational software, and now it appears Microsoft is going the same route with its new Surface Go tablet.

Microsoft’s Surface line has always been exceptional, but you pay for the privilege of owning something this nice and that makes buying a dozen for a classroom a little complicated. With the base model Surface Go launching at $399, Microsoft is hoping it will appeal to this market. But how does this experience stack up against a Chromebook? Let’s take a look! 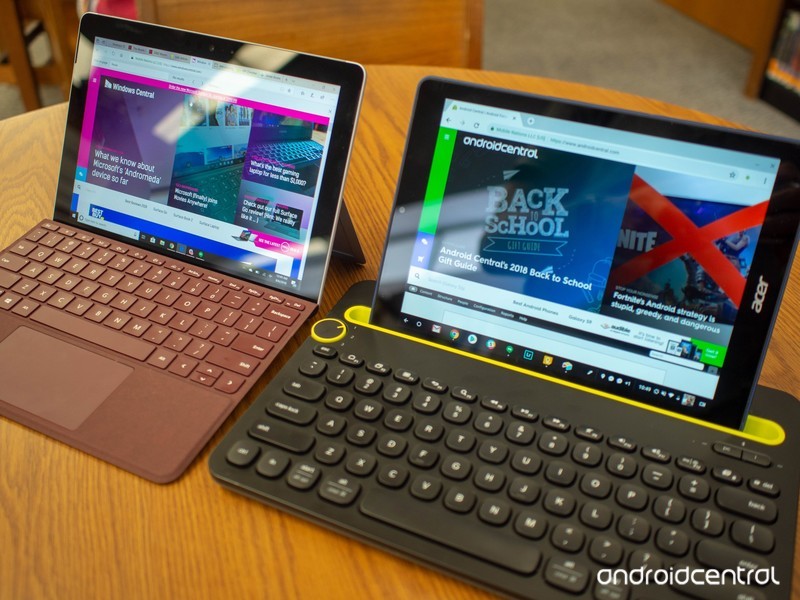 The back hinge is better than ever, allowing me to prop up on my lap or on a table at just about any angle. The power and volume buttons on the top of the tablet are rigid, with a satisfying click as you press them in. On the right side, you have the magnetic Surface charging port, a USB-C port, and a headphone jack.

Across the bottom, you’ll find the magnetic connectors for the keyboard cover, which does not come included in the $399 price tag. Microsoft offers several options for the keyboard cover starting around $100, but I went with the slightly more expensive $130 Alcantara cover in maroon. Because when you are offered an accessory in Alcantara, you buy it. End of discussion. 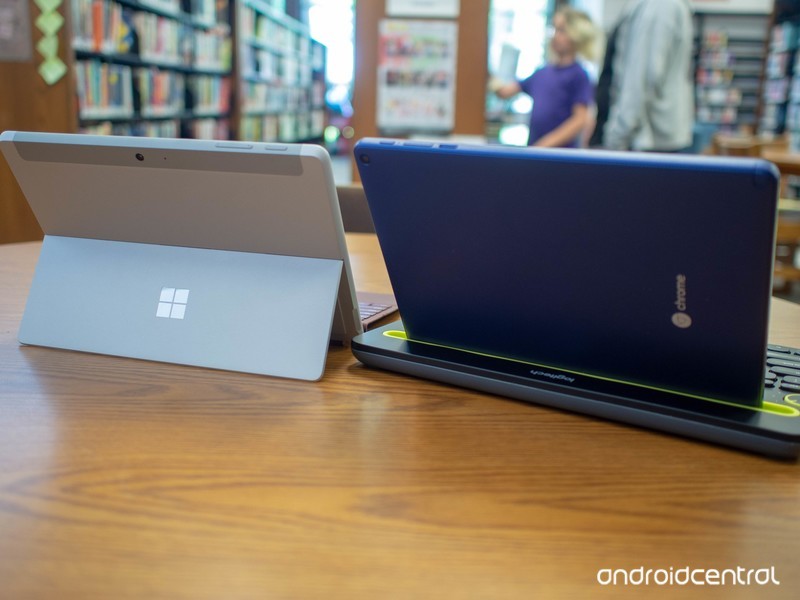 There are no Chromebooks which look and feel this nice in this price range. Google makes the infamous Pixelbook, but the $1,000 price tag hardly makes sense to compare here. In this price range, Chromebooks tend to be black or white plastic. The $539 HP Chromebook X2 is almost exactly the same price as a Surface Go with a keyboard attached, and you get the benefit of a 13-inch display over the smaller 10-inch Surface Go.

Naturally, that size increase means a weight increase though, which makes the Surface Go a more portable option. Another solid comparison is the Acer Chromebook Tab 10, which is a standalone Chromebook tablet with no keyboard priced at $339. Comparing Acer’s design to what Microsoft has created with the Surface Go is mildly akin to comparing a cardboard box with wheels to a Tesla. To say Microsoft’s design in this category is unparalleled really feels like I am underselling it.

To say Microsoft’s design in this category is unparalleled really feels like I am underselling it.

Under the hood, the Surface Go is packing a fanless Pentium Gold CPU with 4GB of RAM and 64GB of onboard storage. While most Chromebooks tend to lean on lower powered processors, the specs sheet on your average modern Chromebook is fairly comparable to the Surface Go. The same goes for the display, Microsoft’s 1800×1200 resolution display with touch input is pretty close to what you’ll find just about everywhere else these days. Where the Surface Go really stands out is the Surface Pen, which you also have to buy separately. Several Chromebooks come with pen input, but none of them offer the accuracy or quality of what Microsoft has built with the Surface Pen.

Battery life on the Surface Go does not hold up to your average Chromebook. Microsoft claims “up to 9 hours” with the Surface Go, where most Chromebooks push 10-12 hours of use with no problem. But again, this is a compromise made to achieve the size this tablet PC currents sets in. If there was a Chromebook made in the shape and size of a Surface Go, it wouldn’t likely be capable of the same 10-12 hour push. I’m not sure how much that matters to people buying things for classrooms, but for someone like me who appreciates having an ultraportable machine to take places the size and weight really does matter. 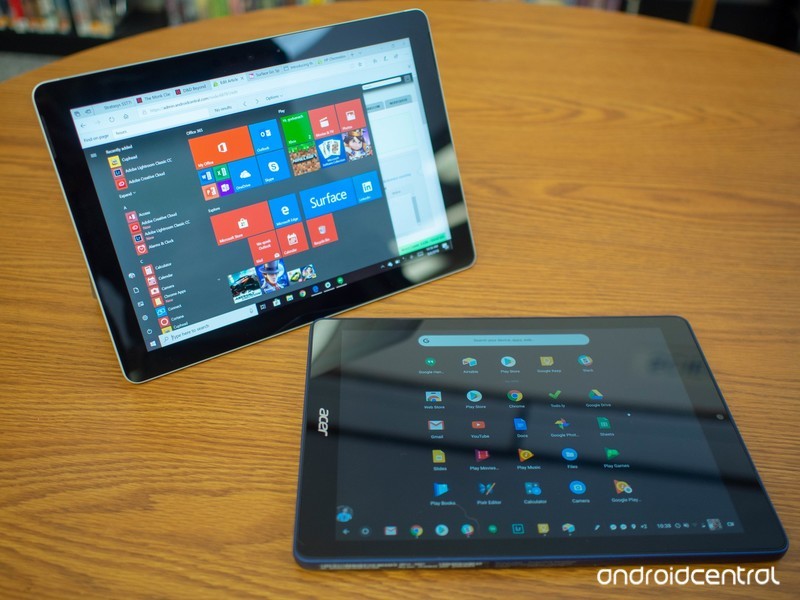 Apps are all that matter.

When you set up a Chromebook for the first time, it takes about three minutes. When you already have a Google account and have already used a Chromebook before, that set up time is cut in half. Google’s minimalist approach to Chrome OS makes it so ridiculously easy to set up a Chromebook it makes everything else feel slow and terrible, and the Surface Go is no exception. Setting this computer up the first time took almost 20 minutes, and when that was done what I got was a version of Windows that was almost useless to me.

Windows 10 S doesn’t allow you to install anything that isn’t in the Microsoft Store, and the contents of the Microsoft Store still isn’t great by modern standards. Fortunately, switching from Windows 10 S to Windows 10 Home is much easier than it was when the Surface Laptop was released, but by the time this computer was ready to actually be used a full half hour had passed. 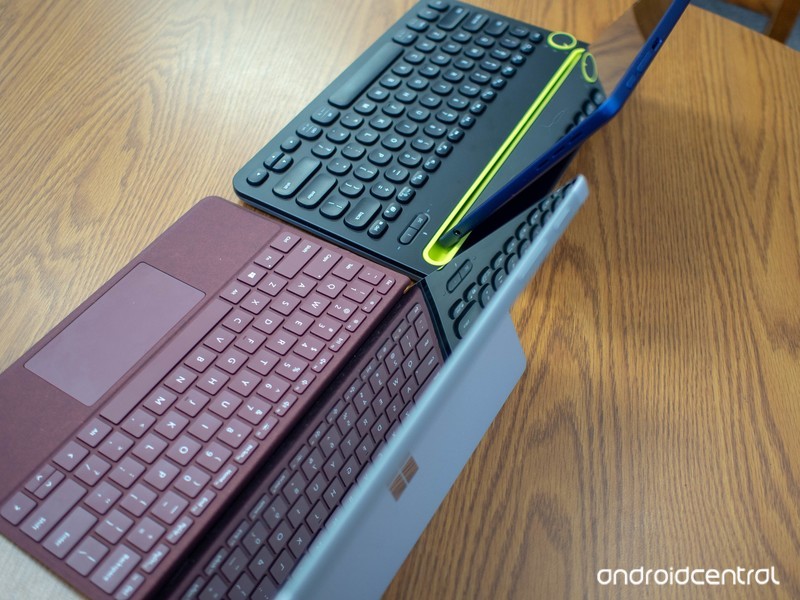 You’ll find a lot of reviews for the Surface Go saying very nice things about the performance of the computer throughout daily use, but an important caveat of those reviews is they are all using the higher end and more expensive version of this machine. The base model claims to be faster than the Surface 3, but my testing yielded different results. If I had three or four Chrome tabs open with Slack running in the background, a fairly standard set up for my workflow, the Surface Go would slow down considerably.

In some places, there would even be a lag between my pressing keys on the keyboard and the letters appearing on the screen. Running the same test with Edge instead of Chrome, I was able to have five tabs open before the same problem would occur. This computer is clearly not a workhorse, but I consider the workload I put this machine under to be quite modest. And, to be frank, I can do the exact same thing on a Chromebook or an iPad Pro and never see a moment’s problem.

Chrome OS is much closer to a mobile operating system than Windows, and that reflects in how apps look and feel.

Part of the difficulty in comparing a Surface to a Chromebook is the way apps run is so very different. On a Surface, everything is a PC app built for Windows and not necessarily optimized for lesser processors or systems with less RAM. On a Chromebook, everything is either built to exist as a mobile app and optimized for a mobile processor or exist in the highly optimized version of Chrome built for this OS. Chrome OS starts out as a browser and lets you add things on, and the apps simply don’t need the kind of processing power you get from a traditional desktop CPU.

Because Windows is trying to fit a legacy experience into a modern hardware profile, these software struggles can be exaggerated based on how modern or optimized the apps you need are. Chrome OS has the opposite problem, the apps are all going to run pretty well, but because most of them are built for phones they don’t always look great on a giant tablet screen and in some cases refuse to orient correctly to the angle you are holding your Chromebook. 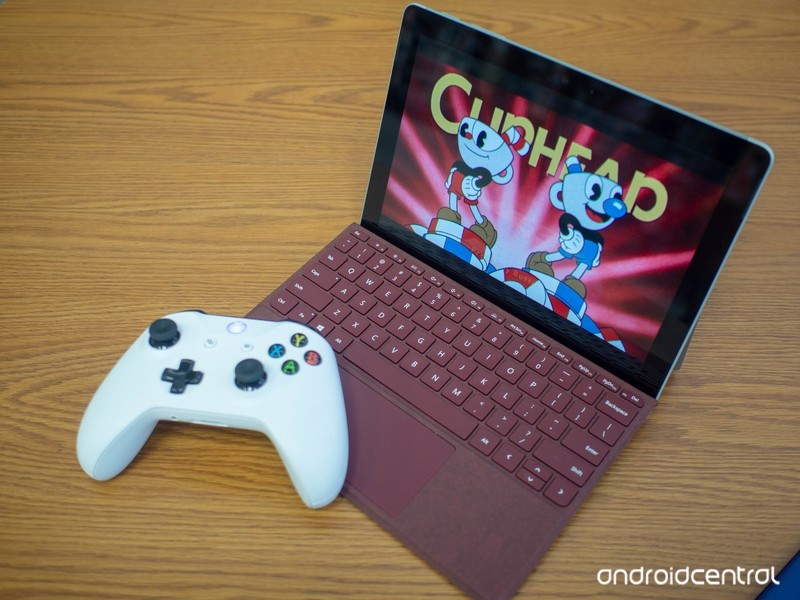 The benefit to Microsoft’s legacy approach is clearer when doing things you simply can’t do on a Chromebook. I’m currently running a full version of Adobe Lightroom on the Surface Go, where I have to use the mobile-focused Lightroom CC on my Chromebook. I can use either fairly interchangeably, and Lightroom on the Surface Go is fairly slow when I’m processing multiple images, but having access to every feature is occasionally important to me, and is only possible with the Desktop version of this app.

A less niche example can be found in gaming. Through the Xbox Play Anywhere system I’m able to install the Xbox One game Cuphead on my Surface Go, pair an Xbox Controller, and play Cuphead literally anywhere and have that game feel exactly the same as it does on my TV at home. That obviously doesn’t work for every Xbox Play Anywhere game, but it does work on a significant number of games in the Steam Store, which is not something I can say for Chromebooks. This isn’t a great example for a school environment, but it makes me happy knowing I can pack a controller with me places and have a good time. 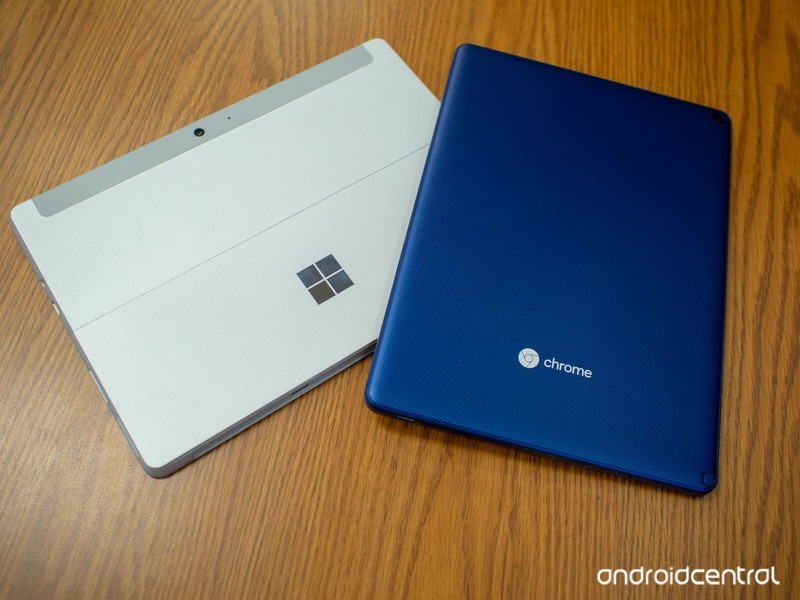 Surface Go vs Chromebooks: Which should you buy?

Overall, I am thrilled with this Surface Go. I think Microsoft has come a long way from the Surface RT, and really made something great for people who want something portable and a little less expensive than a standard Surface. This is a fantastic piece of hardware, and there are things about Windows 10 you straight up can’t replicate in Chrome OS.

That having been said, I wouldn’t recommend this base model to anyone. The model with 8GB of RAM is clearly the model people should buy, but by the time you add a keyboard you’re spending close to $700 and that just doesn’t fit the market. You can buy two of the Acer Chromebook Tab 10 units for the same price, and schools are going to notice that sort of thing when it comes to buying for a group. There’s also less overhead in setting up and maintaining a Chromebook, which is not a small detail for schools.

If you’re looking for a small, lightweight Windows machine there’s no doubt the Surface Go is the nicest option available today. But if all you want is an all-day portable workhorse on the cheap, you still can’t beat a Chromebook.

Check out the best Chromebook for your in our handy review guide!