Asus smartphones have had a rollercoaster ride in the Indian market. While the company saw some success with quite capable mid-range Zenfone devices in the past, Chinese players like Xiaomi and Lenovo almost drove the company out of the budget segment and the minds of consumers.

The new Zenfone Max Pro (M1) packs in a big 5,000mAh battery and aims to be a well-rounded budget offering. It’s looking to reclaim the under-15,000-rupee (~$225) category, fighting it out with Xiaomi’s Redmi Note 5 and Note 5 Pro, which for many are an automatic choice in this segment.

This latest smartphone has been developed for the Indian market, but can it take a slice of the pie? Let’s take a look.

For this review, I took a pre-release variant of the Asus Zenfone Max Pro (M1) for a spin. Through the review period of this lower spec’d variant — the one with 3GB RAM and 32GB internal storage — there was more than one firmware update, with focus on improving camera performance and adding features like support for VoLTE and face recognition. These updates will be baked into the devices that will go on retail, so you’ll get all that out of the box.Show More 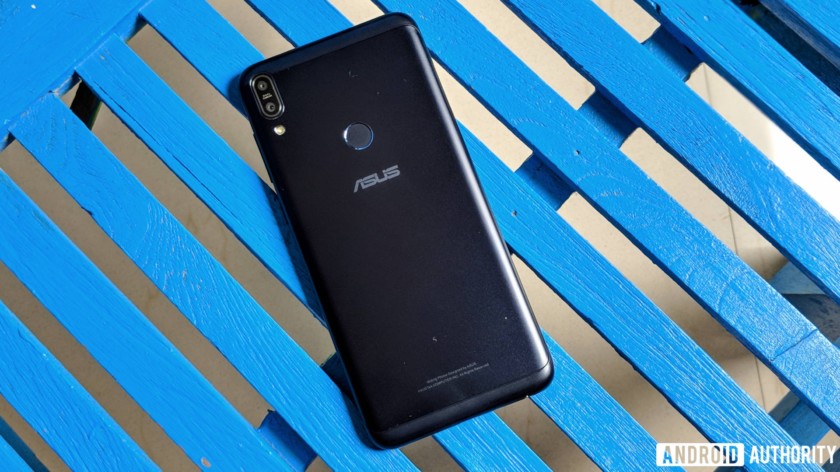 The Asus Zenfone Max Pro looks like most other smartphones in this segment, which isn’t necessarily a bad thing. The smartphone is solidly built and the aluminum frame gives it a nice structural rigidity. At 180 grams, it’s heavy and marginally thicker due to its large battery, but the additional heft gives a certain sturdy feel to the device.

The display has a tall 18:9 aspect ratio with rounded corners and narrow borders on either side. Asus claims it uses a durable, protective 2.5D curved glass but there’s no word on what kind specifically. Despite the slightly large dimensions, the phone is quite ergonomic and fits well in your palm.

The Zenfone Max Pro has a minimalist and functional design, even though there’s nothing special.

The rear metal plate has a soft matte finish which feels good but gets smudged with fingerprints a lot. I had to wipe smudges away between each shot when I took photos of the phone for this review, as they look quite pronounced on the dark exterior. One of the best design traits of the Zenfone Max Pro is the dual-camera module at the back is flush with the body with almost no camera bump. It looks quite neat.

Overall, the Zenfone Max Pro won’t win any design award, but the minimalist and functional design with good build quality would appeal to most users. 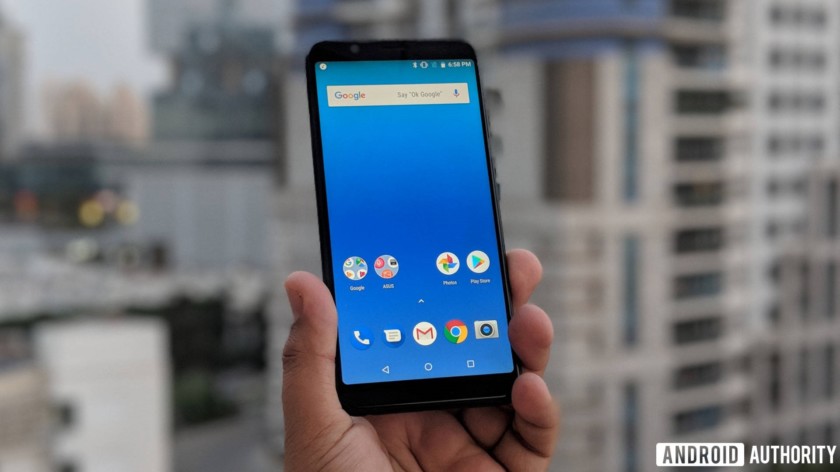 The Asus Zenfone Max Pro sports a 5.99-inch Full HD+ display with an 18:9 aspect ratio. There’s no notch here, thankfully. Asus claims the display’s LCD panel offers a contrast ratio of 1500:1 with a maximum brightness of 450 nits. There’s also an oleophobic coating to ward off those greasy fingerprint smudges.

The display is first-rate. It’s quite bright and the colors are vibrant. Even in bright summer afternoons, the outdoor screen viewing is pretty good. The viewing angles are great and better than most phones in this segment. Its contrast ratio is great, though still no match for an AMOLED display. 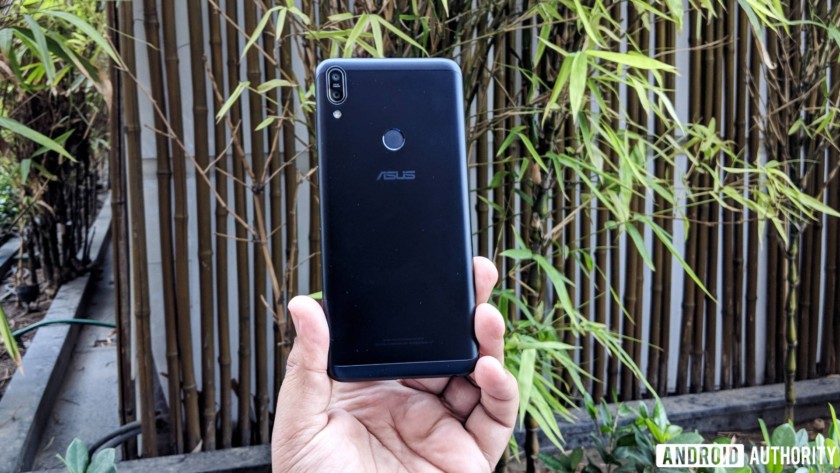 The Asus Zenfone Max Pro is powered by the Qualcomm Snapdragon 636, the same processor as the Redmi Note 5 Pro. The 14nm chipset apparently offers a 50-percent jump in performance over Snapdragon 625 because it uses Qualcomm’s custom Kryo cores to efficiently push more power.

For this review, I used the 3GB variant, and the phone performed quite well. Hardcore gaming, multitasking, and everyday shenanigans — the Zenfone Max Pro sailed through everything I threw at it breezily with its snappy stock Android experience. During extended sessions of gaming, it heated up slightly but not to a degree that would cause any discomfort.

The Zenfone Max Pro boasts a 5,000mAh battery, but it doesn’t offer exceptional battery life. A few other smartphones in the market manage to offer similar battery life with a smaller capacity battery in a smaller frame. For most users, the phone will easily last a full day of active use with enough juice left to carry over to the next day. It’s plenty, but I’d expect a software update to optimize the power consumption even better.

The phone comes with a bundled 2A/10W charger for fast charging that charges the battery from zero to 100 percent in less than three hours, which is quite good. 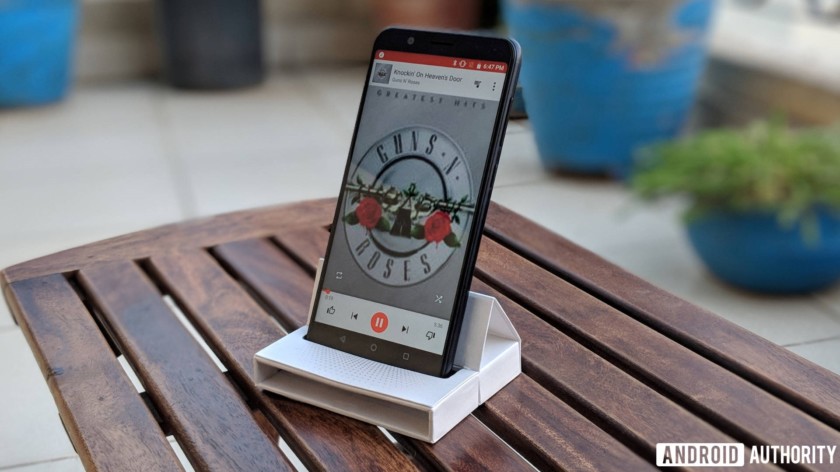 The Zenfone Max Pro supports Bluetooth 4.2 with Qualcomm’s AptX technology for clearer audio over wireless connections. Thanks to the built-in NXP amplifier and a 5-magnet speaker, the mono speaker on the Zenfone Max Pro is quite loud. For a budget smartphone, the Zenfone Max Pro has a pretty solid audio experience. To boost the audio even further, it comes with a Max Box accessory, which passively amplifies the audio without any electronics. It’s a plain vanilla cardboard and magnet setup, based on precision acoustics. While it’s gimmicky, it’s bundled free and music enthusiasts won’t complain.

Overall, Asus did quite well picking the latest innards and bundling it with stock Android for the Zenfone Max Pro. Even the 3GB variant should be enough for most people. Of course, power users and those who don’t mind spending the extra dough will appreciate the slight performance bump that 4GB of RAM would offer.

Although most of its competition is in the same boat, it is slightly disappointing to see a MicroUSB port instead of the USB Type-C on the Zenfone Max Pro. Of course, many people won’t mind, but it leaves a little sour taste. It’s a 2018 smartphone, after all.

The device supports dual SIM, with an extended tray that can take two nano-SIMs and a microSD card all at the same time. For a niche but vocal user base, this is an important consideration since they use two SIMs (mostly the second one for data) and hoard a lot of content, therefore requiring memory expansion. While you can use two 4G SIMs at a time, only one will run on 4G at any time while the other will be limited to 3G. 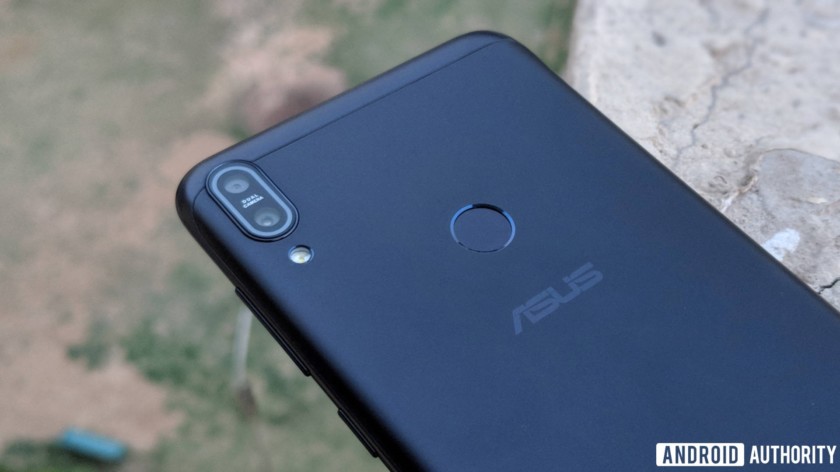 The Asus Zenfone Max Pro sports a dual camera setup at the back with a 13MP primary camera with f/2.2 aperture and a 5MP secondary camera for depth sensing.

In broad daylight, the smartphone manages to take some great shots. It manages to capture a large amount of detail and most shots are quite vibrant. The sharpness is hit-or-miss and often the white balance is way off. In low light conditions, it takes a while to lock focus, and once it does there’s considerable noise in the photos and the details get a little fuzzy. It is quite hard to manage a decent shot with HDR mode at night because there’s a lot of blur and loss of detail.

The depth mode works quite well for a budget smartphone. The edge detection is pretty good, and the blur is subtle, although often inconsistent.

The rear camera on the Zenfone Max Pro can record 4K video but there’s no stabilization option available. Whether shot at night or day, videos are good enough for sharing, but not much else. 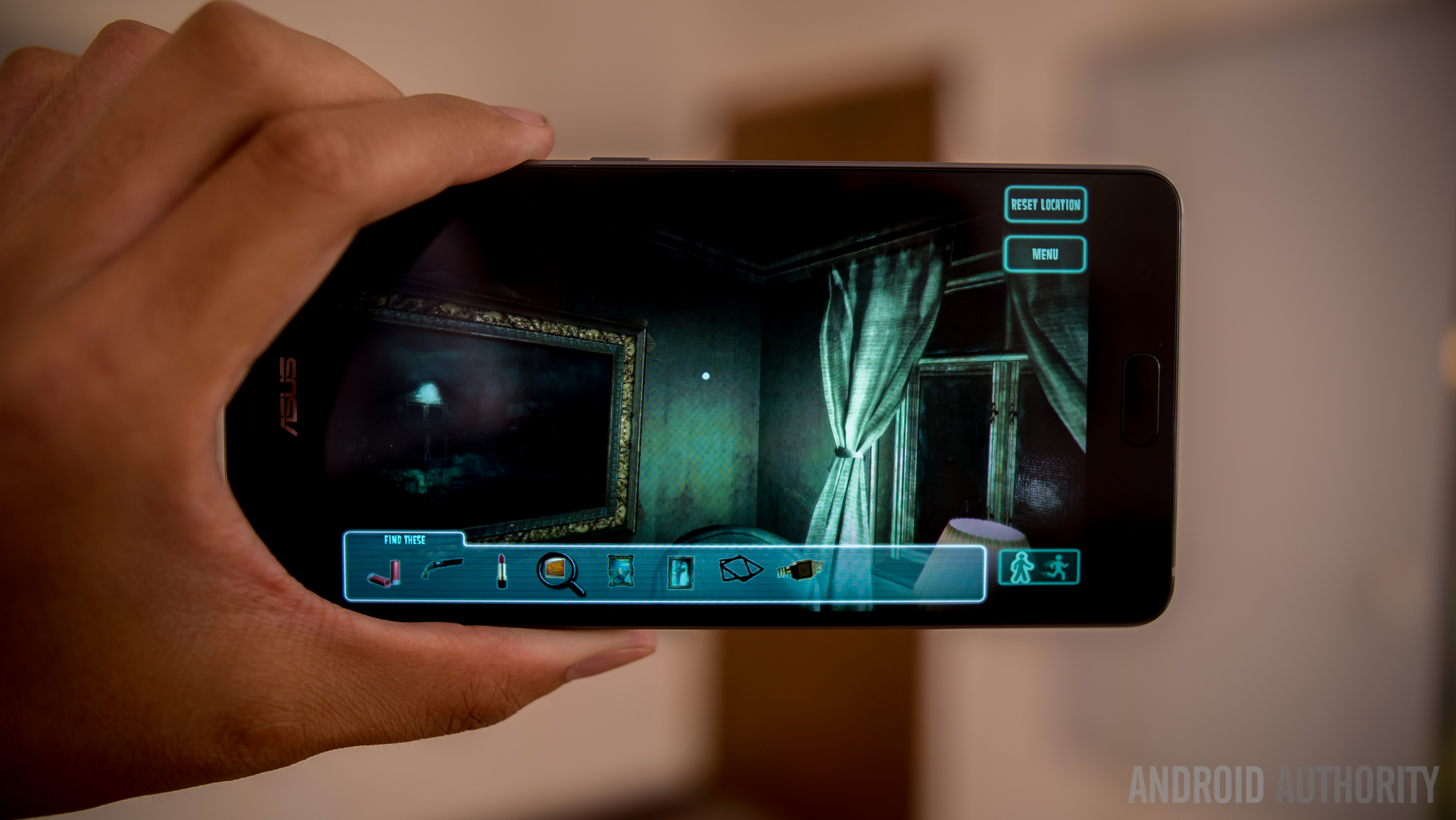 Hot on the heels of the launch of Xiaomi’s Black Shark gaming smartphone, Asus has appeared to confirm that it is working on a gaming phone of its own.

In an interview at the opening of Asus …

The front-facing 8MP shooter with an f/2.0 aperture manages to capture some really good selfies. There’s a good amount of detail and the colors and exposure are just right. The beautification also isn’t too overwhelming and doesn’t come off as artificial. The LED flash on the front is quite harsh — for most selfies, I preferred to keep it off.

The camera app on the Zenfone Max Pro is confusing and unintuitive. The controls aren’t well laid out, and simple toggles like flash are hidden under a menu instead of being accessible with a single tap. Asus should really overhaul the camera app to make it more appealing — in form and function.

The camera on most mid-rangers falls short especially in testing light conditions, and the Zenfone Max Pro just manages to scrape through. It’s a decent camera and better than most in the segment, but it doesn’t match the camera prowess of the Redmi Note 5 Pro. You can check out the camera samples in full-resolution here. 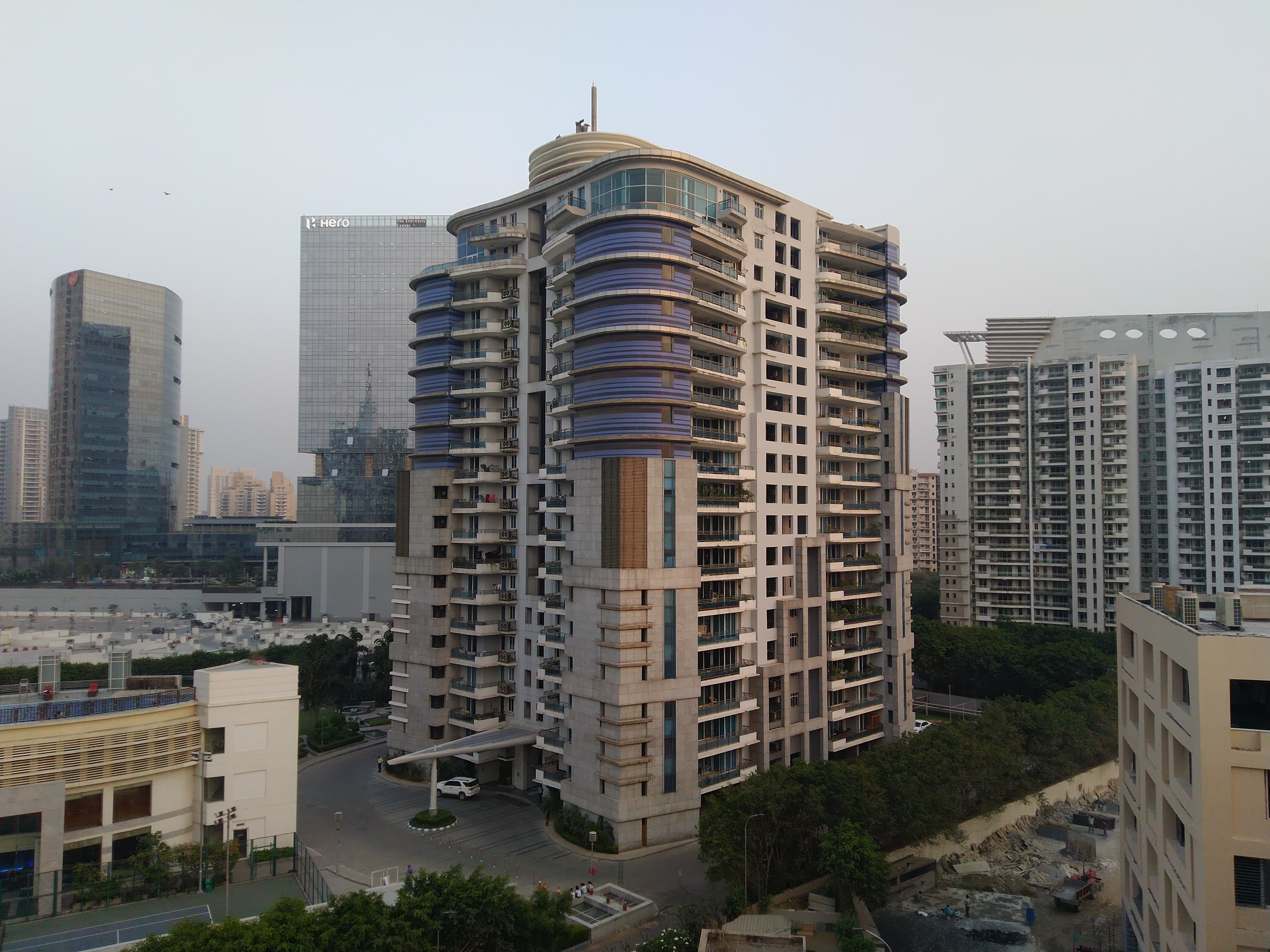 The Zenfone Max Pro is the first smartphone from Asus to ship with stock Android Oreo instead of the company’s proprietary ZenUI skin. While this isn’t part of Android One, Asus says it plans to deliver two major Android updates up to Android Q. 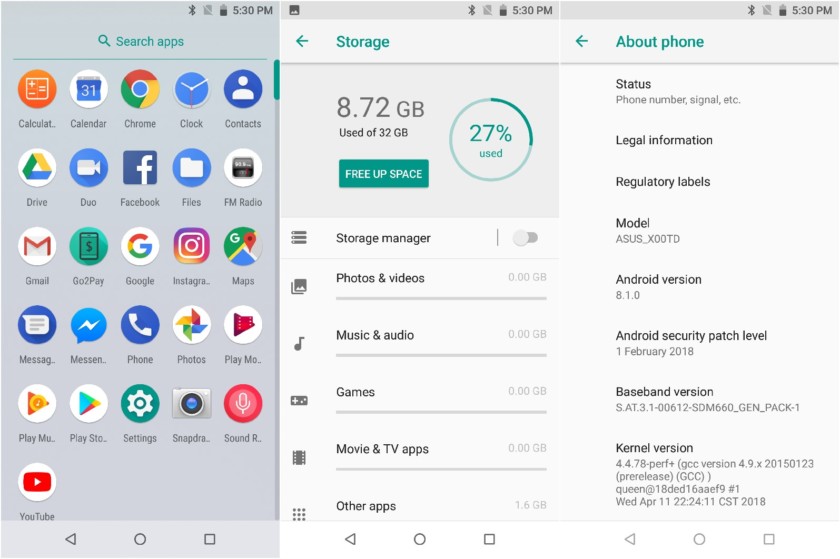 While it’s stock Android, Asus snuck in some pre-installed apps, which can’t be removed. There’s Facebook, Instagram, and Messenger, as well as the barebones mobile wallet Go2Pay. Some old ZenUI apps like the Voice Recorder, Calculator, and FM Radio too are carried over, though these are handy additions. 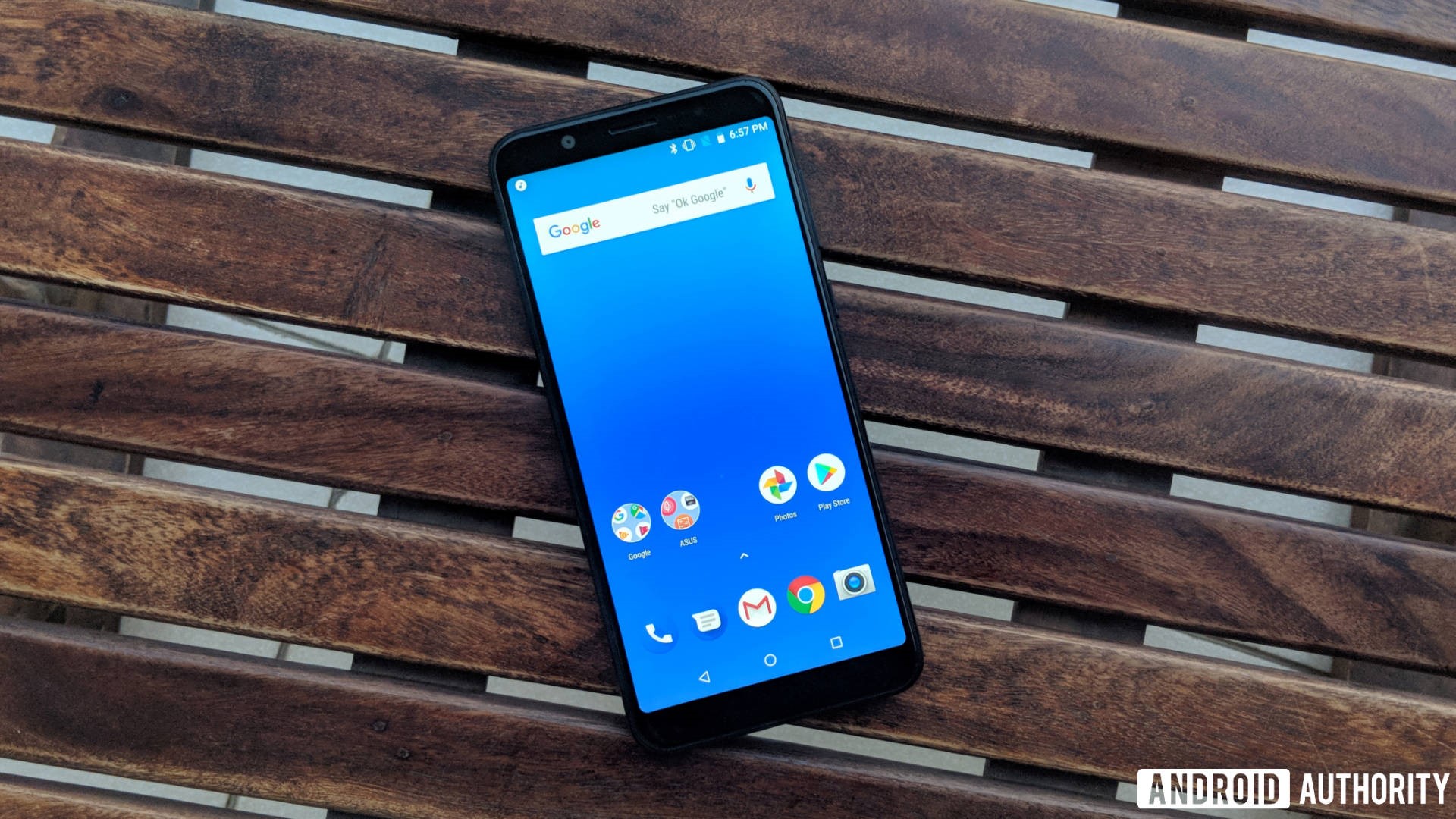 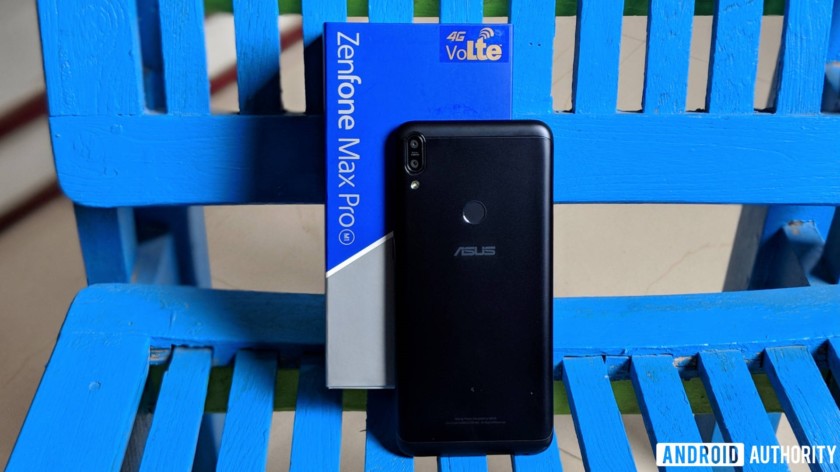 The Asus Zenfone Max Pro (M1) is a well-rounded smartphone greater than the sum of its parts and the pros outweigh the cons. The performance is first-rate, there’s the stock Android experience, and the aggressive pricing undercuts Xiaomi’s offerings.

The Asus Zenfone Max Pro (M1) is a well-rounded device that ticks all the boxes for an affordable smartphone.

The Zenfone Max Pro could definitely improve in the camera and battery departments, which is actually a great position to be in since a lot can be done there with future software updates. That said, the Asus Zenfone Max Pro (M1) is a top-notch value-for-money device that can take on the best in the market with ease.

Read more from News
← Google’s Digital Wellbeing initiative: Everything you need to know
Save $100 on Garmin’s Fenix 5X fitness watch with integrated GPS →