Windows 10’s Timeline is the star of its latest update

When Microsoft launched Windows 10 three years ago, the company proudly said it was focusing on productivity. That might not sound very exciting, but it was a noble goal nonetheless — one that made it clear Microsoft was paying attention to its more dedicated users. So it’s not too surprising that the most interesting aspect of Windows 10’s spring update (which launches on April 30th) is once again productivity, and more specifically: Timeline. It’s practically an inevitable feature, one that ties together what you’re working on across all of your devices. And yes, it’ll even be helpful for iPhone and Android users.

Jump in the Timeline

Microsoft unveiled Timeline a year ago at its Build developer conference, and it was initially expected for last fall’s Creator’s Update. Well, the company obviously missed that deadline, choosing instead to focus on Mixed Reality for that release. At its most basic, the feature is an interactive log of everything you’re working on, similar to your web browser history. What makes it truly interesting, though, is that it’s tied to your Microsoft account. That means it can track your progress across multiple machines, be it your home and work PCs, as well as your smartphone.

On Windows 10, you can access the Timeline by hitting the Windows and Tab keys together, or by clicking on the icon in the taskbar. Previously, that key combination unlocked a slightly prettier version of the Alt + Tab task switcher. At the top of the Timeline, you’ll find all of your open apps — scroll down, though, and you’ll find everything you were previously working on. The feature also lets you see what you’re browsing on Edge on your iPhone or Android device, or continue on documents from Office 365 apps.

Timeline will track your progress for up to 30 days, and you also have full control of the feature in a new “Activity History” section in Control Panel. You can wipe out your Timeline progress at any time, or choose to stop tracking activity from your machine entirely. If you use multiple Microsoft accounts in Windows 10 (for example, if you’re juggling work and personal logins), you can also select which one Timeline can track.

It’s a feature that many Windows users likely won’t notice at first, but after testing it for a few weeks, it’s something I can’t live without. Timeline was helpful whenever I needed to quickly find a document I was working on, but couldn’t quite remember the name. It also helped me get back up and running quickly whenever I needed to reboot my laptop. Browsing through weeks worth of activities was a cinch, though it would sometimes take a fraction of a second for icons to pop up if I scrolled too quickly. I didn’t have a chance to test it on multiple Windows 10 PCs, unfortunately, but I’d imagine it’ll be even more useful when I bounce from my home desktop rig to laptops for work.

Focus Assist cuts out the noise 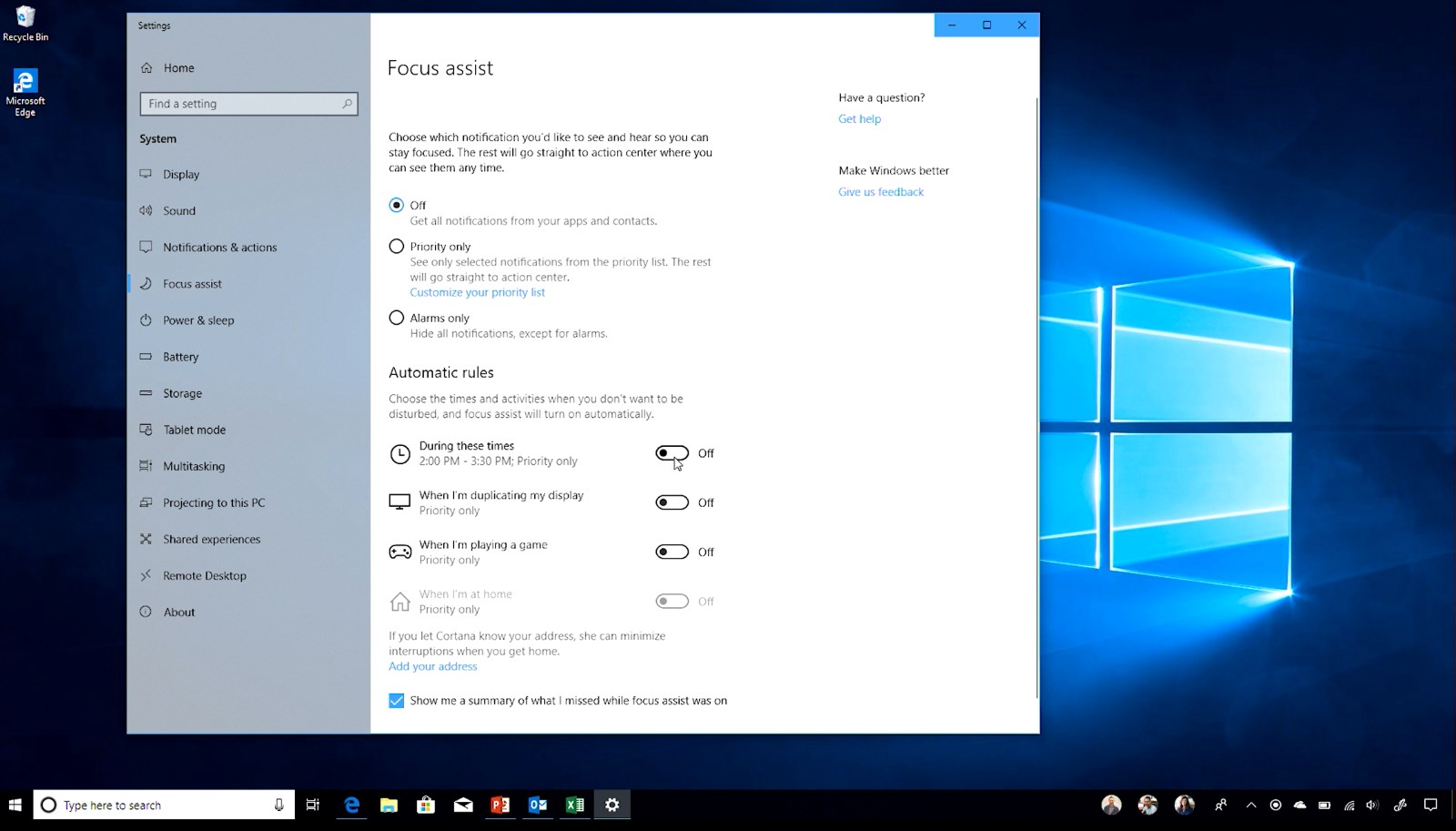 In another bid towards increasing productivity, Microsoft is introducing “Focus Assist,” a new feature that’ll mute notifications and other distractions. It has a priority mode, which lets you choose specific people and apps to let through your filter, as well as an “Alarms only” mode that blocks everything. You can also create a schedule to automatically turn on the priority mode, as well as choose to enable it whenever you’re playing a game, duplicating your display, or when you’re away from home. Once you’re out of Focus Assist, all of your delayed notifications will appear in the Action Center.

Given that we’re all bombarded with notifications these days, and we’re far more productive when focusing on a single task instead of multitasking (it’s science!), Focus Assist seems like a wise addition to Windows 10. While it’s not really a complex feature, it’s one that shows Microsoft is thinking deeply about the problems its users encounter daily. I appreciated being able to turn it on and mute Slack notifications when I was working hard on reviews, and I’ve also set up a nightly schedule to avoid distractions when I’m working late.

Microsoft has had a speech recognition feature in Windows since Vista, but it’s always been a bit tough to take advantage of. The company is aiming to fix that with the spring Windows 10 update. You’ll still need to enable the feature manually in your Speech settings, but once you do that and go through a short training sequence, you’ll be able to dictate text simply by hitting the Windows key and H together. You can optimize it for headset, desktop or specialized microphones (like laptops that have an array of several mics built-in).

Based on my testing, the dictation feature isn’t exactly a replacement for professional speech recognition software like Dragon, but it seems faster and more accurate than in previous versions of Windows. And I really appreciate being able to enable dictation quickly with a hotkey — it was invaluable as I was jotting down thoughts for several reviews. 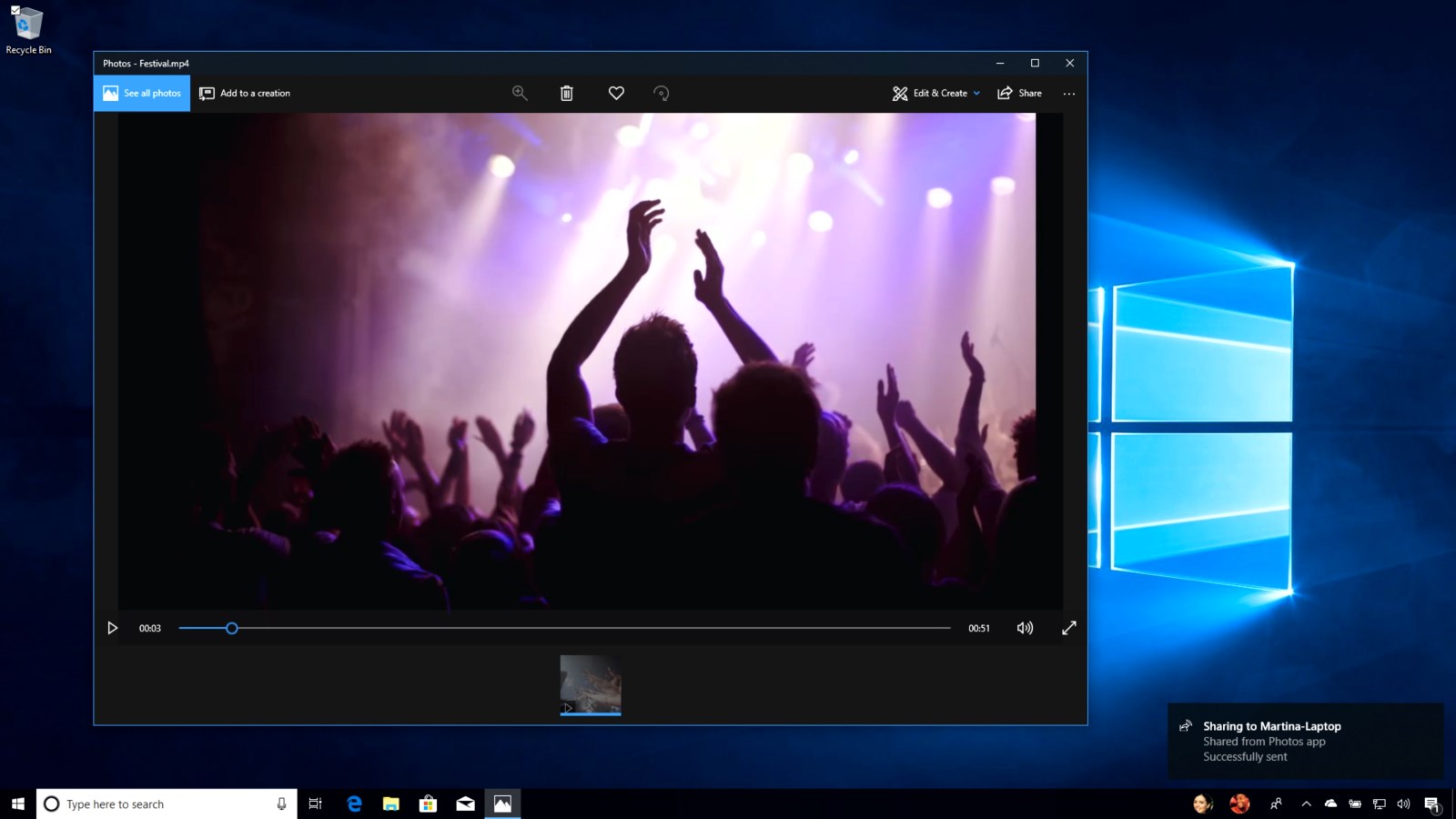 While the Windows 10 Fall Creators Update was relatively ho-hum, this latest release could fundamentally change how many people use Windows. Timeline, in particular, seems like something PC users have needed for some time now. It’s heartening to see that Microsoft is also making good on one of its original goals with Windows 10: to improve over time to make users more productive.