By Darryl Wilkinson and Grant Clauser

This post was done in partnership with Wirecutter. When readers choose to buy Wirecutter’s independently chosen editorial picks, it may earn affiliate commissions that support its work. Read the full article here.

If you’re looking for an easy-to-use universal remote to control up to eight devices, we recommend the Logitech Harmony 650. It’s the best option for most people looking to simplify the operation of their home theater or media system. It’s easier to program than any non-Harmony remote. Its backlit hard-button layout makes it simple to use, even in the dark, and it’s way cheaper than other systems that are equally comprehensive.

Who needs a universal remote?

You already have a remote for your TV and your DVR, so why do you need another? If your home entertainment system consists of only two or three devices, such as a TV, a DVR, and maybe a DVD or Blu-ray player, you may not want a universal remote. But if sitting down to watch TV or a movie requires shuffling between several remotes, switching inputs, and powering multiple components at the same time, a universal remote is for you.

A universal remote control has to be, well, universal. That means that the remote can control all the components an average audio/video enthusiast could throw at it. A remote that can juggle eight devices at once will cover most systems. It should also have a well-organized button layout or on-screen display that can combine multiple actions into one button. Finally, it should be easy to program and connect with your devices.

If you scan Amazon and other online retailers for universal remotes you’ll find a lot of low-end replacement remotes—remotes whose primary purpose is to replace the one the dog ate and do little else. Competition in the advanced remote category is very small. Though we did sample other products, these days, selecting the best universal remote is largely a matter of selecting the best Logitech Harmony device. There are also several systems for using your smartphone as a remote, but we think the demands of unlocking the phone and opening an app for something as simple as changing a channel rules out the app approach for most people. 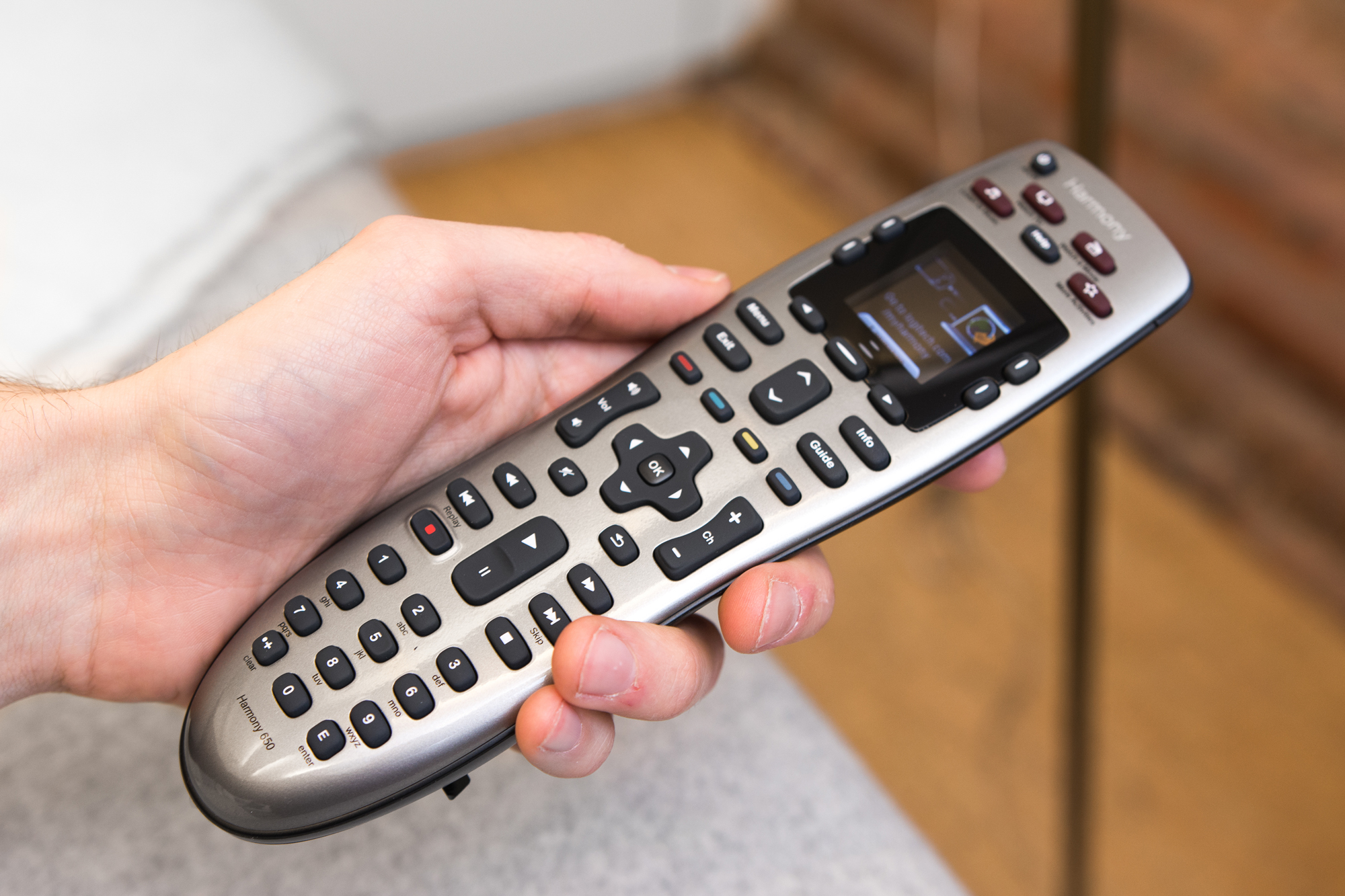 The Logitech Harmony 650 is the best universal remote for most people because it can coordinate the functions of up to eight components, is relatively simple to program with its MyHarmony software, and uses a smart, activity-based interface that simplifies control of your whole home theater. It can control only IR (infrared) devices—that’s most audio, video, and home theater gear—but it can’t communicate over Wi-Fi or Bluetooth, so it isn’t compatible with some recent devices such as the PlayStation 4, Sonos speakers, or Amazon Fire TV.

By far, the most helpful feature of the Harmony 650 is the help function accessed from a button above the display. If for some reason your TV didn’t turn on or the receiver didn’t switch to the correct input after you selected an activity, pressing the Help button will cause the Harmony 650 to immediately emit an infrared command that will, ideally, rectify the situation. 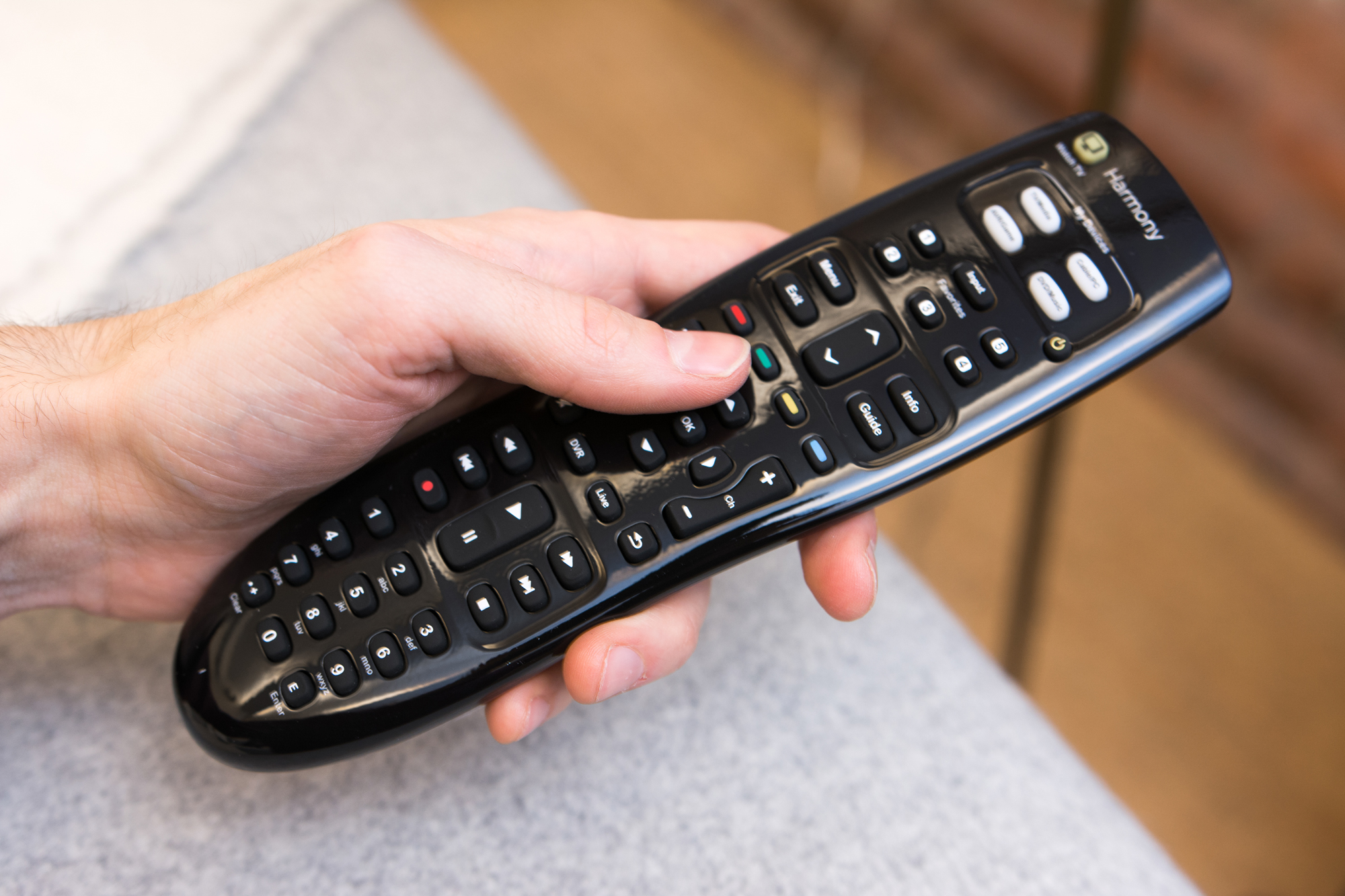 We think the 650 is a great value for what it offers, especially for something you’ll use multiple times per day, every day. But if you’d prefer to save some money, the Harmony 350 also controls eight devices and is very similar to the 650.

However, a few things keep it from being our overall pick. The loss of the screen means it isn’t as simple to use. Also, its buttons aren’t backlit, which is a big deal if you’re trying to use the remote in the dark. It also lacks the interactive help feature. 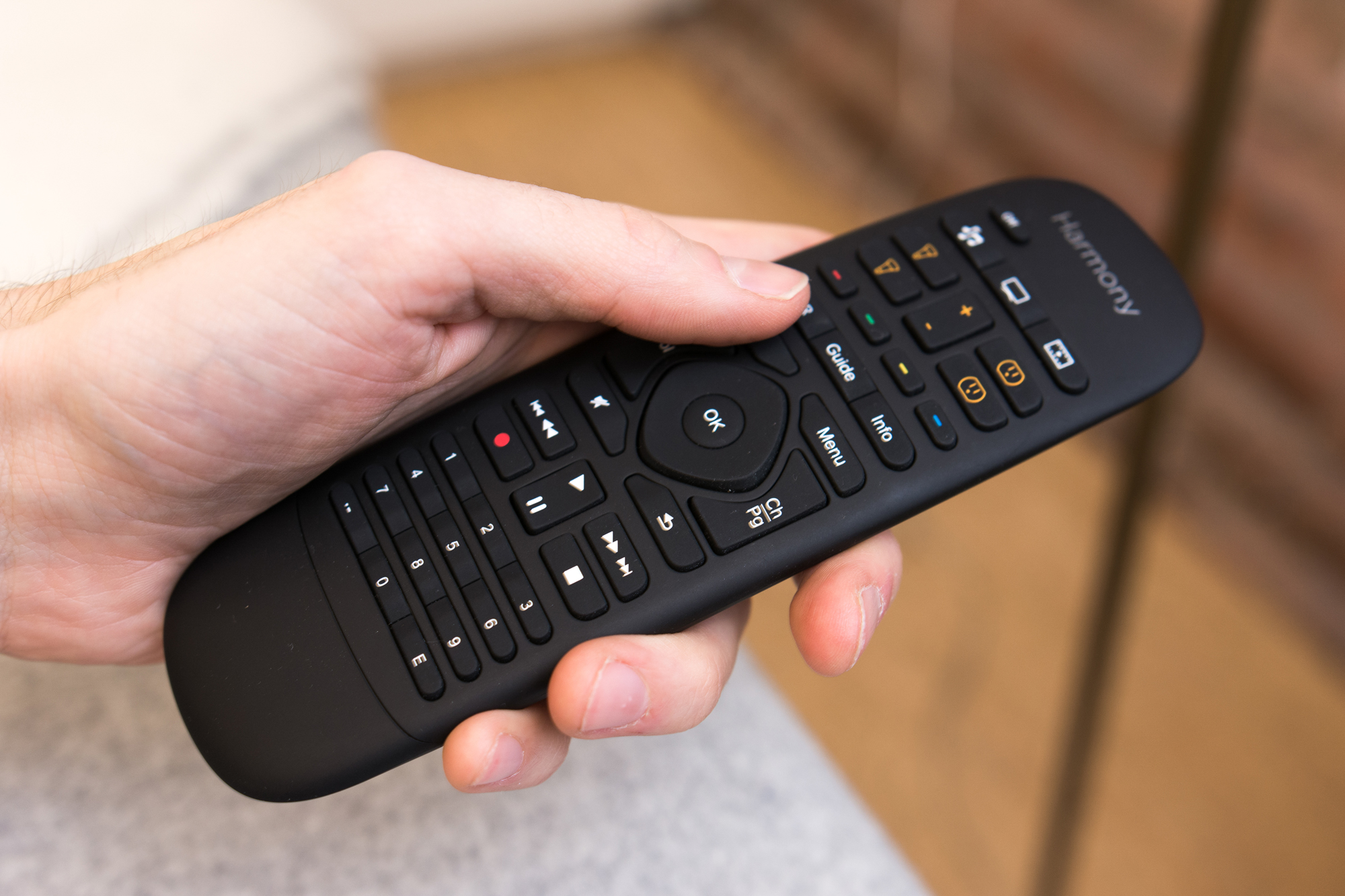 The Harmony Companion remote is smaller, sleeker, and more powerful than the Harmony 650, but gives up the cheaper device’s useful display and easy-to-navigate help functions. (The help feature is available in the Companion app.) Photo: Michael Hession

The Harmony Companion is usually two to four times more expensive than the Harmony 650. It controls the same number of devices, can be set up with the MyHarmony application or a smartphone app, and has a similarly intuitive, conveniently arranged button layout.

So what do you get for the extra money? Most notably, the Harmony Companion is a two-piece system consisting of a handheld remote and a separate “hub” that’s placed next to the AV components in your system. The remote doesn’t have a built-in IR emitter. Instead, the IR emitter, along with the Bluetooth and Wi-Fi radios, are built into the hub—that means you can connect with Sonos wireless speakers, a PlayStation 4, or any other non-IR devices. The Bluetooth and Wi-Fi radios let you control a wide range of smart-home systems and devices. The Companion also allows you to control your system with the Harmony app and can be operated with Amazon’s Alexa voice interface. 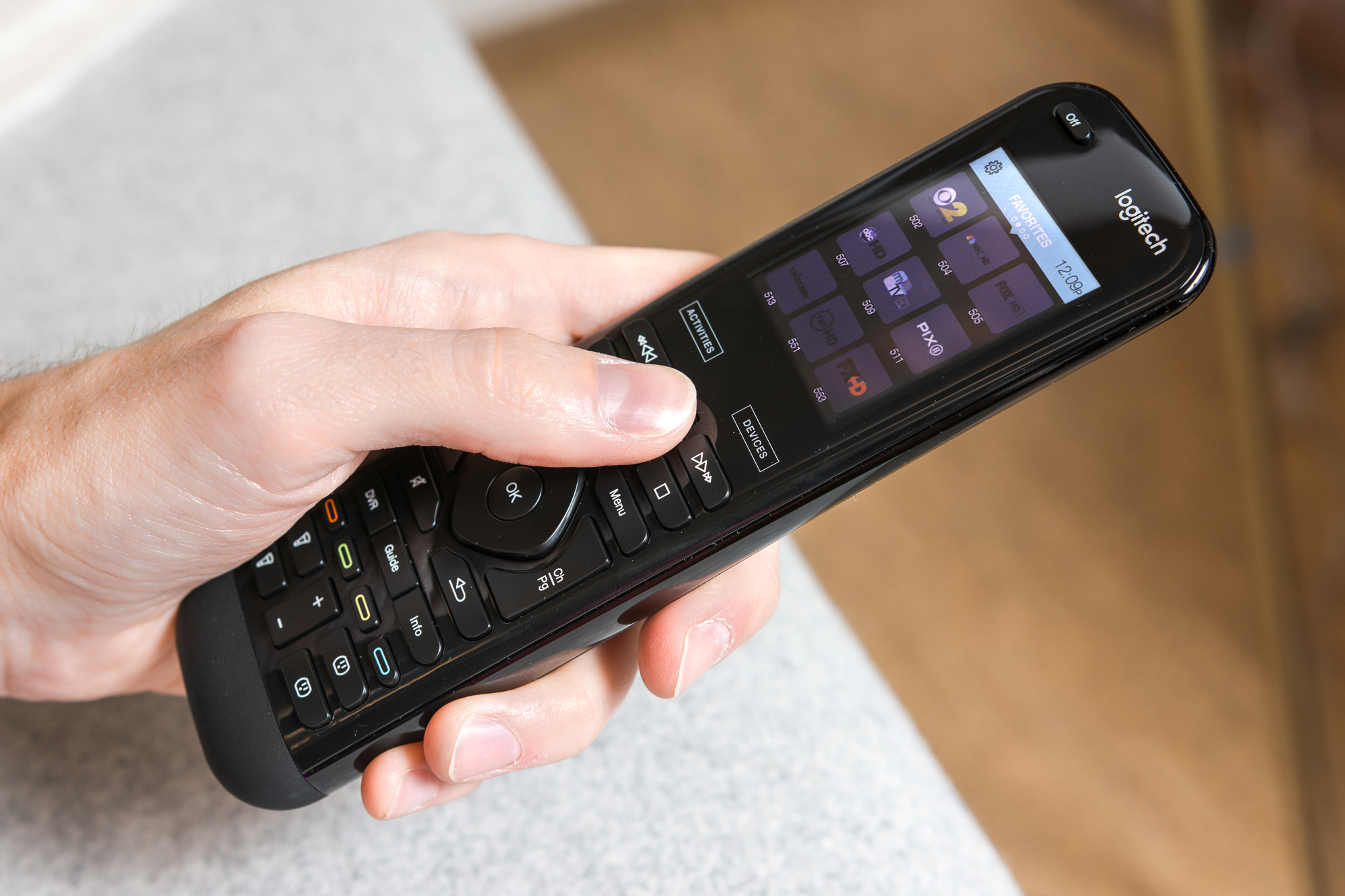 If the relative ease of programming, vast control database, and smart activities of the Companion just isn’t enough for you, and what you really want is a cool color touchscreen to let you tap your home theater into action, and you’d like to integrate even more of your smart-home devices into your system, you’ll want to investigate the Harmony Elite, the top-dog remote in the Logitech lineup. It can control up to 15 devices, and it comes with two IR blasters you can position in front of the cabinet doors to keep your gear out of sight.

What if you don’t want another handheld device but the idea of universal remote control does appeal to you? Of all the app-based systems we tried, we liked the Logitech Harmony app best, which comes with any of the company’s Hub-based remotes. You can also purchase the Harmony Home Hub as a stand-alone unit (it’s available without a remote) and just use the app. But it currently costs more than you’d spend for our top pick, the Harmony 650.

Read more from News
← Apple goes on hiring spree to improve Siri’s smarts
Pay what you want for the Absolute Python Bundle! →