Switching from iPhone to Android: Everything you need to know 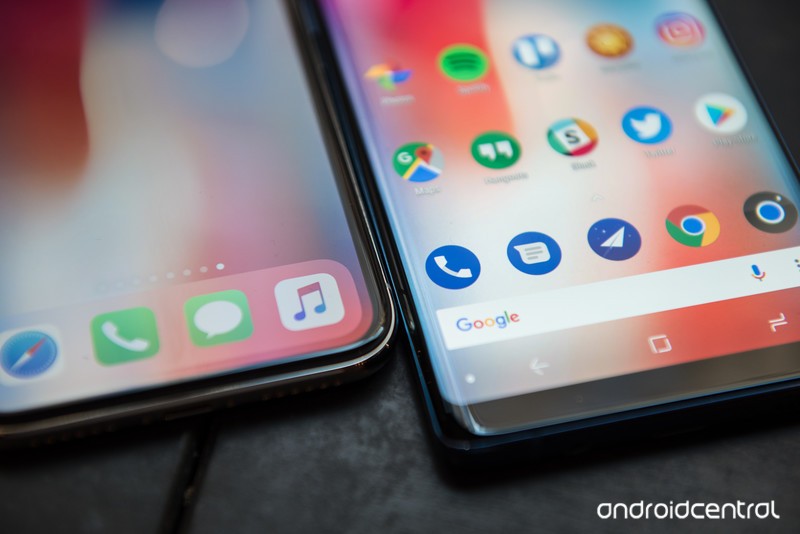 So you’ve seen the light and are switching from iPhone to Android. Welcome! Here’s what you need to know!

Switching from iPhone to Android can be a bit daunting. If you’re unpacking a brand new Pixel 2 or Galaxy S8, or something else equally exciting, let us help you get set up quickly and easily!

If you’ve never used an Android phone before, there are a few things you should know before taking the leap (even though it’s the leap home).

Switching from iPhone to Android isn’t the same as upgrading the from the iPhone 7 to the iPhone X. It’s more akin to switching from Mac to Windows (though not as drastic). General functions are still similar, but major Android phone manufacturers will often have proprietary user interfaces, distinguishing them from other makers.

Therein lies the rub. There is no single version of Android in the way that there’s only one iOS. Companies take the Android operating system and interpret it and mold it according to their vision, meaning you’ll get a different experience using a Samsung phone than you would using an HTC phone or an LG phone.

Though all Android operate similarly on a fundamental level, it’s the little, finicky difference that set them all apart, so it may take some getting used to.

If you’re just about to turn off your iPhone and put your SIM card into a brand new Pixel, Galaxy or something else shiny, here’s what you need to know!

When you message other iPhones from your iPhone, they’ll communicate via iMessage when you’re connected to the internet. This is different from regular SMS texting, and if you leave iMessage turned on on your iPhone, many of your texts will still be routed through that service.

If you’re on your new Android phone, you won’t receive any of those messages. You need to disable iMessage before making the switch! (And while you’re at it, turn off FaceTime.)

If you have pay-upfront apps on your iPhone that you paid for, you’ll likely have to buy them again from the Google Play Store if you want them on your Android phone.

The Google Play Store and the App Store are completely different entities, and the apps they house are made for different platforms. Some of the apps you had on your iPhone may not even be available for your Android phone and vice versa. That said, if you’re subscribing to a service like Spotify or Evernote, you just need to download the app and log in on your new Android phone to get going.

You may need to re-sync your life

If you have all of your contacts, calendar events, photos, documents, and more synced with iCloud, and everything’s on your iPhone, you’ll likely have to re-sync everything on your Android phone.

Android’s version of the cloud is housed in your Google apps, like Docs, Gmail, Contacts, Drive, and more. When setting up your Android phone, you’ll set up a Google account and from there, you can actually sync some of your iCloud content with your Google account, so that you don’t have to re-enter all of your dates, contacts, etc.

What you’ll need to bring with you

You don’t have to leave your life behind on your iPhone. You can bring your information with you so that you’re not taking hours to populate your Android phone with all of your stuff.

Yes, Google and Apple are direct competitors and the two biggest competitors in the mobile game, but neither makes it too difficult to switch teams. Rather than manually enter all of your contacts into your new Android phone, you can export your iPhone contacts in a few different ways.

If your calendar is flush with events, it’d be a major pain in the behind to have to add them all in again once you’ve made the switch to Android. Luckily, all of your calendar info resides in files called ICS, which are widely used and easy to transfer.

Like most of us, your phone is probably your primary camera. You’ll want to take those precious memories with you when you leave the land of Apple, especially if you’re planning on erasing and selling your iPhone after. We recommend using Google Photos. Most Android phones have Google Photos pre-installed (and if not, it can be downloaded from the Play Store) and it’s a super quick and easy process.

Some manufacturers have their own tools to help you migrate your information from a computer. So if you have all your iPhone data on a computer, you can add it to your Android phone using the maker’s tool.

You won’t be able to add an iPhone backup to your Android phone, but you’ll be able to drag and drop contacts, music, and more from your computer.

You’ll need to use the desktop client to be able to move your iPhone data to your new Samsung phone. It’s essentially the same as moving files around on your computer, but by connecting your Android phone to your computer, you’ll be able to transfer everything right to your phone.

LG Bridge lets you interact with your LG phone on your computer, where you can easily transfer all of the stuff you want to bring over when you migrate from iPhone to Android.

Each Google Pixel comes with a USB-OTG adapter that allows you to quickly and easily transfer files, contacts, calendar entries and even iMessages from an iPhone to your new Android phone.

At the end of the day, switching to Android from iPhone is nowhere near as difficult as switching your writing hand, or even using that hand to write a test! An Android phone still performs the same basic functions you’re used to: making calls, messaging, surfing the web, playing games, etc.

It may take some getting used to, but you might find yourself feeling freed with all the customizable options that Android has to offer (I took three days to decide my home screen layout when I got my first Android phone after switching from iPhone).

Have fun with it and really do your research before buying your first Android phone so that you make sure you’re buying what’s best for you.

If you need some help with choosing, check out our Smartphone Buyer’s Guide, where we show you the particulars on just about every Android phone around, so that you can make an informed decision when it comes to switching over.

Got a question about using and Android phone? Little nervous about making the switch? Let us know in the comments below!

Read more from News
← China’s censors have taken down 13,000 websites in 3 years
How to restore your apps and settings to a new Android phone →