As my T-65B X-Wing glides into view, I survey the scene up ahead. TIE fighters chase after nimble A-Wings, a flurry of green laser fire in their wake. A group of X-Wings circle an Imperial Cruiser, unloading proton torpedoes in a desperate attempt to lower the Empire’s defences. To my left, I spot some TIE Interceptors headed toward my fellow X-Wings. Instinctively I barrel forward and harry them before a well-timed missile turns my ship into space debris. My heroics were short-lived, but I’m soon able to pick a new vehicle and rejoin the fray, gaining my revenge on the TIE Bomber that so casually stopped me before.

I’m playing Starfighter Assault, a new mode in Star Wars Battlefront II that build ons the space dogfights offered in its predecessor. It’s being developed by Criterion, a studio best known for its work on Burnout and Need for Speed. During the last Battlefront’s development, the team was brought in to fine-tune the speeder bikes found on the forest world of Endor. Later, it made a free expansion for PlayStation VR which let you pilot an X-Wing during the events of Rogue One. These contributions, while important, pale in comparison to what it’s building for Battlefront II.

“I think the general opinion was that [people] wanted more space battles,” Rob Wyle, producer at Criterion said. “They wanted more time in ships and they wanted a bit more depth in the kinds of experiences they were getting. So that’s what we’re trying to provide.” 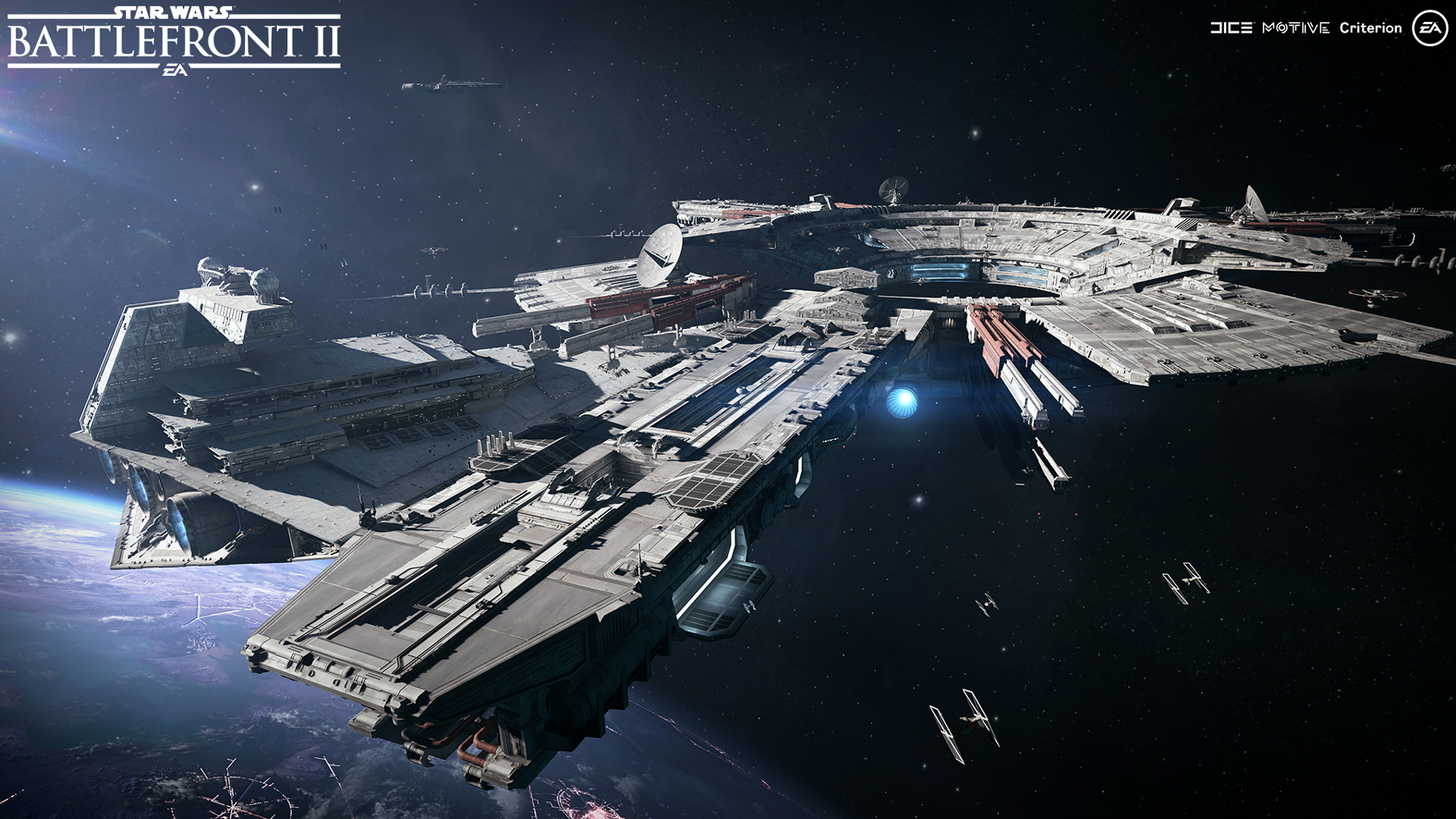 Starfighter Assault pits two teams, each with 12 player-controlled ships, in various dogfighting scenarios. It’s an evolution of the simple “Fighter Squadron” mode found in the last Battlefront and the three-phase “Battle Station” experience introduced in its Death Star expansion. At Gamescom, I was able to play a mission that takes place above Fondor, around a strategic Imperial shipyard. As the Rebel Alliance, it was my job to obliterate the base. The mission was broken down into three phases; unlike Battle Station, these all took place in the air, however. They involved whittling down the Imperial defences, destroying some crucial shield projectors and finally, damaging the couplings that protect the ship’s vulnerable reactor.

There’s no time limit, but you have a limited number of rebel ships at your disposal. Once your starighter has been destroyed, you’ll need to claim a new one from this collective pool, which serves almost as a health bar for the resistance. If you play as the Empire, it’s your job to keep the Rebels at bay and clear this stockpile of ships before they’re able to complete the mission. The two objectives are connected but distinct from one another, pushing players to team up and focus their fire in different ways.

Jeff Seamster, audio and narrative director at Criterion, said each mission is designed to reflect the two sides and their position in the larger conflict. In the case of Fondor, set in the original Star Wars trilogy, it’s a confident Empire against a Rebel Alliance on the verge of extinction. “The Empire, pretty much at the beginning of every day, thinks ‘There’s no way we could possibly lose,’ and the Rebels know at the beginning of every day there’s a very slim chance they’re actually going to win,” he explained.

Those odds have to be reflected in the objectives. Underneath, the odds are even, but on a surface level it should feel like the Rebels are at a severe disadvantage.

“It’s all down to routine play-testing,” he said. “We know right away if it’s like, ‘You know what, it’s just a little too easy for the Rebels to break through,’ or, ‘The Empire is having way too easy a time sitting back on their haunches.’ So we play it and talk about it constantly while we’re not playing it, and how it felt to come away from it. We have these debriefs afterwards where we ask, ‘Did that feel too easy? Did that feel appropriately difficult?’”

That balance feeds into the ships and their different roles. At first, for instance, I enjoyed piloting the A-Wing, which comes under the Interceptor class. It’s a small, agile fighter that can weave elegantly through the more complex architecture found inside the Galactic base. I used this ship to defend my fellow A-Wing bombers, but soon realised that an X-Wing would be better positioned to both protect and support these heavy gunners. As soon as the second objective started — taking out the shield nodes in a trench run-inspired corridor — I switched to the hardier A-Wing and lead the attack, relying on the rest of my player-controlled squadron to cover me. 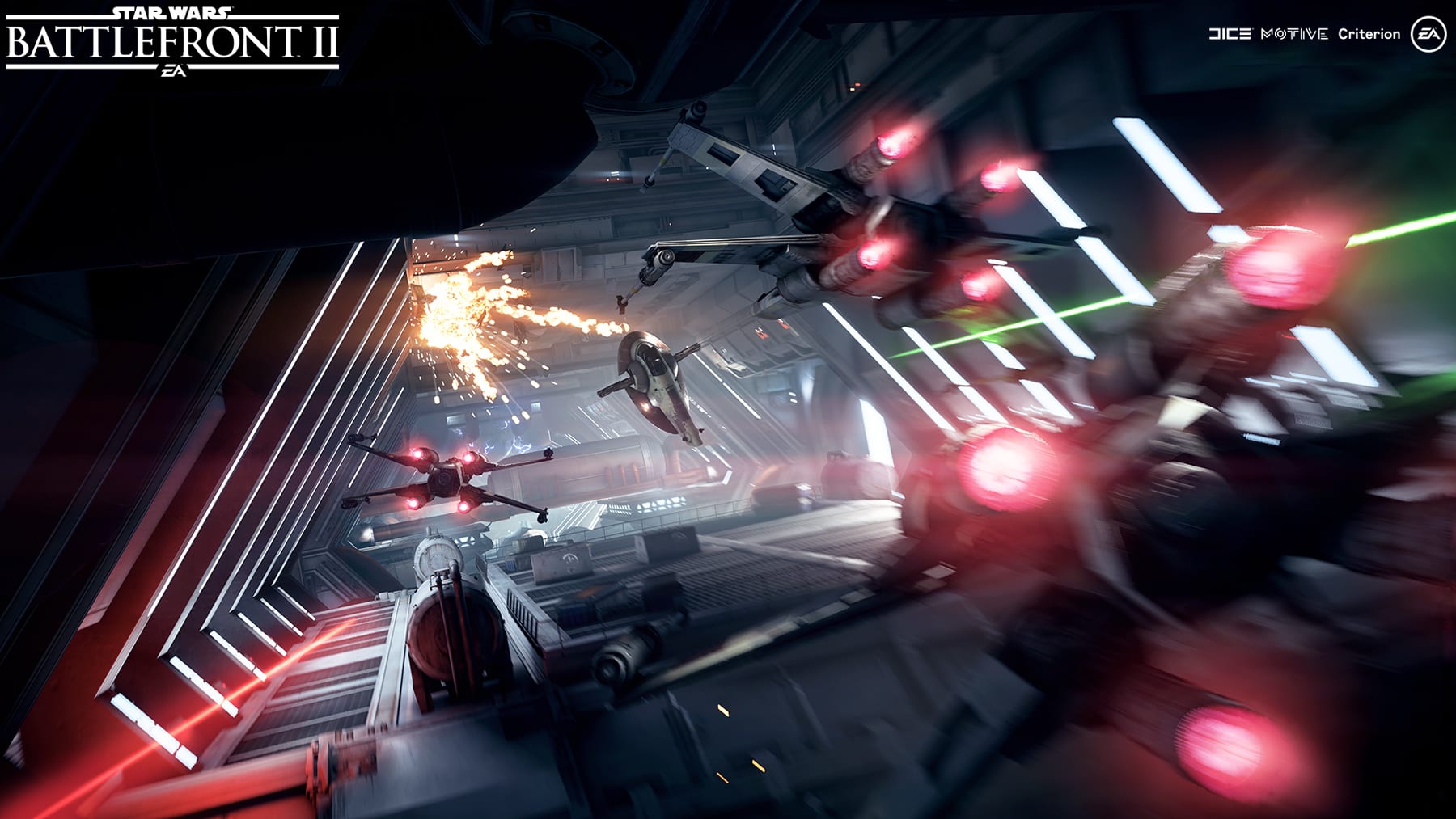 Whichever ship you choose, there’s a way to contribute. On the Galactic side, for instance, you might want to chase Rebel fighters in a TIE Interceptor. The slower TIE Bomber is equally useful, however, because it can take down the larger Corvettes providing defensive fire for the Rebels. Experienced players will be able to assess the situation and determine where their efforts are needed the most. Newcomers, however, can easily jump in, bounce between ships and still make a meaningful difference in the final outcome.

“We have to balance all the ships against one another,” Wyle said. “As well as the rebels being balanced against Empire. Or rather, we don’t want anything to be too unfair. We want to balance the rebel ships amongst themsevles so that you don’t have everyone saying ‘oh, there’s only one ship to play as because it’s the most powerful one.’ You’ve got to try to put some sort of balance in there.”

Criterion is also keen to make the game newcomer-friendly. While the last Battlefront game had depth, it was clearly designed with accessibility in mind. Starfighter Assault continues this concept with simple, arcade-style handling. The ships are fast, and while it’s possible to crash I never felt that any of them were outside of my control, or too difficult to manoeuvre. “We’ve got a long history of making people feel like they’re in control, even when they’re travelling at impossible speeds,” Seamster said.

“When it comes to speed, we give you just enough rope to hang yourself with.”

“We don’t anybody to come into this game and feel like ‘I’m just no good at flying.’ We want a person to come in, feel like they’re flying any of our starfighters at top speed and be actually amazed at their own ability, that they’re able to keep it under control.”

I did however, still fly into the occasional support beam and TIE fighter. “When it comes to speed, I’d say we give you just enough rope to hang yourself with,” Seamster chuckled. 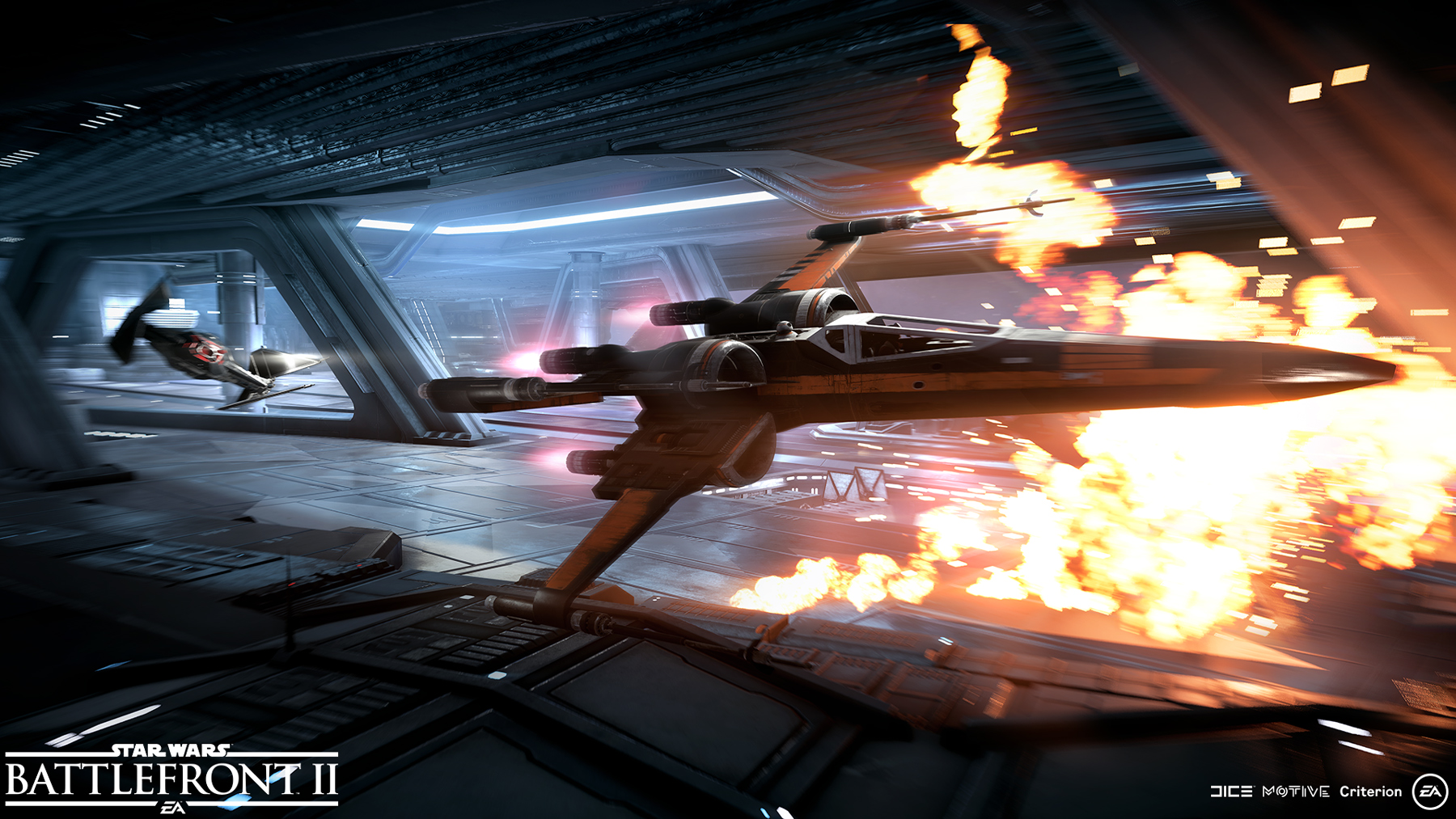 Defeating enemy players and completing objectives will net you Battle Points, which can be saved up for “Hero” ships. These are unique, powerful vessels that can easily change the momentum of a match. On the Rebel side, I was able to try Han Solo’s Millennium Falcon and the the Black One piloted by Poe Dameron in Star Wars: The Force Awakens. It’s here that Starfighter Assault truly swerves into wish fulfilment; while the normal ships are tied to their respective era, the Hero ships cross over, breaking authenticity and, to a degree, the game’s immersion.

“Everyone loves the heroes and wants to play as them,” Wyle said. So we said, ‘Let’s try to put them in every era that we can, and have some fun with it.’ We do keep a lot as authentic as possible. The ships are authentic and they look authentic, and they live in their own eras, for the most part. But the heroes, it’s fantasy fulfilment. You want some of those combos.”

Those “combos” include Darth Maul’s Scimitar, otherwise known as the Sith Infiltrator. The ship is able to cloak itself, disappearing from view until a short window passes or the player chooses to fire their weapon. It’s a vessel from Episode One (Maul’s story does continue through The Clone Wars and Star Wars Rebels, however), which never encounters Solo, Chewbacca and the Millennium Falcon. Here, in Battlefront II, however, I was able to chase the pair down in a tense, high-stakes dogfight, exchanging laser fire until the smugglers were no more. These situations, while a tad bizarre, are hugely enjoyable ‘what if?’ moments.

There will be other missions in Starfighter Assault, but for now Wyle, Seamster and the rest of the Criterion team are staying tight-lipped about them, They did, however, promise that all of them will have a “narrative” that contextualises the objectives and opposing forces.

Battlefront II is a big game. The multiplayer suite, which covers both ground and aerial combat, will include characters and planets from all three film eras. There’s an ambitious story mode too that puts you in the role of Iden Versio, a Galactic “Inferno Squad” soldier, directly after the events of Return of the Jedi. Starfighter Assault is, therefore, just a piece of the game’s expansive offering, but one that Criterion has clearly put a lot of time into. If you’ve ever dreamt of piloting an X-Wing, this is as close as you’re ever going to get. At least until Battlefront III comes along, anyway.

Read more from News
← Samsung is giving Note 7 owners a hefty discount on the Note 8
Samsung’s Note 8 has a 6.3-inch screen and an £869 price tag →