Adobe’s Lightroom can do wondrous things to photos, but fiddling with a mouse can impede your speed and creativity. This is where a product called Loupedeck comes in. It’s a control panel designed especially for Lightroom that lets you adjust white balance, contrast, exposure and many other settings by twiddling dials and pushing buttons instead of a mouse. It easily met its crowdfunding goals and is now a hit in retail, so I decided to try it out and see why it caught on with the photo crowd.

Loupedeck was dreamed up by a company in Finland with help from Nokia designers. First released on Indiegogo for $229, it raised €366,000 out of a €75,000 goal and is now available at B&H Electronics for $299. While a bit late shipping, all 1,436 backers have apparently received one, making it a rare successful crowdfunding campaign. It’s now in retail, and B&H says Loupedeck is its No. 1-selling Lightroom-related product.

There aren’t a lot of external control panels like Loupedeck for Lightroom and other photo-editing products. In the professional world, specialists use tools like the $20,000 Da Vinci Resolve control panel to do “color grading” on feature films, TV shows and commercials. Those are a necessity in that go-go world — rates can go up to $800 an hour, so clients are looking over your shoulder and at the clock. Speed is a must, in other words.

For Lightroom, the control options are cheaper, at least. One is quite weird: the Behringer BCF-2000, a motorized $299 audio mixer (above), customized for Lightroom with $99 Pfixer software (PFixer sells the bundle for $359). The advantage is that when you make tweaks in the software, the motorized sliders move to match.

Another option is MIDI2lR, a free, open-source app that converts any MIDI controller into a Lightroom device. There’s also Palette, a button and dial kit that gives you up to 15 control modules for $499, or CTRL+Console, a $30 app that turns your iPad into a touchscreen console for Lightroom. The latter apps also work with other Adobe apps, not just Lightroom. 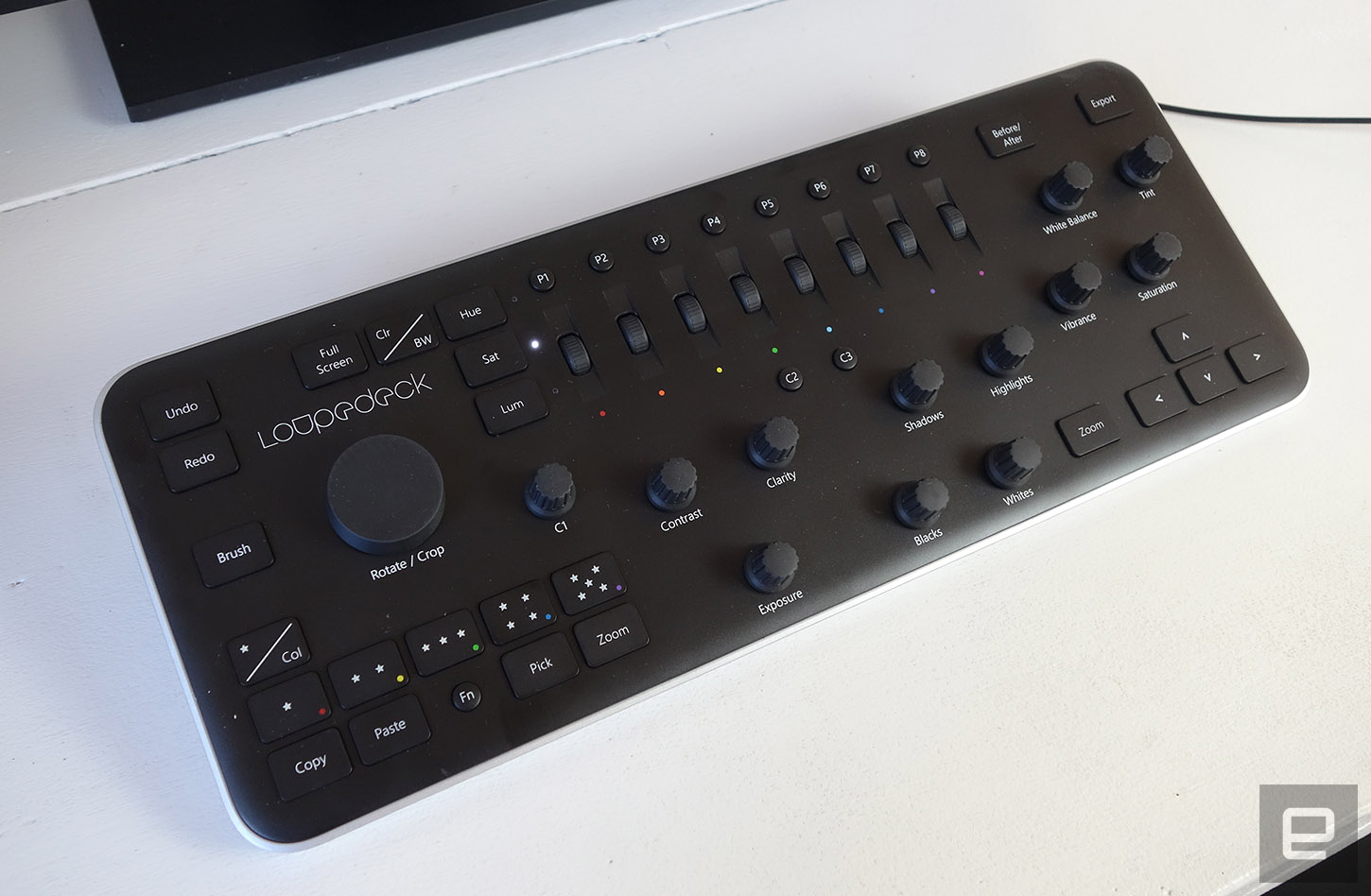 Loupedeck is a nice-looking, low-profile product that will look at home on your desk, unlike the bulky Pfixer solution — even the packaging is smart, matching the color of the device itself. Installation was very straightforward for me on Windows 10 (install the software, connect the device to a USB port), though I did have to update my version of Lightroom.

It also appears relatively professional if you have clients present, albeit a touch cheap. The controls are well-laid-out, with the most important dials at the bottom and secondary controls near the top, much like professional control surfaces.

The dials are relatively precise but require a lot of movement — around seven full rotations — to move across the full range for exposure, highlights and other settings. Luckily, each dial also doubles as a push button, instantly moving the setting to zero. The quality of the dials is about what you’d expect for a $299 product, good but not great — there’s a bit too much play if you push them back and forth. The buttons require a little more force than you’d expect. That said, I didn’t have any problems or mis-clicks during the limited time I had the Loupedeck. 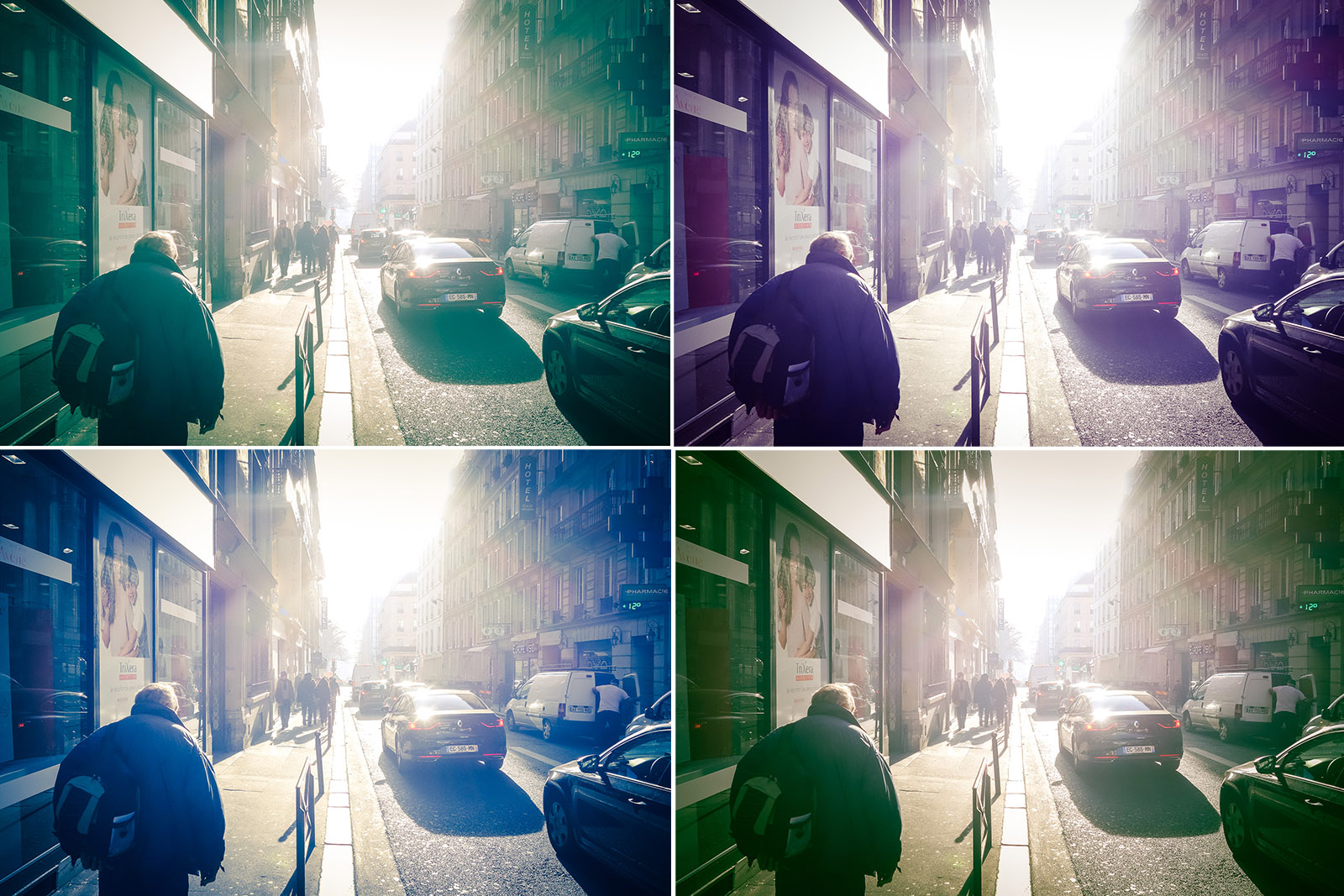 Some of Loupedeck’s default color presets

As someone who likes to tweak images, I find the Loupedeck very useful for letting me keep my eyes on the screen while I make adjustments. I set up the programmable buttons (P1 to P8) for specific looks that I generally use, like contrasty, vignetted or desaturated. That alone can get me 90 percent of the way there, and the final fine-tuning is a cinch thanks to the image- and color-adjustment dials. I didn’t quite master the layout without looking, but after a few more days I’d likely be there.

If you’re more into speed, you can “rate” photos very rapidly using either a star or color system, and do quick setting adjustments, as PetaPixel’s Paul Rogers showed for a wedding shoot. Using that technique, he was able to process images in around 20-40 seconds, about the same amount of time it takes with his Behringer Pfixer panel.

That’s not to say that it’s perfect. There aren’t a lot options for programming — the single C1 programmable dial can only be set for de-haze, noise reduction, vignette (the default) or sharpening. Similarly, the C2 and C3 buttons can be programmed with as many as four functions in total, but Loupedeck offers only three, so that’s a bit ridiculous. Hopefully, it will add more over time.

It would also be nice if Loupedeck worked with apps other than Lightroom, especially in the Adobe family. The panel would be particularly handy for Premiere Pro CC, with the rotate/crop as a jog/shuttle/stop button, and other dials for trimming and sliding edits, adjusting audio, color correction, etc. That doesn’t seem to be in the cards for now, though.

Despite those little nags, the Loupedeck is surprisingly bug-free for something so new and is a nice-looking, solid-feeling product. But $299 is quite a chunk, so it’s obviously not for casual photo editors. If you’re a pro or serious amateur who processes a lot of photos with Lightroom, however, it could both make you more creative and save you a lot of time.