‘Sonic Mania’ is a wonderful balance of nostalgia and novelty

If you’ve played Sonic the Hedgehog on your phone, Xbox 360 or PlayStation 3 in the last half-dozen years, you have Christian Whitehead to thank. In 2009, he created an unofficial proof of concept iPhone port of Sonic CD using a custom-built game engine — a project that eventually led to Sega hiring him to officially port Sonic CD, Sonic the Hedgehog and Sonic the Hedgehog 2 to modern platforms. This week, the fruits of that partnership reached a new high point in Sonic Mania, an all-new 16-bit Sonic the Hedgehog platformer that sees the mascot return to his glory days.

That might sound a bit overzealous, but it’s written with honesty. There’s a stigma attached to Sonic the Hedgehog games; a pattern of expectation and disappointment that’s become so ingrained in the series’ community that it’s known as the “Sonic Cycle.” The cycle is mostly an old joke, but there’s a grain of truth to it: Sonic games are typically announced with a lot of fanfare but often fall flat after launchh. Whitehead’s modernized remakes, however, are rare exceptions — and Sonic Mania builds on everything that makes those ports great.

Sonic Mania works for the same reason Whitehead’s updated Sonic the Hedgehog ports work: It understands and accurately re-creates the delicate balance of speed, acceleration and momentum that defined the series’ early games. In Mania, Sonic, Knuckles and Tails jump, run, dash and move exactly as they did in Sega’s classic platformers. Sonic Mania feels right in a way that a mainline Sonic game hasn’t since 1994.

Again, that’s no surprise, considering it was created by a team that made a name for itself in modernizing Sonic’s original adventures — but this faithful re-creation of the original game’s physics serves as a foundation for an experience that both celebrates and adds to the history of the franchise’s classic games.

Mania overlays that excellent base gameplay with gorgeous sprite work that outstretches the limitations of its 16-bit inspiration. It’s still nostalgically pixelated, but the game uses a much broader palette of color, lending the game’s characters, backgrounds and power-ups subtly detailed highlights. 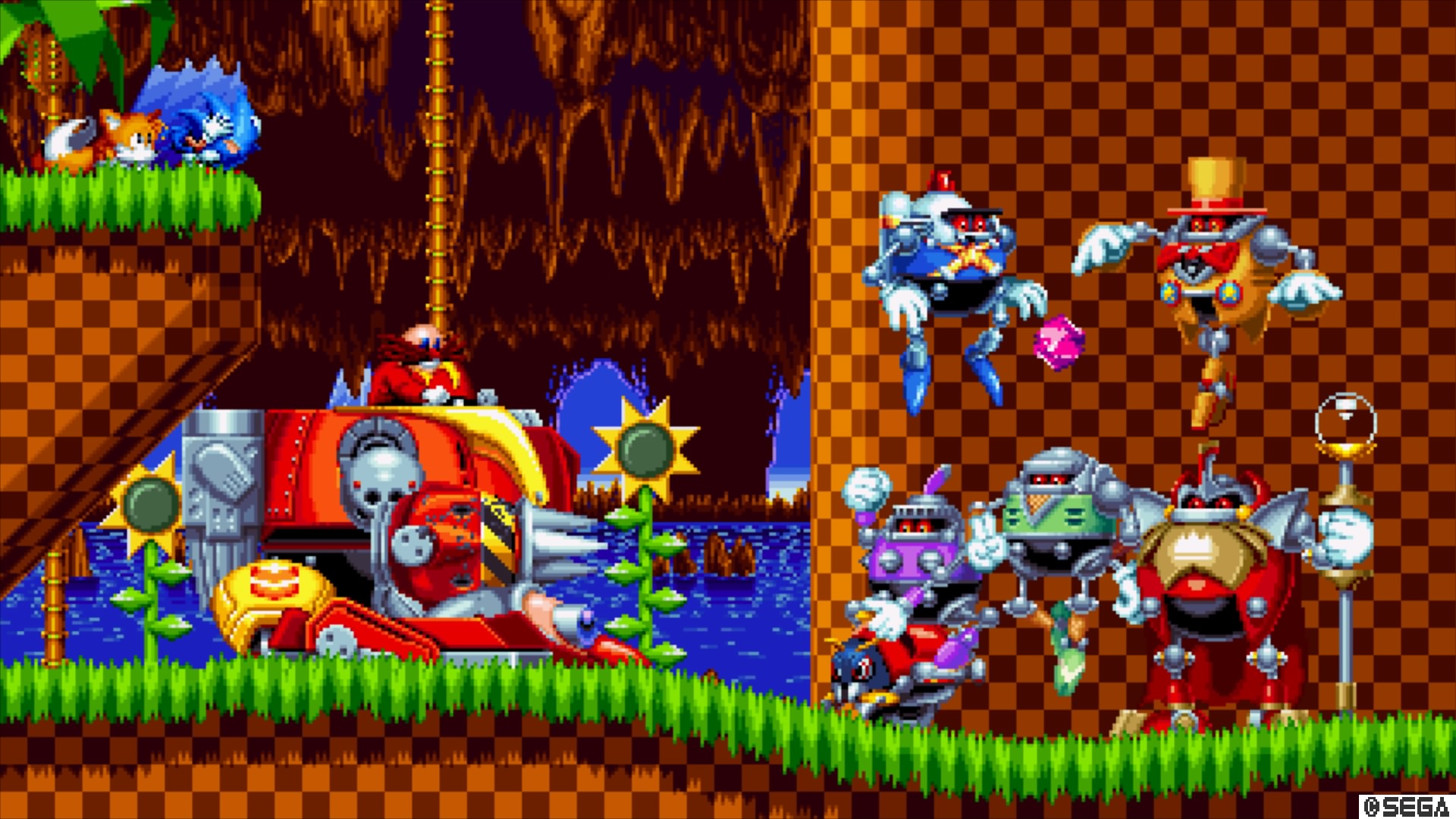 That’s the crux of the Sonic Mania experience — a careful merging of the old and the new. On a visceral level, it looks and feels like a classic Sonic the Hedgehog game, but it delivers an experience that’s just beyond your nostalgic expectations. Here’s a familiar-looking hero but with smooth, nuanced animation that lends his character more charm than you expected. Here’s the gameplay you loved in the ’90s but with new abilities and gimmicks to keep it fresh. Even the game’s levels adhere to this philosophy: Most of Sonic Mania’s stages are throwbacks to older games, but all of them are more than what they seem.

Take the game’s first level — after a brief story sequence seemingly throws Sonic back in time, Sonic Mania starts out just like the franchise’s very first game: in Green Hill Zone. The first half of the level looks like a dead ringer for mascot’s first adventure, but as you play on, it becomes obvious that it’s different. The zone now has new divergent paths that climb into the sky or go deep underground, and the entire stage is bigger, longer and more complicated. Instead of a simple goal post at the end of the level, there’s a new mini-boss to defeat.

The difficulty curve of classic gaming is alive and well in Sonic Mania, too. Losing all your lives can be punishing — fail to beat a boss at the end of a two-level zone, for instance, and you’ll have to play through both levels again before taking on the stage’s big baddie. The game gives you unlimited continues, but it can be frustrating to be set back two levels when you’re trying to figure out how to beat the game’s last epic boss fight. 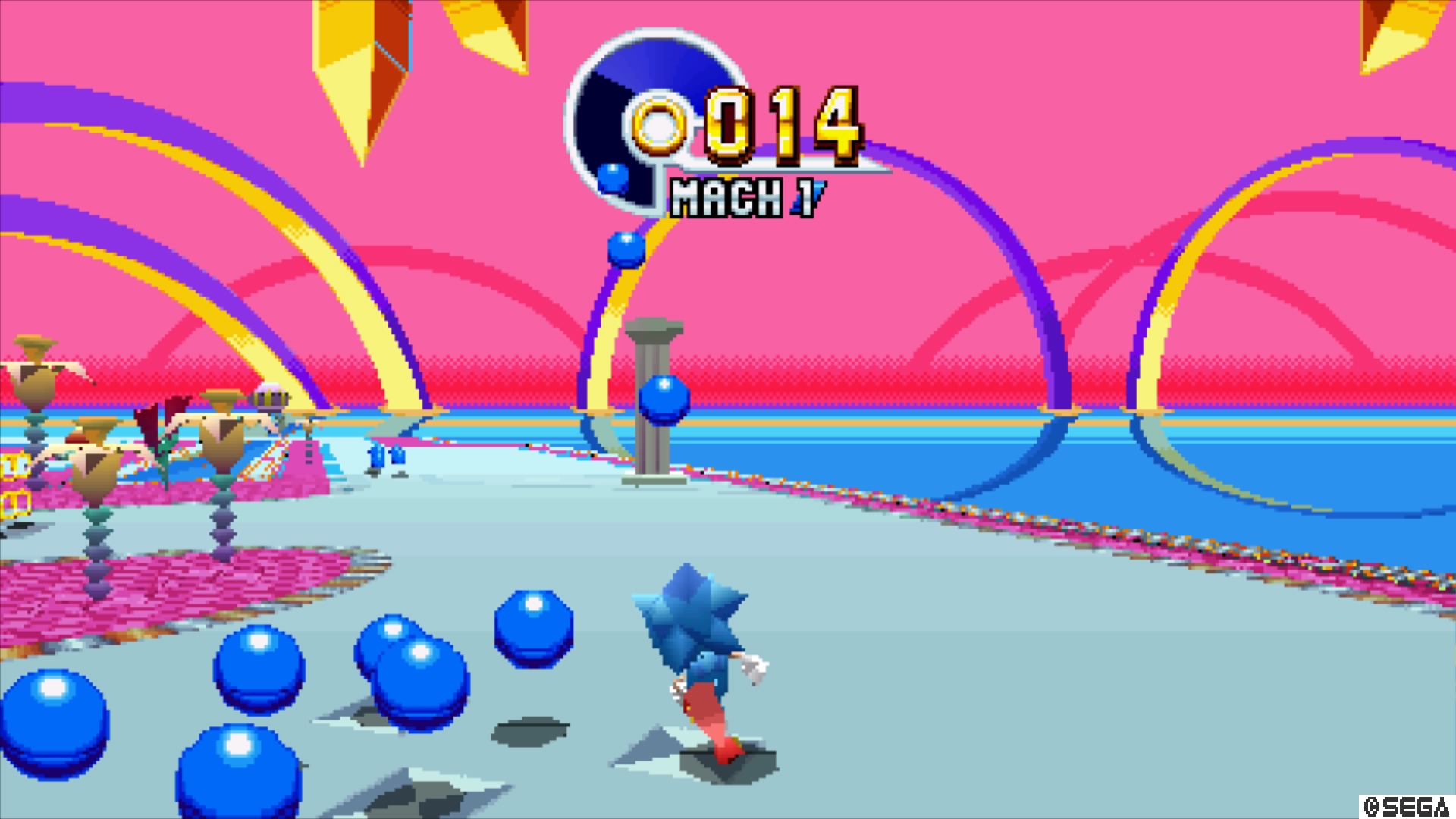 This clever mix of old and new elements makes Sonic Mania a new adventure in familiar trappings. Classic levels are draped in nostalgia — but after the first half of each, the retro stages tend to expand into almost completely new levels. The first act of Chemical Plant Zone might build upon the design offered in Sonic the Hedgehog 2, but act two mixes things up by introducing new obstacles and challenges. These remixed classic stages set the tone for the game’s all-original levels: By the time the player reaches Studiopolis, everything just feels natural.

The game offers tons of variety, too. New sphere-collecting challenges in the style of Sonic 3 can be accessed at every checkpoint, and Mania’s new Chaos Emerald special stage plays like a mash-up of F-Zero, Super Mario Kart and a bonus level from Sonic the Hedgehog 2. If you need a break from the game’s core platforming, there are plenty of options. 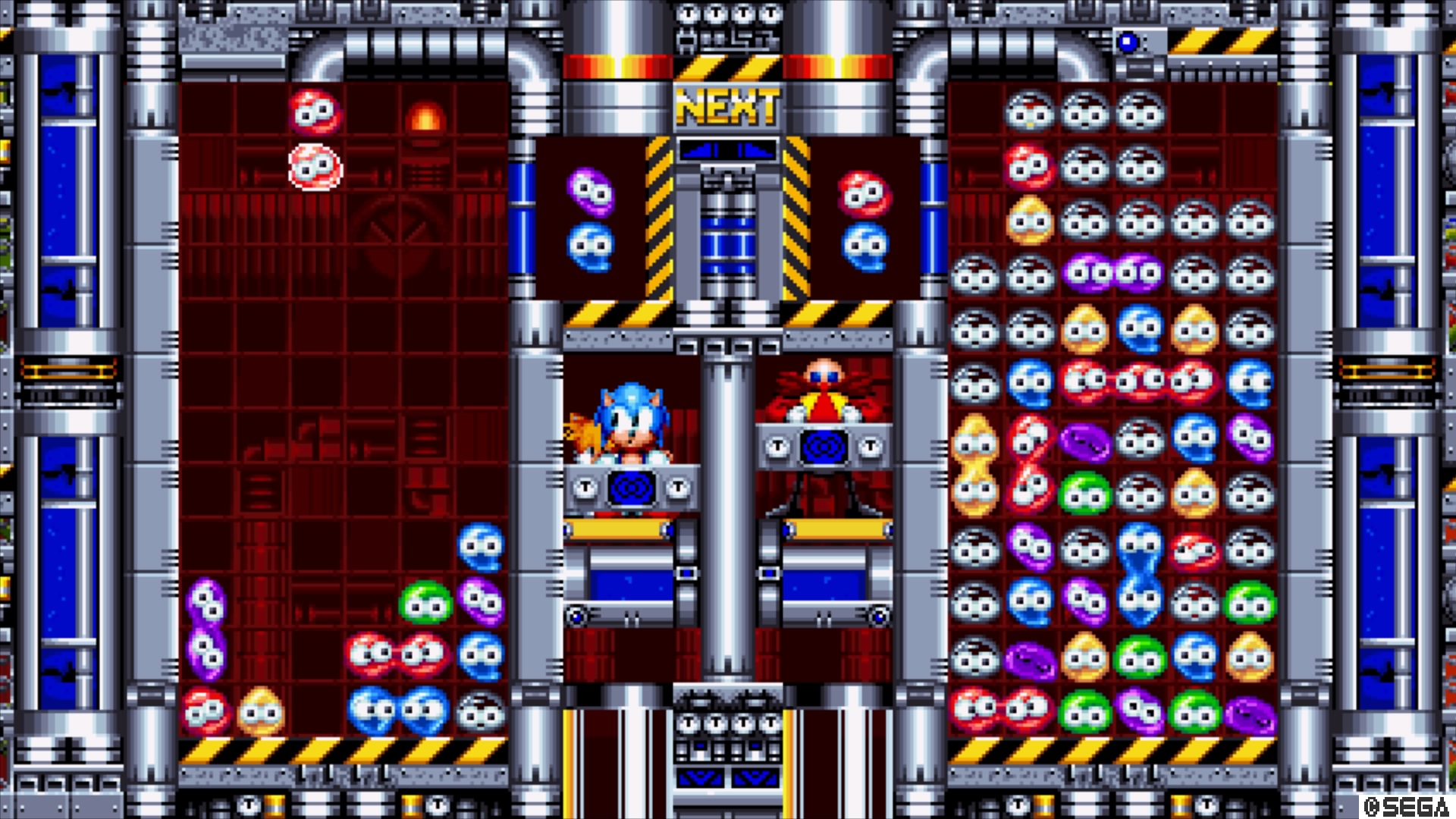 On its own, classic Sonic physics and good level design would be enough to make Sonic Mania good, but what makes it special is the reverence for all things Hedgehog. Throughout Mania, you’ll find nods to the series’ legacy. You might stumble across a reference to the Game Gear’s Triple Trouble or a sly nod to Sonic the Fighters. The game even pays tribute to Dr. Robotnik’s Mean Bean Machine, a bizarre Sonic the Hedgehog-themed port of Puyo Puyo.

It’s a fantastic classic Sonic experience, but the game does have some rough edges. At one point, I was told that I’d unlocked the Super Peel Out dash from Sonic CD and the Insta-Shield from Sonic 3 & Knuckles — but I could never figure out how to use either move in-game. There’s no clear list in the game’s menu to see what you unlocked, either. I was also a bit let down by the game’s visual filter settings. The default “clean” mode looks fine, but after seeing the more robust color-bleeding effects of the CRT modes in The Disney Afternoon Collection and the NES Classic Edition, simple scanline filters just aren’t that impressive anymore. Maybe I’m spoiled. 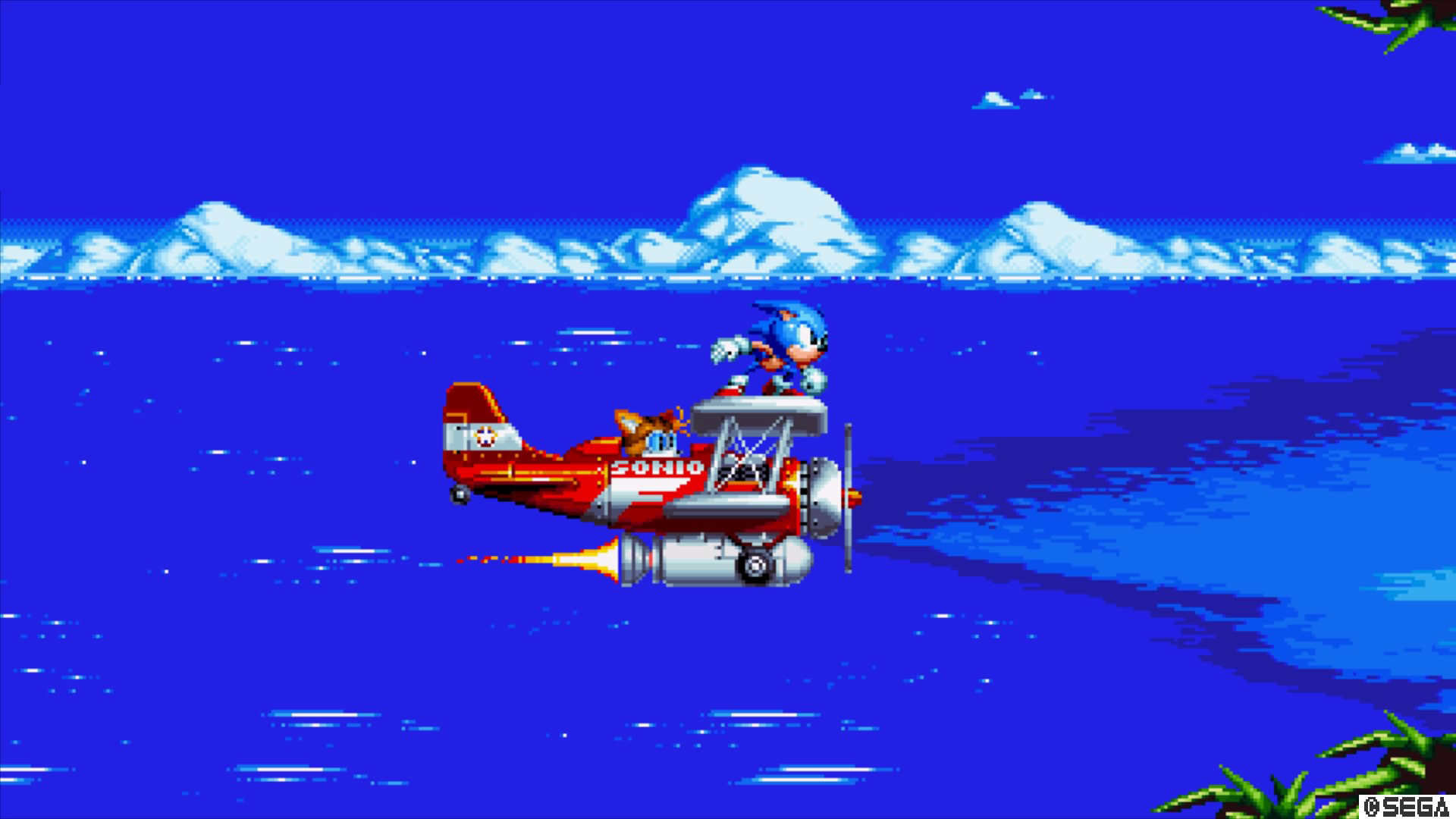 If you haven’t played a Sonic the Hedgehog game since 1994, Sonic Mania is exactly the game you’ve been waiting for. Everything about it feels like a natural extension of what Sonic was in the 16-bit era. It’s a nostalgia cash-in, sure — but that’s just the bait to reel you in. The hook to Sonic Mania isn’t its retro style, it’s the game’s excellent level design, catchy music and addictive platforming.