By Tim Barribeau and Nick Guy

For four years now we’ve tested sous vide cooking tools, and the Anova Precision Cooker Wi-Fi is the best immersion circulator for people who want to cook sous vide at home. It’s made by a lab-equipment manufacturer with a reputation for accurate water baths, and in spite of a relatively low price, it provides temperature precision on a par with that of significantly more-expensive machines.

A home sous vide cooker is mostly for food lovers and experimental cookers who love trying new techniques and recipes. Sous vide involves using a tool, such as the immersion circulators we tested here, to heat water and keep it at a set temperature. Then you seal your food—ideally within a vacuum—and immerse it in the hot water for hours at a time until the entire thing reaches a uniform temperature. The result? Steak that’s a perfect medium rare throughout (no cold, raw centers or overcooked outsides), chicken so tender that you don’t even need a knife, and eggs the consistency of custard. And for the most part, making that happen is easy. 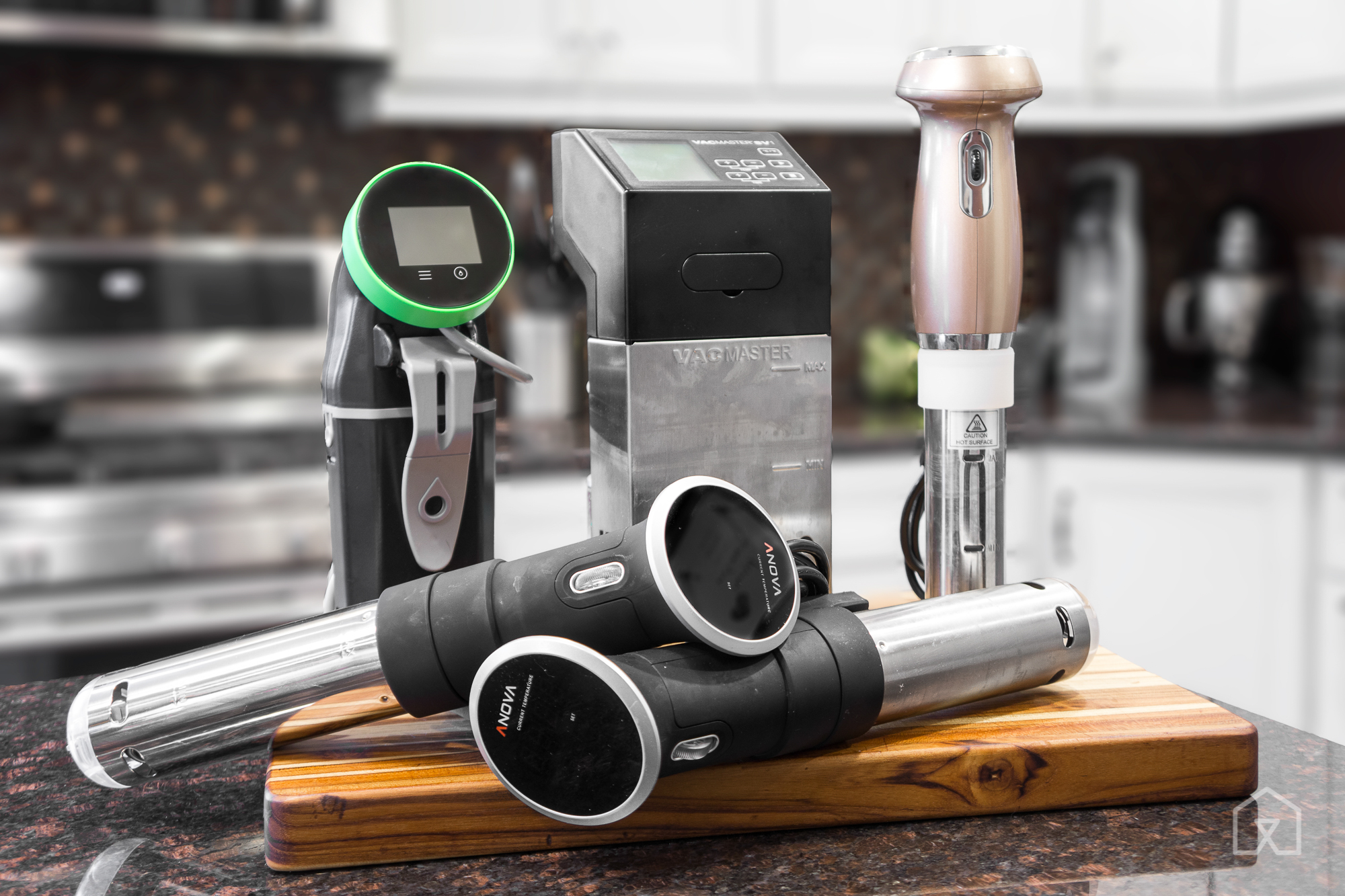 The immersion circulators we tested in 2016. Photo: Nick Guy

When you’re shopping for a sous vide cooker, you have four traits to look for:

Other criteria to consider are how the cooker attaches, its size, noise level, the types of containers it’s compatible with, and whether or not it has alarms and timers.

For our tests, we used each sous vide cooker to heat 1.5 gallons of water from 69 °F to 135 °F (the temperature for steak cooked to medium), measured the temperature at both points with the Thermapen Mk4 (an accurate instant-read thermometer) and recorded the time to get to temp. We covered the pot with foil to prevent evaporation, and we continued to let the circulators run for 12 hours—a longer time than your average recipe, but a good indicator of the machine’s ability to hold a set temperature indefinitely. 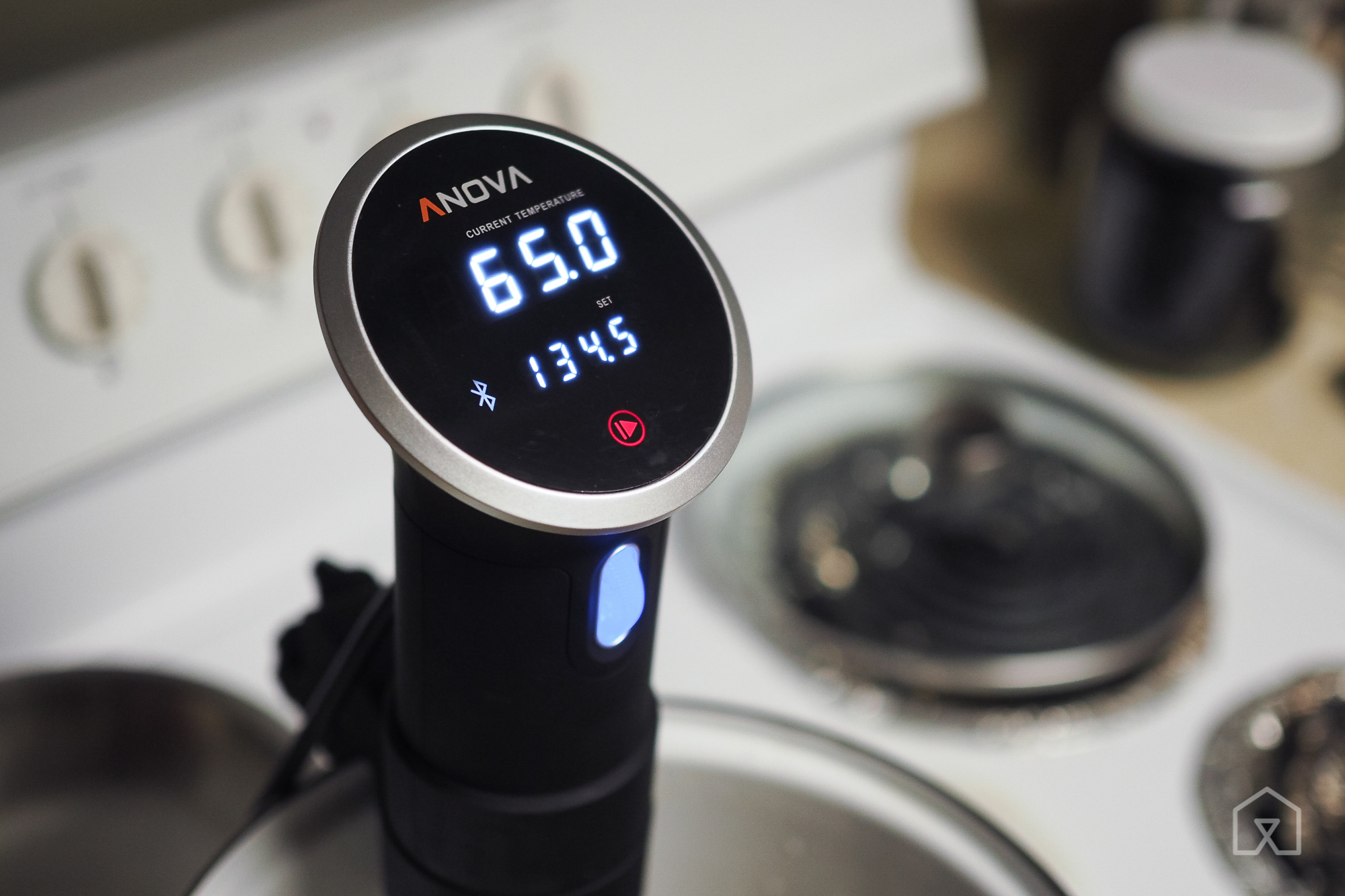 The Anova Precision Cooker Wi-Fi is the best bet for most home cooks due to its low price, relatively small size, and flexibility. The innovative adjustable attachment system works with as little as 2½ inches of water in almost any container. It has an intuitive interface with simple, scroll-wheel control, a small readout, and buttons to control a timer and connect to a Wi-Fi network. It has a 900-watt heating element and quieter performance than the competition. The Precision Cooker Wi-Fi is made by a lab-equipment manufacturer with a reputation for accurate and long-lasting gear, which is important for precise cooking.

You can connect the Precision Cooker Wi-Fi to your Wi-Fi network, which lets you control the circulator’s timer and temperature via the Anova Culinary app. This isn’t required, and you don’t lose any functionality by not connecting. 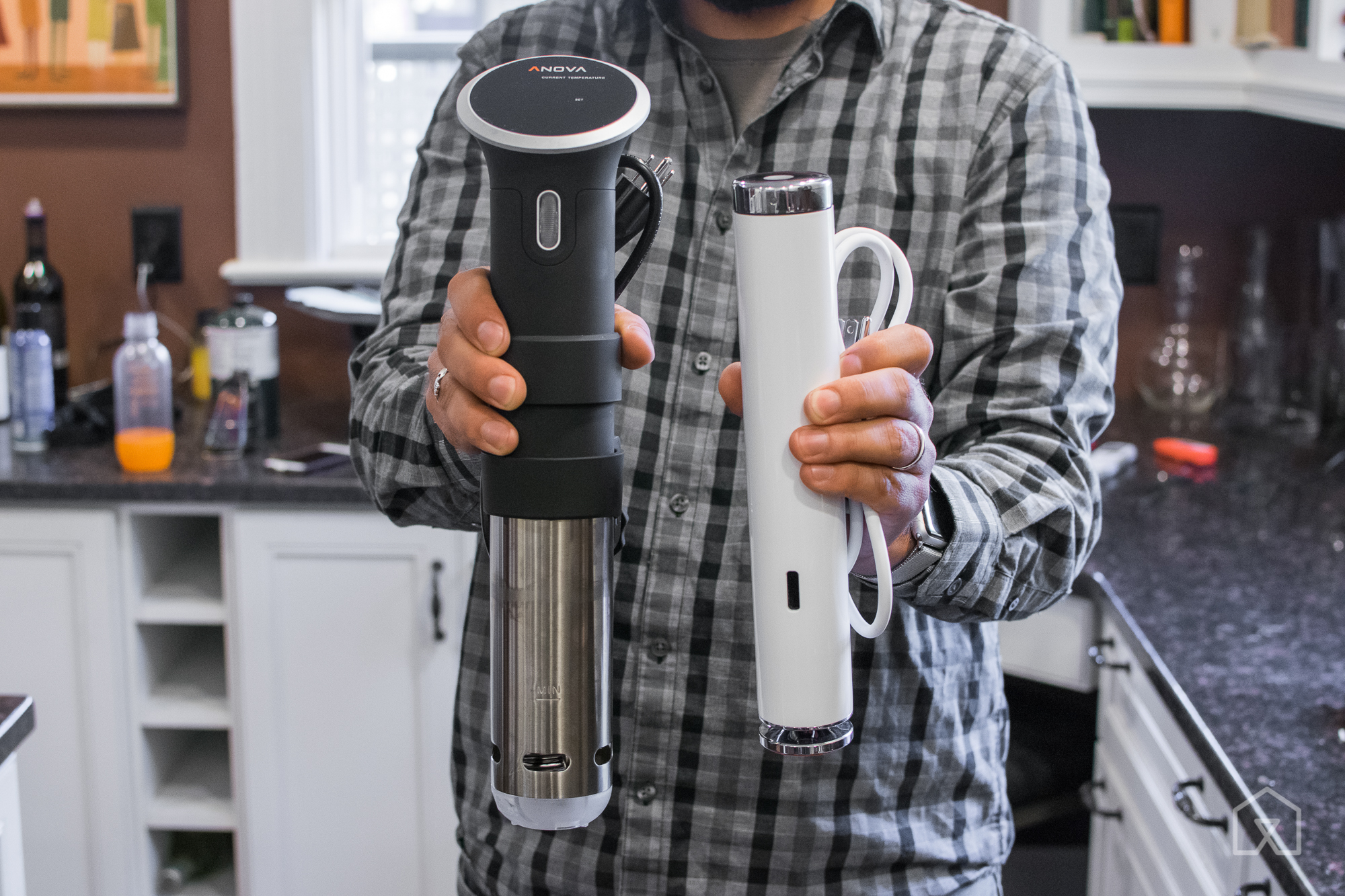 The ChefSteps Joule outperforms the Anova Precision Cooker Wi-Fi in a lot of ways. The most obvious is its size. This thing is impressively tiny—at 11 inches long and 1.85 inches in diameter, it’s about one-third the volume of the Anova unit and about half the weight, at only 1.28 pounds. The Joule is also more powerful, with a 1,110-watt heating element, and requires only 1½ inches of water to operate. It also has an ingenious magnetic foot that lets it stick to the bottom of some pots and other vessels.

ChefSteps’s app experience (iOS and Android) is particularly great. Pairing with the Joule is no issue, and once you’re connected, cooking is a breeze. The downside to the app is that it’s the only way to control the Joule. Other than the top cap, which you can use to stop the cooking, the Joule has no buttons or displays. This is the single reason the ChefSteps Joule isn’t our top recommendation. We know that for many people, the app-based control scheme will be just fine, but for others it’s a dealbreaker. 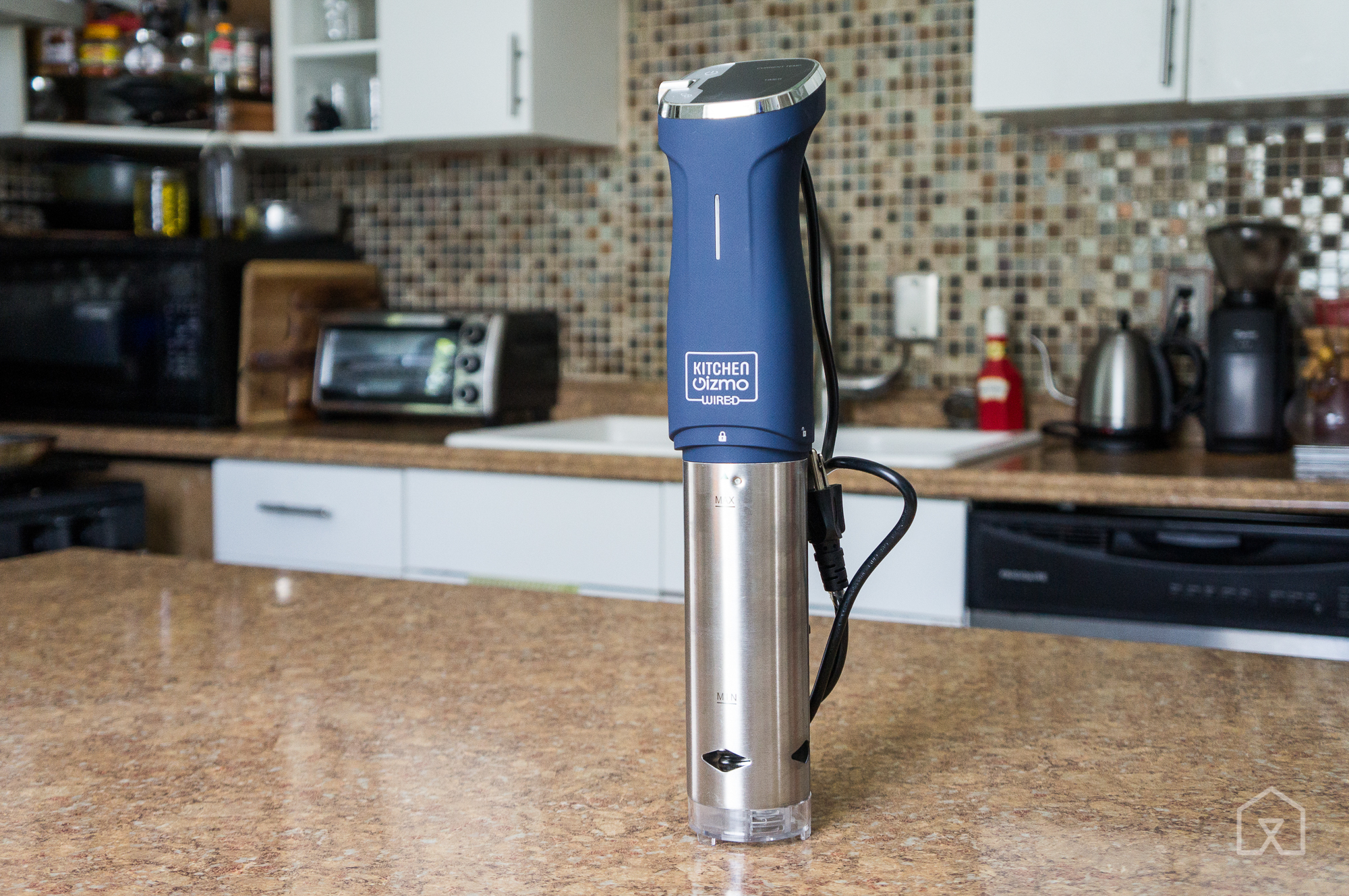 The Kitchen Gizmo immersion circulator isn’t as svelte as others, but it does a good job for an affordable price. Photo: Nick Guy

If you’re just getting into sous vide cooking and you’re not sure if you’ll take to it, or if you’re looking for an inexpensive gift for someone who loves to cook, Kitchen Gizmo’s Simplified Sous Vide Immersion Circulator is the best option. You have to give up some features and design elements for the lower price, but the Kitchen Gizmo does what it’s supposed to: This cooker gets water hot and keeps it there.

The Kitchen Gizmo cooker looks similar to the Anova model, though its clip isn’t adjustable. It also gives you a wheel mechanism to set the temperature and timer. For the budget price, you give up any sort of wireless connection; you control everything on the unit itself. The Kitchen Gizmo didn’t issue an alarm when it reached its set temperature, which is a downside, but we loved how quiet it was. From a foot away, it was practically silent. 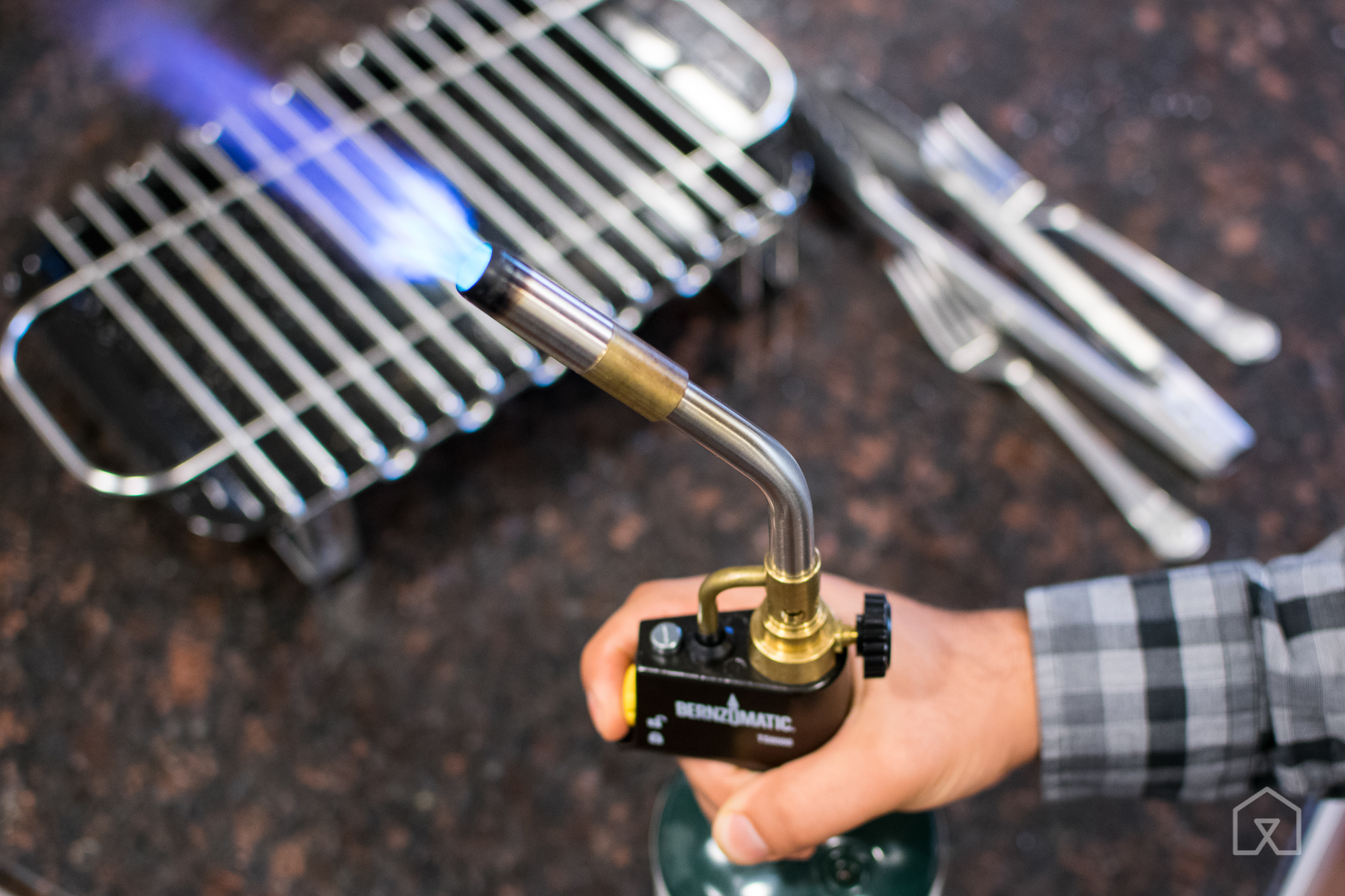 Cooking your meat sous vide gets you only halfway. The water bath brings the protein up to the proper temperature but leaves the outside the same color as the inside, without any of the tasty and texturally pleasing outer crust you’d get from other cooking methods.

We tested four torches along with the skillet method by cooking five New York strip steaks to medium-rare using the ChefSteps Joule, drying and seasoning them, and then searing.

We found that the best searing tool for most home cooks is the Bernzomatic TS8000, paired with a small propane tank. It seared our New York strip steaks faster than most other methods (in about a minute and a half), and it didn’t leave any off tastes from the gas. It’s less expensive than most of the competition, and has a flame-control adjuster. In our tests, the high-powered flame made quick and easy work of the process.

Read more from News
← Definite protection against Ransomware
After Math: Come out and burn →