Don’t look now, but Google has yet another messaging service — sort of. Today, YouTube announced that it is rolling out a new in-app direct messaging feature, much like what you’ll find in Instagram. Google’s been testing and teasing this feature for over a year now, but after taking user feedback into consideration, the company is rolling it out to all of its users around the world.

As noted, it’s not dissimilar to what Instagram has been doing with its own direct messaging features that arrived in December 2013. When users tap the “share” button on a video, they’ll now have the option to send it directly through the YouTube app to their contacts. The share pane shows people you’ve recently chatted with, as well as some suggestions for people to add to your list. When you tap the “add contacts” button, the app asks if you want to pull in people from your phone book or send an invite link. 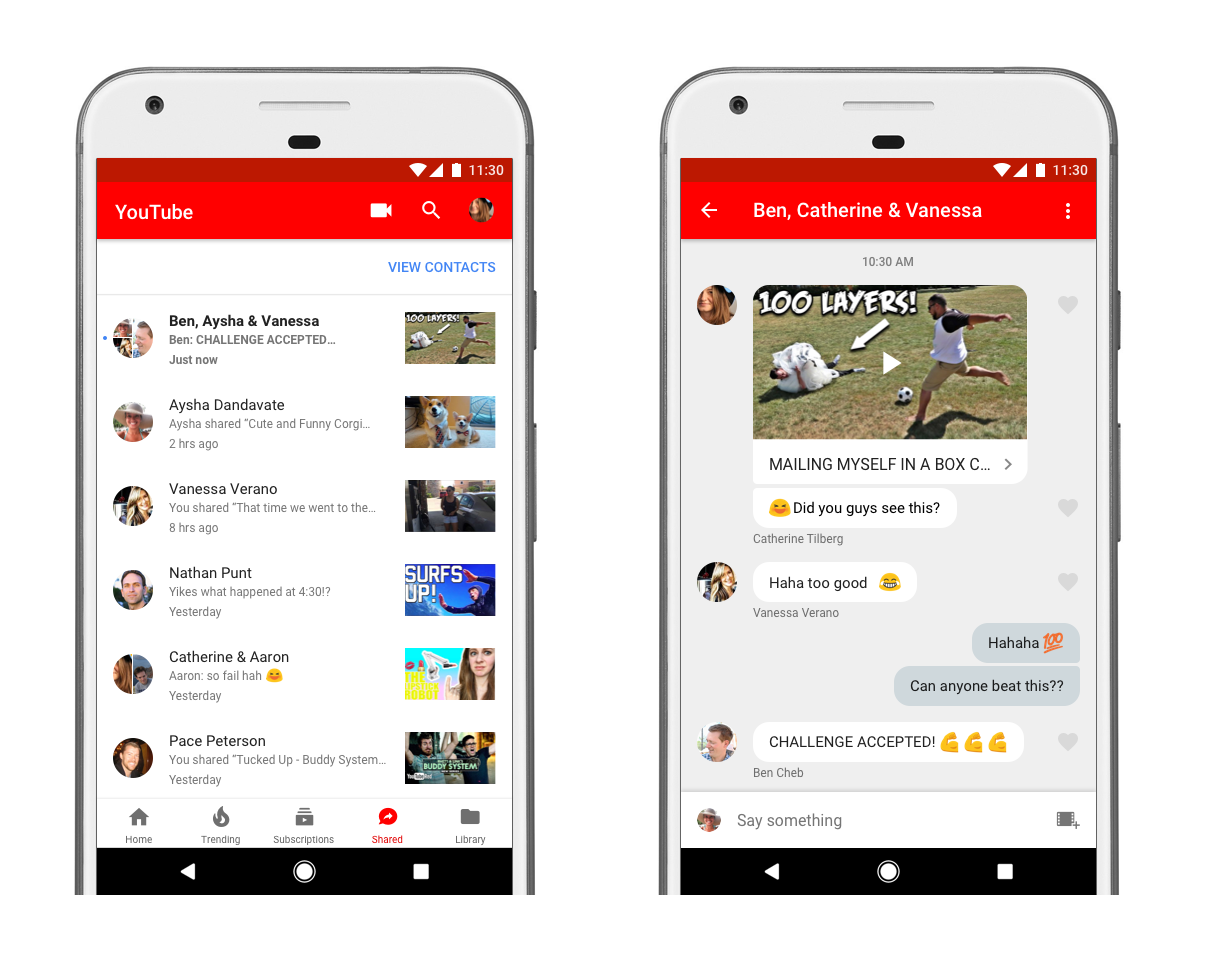 Sadly, the phone book doesn’t actually show whether or not your contacts are using YouTube; it just pulls up a “add me as a contact on YouTube” message and dumps it into an SMS. It would be a lot more elegant if the app could recognize which of your friends are signed into YouTube and just start the conversation there. That’s the challenge with what YouTube is trying to do here: It’s easy enough to just use the standard Android or iOS sharing pane to drop a video into iMessage or your chat app of choice, but it’s beneficial for YouTube to keep the conversation going on its own platform.

YouTube’s suggested contacts feature makes it a little easier to get started sharing things. With those people, you can send and confirm invites within the app itself, no SMS needed. Google says those suggestions take into account which people you interact with on YouTube and other Google services, which is to say, people that you email or chat with in Hangouts will presumably show up here as well. Regardless of whether you invite someone through SMS or in the app itself, once the invite is accepted you can freely share videos back and forth.

Fortunately, this new feature works pretty well once you get past dealing with contacts. Once you share a video (your first conversation with a contact needs to be initiated by sharing a video), you and your friend can just chat about it right in YouTube. Whether just one-on-one or in a group, you can chat just as you would with basically any other chat app. Naturally, there’s a button right in the compose area to drop another video into the conversation. Pressing it pulls up your most recently viewed videos, but you can also tap a search button to find basically anything else you’d want to add to the conversation.

Given YouTube’s focus on video, you can only add other videos to the conversation. Otherwise, you’re limited to text and emoji. There are also limited “reaction” features; users can add a heart to any message or video dropped in their chat. But other than that, YouTube wisely keeps things basic here, as there’s no real need for this to compete with more full-featured chat apps like Facebook Messenger, iMessage or even Google’s own Alto.

Indeed, this new feature will probably be most utilized by heavy YouTube users — probably the kinds of people who frequently upload and create their own videos as well as just watch. But even more casual YouTube users will probably find themselves using this new feature pretty quickly. The in-app option is now the default way to share YouTube videos, so chances are good that you’ll either send or receive a video like this pretty quickly.

And while it’s easy to chide Google for coming up with yet another messaging system, it’s also something the company had to do to keep people sharing video on its platform instead of through other apps. Instagram made in-app sharing and messaging a focus over the years, and it makes sense for YouTube to do the same — it helps control the experience users have and makes it more likely they’ll keep sharing more clips. Fortunately, YouTube implemented this feature in a way that makes sense and is easy to use, my one qualm about SMS invites aside. If it means my friends are more likely to share ridiculous videos with me, so much the better.