The internet has a fantastic ability to embrace a joke, and then beat it to death faster than you can mumble “my name’s Jeff.” From Hobo With a Shotgun and Kung Fury through to Goat Simulator and Snakes on a Plane, what works as a 60-second gag rarely has staying power.

It’s the biggest concern anyone should have going in to Dan Marshall’s indie football soccer game, Behold the Kickmen. It started out as a joke that Marshall, creator of The Swindle, made on his Twitter feed, with him saying that he’d create a soccer title despite knowing nothing of the sport.

A year and a bit later, and Marshall, egged on by his followers, has produced Kickmen as a standalone title. It’s a soccer simulator written by someone who claims to know nothing of the sport, if you’ve ever seen Mitchell and Webb’s glorious satire of underdog sports movies, you’re 90 percent there.

Kickmen is, as the marketing doesn’t make painfully clear, the world’s most faithful and accurate soccer simulator ever made. The circular arena holds nine players on each side, eight outfielders and a “goldkeeper” while an umpire governs the action.

The aim of the game is to do a goal, into the enemy team’s net, by kicking or walking the ball toward it. The farther away you do this from, the more goals you score, so a short tap-in earns you one point, while a punt from the halfway line earns you three.

There are other features that, of course, folks totally confident of their football soccer knowledge will be familiar with. Such as extra time, where players can run into a floating clock icon on the field to extend the match’s length, and offside, where part of the screen is deemed offside.

In addition, Kickmen comes with a “Future Dystopian Reskin” option that swaps out the football soccer for a more Speedball-esque vibe. Which is good, because the game’s primary influences are both Sensible Soccer and Speedball, as explained by Marshall early on in its development.

The game advises you to begin with the tutorial, then the story mode, then finally the quick-play option, which lets you tweak every element of the game, including team size. And you should, because many of the more-nuanced elements of Kickmen’s gameplay take some getting used to.

When you begin the story mode, your team will have almost none of their core abilities, including passing and tackling. You’ll need to buy those by raising money, which is done by winning games and impressing the fans in the stadium. 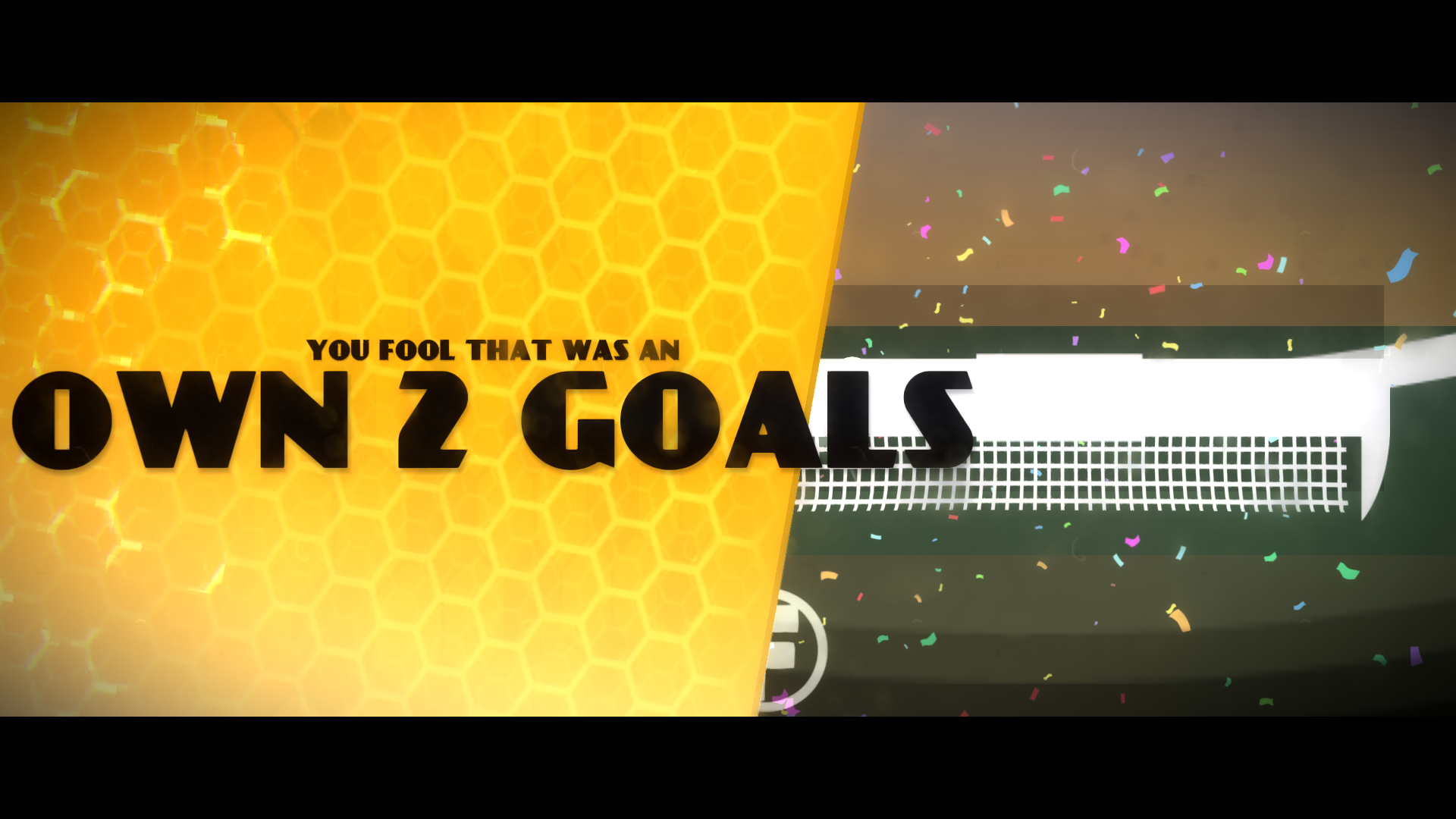 A mistimed pass towards my own goal resulted in a spectacular own two goals. Woe.

Users are only able to control whichever player is closest to the ball, with the system switching between them automatically. They then dribble the ball around the enemy at a frustratingly slow pace and attempt to avoid tackles until you can afford to buy the sprint and sidestep (“Dash”) abilities.

If you’re used to more responsive, and immersive football games, then Kickmen’s learning curve is steep. Not being able to select the player you’re controlling, and the AI’s tendency to swarm everyone around the ball makes tactical play a lot harder. During moments such as extra time, when you need a player to collect an icon, the auto-switching system can hamper your progress. But these flaws also make the game difficult to master, in the way that you dimly remember from older console titles that made you work for your entertainment.

There are certainly moments during play when you wish that Marshall’s feigned indifference to the sport was less prominent. Because, deep down, the game is densely packed with the sort of ironic misuse of footballing terms that only someone familiar with the game could successfully achieve. 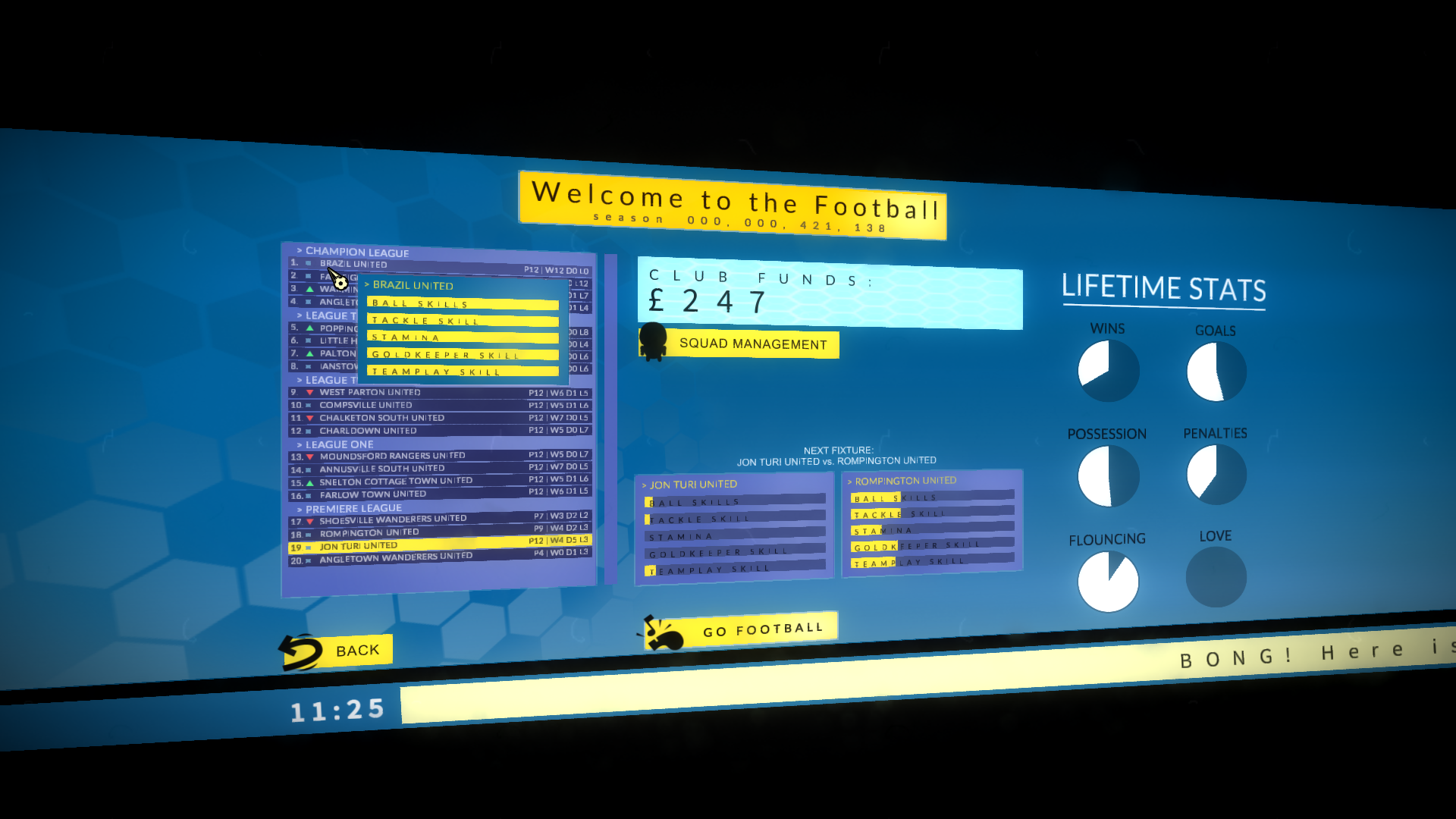 In terms of atmosphere, Marshall recruited friends and followers to record chants and cheers for the virtual stadiums. At various points, you’ll even hear exasperated fans ask you to “do a goal now,” as well as one asking you to hurry up and win as they need to use the bathroom.

The soundtrack will likely divide users into those who love their womp-womp heavy EDM and those who do not. It’s likely that you may, over time, gradually reduce the in-game music for your own tunes when you gradually tire of the repetition.

The soundtrack will likely divide users into those who love their womp-womp heavy EDM and those who do not.

The story mode itself begins like the career mode of many a football sim, with your awful team sat at the bottom of the league. Only by playing beyond yourself and earning cash can you upgrade your team and progress up the league table football spreadsheet.

Although the game’s presentation makes it look like it runs in a league format, users will instead play each team consecutively until you beat them. Which can prove problematic when you come across a superior group of players who are blocking your route to upgrades.

Behold the Kickmen may have started out as a joke, but it manages to avoid becoming grating or one-note in its execution. It stands both as a joke and a meta-joke at once, as a commentary on the cynicism of football, the business of football games and game development itself.

Then there’s the branching-story mode, which sees your hotshot young striker rising through the ranks and uncovering the secret of his father’s death. Every line of dialogue could have been cribbed from a thoughtful parody of a high school movie, with the football bully taunting your progress.

There’s a term, ludonarrative dissonance, describing where a title’s narrative and its gameplay are in conflict. Behold the Kickmen is (very) funny, and fun to spend time with, but playing the game is its weakest element.

After all, the tutorials are intentionally surreal (and obtuse); the branching, RPG-style story dialogue is comic; and even the rolling news chyron is a machine gun for gags. But you’d rather spend time there, reading the increasingly-ludicrous headlines than actually in the stadium. Not that it was expected, but a lack of local multiplayer — which sports games usually thrive on — also dents the enthusiasm. That’s probably unfair, because the gameplay, while fiddly and frustrating, is enormously satisfying when it begins to work. After a few frustrating games, my star player, Billy Steele of Jon Turi United, managed to do three goals after a lucky punt from the halfway line. You could hear my bellow of delight from half a street away.

Behold the Kickmen is available on Steam for Windows, setting you back $3.99 / £2.79, a figure that’s so small that you can’t not buy it.