Splatoon for the Wii U made a strong argument for competitive multiplayer gaming on Nintendo consoles, but in a lot of ways, it was half baked. It had great characters, fun maps, ranked modes and tournaments — but failed to integrate any kind of official voice chat. It also had a companion web portal, but it offered only the barest of functionality. The game’s Nintendo Switch sequel is trying to fix both of those problems with SplatNet 2: a smartphone app that lets players view match and player stats, buy in-game gear and organize voice chat with teammates.

Technically, SplatNet 2 isn’t its own app, it’s a service built into the company’s upcoming Nintendo Switch Online app. That sounds minor, but it’s a huge improvement — Nintendo’s original SplatNet experience was built into a clunky web experience. It translated poorly to smartphones and offered only the barest amount of information: what maps were in rotation, what rank the player had and what gear they were wearing. The new app takes all of those features to logical conclusions: players will be able to view their past 50 matches in detail, including player loadouts, names and an overview of the score. Gear integration has been taken up a notch too — not only can you view gear, but you can use in-game currency to buy it in the smartphone app, making it available next time you pick up the game on the Switch. 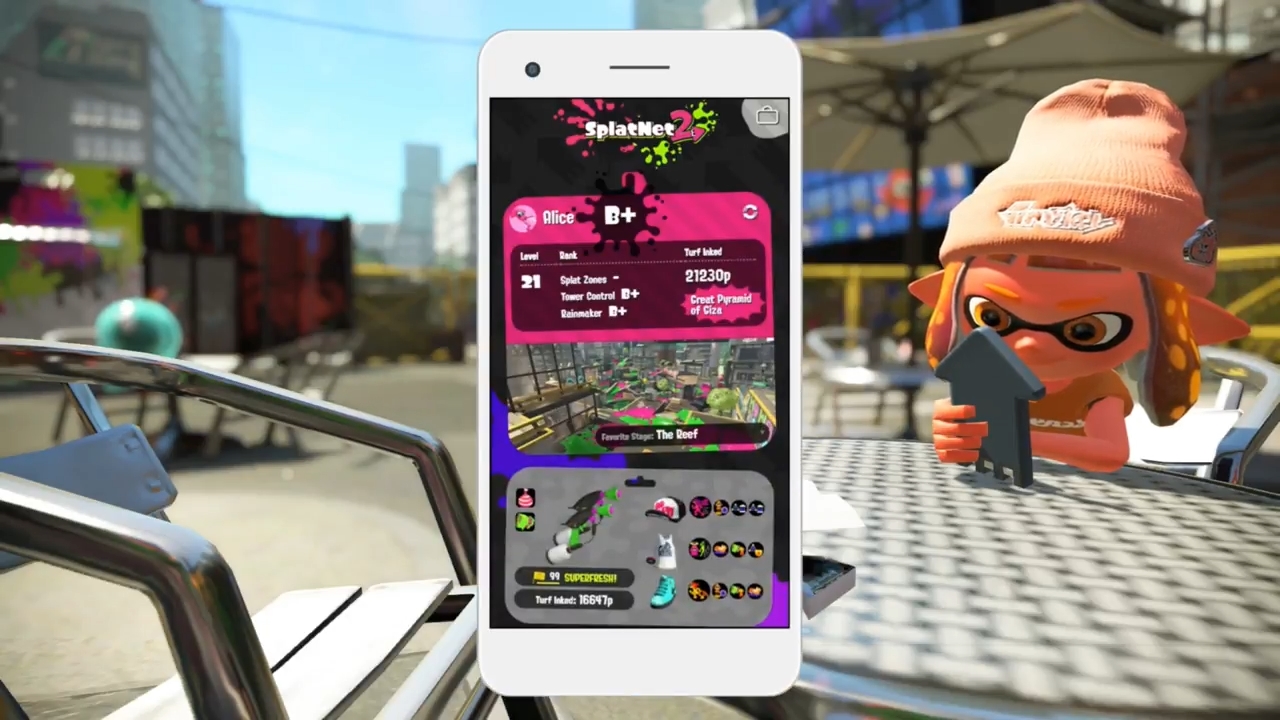 The app has a few fun tools, like a meter that shows the total amount of ground you’ve covered with ink in-game and compares it to real-life landmarks — but the app’s killer feature is probably voice chat. The app will automatically drop you into chat with players on your team, but it can also be used to invite friends to join you in-game and in-chat. That’s a huge step forward for Nintendo in terms of online communication, but it’s still a little weird. Because the entire voice chat system is handled through the smartphone app, players who want to hear the in-game audio and participate in voice chat will have to buy cumbersome, wire-laden accessories to physically link their phone to their console.

Right now, the app only promises to allow voice chat between players in-game, and it’s not clear if the Nintendo Switch Online app will let friends chat cross-game, but integrating SplatNet 2 into the official app, at least, seems like a step in the right direction — integrating the shooter’s web-portal into a real app experience. So far, Nintendo has only announced Splatoon 2 for the online app, but it seems like it will be the online hub for all of the company’s multiplayer games moving forward. Want to try it out? You won’t have to wait long — the Nintendo Switch Online app launches on July 21st with support for Splatoon 2. Hopefully, the logistics of voice chat accessories won’t ruin the experience.