Huawei’s Watch 2 can last for weeks without its smarts

I’m a firm believer in the usefulness of smartwatches, but even I can’t deny that the product category is struggling. Despite Apple joining the fray with its first Watch two years ago, wearables still haven’t taken off with mainstream consumers. Google’s latest update to its wrist-based OS just started trickling out to the public, and it brings new features that make smartwatches more functional. Even then, there are problems with these devices’ battery life and design. It is in such a challenging time that we are introduced to Huawei’s Watch 2. It’s the company’s new Android Wear 2.0 device, and it already faces competition from LG, ZTE, Fossil and Tag Heuer. Fortunately for Huawei, the Watch 2 stands out thanks to its impressively long-lasting battery, comfortable design and reasonable price.

The black version I received isn’t exactly stylish, but I didn’t hate its sporty aesthetic. In fact, I was happy to see how well it matched my spring outfits, most of which involved black leather or denim. The watch’s rubber strap and relatively small footprint makes it more comfortable than the competing devices I recently reviewed. Huawei also offers a more-expensive Classic model, which has a less-sporty design, a plastic-and-stainless-steel case and a premium leather-and-rubber hybrid band that’s just as flexible.

Despite housing sensors for NFC, GPS, Bluetooth as well as a heart rate monitor, the Watch 2’s case is surprisingly thin and light (1.41 ounces), although it is still larger than an Apple Watch or a regular timepiece. Its ceramic bezel is not only lightweight, scratch-resistant and helps dissipate heat, according to Huawei, but also six times harder than the stainless steel used on most competing devices. Oh, and it looks polished, to boot. 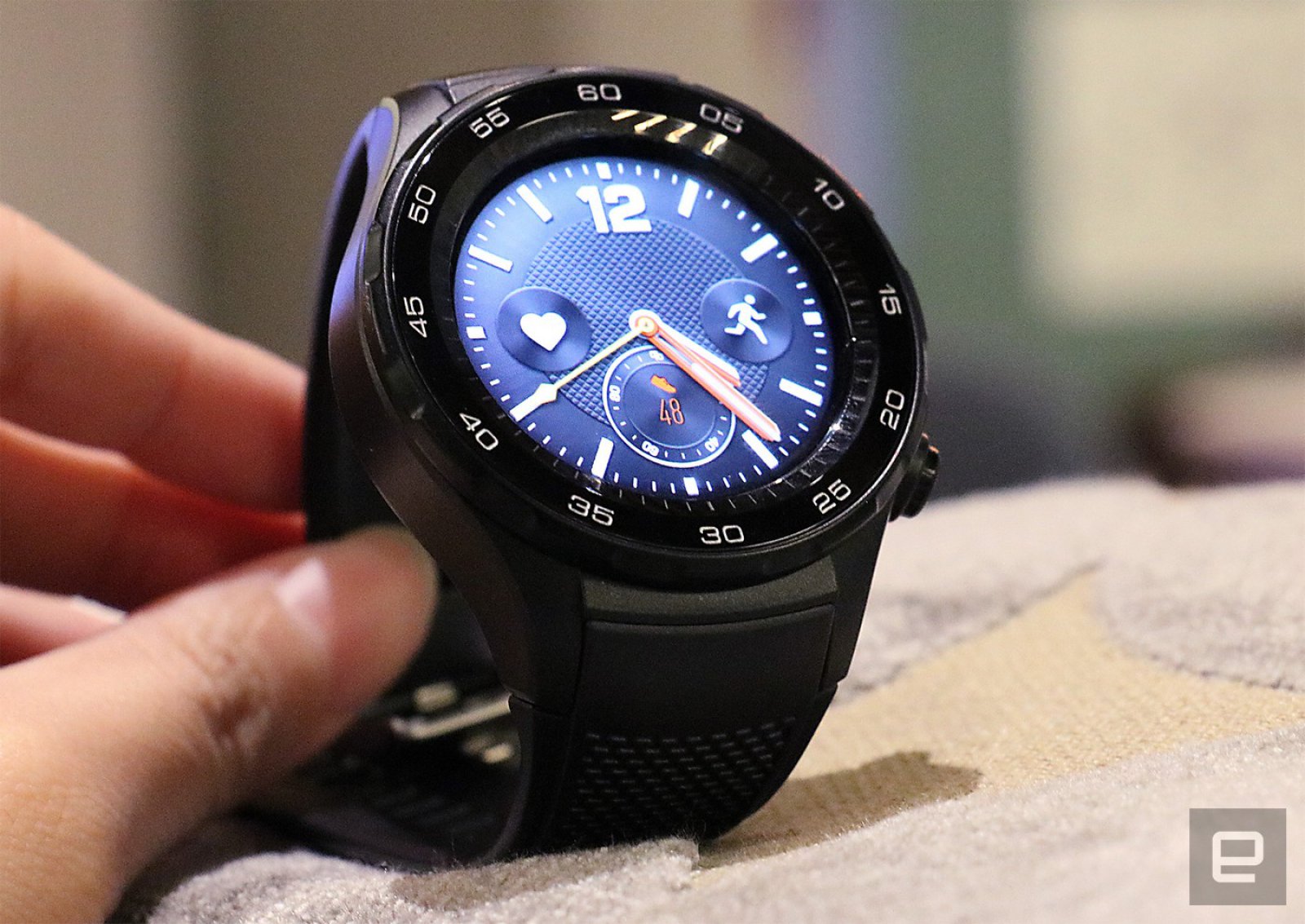 The watch’s 0.49-inch plastic case is also thinner than many other Android wearables, which average about 0.57 inches, but that’s for the ones that have a cellular radio onboard. On the case’s edge sit two buttons at the two- and four- o’clock positions which bring up the apps list and Huawei’s workout mode respectively, but you can set the bottom key to launch any other app.

Moving on to the Watch 2’s round 1.2-inch screen, then. It’s bright and colorful enough to read, even in sunlight, and its 390 x 390 resolution is adequate for the small texts and images you’ll be swiping through.

You can also control the Watch 2 with your voice. This mostly happens through the Google Assistant, which you can summon by saying “OK Google” or long-pressing the top button on the side. Thanks to the onboard speakers, you can also play music from the watch itself, and you’ll have about 2.3GB of local storage to use. You probably should pair a set of Bluetooth headphones for better audio quality, though. Despite the lack of cellular support, the Watch 2 can still make calls over WiFi if it’s paired with an Android phone, and the onboard speakers come in handy here, too. 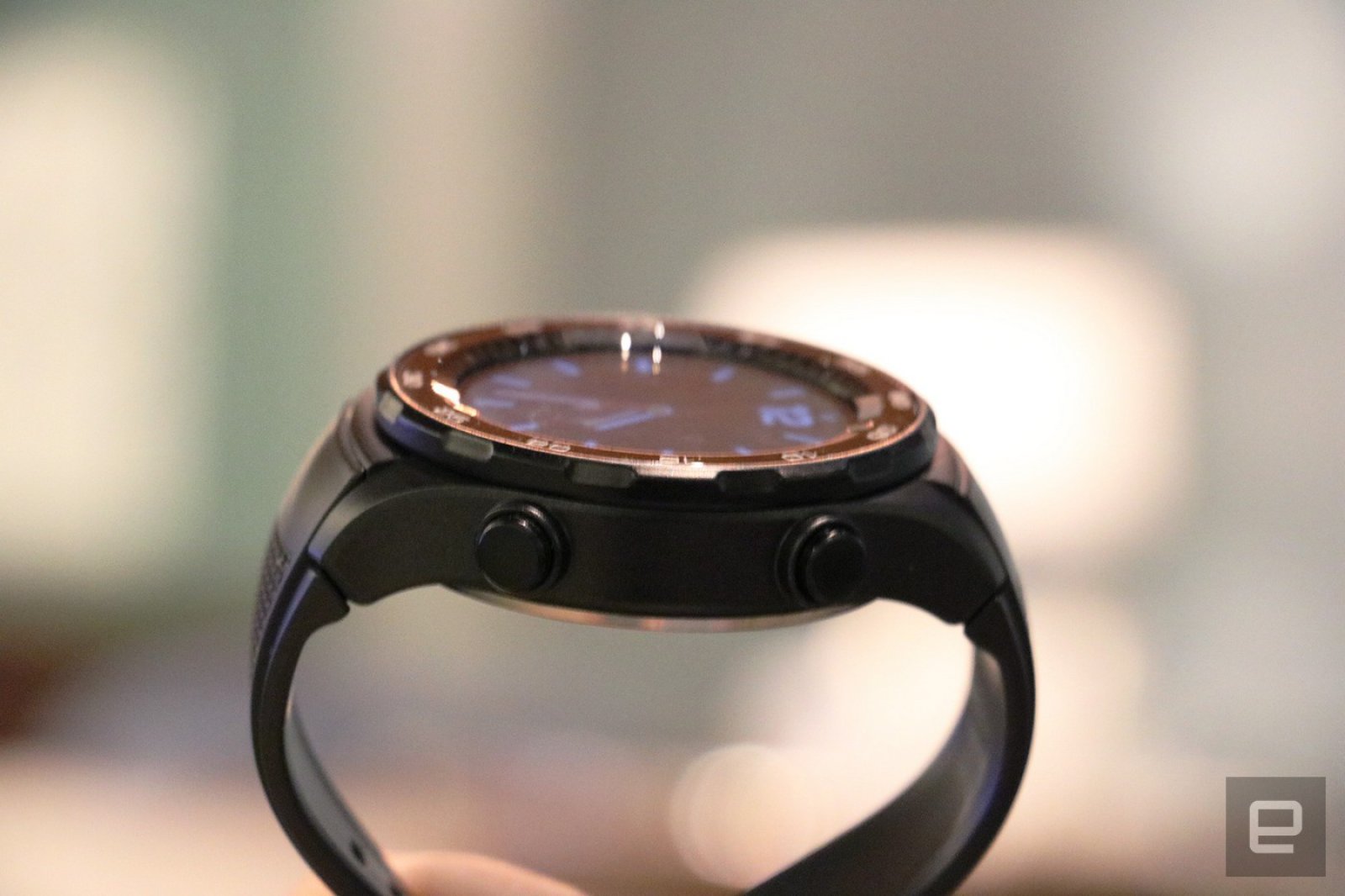 This is a good time to mention that the Watch 2 uses a 1.1-GHz Qualcomm processor. It’s generally pretty responsive, though there are occasional stutters, especially when Google Assistant is trying to interpret my commands. That being said, most Android Wear 2 devices seem to have this problem.

One of the highlights here is Huawei’s Health app, which uses all the data it tracks, like your heart rate and distance traveled, to deliver a more comprehensive picture of your workout. Unlike Google’s own app, it offers personalized coaching and tracks your cardio performance for activities like running, walking and cycling. The device will prompt you to speed up or slow down depending on your pulse, so you can achieve the appropriate cardio zone for the results you want (i.e. fat-burning versus interval training).

The watch will also prompt you to move when it detects you’ve been idle for too long. That’s pretty standard for most wearables today, but Huawei also displays a colorful cartoon that suggests some exercises you can try.i 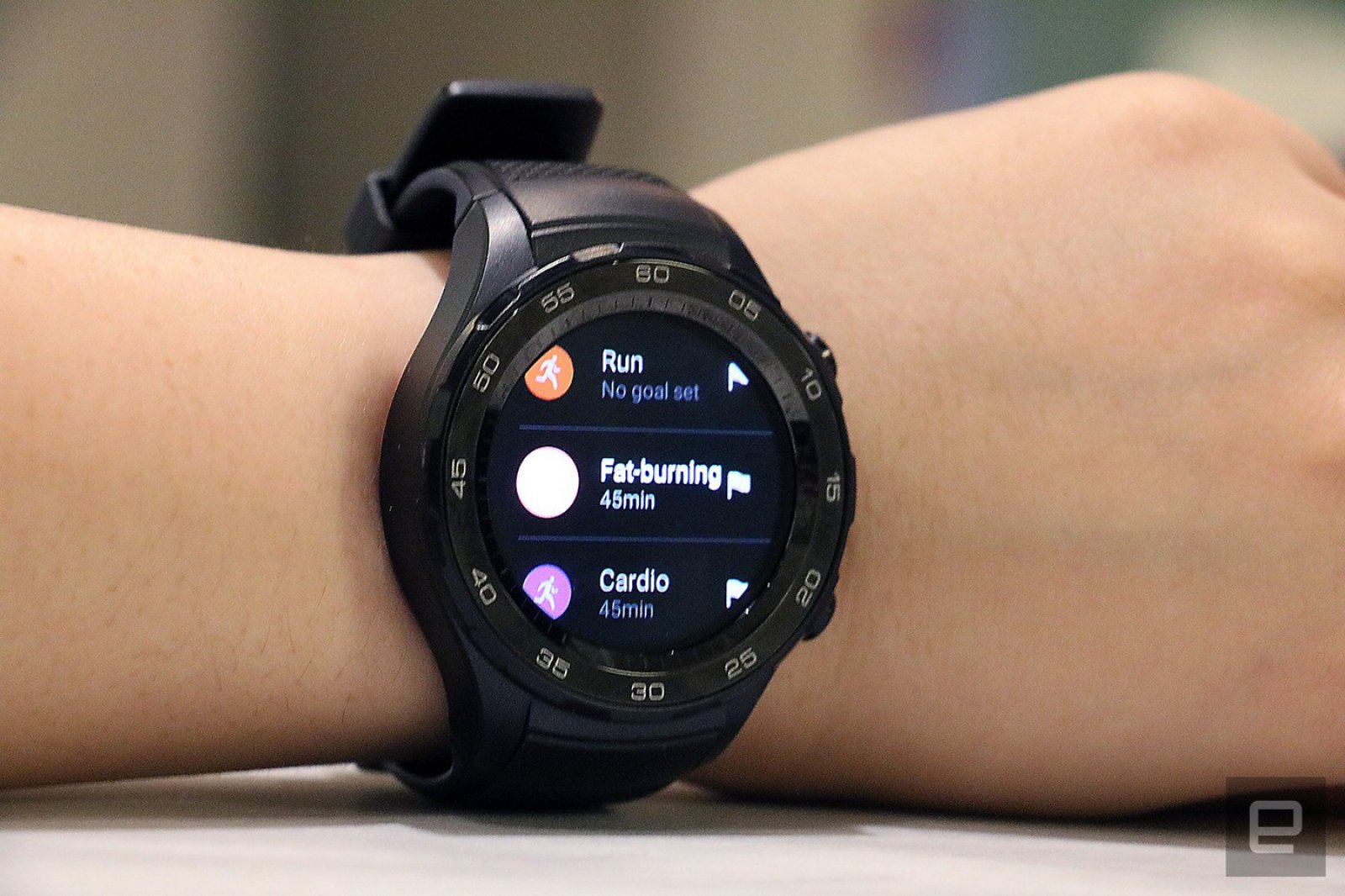 To make full use of the activity-tracking features, you can launch Workout mode, which will make the Watch 2 continuously track your heart rate and position with the onboard GPS. In this mode, Huawei says the watch’s 420mAh battery will last about 10 hours. Under normal use, the company promises a two-day runtime. In my experience that seems about right, which is a pleasant surprise since most Android Wear 2 devices barely get through a day.

Huawei also offers Smart Power and Watch modes that let you stretch a charge by an impressive amount. Smart Power disables the Always-On screen and dims the brightness to squeeze a few more days out of the device. But Watch mode ditches everything except step counting and time telling, which will supposedly give you up to three weeks of juice. During my testing, I got through two days on normal use, and eked out two more days when Watch Mode later kicked in automatically. That’s far longer than any other Android Wear 2 device I’ve tested. 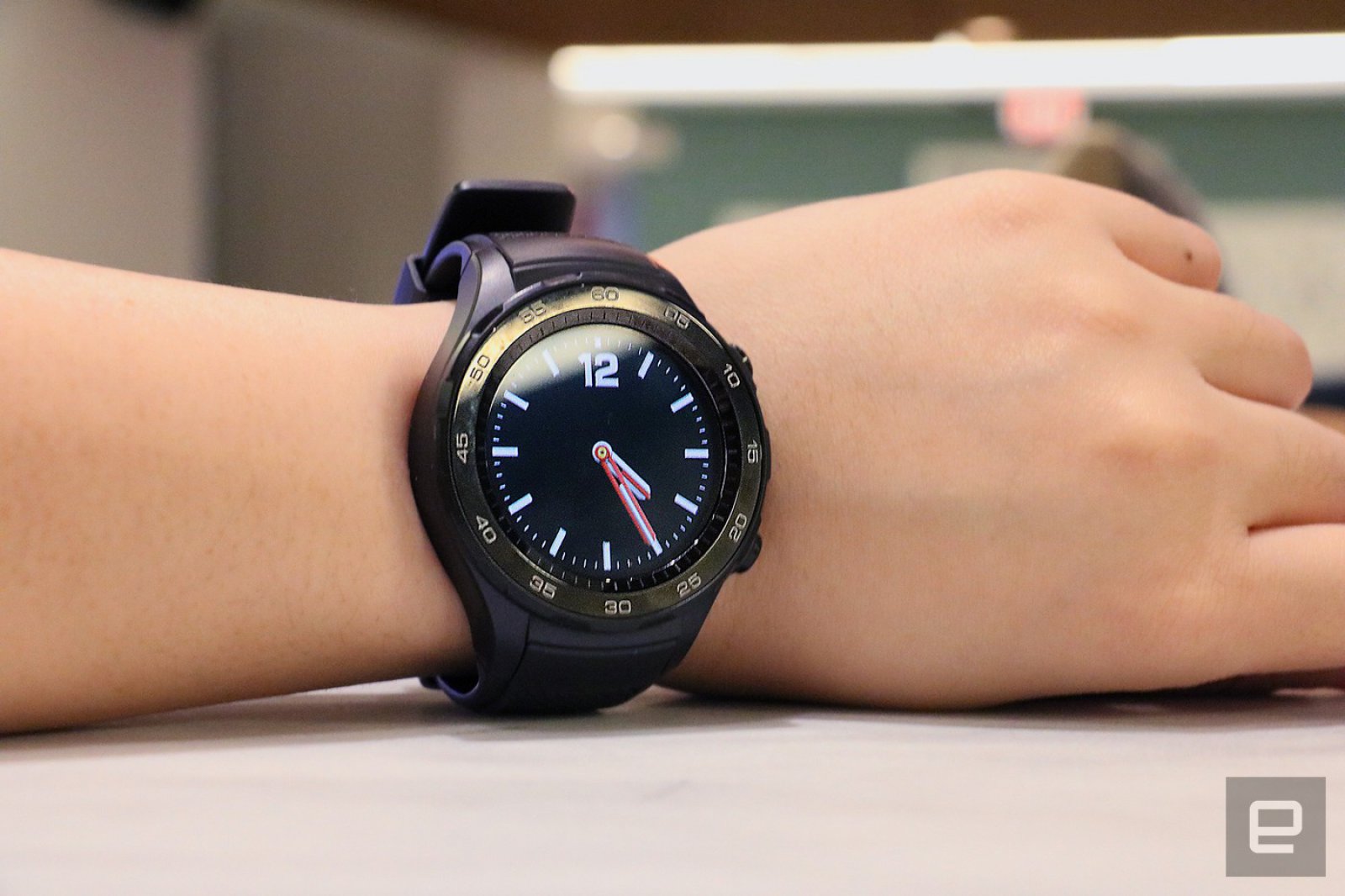 You know a feature is actually useful when you find yourself asking, “Why on earth hadn’t anyone else thought of this before?” Watch Mode is an intuitive power-saving setting that doesn’t appear to require too much to implement, so it’s baffling that other smartwatches don’t already do this. To be fair, many Android Wear watches offer a form of low power mode that dims the screen and disables always-on display to stretch battery life. But none of them have been able to achieve the longevity Huawei is touting here. If applied to other devices in future and combined with other energy-efficient battery technology, this could eventually alleviate one of the biggest problems facing smartwatches.

Ultimately, the Huawei Watch 2 stands out for its long-lasting battery wrapped in a surprisingly comfortable design, and all for a reasonable $300. Its robust fitness-tracking features, as well as support for GPS and Android Pay, add to its appeal, making it one of the best Android Wear 2 devices on the market.

Read more from News
← Ford adds Android Auto and CarPlay to its 2016 vehicles
Destiny 2: Release date, screens, formats and everything you need to know →