After more than 100 hours of research and testing, cooking more than 200 pounds of rice, and talking with rice experts specializing in Japanese, Thai, and Chinese cuisine, we recommend the Hamilton Beach 37549 2-to-14-cup Digital Simplicity Rice Cooker and Steamer for most people. It’s an outstanding value that’s well-suited to most households that want the ease and convenience of no-fuss, no-burning cooked rice.

Who should buy this

Though rice cookers have their roots in Japanese, Korean, Chinese, and other Asian cuisines, they’ve become a frequently used tool for many international cooks, including those preparing Latin American dishes. Here in the US, rice cookers are essential to Hawaiian cookery and Cajun cuisine.

Rice cookers can dramatically improve the quality, flavor, and texture of rice. Great rice-cooker rice is really, really delicious—aromatic, nutty, earthen, and with a broad depth of flavor—and quite easy to make. If you want the ease of one-step cooking with delicious results while you put together the rest of dinner, it may be time to buy one. Another bonus for many cooks: Rice-cooker cooking is unburnable. It’s much easier to clean a rice cooker insert than burnt-on rice in a cooking pot.

A good rice cooker should cook delicious, fluffy, flavorful Japanese-style rice (meaning short-grain or medium-grain white rice) evenly throughout the pot every time. The machine should be sturdy and built of quality materials to stand up over time. The lid should have a tight seal to maintain steam and temperature. It should also cook consistently: One cup of rice should taste as good as cooking rice to maximum capacity. Though rice cookers aren’t known for being faster than cooking rice in a pot, they shouldn’t be painfully slow, either. A good appliance should also have some convenient features, such as delayed start, keep warm, and quick-cook settings. And ideally, a good rice cooker should be easy to clean and easy to use.

Rice cookers come in a range of prices, and if you want to cook grains like millet, quinoa, brown rice, or more, be prepared to spend $150 or more for a model that can accomplish these tasks. A variety of issues haunt cheaper rice cookers. For more on the relationship between price and quality of rice cookers, see our full guide.

Any rice cooker insert worth its salt is going to be nonstick; most have nonstick aluminum inserts. Thinner pots tend to wear out more quickly and lose some protective coating.

We looked for cookers with solid, tightly sealed lids and heavy, quality cooking pots. We also selected models with a minimum five-cup cooking capacity; many users report that they make extra rice, and 5 to 10 cups seems like the right amount for two to four people with leftovers. We also chose to look only at models that have a brown-rice option and—to help save time for busy cooks—a quick-cook setting for speed and convenience.

For our original 2013 review, we first tested the cookers informally with some home cooks. Then we conducted a formal group taste test with the chefs from Japanese restaurant Ken Ken Ramen in San Francisco.

For this update we didn’t perform a panel testing, but in each of the 10 cookers we made a batch of Japanese white rice—likely the most critical and the most-used skill for a rice cooker. If they performed well for rice flavor, texture, and cooking speed in this test, they moved on to three other tests (see below). For the Japanese rice tests, we washed the rice of its exterior starch for one full minute and then drained for one full minute before cooking (we didn’t wash the brown or long-grain white rice). See our full guide for details of our tests.

The Hamilton Beach 37549 2-to-14-cup Digital Simplicity Rice Cooker and Steamer is the best value for most people because it offers tremendous functionality for the price. Above all, it makes short-grain or medium-grain white rice as delicious as that of models that cost four times as much. The construction feels solid, and it cooks more quickly when compared with most of the competition (it was the second fastest cooker we tested). With a 14-cup capacity, the Hamilton Beach is much larger than many other machines at this price. Additionally, it’s a pleasure to house on almost any kitchen countertop: its sleek stainless and black design makes it look like a more expensive model, and it’s more well-contained in a small footprint than most. It delivers on features that we thought a great rice cooker should have: a timer, stay-warm functions, a tight lid, and a heavy, quality cooking pot. For the majority of home cooks seeking a useful, manageable tool to make delicious white rice at a great price, it will be tough to beat this Hamilton Beach machine.

Many rice cookers under $50 leave a lot to be desired. Rare is the well-priced cooker with an insulated lid to hold in steam and keep food warm for hours, but the Hamilton Beach does both with alacrity. Low-priced cookers are often single-switch on-off affairs, whereas the Hamilton Beach has multiple advanced functions, such as settings for brown rice and quick-cooked rice. Few at this price have its delayed-start-time capability or its ability to slow cook or steam cook vegetables, meat, beans, soups, and stews. 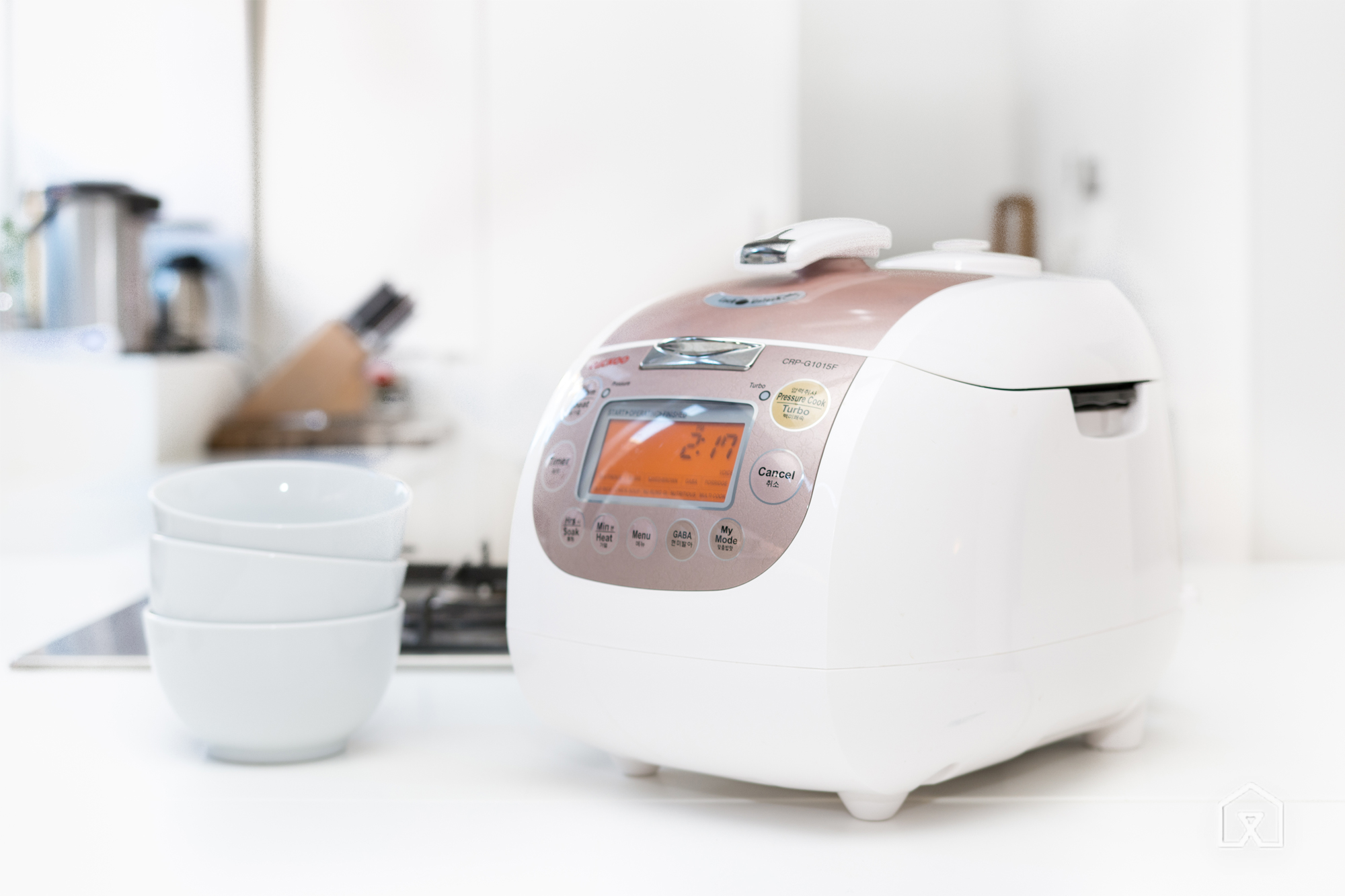 For those seeking a great machine beyond the basics, we highly recommend the Cuckoo CRP-G1015F 10-cup Electric Pressure Rice Cooker. Although it’s fairly expensive, in our testing we found this made some of the most delicious rice we’ve ever made at home: flavorful, aromatic, and with a texture that preserves the integrity of every grain. What really sets this cooker apart is how fast it cooks a variety of rices. Short-grain or medium-grain white rice cooked wickedly fast—just 29 minutes, which is faster than the quick-cook setting on any of the other machines that we tested. Brown rice cooks almost twice as fast as in the Zojirushi (our former pick for frequent cooking), and almost a half-hour faster than the Tiger. 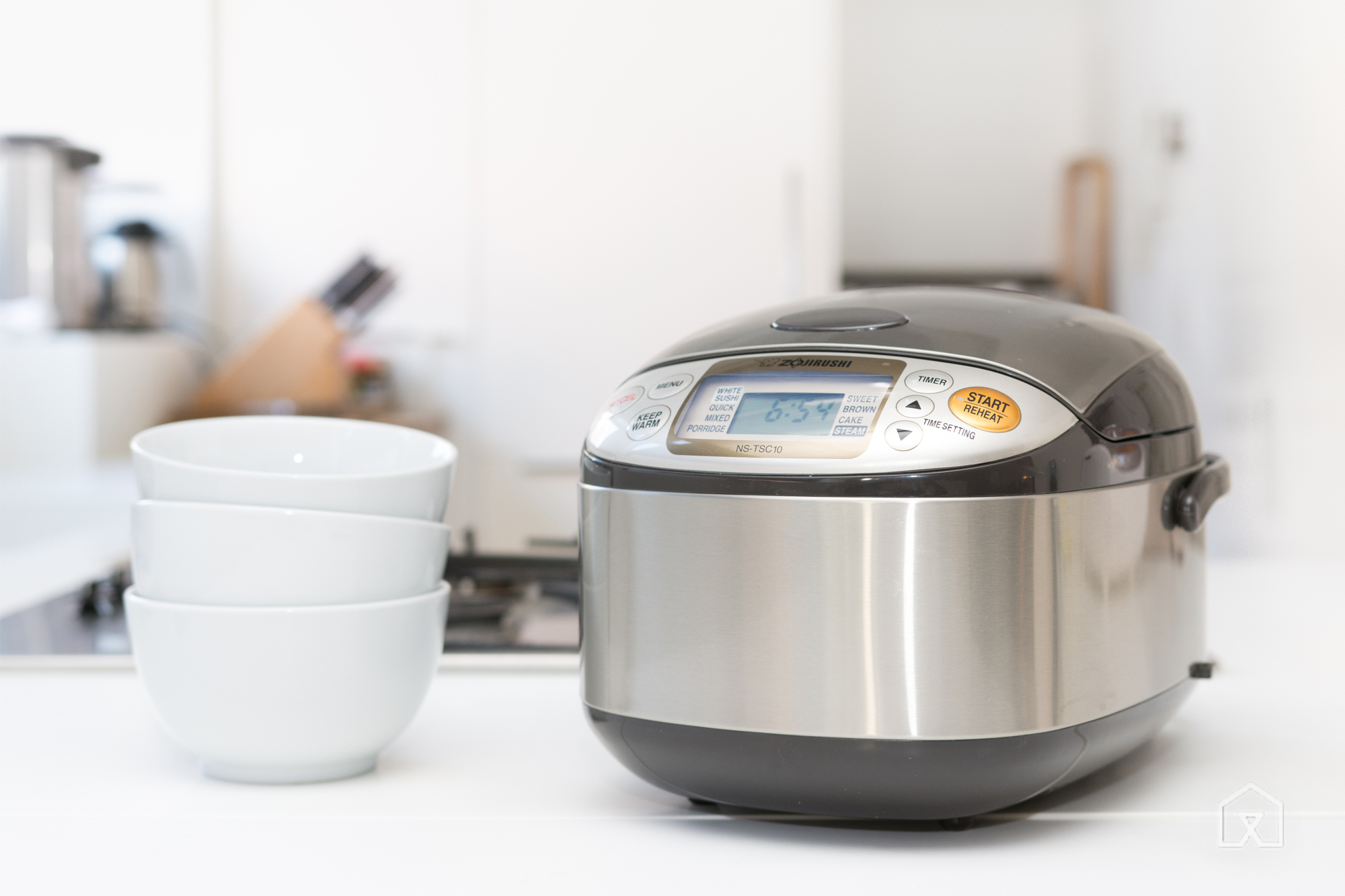 If the Cuckoo is too expensive for you but you’d like a sturdier and more versatile cooker than the Hamilton Beach, the Zojirushi NS-TSC10, our upgrade pick from the 2013 review, is still a great buy.

The rice it makes is delicious, and the machine is easy to use and easy to clean. The big downside is speed: It was the slowest of the lot when it came to cooking white rice, clocking in at 46 minutes for a 3-cup batch, compared with 34 minutes for the Hamilton Beach and 29 minutes for the Cuckoo. And it was the slowest for brown rice by a landslide, taking an hour and 52 minutes, almost twice as long as the Hamilton Beach and the Cuckoo.

Read more from News
← A DIYer’s guide to changing a car’s spark plugs
After Math: Keeping it 100 →