I smelled and hugged a tree in VR, because art

At the Tribeca VR arcade this year, there were displays ranging from the harrowing to the distracting, but few were as eye-catching as Treehugger:Wawona. It’s an interactive art installation that had headset-wearing participants hugging and caressing a giant foam sculpture with cutouts (oblivious to how silly they looked). Naturally, I had to check it out, and came away intrigued by its implications for art and museums.

As with other works of art, Treehugger’s meaning lies beneath its surface, requiring a prodding mind to uncover. At its heart, the installation asks if we can use technology to reconnect with nature. “Can we make the invisible visible,” the project’s creative director Ersin Han told Engadget. Some messages are immediately obvious, though, such as the need to preserve our environment and the interconnection between plants and humanity. As you approach the tree, enter it and witness its life force swirling around you and spreading through its branches to the rest of the forest, you (hopefully) realize that those colored specks eventually reach you, too.

But before we get into that, here’s how it’s set up: I was directed to a tree stump-esque seat, where I strapped on a SubPac vibrating backpack, an HTC Vive and a pair of noise cancelling headphones. I was also given two handheld controllers that were mounted on fingerless gloves, so I didn’t actually have to hold on to anything. Once I had run through the simulation’s setup and calibration, I saw a large tree in front of me and walked towards it. As I very carefully made my way to the foam sculpture, I realized that a stream of lightly scented air was wafting up my nose. The woody fragrance was pleasant, but at times I felt like I might choke on the air blowing up my nostril. 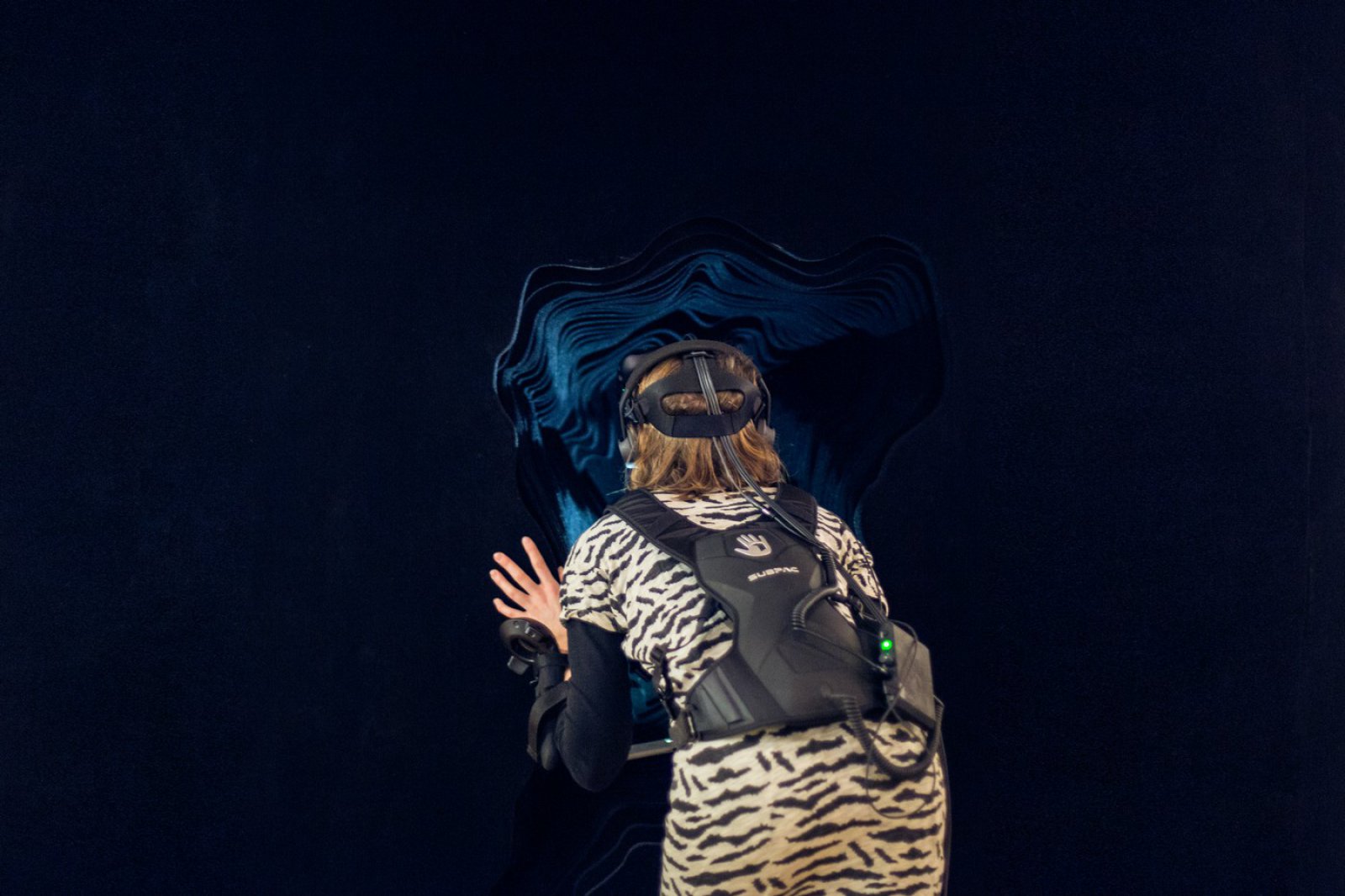 Upon arriving at the tree’s base, I stuck my head inside the trunk’s hollow, and watched as swirling blue and orange lights circulated around the tree. After a few seconds, the environment started moving, and I was led on a journey up to the treetop. Throughout the virtual ride, I reached out and swept aside the light particles, looking around wildly as I grabbed onto the real-world sculpture for dear life. But there was nothing to worry about; the entire simulation is drawn-out and somewhat anti-climactic since there really isn’t a goal or objective.

To be clear, the graphics here are not photo-realistic. You’ll be looking at a render of the tree, and the swirling lights look a lot like data-visualization animations, except they flow in an artistic, not algorithmic way. Still, the uniquely named team Marshmallow Laser Feast’s most impressive feat here is putting together such a (pseudo) realistic and immersive scale model of the giant sequoia. The team used architectural scans of the tree to reproduce both the virtual plant and the real-world sculpture. It also recorded the plant’s biosignals to turn into the sounds I heard within the experience, resulting in a calming and somewhat otherworldly soundtrack. 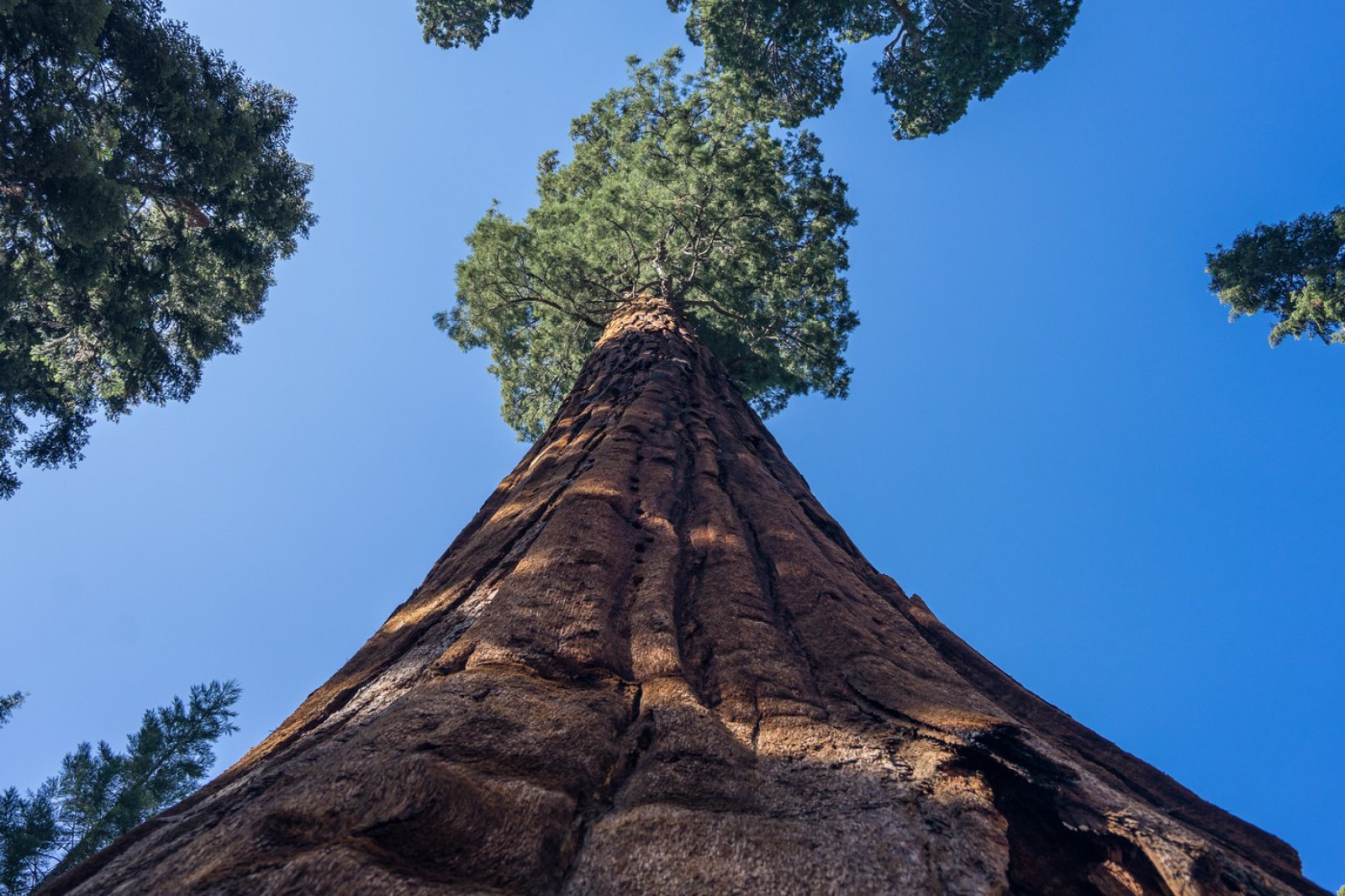 Treehugger’s important messages unfortunately get lost in the simulation’s many moving pieces. I was too caught up in wondering what came next and too distracted by the air shooting up my nose to ponder the team’s agenda. Plus, given the chaotic environment at the arcade, it was difficult to fully appreciate what I was experiencing. In a different place, like a museum, for example, Treehugger stands a better chance of impressing its viewer.

The good news is, after Tribeca, the installation will be heading to other festivals and galleries around the world. Marshmallow Laser Feast (I still can’t get over that name) is also planning on making more episodes based on other regions, including Kyoto’s Bamboo forest and the Amazonian rainforest. Regardless of the success of subsequent chapters, Treehugger is already a telling look at art and museums of the future, and a mostly fruitful marriage of tech and nature.

Follow along with all of our Tribeca 2017 coverage here.

Read more from News
← The Avengers take on gaming icons in ‘Marvel vs. Capcom: Infinite’
MTV’s ‘Catfish’ will introduce internet trolls to their victims →