For those who take their gaming seriously, a quality headset can make all the difference when it comes to immersion and competitiveness. Along with allowing you to fully enjoy music and sound effects, a good headset enables you to communicate more effectively with your teammates during those down-to-the-wire multiplayer matches. The highly-rated Razer Kraken 7.1 gaming headset, currently on sale for $54, is one such model that would make a welcome addition to any hardcore gamer’s battle station. 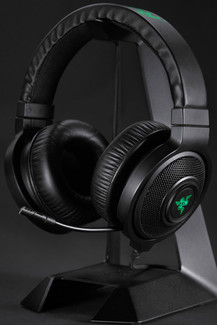 As a very popular and well-known manufacturer of gaming peripherals, Razer needs no introduction. The firm’s keyboards, mice, and headsets remain staples in the gaming community and the Razer Kraken 7.1 gaming headset is a standout member of this stable. The Kraken utilizes two 40mm drivers which utilize virtual surround-sound technology for detailed multi-direction audio and increased situational awareness when you’re immersed in your game. The attached digital microphone offers crisp voice input and retracts into the headset so it’s out of your way when not in use.

More: Create your perfect workspace with Sabrent’s universal dock, now only $90 on Amazon

The last thing you want to worry about during a long gaming session is sore ears, and the Kraken’s padded headband and cushioned earcups keep you comfortable for periods of extended use. Razer’s own Synapse software allows the user to create custom pre-sets for specific games and for other audio applications, and the Chroma model features color-changing LED logos on the earcups for a customizable look.

The Razer Kraken 7.1 gaming headset has earned a solid 4-star rating from over 1,000 customer reviews and retails for $100. For a limited time, Amazon is offering it for just $54 — a generous 46-percent discount off of the original price. If you’ve been hunting around for a quality gaming headset or have had your eye on one of Razer’s offerings, then now is a great time to grab one while the getting’s good.

Read more from News
← In a battle of machine against man, the machine won … in Texas Hold’em poker
Lego Life is a social network that encourages kids to share their creations →