In fact, just as movies in the 1950s introduced gimmick after gimmick to compete with the new threat of TV, so the adult industry today is desperately trying to come up with ways of selling you things that you can’t readily get through a quick free visit to your local streaming website.

One solution? 360-degree virtual reality. Another? Live models for users to interact with. The latest? Smell-o-vision. That’s right: the infamous odor-releasing movie accessory that debuted with 1960’s Scent of Mystery is making a comeback. And we can’t even work out whether that’s a pun.

More: Oculus wants to help you set up the perfect virtual reality room

The company behind this is a “live cams” business called CamSoda.

One of the most surprising elements of OhRoma is that the scents offered aren’t… what you would expect.

“The closer you can bring the relationship between model and user, the more successful the model is, and the better the overall experience,” CamSoda president Daron Lundeen told Digital Trends. “In our labs we’re constantly on the lookout for ways to connect the two. Scent is something that’s incredibly powerful. Car manufacturers spend millions of dollars to create the ‘new car’ smell that’s going to help sell their cars. We’re trying to do the same thing for models.”

What CamSoda’s engineers have created is a gas mask-style device with various interchangeable canisters, a heating element, and Bluetooth connectivity. You then load it up with one of 30 different fragrances, pop on your regular VR goggles, and get on with… whatever you’re getting on with.

Get your nose out of the gutter

One of the most surprising elements of OhRoma is that the scents offered aren’t… what you would expect. At least not entirely. We won’t elaborate here, but presumably your mind went to the same place that ours’ did when you first heard about smell-o-vision pornography. Wrong! Well, sort of. While there are certainly scents for ““private parts,” “body odor,” and more, there are also broader categories like “aphrodisiacs,” and “environments.”

“What we’ve found is that a lot of the models wanted to go toward things like food smells and other things which create an atmosphere,” Lundeen said. “One model does a baking show. Another does a gaming show, where the scent you get is of beer and potato chips.” 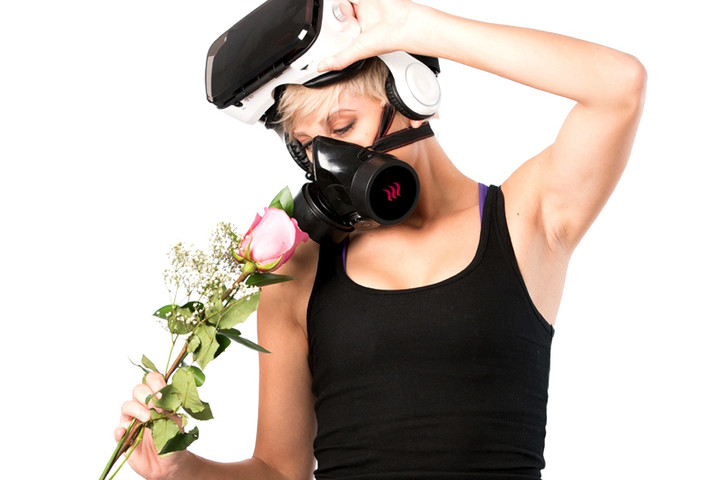 Sure, beer and potato chip smells probably aren’t what Roland Barthes, the French literary critic, had in mind when he wrote his famous essay on the “Semiotics Of Striptease.” However, much as Barthes’ exotic dancer is most eroticized when concealing herself and, paradoxically, at her most “desexualized at the very moment when she is stripped naked,” so too do the olfactory parlor games of the OhRoma girls add an element that has nothing to do with sex… and everything to do with sex.

‘Smell profiles’ are now a thing

The technologically is intriguing, too. The models get to program the experience themselves, and then set off different “smells profiles” as they wish, like pyrotechnics or lighting cues in a rock show. The end user also gets to control the “volume” of the scents, and eliminate any they don’t like, which makes for an intriguingly interactive experience.

In the movie Boogie Nights, Burt Reynold’s Jack Horner was patterned after studio directors like Cecil B. DeMille and Charlie Chaplin. Today, a person like (the ironically anti-porn) Steve Jobs is more likely to be an inspiration.

Jobs had a vision for the Apple ecosystem, where iPhone sales would drive Mac sales, Mac sales would drive iTunes sales, iTunes sales would drive iPad sales, and so forth. Lundeen, too, sees a whole CamSoda hardware ecosystem lined up. Only instead of tablets and smartphones, what the company wants to sell are OhRoma gas masks and “teledildonics,” connected sex toys that vibrate for the user whenever a model touches their counterpart hundreds or thousands of miles away.

It’s a connected experience and, as comical as some of it undoubtedly sounds, it’s tough not to be impressed by the breadth of vision.

Right now, the OhRoma rig is available for $99, which includes the mask, as well as 30 different scents. Extra scents and top-ups then cost $5.99. Shipments are set to take place in the first part of this year.

More: Everything can taste sweet with the Taste Buddy gadget

So is this just a publicity stunt, or does Lundeen genuinely believe that this is where the adult industry needs to go?

“What we’ve found is that if we focus too much on what is going to make us or the models more money right now, and what can’t be pirated, you wind up not being innovative,” he said. “It’s far better to be creative and try new things, and see where it leads you.”

Just make sure you lock your door first. This one’s gonna be pretty tough to explain.