A few years from now, we might have the power to make more accurate space weather forecasts thanks to an ESA satellite. The European Space Agency plans to launch a solar-monitoring space weather probe in 2023 to keep an eye out for Coronal Mass Ejections (CME), and it’s hoping to send it to a stable orbit called the Lagrange point 5. That location will give the satellite a unique side-on view of the surface of the sun that’s bound to face Earth in four to five days.

CMEs are enormous and powerful eruptions of plasma and magnetic field from the sun’s corona, which can cause widescale blackouts. By getting a glimpse of possible CMEs, astronomers could raise a warning much earlier than we’re used to and help power grid companies prepare. It’s pretty hard to predict them, though, so astronomers still won’t be able to say when exactly one will erupt even with the probe in place.

Juha-Pekka Luntama, ESA space-weather team head, says “it’s a little like a tornado warning in the US — you can’t tell exactly when it’s going to happen or where, but you can give a warning that there’s an increased probability of dangerous conditions.” The data it will generate combined with the data generated by satellites in Lagrange 1, which have a frontal view of the sun, will help scientists better understand solar flares, CMEs and other solar phenomena.

While the ESA still hasn’t decided on Lagrange 5 as the probe’s destination, the ESA is eyeing it more than Lagrange 1 that already plays host to numerous satellites. Hermann Opgenoorth, a space-plasma physicist at the Swedish Institute of Space Physics in Uppsala says “an L5 mission would give something the others don’t have” and that he and his fellow scientists are “excited that it’s finally going ahead.” 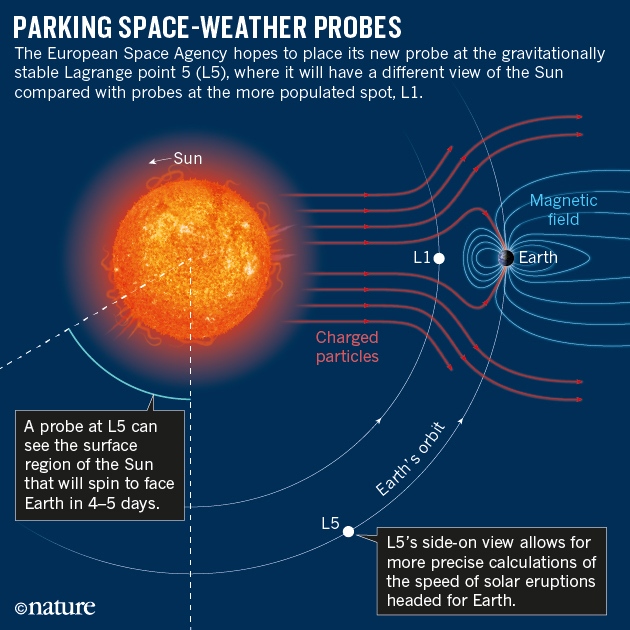