The Good The Antennas Direct ClearStream Eclipse is one of the most complete indoor kits you can get with plenty of convenience features, like adhesive and a replaceable cable, included in the box. It was able to pull in more channels than any other of the models on test.

The Bad In our test locations it didn’t fare much better than the $10 antenna in regards to signal strength. The Amplified (+$20) version may cause you to lose channels.

The Bottom Line The Antennas Direct ClearStream Eclipse offers everything you could want in an indoor antenna, but be sure to shop around on price.

Putting the “bunny ears” aside, the Antennas Direct ClearStream Eclipse is the most distinctive-looking antenna in our indoor antenna lineup. But it’s not just about head-turning looks: the Antennas Direct packs a lot of features and performance into this relatively small antenna.

The ClearStream Eclipse is half of a flattened Moebius strip with the option of a black or white side. As far as convenience features, it’s the best of all of the models we looked at. There’s not only the option to add a longer cable (with a coaxial port at the bottom of the antenna) but it also includes a cable in the box, unlike the similarly priced Channel Master Smartenna.

This antenna is designed to be stuck on a window and it includes a number of sticky pads in the box to help you do this. No need to buy poster putty! 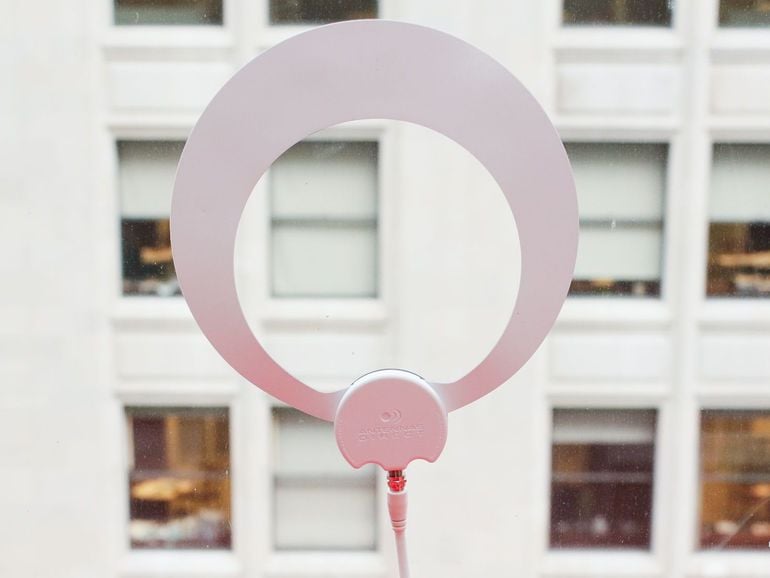 When affixed to our window it performed near the top of the pack. Its greatest strength: its ability to pull in far-flung channels that the other antennas couldn’t find. It found the highest number of channels of any model in our inner-city test — 75, or five more than the Flatenna.

With signal strength it did reasonably well with five usable channels out of 11, which is the same as our budget pick, the Channel Master Flatenna.

While you could buy the amplified version for an extra $20, we found that using it didn’t actually help in our two test locations. In fact, it was much worse at bringing in channels and maintaining a watchable picture. It may help, however, if you live in a rural area, but experiment with the cheaper one first and add an amp later if you wish. As a result our recommendation is for the unamplified version, but try and buy it from Antennas Direct, as it’s currently $20 off at $40.

See how the Antennas Direct fared in our cord-cutters guide to indoor antennas here.

Read more from Reviews
Reviews
← Pokemon Go made it easier to catch those new Pokemon for the holidays
Evie Launcher 2.0 brings the best of Apple, Android and Nova →