Algoriddim squeezes its djay Pro app into the iPhone

For the past 10 years, DJ software maker Algoriddim has been steadily updating its djay app, adding fresh features as software and technology have improved. It started out in Apple’s eco-system on the Mac, adding the iPhone and iPad as it went, even letting Android join the party eventually. Last year its fully-outfitted Pro version added video mixing alongside sampling, effects and four decks. This comprehensive party software hit iPads last year, but starting today the backbreaking work of hauling laptops and tablets around is over, with the newly laid out djay Pro for iPhone. Yep, you new get a fully capable DJ package, with access to Spotify’s pool of tracks, four decks, effects and video mixing in a pocketable format. If you’re intrigued, now’s the time to try it, with a limited time launch price of $4.99.

This revamped version of djay Pro isn’t much different from before. Most of the changes are subtle, aimed at improving accessibility on a small screen. There are some new features that take advantage of 3D-Touch and haptic feedback capabilities, though. You can now feel left, right and center spots on the crossfader as little nudges, plus cue marks can be created on the fly by hard presses on the screen. Also impressive, is the ability to feel each kick as you’re scrubbing through waveforms, which helps bring a semblance of actual record queuing back into the process.

In my opinion, DJing with just an iPhone isn’t necessarily the most pleasant experience. I suppose tiny fingers could help — perhaps it’s purpose-built for the emerging generation — but, with the combination of 3D-Touch and haptic feedback, it’s definitely workable. Djay Pro for iPhone makes the best of available space, offering easy access to effects, filters and tracks with centrally placed buttons. 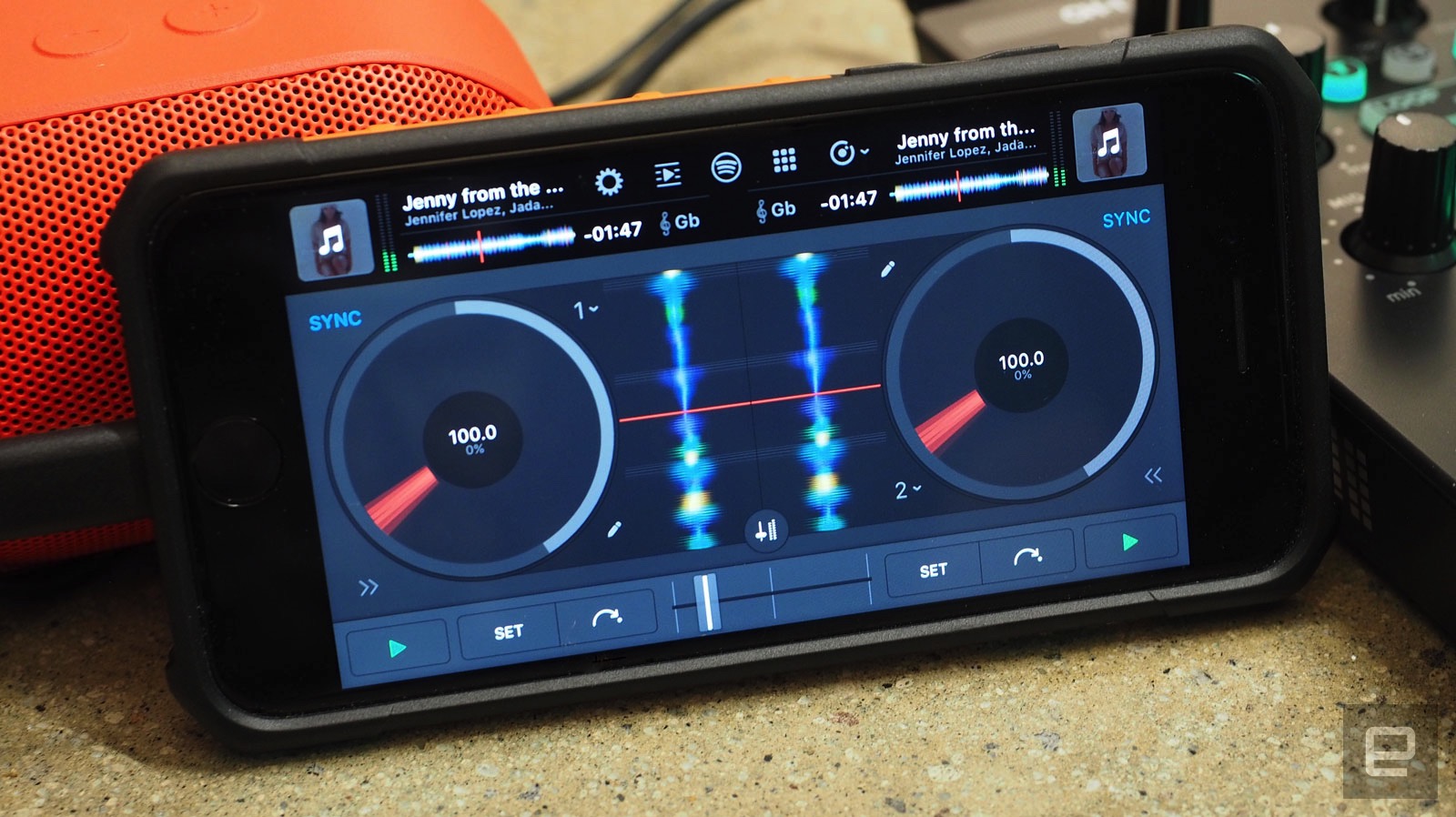 Spotify integration is onboard as expected, but the browse function is a new addition, helping you search out new selections by mood, genre or popularity. It’s a great way to have access to a pool of tracks without building up your own collection, plus it’s a lifesaver if you find yourself in need of songs that fit a vibe you absolutely didn’t prepare for in advance.

For those adventurous enough, the video mixing capability is great, and it’s surprising to have access to such rich features from a device that fits in your pocket. You can use AirPlay to stream both music and video to to compatible systems, making it a pleasantly wireless experience. On top of this, if you have an Apple Watch, the watchOS 3 updates offer mix control from your wrist with improved ultra-low latency. While small fingers may help, the watch interface is intuitive and easy to use.

What could be the perfect on-the-go combo, is to pair the mobile app with Algoriddim’s latest hardware collaboration called Mixtour. This ultra-portable DJ controller manufactured by Reloop is definitely bag friendly and lets you run most of the app’s standard features from its larger interface. It takes a bit more forethought to carry one of these around on the off chance you’ll be playing some tunes, but it could help you avoid hunching over your phone when you’re in the mix.

If you’re not using one of Apple’s latest handsets, don’t worry, you can still use djay Pro for iPhone if you have an iPhone 5 or later running iOS 10, but you’ll have to do without the haptic and 3D-Touch perks. You can pick up a copy of the app on iTunes starting today and save 50 percent off the regular price for a limited time.