Honda has delivered the first hydrogen-powered Clarity fuel cell vehicles (FCVs) to dealers in Torrance, California, home of the automaker’s US campus. Approved buyers can take one home on a lease for $2,868 down and $369 a month for three years, a price that includes 20,000 miles per year and up to $15,0000 of hydrogen fuel.

The advantage of a Clarity over regular EVs? You can fuel up to the top in about 10 minutes and travel 366 miles before you need to do it again. By contrast, you can only go about 315 miles in the Tesla Model S P100D, and it takes 40 minutes to get to an 80 percent charge, at best (using a supercharger). The Clarity’s 174 HP engine can propel you to a top speed of 100 mph, but lack of emissions is the point of an FCV, not performance.

If you get out a calculator, you may notice that the total purchase cost ($16,152) is not a lot higher than the amount of free fuel. Honda isn’t selling the Clarity to make a profit; instead, the automaker wants to test its practicality in the real world on a larger scale than it did with the original Clarity FCX. 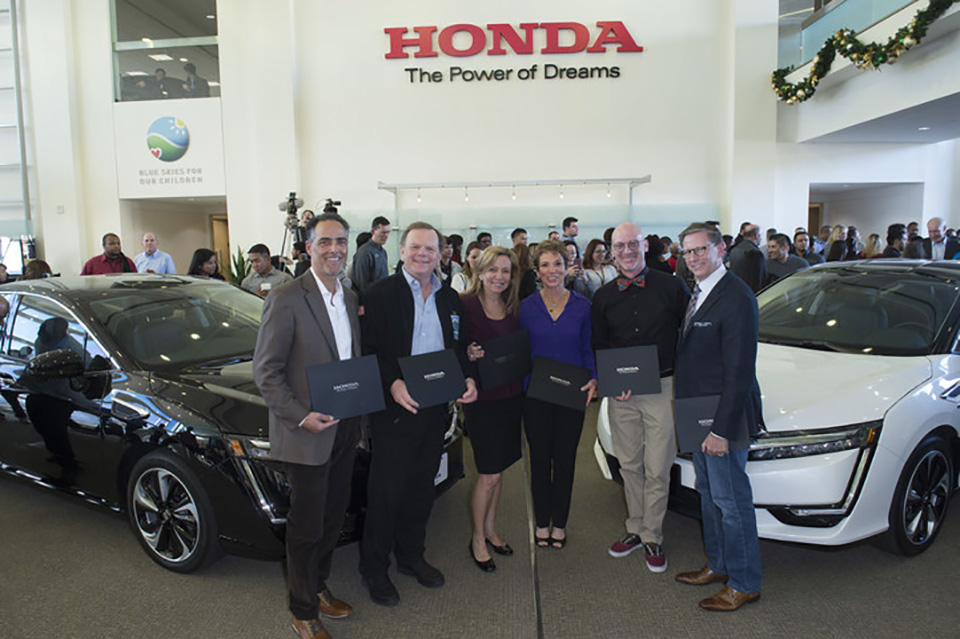 For now, availability is limited to California, the only US state with an extensive hydrogen filling station network. As it stands, there are around 25 retail and 5 non-retail stations (not selling unrestricted H2 to consumers) on California’s “Hydrogen Highway” from Lake Tahoe to San Diego. That includes a non-retail station in Torrance that should be upgraded to full retail by next year. On top of that, there are around 20 retail stations currently under development.

As I noted in Engadget’s hydrogen vehicle explainer, it costs up to several million dollars to set up a hydrogen fueling station, compared to around $300,000 to install a Tesla supercharger. Most hydrogen comes from reformed methane, which is plentiful in the US thanks to fracking. In theory, from ground to wheels, methane-based hydrogen should be less polluting than gasoline. However, thanks to infrastructure leaks and other issues, it may actually be more harmful, because methane is a much worse greenhouse gas than CO2.

Honda and Toyota, spurred by the Japanese government, went all-in on hydrogen in Japan and the US. However, Toyota is now hedging its bets, saying that it’s now building a lithium-battery powered EV.