Google Contributor is being unceremoniously shut down 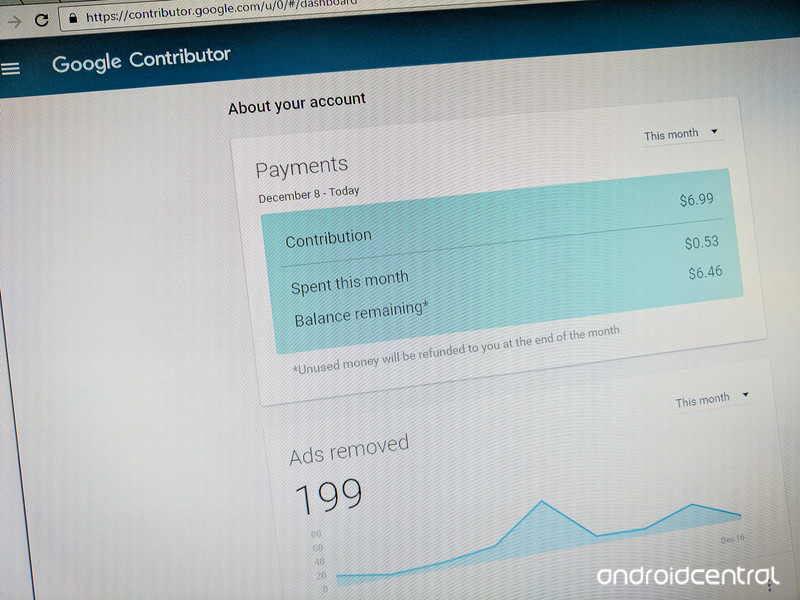 Thank you for being a part of Google Contributor, a service that helps readers enjoy fewer ads while funding the sites they love.

Early next year we are launching a new and improved Contributor — your input throughout testing has been invaluable! As we build this new service, we will discontinue the current version of Contributor.

What this means for you

Starting in mid-January 2017, you will no longer see Contributor ad replacements as you browse the web and you will be unable to access your Contributor account.

About payments and billing

You will no longer be billed for the Contributor service starting mid-January 2017, and we will refund your remaining account balance to your credit or debit card on file.

Since launching in late 2014, Google Contributor has gone through a few different iterations of how it removes ads and charges users. The most recent (and user-friendly) model was to simply charge a flat rate of $6.99 per month and calculate the cost of the ads you removed, refunding you any money that wasn’t put toward ads. It meant you never overpaid, and also didn’t really feel the effect of being charged for every single ad that was removed.

Contributor needed improving, but shutting it down altogether is odd.

While Google says that a new and improved version of Contributor will be launching next year, it’s odd to see that its process for doing so involves completely shutting down the current version of Contributor and locking everyone’s account. Considering how it’s being handled, we could be in store for a pretty dramatic change to Contributor (including the name, perhaps).

Contributor was certainly an interesting idea and one that aimed to counteract the high usage of ad blockers on the web, but I find it hard to believe that there was any substantial number of users actively paying Contributor to remove ads. For as good of an idea as it is in its current form, Contributor needs a restructuring if it’s going to catch on at the scale of any other Google service.

Read more from News
News
← This virtual assistant looks like an anime girl trapped in a coffee pot
Star Trek Combadge: Is This The One To Beam Up? →