The idea of a “gaming laptop” usually brings to mind one of two images: an oversize laptop with enough power to rival a desktop machine, or a shockingly thin (and expensive) notebook that punches above its weight. Somewhere in between you’ll find 15-inch systems like the ASUS ROG Strix GL502VS, a gaming laptop small and light enough to lug around, yet thick enough to house the sort of powerful internals you’d need to play just about any game you want. Though it’s not a premium machine by any means, the Strix strikes a nice balance between power and portability. 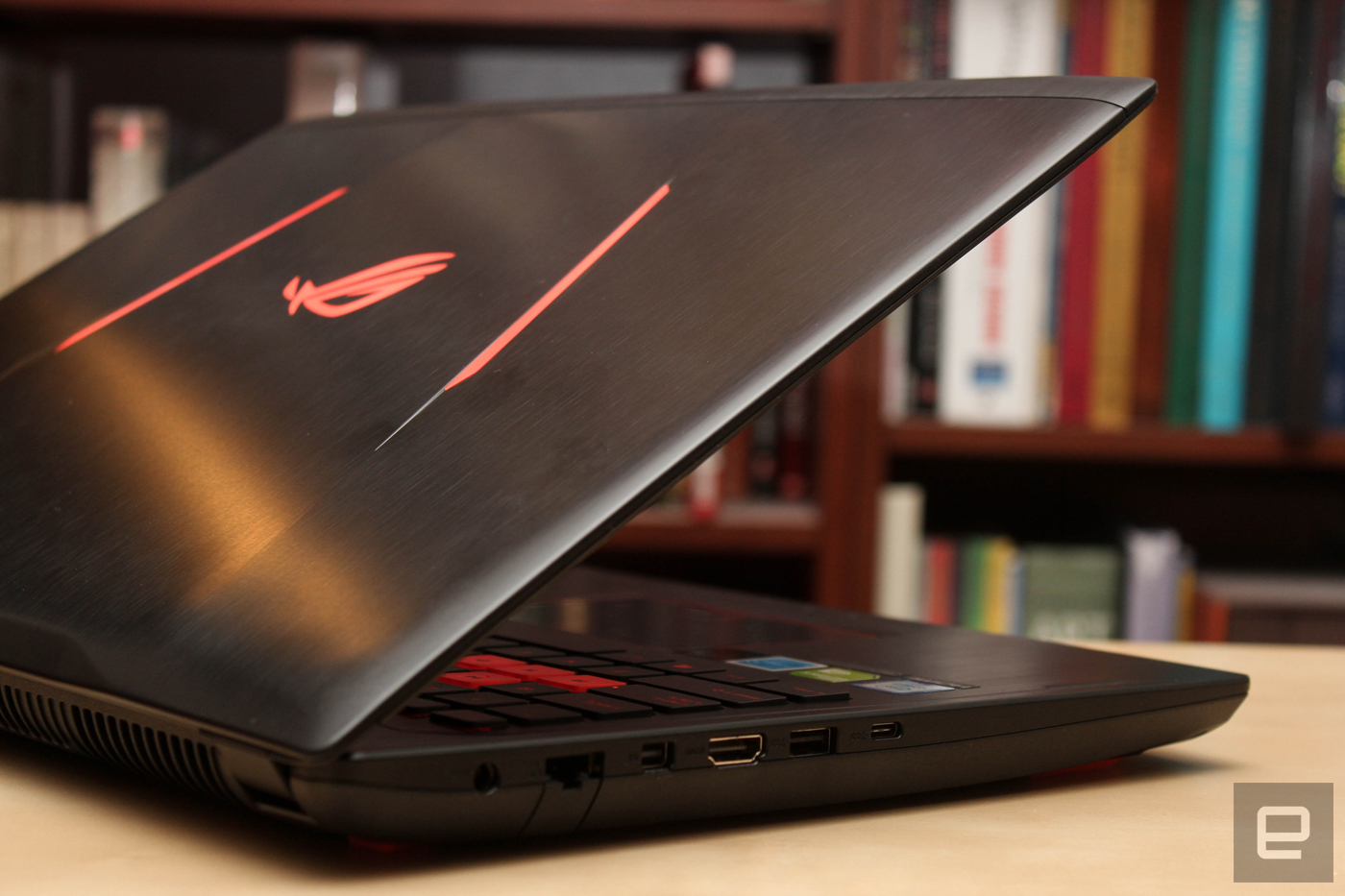 Spotting a gaming laptop in a crowded coffee shop is easy — just look for the loudest, most garish machine in the room. Indeed, ASUS’ Strix wouldn’t take long to find: The laptop’s otherwise subdued chassis is adorned with glowing neon orange highlights. Colorful touches against a dark frame are a common design trope in gaming notebooks, but the Strix’s obnoxiously bright shade of orange is the ultimate “look at me” color, with accents everywhere from the speaker grilles, logos, WASD keycaps, and keyboard lettering to the touchpad. It’s also the machine’s only visual flair; apart from the dim red hue of the Strix’s air vent, the rest of the chassis is a study in black plastic and straight lines.

The Strix lacks the premium feel of an aluminum milled machine, but the trade-off is worth it: The plastic chassis makes this relatively light for a midsize gaming laptop, weighing in at just over five pounds. It doesn’t feel cheap for the sake of the material either — a brushed plastic palm rest mimics the look and feel of the single aluminum plate adorning the lid. It’s a handsome machine, and a fairly portable one too. All told, its 1.18-inch-thick frame is just thin enough to comfortably fit my backpack’s laptop sleeve. 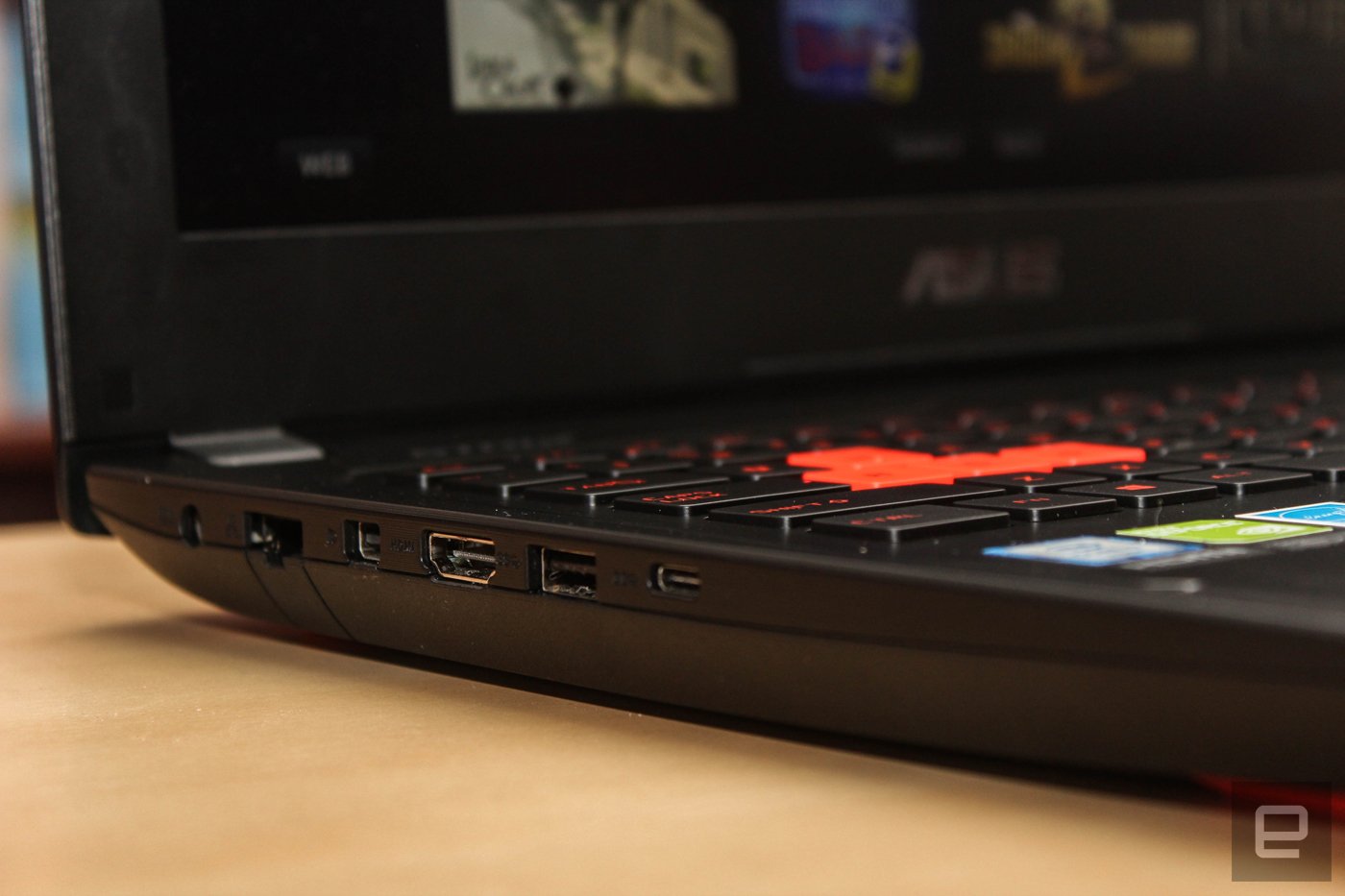 Those thick edges leave plenty of room for connectivity too, including three USB 3.0 ports, a headphone jack, an SD card reader, Ethernet and outputs for HDMI and Mini DisplayPort. Worried the next generation of peripherals will leave you in the dust? Don’t. The Strix also has a single USB Type-C connector. Not bad. 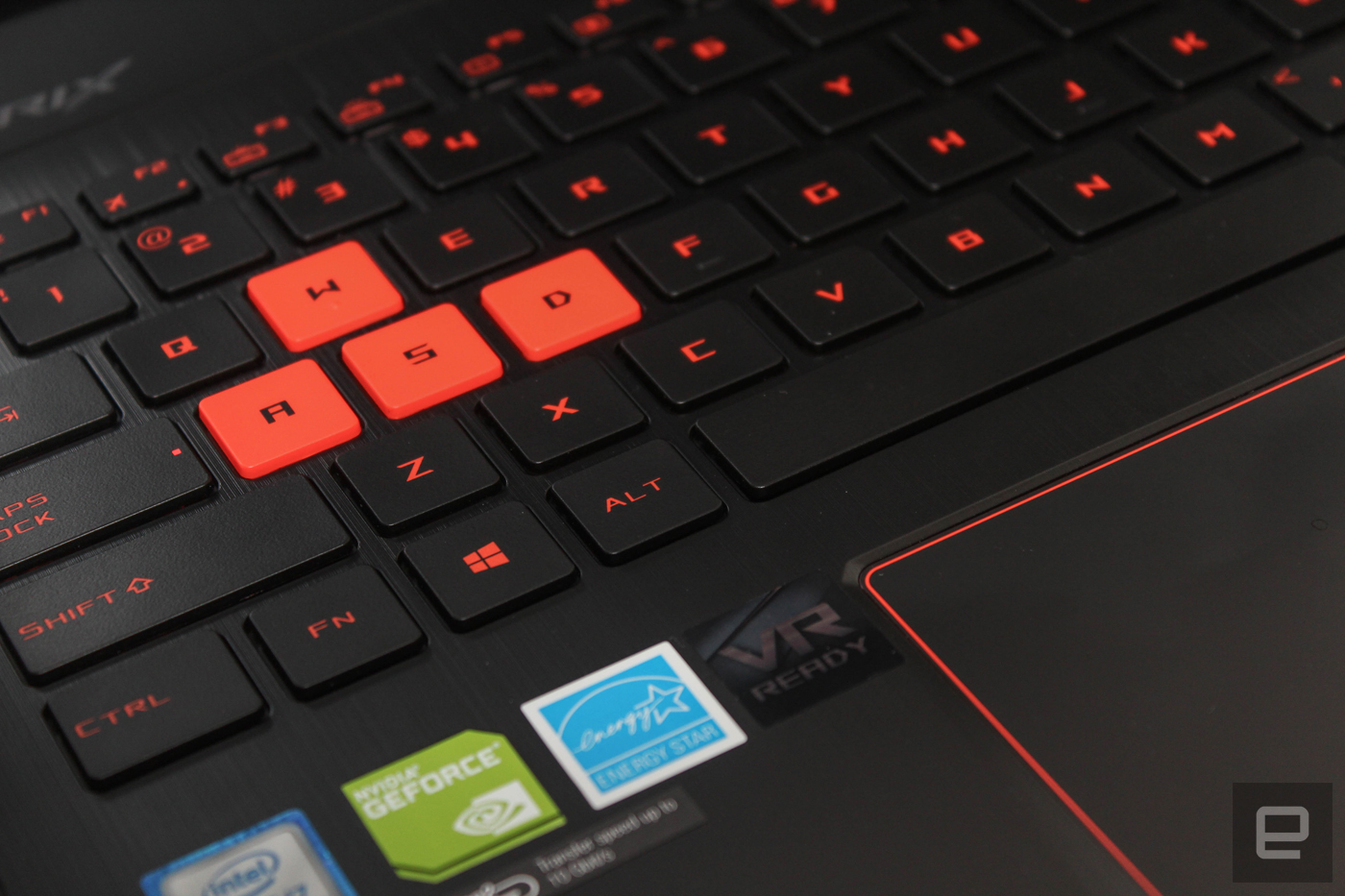 You could use the Strix’s keyboard to write home, but you wouldn’t. It’s nothing special. That isn’t to say there’s anything wrong with it; the Strix’s well-spaced keys offer 1.6mm of travel and land with a firm but not hard stop. It’s a perfectly serviceable keyboard with little to add to the experience apart from a dark red backlight. In fact, the only thing that sets it apart from any other is an ASUS standard: The company has replaced the ten-key pad’s Num Lock toggle with a dedicated button for calling up its ROG Gaming Center software (more on that later).

It’s mostly a harmless change, but vigorous typists may accidentally find themselves launching ASUS’ gaming suite when they mean to strike the backspace key. Well, I did anyway. The keyboard at least has standard “gaming keyboard” features, including a set of colored WASD keycaps (draped in the same obnoxious orange as the rest of the laptop’s highlights) and anti-ghosting support for up to 30 simultaneous key presses.

The trackpad, on the other hand, can be a bit flighty. The large, smooth mousing surface works fine for basic cursor manipulation, but I found it unreliable when it came to multi-touch gestures. On more than one occasion, the surface misread two-finger scrolling as a zoom pinch. At least once, too, it misinterpreted my attempt to pinch the zoom back to normal as a scroll. Most of the time, it reads either gesture just fine, but these are the kind of issues that have long given Windows touchpads a bad reputation. Combined with the pad’s stiff buttons, this trackpad feels like a step backward. 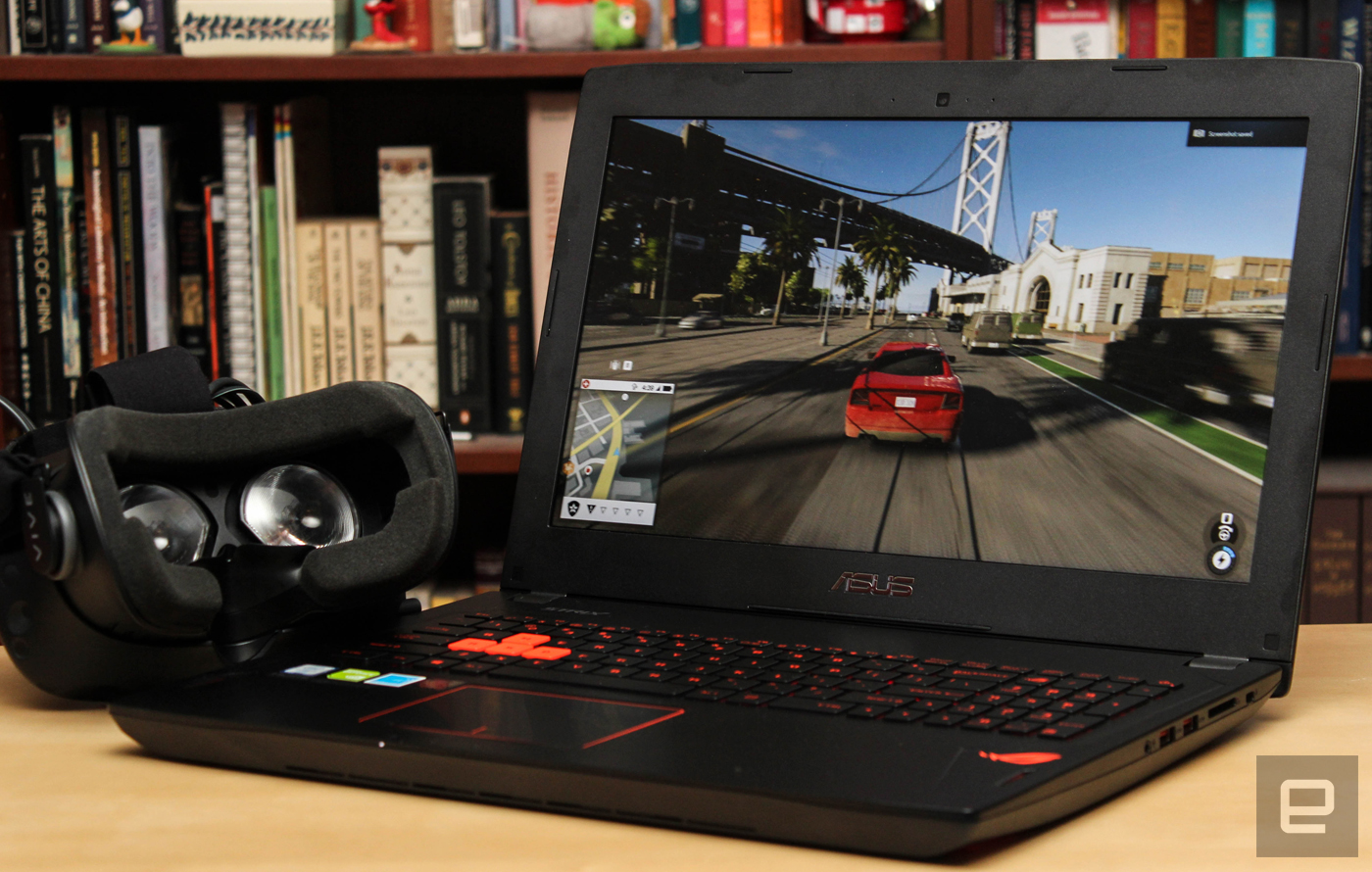 The display here has everything you could ask for from a gaming laptop: a non-reflective screen with wide viewing angles, deep contrast and bright, beautiful colors. In fact, ASUS says the Strix’s panel covers 98 percent of Adobe’s RGB color space and 100 percent of the sRGB standard. That’s great for gamers, but even better for folks using the machine to do video editing or Photoshop work.

Laptop audio is almost never remarkable, but the Strix’s speakers are somewhat notable. Instead of flanking the keyboard, like on most laptops, the Strix’s speakers live on either side of the touchpad. It’s sort of clever: The speakers’ already clear sound pops just a little more by dint of being closer to the user. It’s nice. Beyond that trick, however, the audio seems to be on par with that of other gaming laptops: clear, but not particularly deep. As always, a good equalizer goes a long way; turning off the ROG Gaming Center’s audio enhancements leaves the machine sounding a bit dull.

The Strix also comes equipped with a trio of microphones designed to filter out ambient sounds, but the array failed in my recording tests to remove noise from a fan on the other end of my house or even the sound of passing traffic. There may be three laptop microphones in this gaming rig, but at the end of the day they’re still just laptop microphones.

So how do you make up for a gaming laptop’s gaudy orange highlights and the disappointment of a mediocre touchpad? By overshadowing them with high-end internals and excellent gaming performance. With a 2.6GHz Intel i7-6700HQ CPU (3.5GHz with Turbo boost), 16GB of RAM and 1TB of storage on top of a 256GB SSD boot drive, the Strix handled my workload with aplomb. Still, we don’t buy gaming laptops to manage cloud documents, chat applications, music players and Photoshop; we buy them to play games. So how’d ASUS’ kit do? Just fine, thank you.

The Strix’s NVIDIA GeForce 1070 GPU didn’t completely shrug off my PC game library, but it certainly kept pace with it. Games like TitanFall 2, Just Cause 3, Hitman and Battlefield 1 all maintained solid frame rates of 60 to 90 fps on their highest graphic settings, though Battlefield 1 could occasionally drop into the high 40s on busier multiplayer maps. More demanding titles like The Witcher 3 and Watch Dogs 2 dipped just below the 60-fps threshold on “Ultra” settings, but could be coaxed above it with a few tweaks. All told, there wasn’t a single game in my library the Strix couldn’t comfortably play at its highest settings. Well, at least not until you put those games in virtual reality. 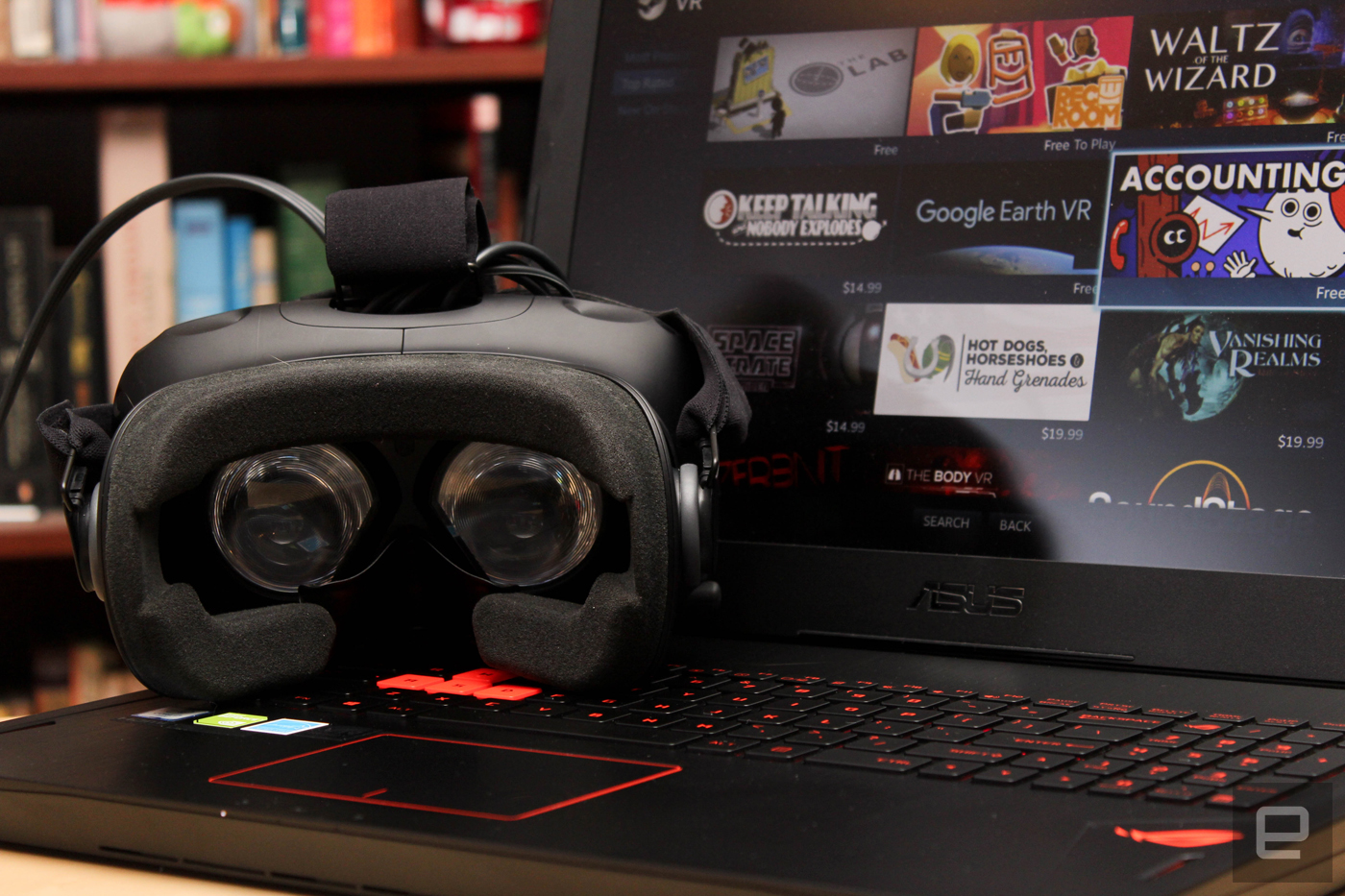 That’s right, we’re living in a new era of gaming laptops — an age when any machine worth its salt will bear a “VR Ready” sticker. The Strix is the first of this breed to land on Engadget’s review desk. With a score of 6,135 in VRMark’s “Orange Room” benchmark (and 1,640 in the more intensive “Blue Room” experience), the GL502VS is indeed a VR-capable gaming PC. It can run pretty much everything available in today’s consumer virtual reality market. It can’t, however, play all those VR games at their highest fidelity.

The laptop can run most virtual reality titles at their default settings, but configuring games like Raw Data and Serious Sam VR on Ultra can give the Strix serious pause. Pushing these games to the max turned their virtual landscapes into laggy, stuttering realities, resulting in the kind of head-tracking delays and low frame rates that can lead to nausea and VR headaches.

Fortunately, you’d really have to go out of your way to get a bad experience: Few VR games offer configurable graphics for this very reason, and everything I ran on the Strix played beautifully on default settings. That’s more than good enough for the first generation of PC VR games, but you also shouldn’t consider the machine future-proof by any means. Still, it’s good enough for now. Keep your virtual worlds tuned for performance, and not visual fidelity, and you’ll be happy.

Gaming laptops rarely get good battery life, and the GL502VS is no exception. In Engadget’s standard battery test (where we loop an HD video at fixed brightness until exhaustion), the Strix barely lasted three hours. Sadly, that’s barely below par for the majority of larger gaming laptops, but still: It’s disappointing. When competitors like Alienware, Razer and HP can make high-performance rigs that last between six and eight hours, three is just underwhelming. ASUS can, and probably should, do better. 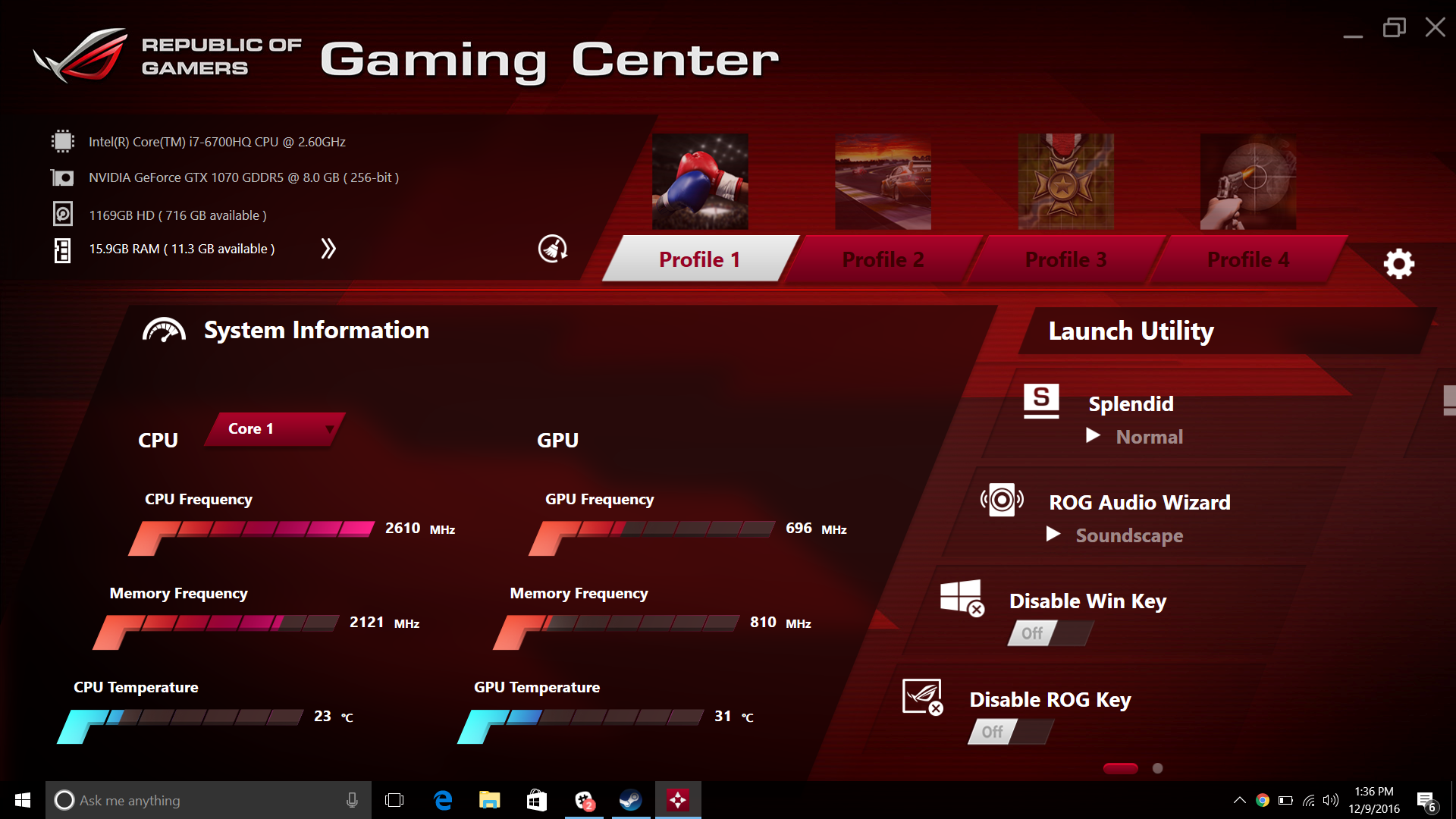 As the years go on, manufacturer pack-in software has become less and less necessary. Most laptop builders have done away with branded update tools, display managers and audio filters. ASUS hasn’t, but its software suites get slimmer year by year. In the past, ASUS’ ROG Gaming Center application served as a hub for half a dozen purpose-built programs for adjusting the audio equalizer, tweaking screen settings and configuring keyboard macros. Now all of that is simply integrated into the main application. Unfortunately, that app is unintuitive and messy and doesn’t even do much.

The ROG Gaming Center will let you adjust the color temperature of your screen (including normal, vivid, manual and “eye care” modes); choose from five audio presets; and disable the Windows key. But that’s about it. There’s an “advanced tuning” button as well as a system resource monitor, but these features just replicate the functions of the built-in Windows Task Manager. Being able to tweak screen and audio presets in one place is nice, but it’s not useful enough to warrant a dedicated keyboard button. If only the software suite included a key mapper — at least then the laptop’s ROG button might be able to do something useful.

The Strix does pack in one more standard ASUS gaming application: the Gamefirst network manager. This program isn’t necessary, but it is sort of neat, offering users an overview of their PC’s internet activity. Want to know what programs are using the most bandwidth, or prioritize Steam over Chrome for downloads? You can do that here. 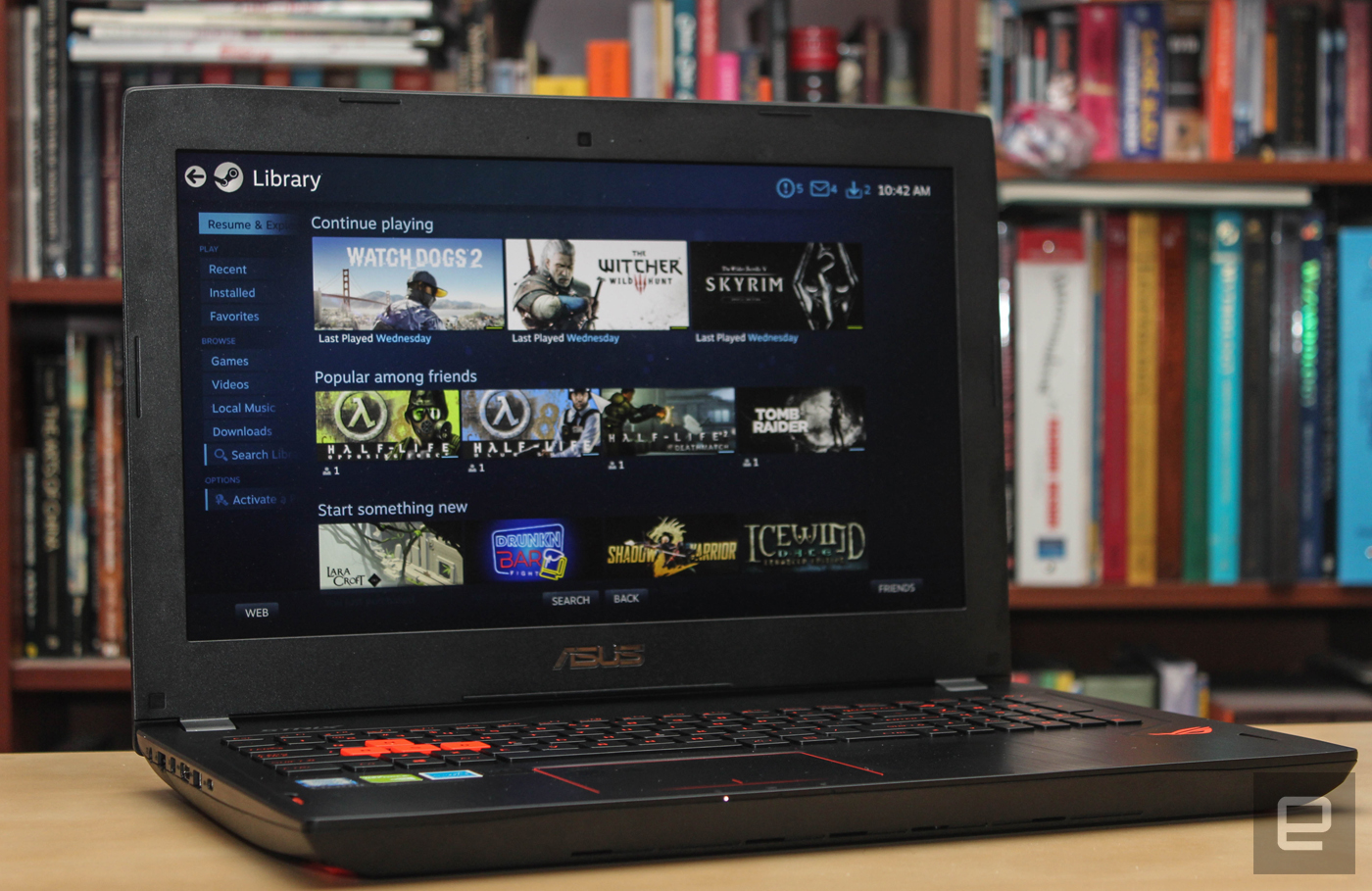 To cut the price by another $120 and change, be prepared to give up the “VR Ready” sticker, cut the solid-state storage in half and settle for last year’s GTX 970M GPU. Finally, bottom-dollar buyers can find a $1,200 model with the same CPU and RAM as our review unit, sans solid-state drive and paired with an NVIDIA GeForce GTX970M graphics card. ASUS says additional configurations exist too, but they vary from one country to another.

Not sure this is the right 15-inch gaming rig for you? You have plenty of other options: Dell’s Alienware 15 comes in an array of VR-Ready configurations between $1,350 and $1,750, with plenty of RAM, fast processors and NVIDIA GTX 1060 graphics chips — but you’ll need to shell out $2,150 for the top model if you want to match the Strix’s GTX 1070. MSI’s GT652VR Dominator is a close match to our review laptop as well, but it’ll cost you $100 more and leave you with half the RAM.

If you don’t mind having a slightly larger screen, the best bang-for-your-buck alternative might be HP’s 17-inch Omen, which can be configured with the same processor and GPU as the Strix for only $1,500. The trade-off: It ships with only 512GB of storage. 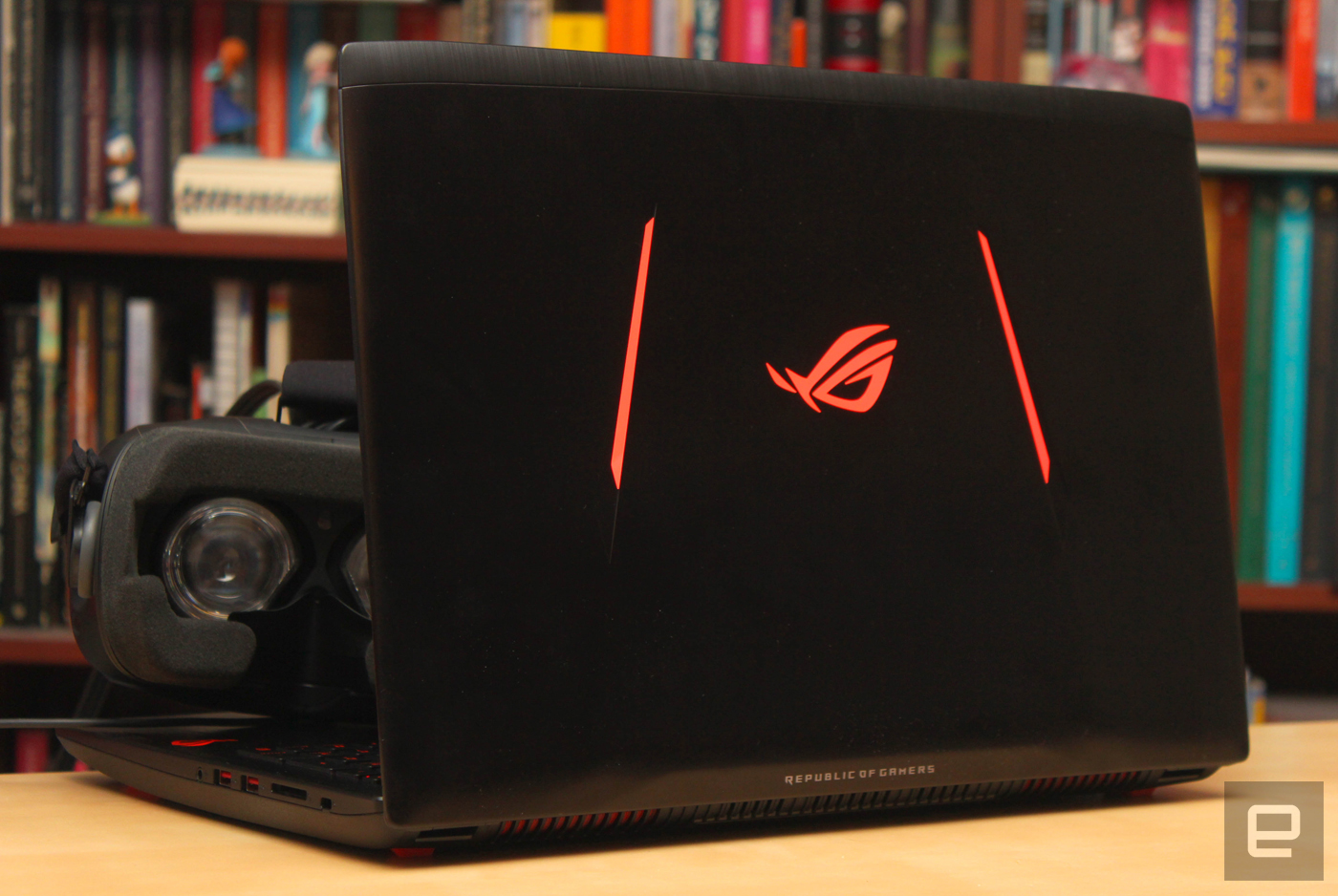 ASUS’ Republic of Gamers brand has a strong pedigree for reasonably priced, powerful gaming laptops, and the GL502VS Strix is exactly that: a mid-range gaming rig that can handle just about anything you might throw at it, even virtual reality. Some garish flourishes, subpar battery life and a disappointing trackpad keep it from being a truly excellent machine, but for those looking to split the difference between the category’s large, overpowered gaming rigs and its expensive ultraportables, the Strix is a solid choice.