Not long after Android Wear’s inception, ASUS entered the smartwatch market with the original ASUS ZenWatch. Although it didn’t quite offer the same level of appeal as the circular Moto 360, it marked the beginning of one of the best Android Wear lines to-date.

Two years and one iteration after its debut, the ZenWatch line is going circular with the ZenWatch 3; but does ASUS’ latest smartwatch offer a better experience than its competitors? Let’s find out with our comprehensive ASUS ZenWatch 3 review!

The ZenWatch 3 is available in three color options: Rose Gold, Silver, and Gunmetal (pictured above). Perhaps the most compelling design aspect is the watch face; a circular display is surrounded by an accented, diamond cut bezel, which meets with the device’s housing. Unlike the Moto 360, the ZenWatch 3 manages to pull this circular design off without a “flat tire.” There’s also still an ambient light sensor for automatic brightness. Encased in a 316L stainless steel body, the ZenWatch 3 certainly gives off a premium vibe from a material perspective. Its lugs may appear a bit unusual at first glance, but they actually compliment the rest of the design quite nicely with their subtlety. The wrist strap attachment mechanism is easy to use with its quick release pin, although it is proprietary, so you won’t be able to easily use third party bands. ASUS is planning to sell both leather and rubber bands separately, each available in dark brown and beige. With that said, the leather wrist strap that comes with the watch is surprisingly good, offering a good deal of both comfort and style. It may, however, be a tad too small for those with very large wrists. Despite having relatively small wrists myself, the ZenWatch’s band fit around the middle notch. If you’re worried about this, you should consider trying on the watch in a retail store before purchasing to make sure it fits well. 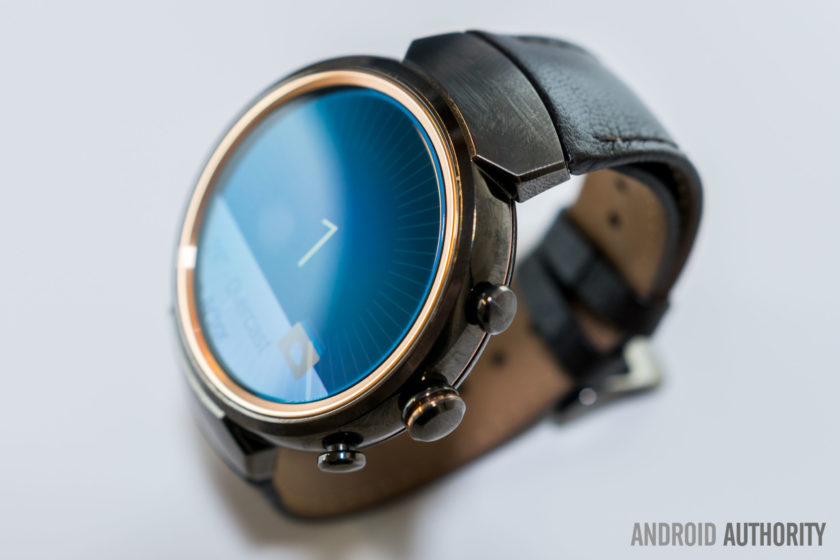 ASUS has also included three side buttons on the ZenWatch 3, all of which are satisfyingly tactile. Functionally speaking, the bottom button turns on airplane mode, the center button functions as a back button, and the top button can be set to launch an app of your choice.

I would have preferred just a single customizable side button

However, I very rarely found myself using these buttons, and often opted to interact with the touch screen instead. Quite frankly, three individual buttons feels excessive from a design perspective and overly complicated from a user experience perspective, so I would have preferred just a single customizable side button. Still, the buttons that ASUS has included both look and feel very premium. 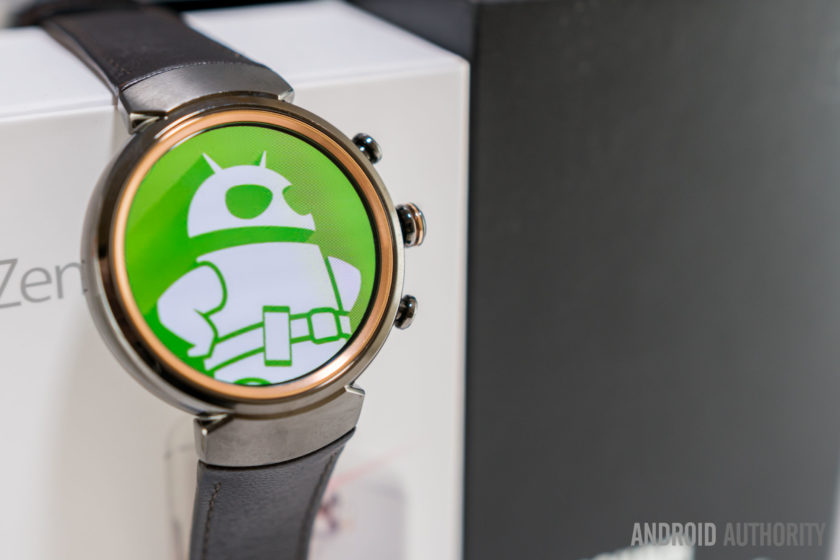 All things considered, the ZenWatch 3 offers a unique and stylish design. Some may argue that the gold bezel accent is a bit tacky, but I think it fits in well with the rest of the watch’s aesthetic. For what it’s worth, many of my friends commented on that aesthetic, and the general consensus was quite positive. 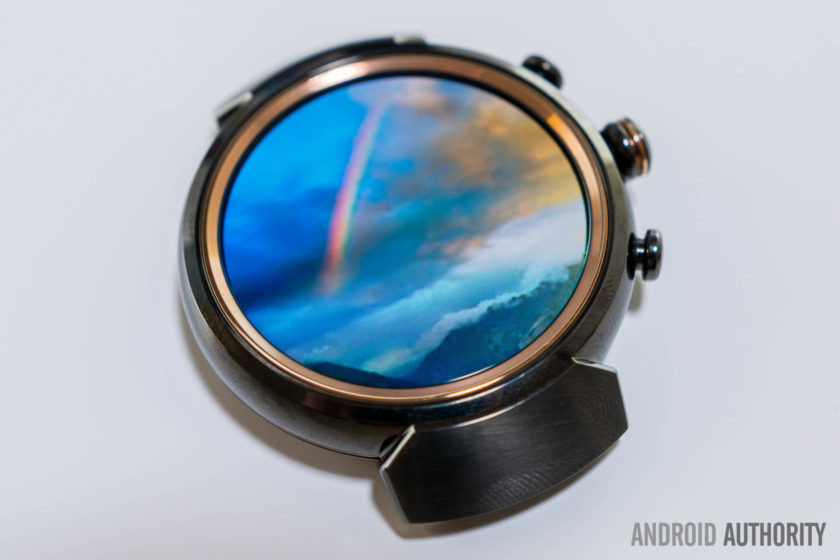 The ZenWatch 3 features a 1.39″ circular AMOLED display, with a resolution of 400 x 400. This is very likely the best display on a smartwatch to date.

The ambient light sensor allows for auto brightness, too, so you won’t have to worry about constantly fine tuning the brightness manually. My only gripe with this is that the ZenWatch tends to lower auto brightness levels, which can be a bit problematic in bright environments. Hopefully a software update can tweak this a bit.

There also isn’t a proper low brightness mode, so the watch’s “theater mode” just turns the display off completely. Sunlight readability is great though, and probably some of the best you’ll obtain from this form factor. One of the ZenWatch 3’s key advantages over last year’s Android Wear devices is its use of a Qualcomm Snapdragon Wear 2100. This chip has been touted to offer better performance and battery life since it’s designed specifically for smartwatches.

The better performance claim seems to hold water, too, as the ZenWatch 3’s performance was excellent during my testing. Swiping between cards and panels is very smooth, and it’s generally difficult to find an appreciable amount of lag throughout the interface. There’s also 512 MB of RAM, which is pretty much standard for Android Wear smartwatches. 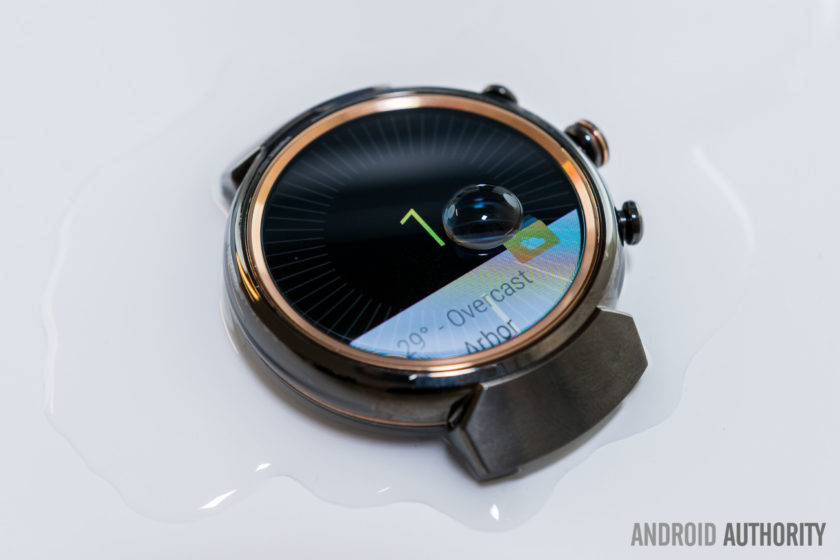 With IP67 certification, the ZenWatch 3 is dust proof and water resistant, meaning that it can be submerged in up to one meter of water for thirty minutes. While we wouldn’t recommend taking a shower with it, you won’t have to worry about it getting wet when washing your hands or sweaty when exercising.

For connectivity, the watch primarily uses Bluetooth 4.1 to connect with your phone, but also supports Wi-Fi as a fallback. Unfortunately, it lacks GPS and NFC, so you’ll be missing out on standalone Wear apps that use GPS as the potential for Android Pay, which will likely be coming in an upcoming update to Android Wear. It’s also lacking a heart rate monitor, which is fairly disappointing considering many competing Android Wear options include one. It does, however, include both a microphone and speaker, meaning that you’ll be able to place and receive calls on the watch directly. In my testing, both functioned about as well as I had expected. 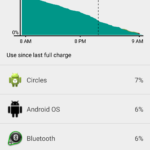 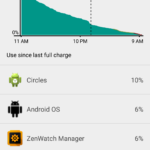 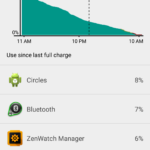 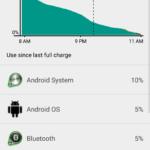 ASUS claims the ZenWatch 3’s 340mAh battery should last one to two days, depending on your usage. With moderate usage, I was able to get around twenty four hours per charge, which is about average for an Android Wear device. 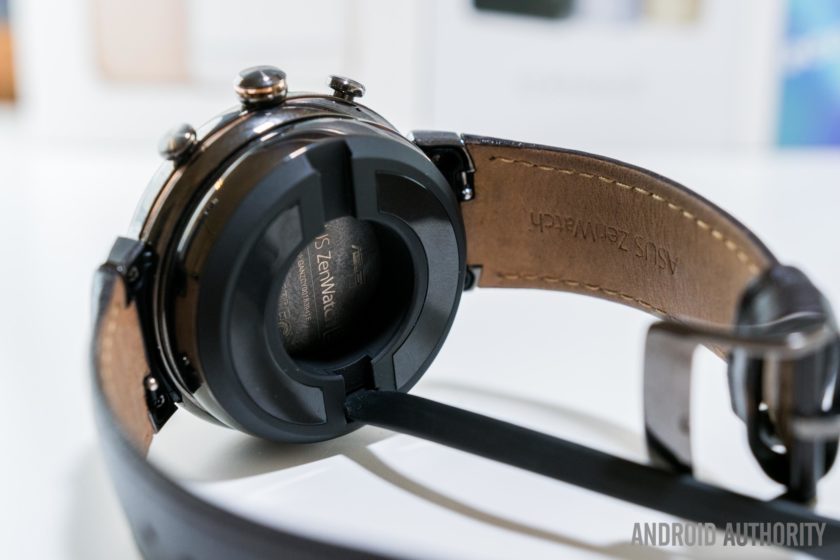 What makes the ZenWatch 3 particularly strong in this category is that it supports fast charging, for up to a 60% charge in fifteen minutes. In fact, the ZenWatch 3’s fast charging speed made it possible to fully charge it while I got ready each morning, which usually means about forty minutes on the charger.

The included charger connects to the watch magnetically and transfers power through the watch’s underside pins; it generally works quite well, too.

I would have liked to see a longer charging cable, however, as the one included in the box is a bit short at around a meter. Unfortunately, it doesn’t seem that you can currently buy a longer or even extra charging cable for the ZenWatch 3, so you’ll want to keep this in mind. 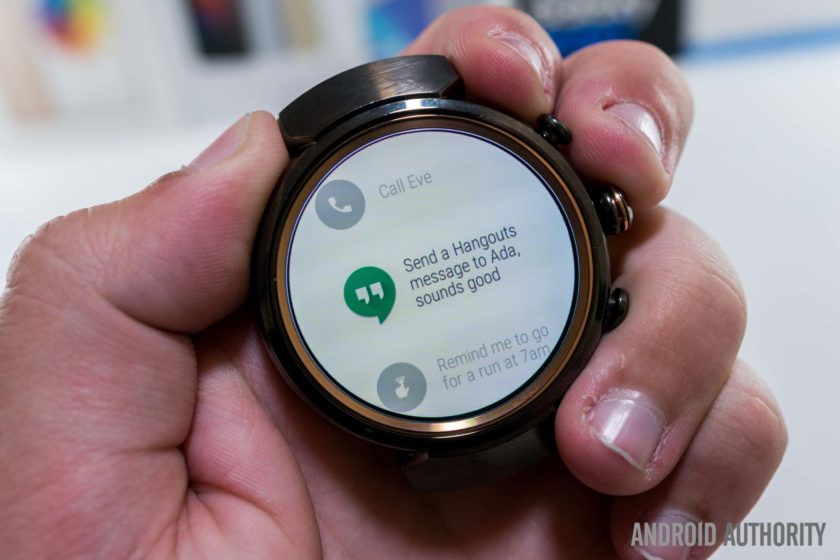 There’s not much to say when it comes to software. Shipping with Android Wear, the ZenWatch 3 provides an identical core experience to other Android Wear smartwatches. I did notice a few minor bugs while using the ZenWatch 3, but those can most likely be blamed on Google. The good news is that it looks like this watch will be updated to Android Wear 2.0, so the software experience will likely improve over time.

The software experience will likely only improve over time

With that said, the general interface today sounds complicated but is actually quite easy to use. The watch’s “home screen” is simply a watch face of your choice. From there, you can swipe up to see and act on different cards, which are added as you receive notifications on your phone. So, for example, if you receive a text message from a friend, you can simply swipe up on your watch to read it and have the opportunity to respond with your voice.

Since it is running Android Wear, the ZenWatch 3 is compatible with both Android 4.3 and higher as well as iOS 8.2 and higher, although features will vary by platform. Still, if you’re using an iPhone, this is a great, cheaper alternative to the Apple Watch. 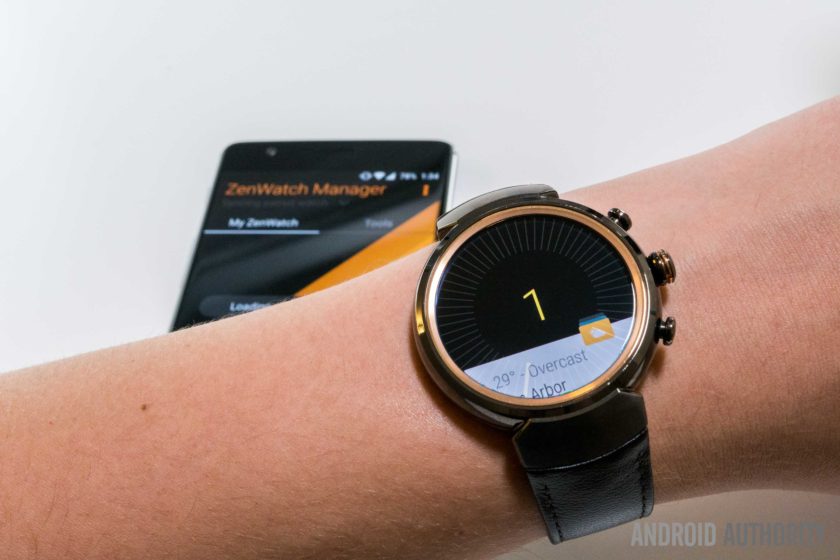 ASUS has a ZenWatch Manager app, which adds over fifty different exclusive watch faces. That’s an impressive number of options, but unfortunately there’s only a few really good ones. Do keep in mind that you can always download third party watch faces from the Google Play store, however.

There’s also ASUS ZenFit, a built-in app that tracks steps, workouts, and sleep. I found it to work very well overall, too, and was happy to see that includes Google Fit integration. 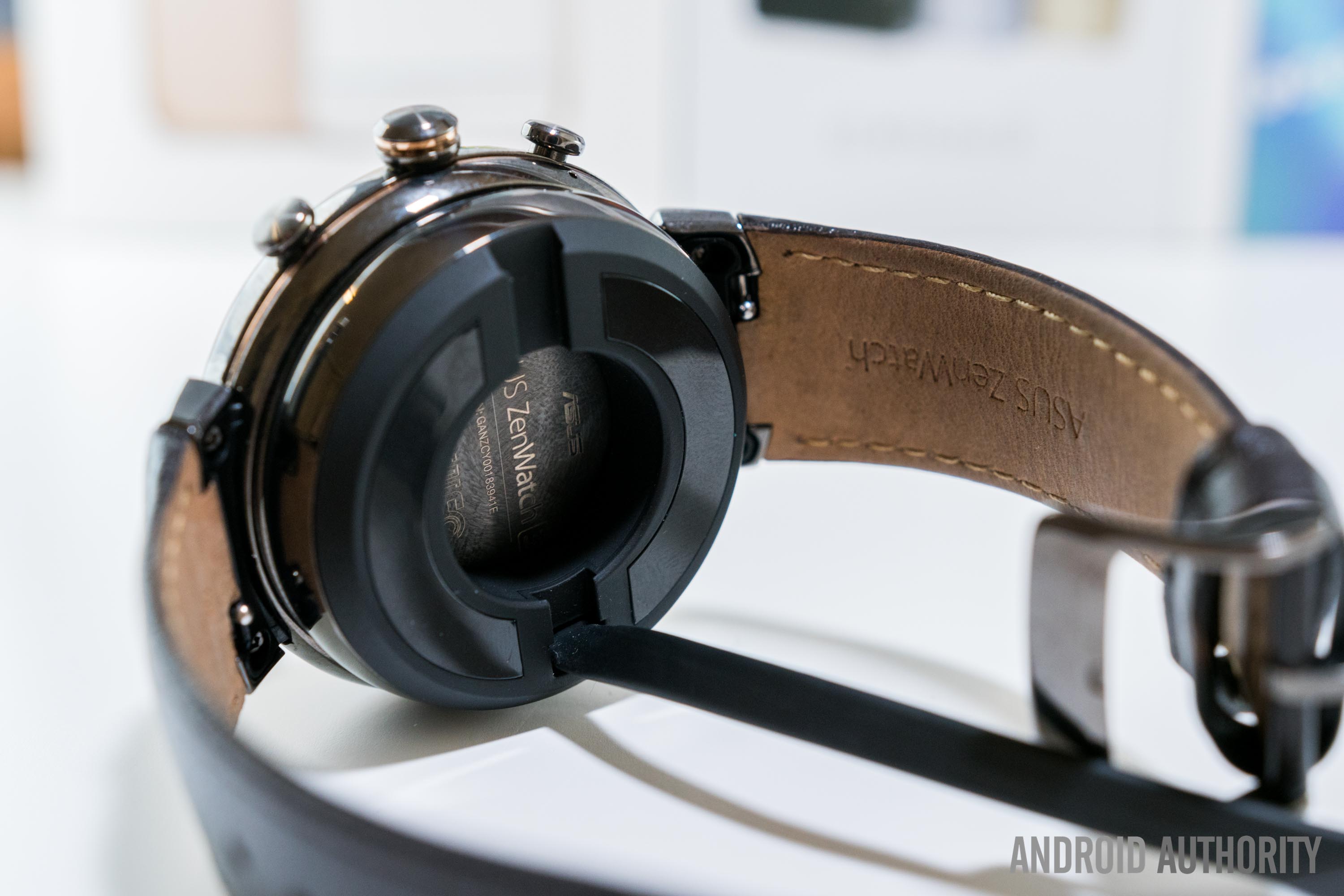 The ASUS ZenWatch 3 is now available from various retailers for $229. That’s a great bargain for what ASUS has brought to the table. It’s very difficult not to fall in love with the ZenWatch 3 with its beautiful design, great display, excellent performance, and solid hardware. If you’re looking for what is likely the most well-rounded smartwatch to date, look no further.

With that said, smartwatches largely still feel like a novelty. As much as I love the ZenWatch 3’s hardware, the overall experience isn’t enough for me to keep using it. Currently, it simply doesn’t do enough more than my smartphone, which I always keep on me. I understand that some will absolutely love having notifications on their wrist, but I personally find it too distracting. I also don’t request much more than my daily step count in terms of fitness, which my phone can also keep track of.

Here’s the thing ― smartwatches, at least in their current form, aren’t for everyone. If, however, you know the smartwatch concept is for you, the ZenWatch 3 is a great choice and you almost certainly won’t be disappointed.