Massive conglomerate IHeartRadio, which owns over 800 radio stations in the US, is getting into the on-demand music streaming market, just as it promised earlier this year. The company just added two paid plans to its iOS and Android app that bring many of the streaming features found in competitors like Spotify and Apple Music. First and foremost is the ability to search for and play any track you want, any time you want, without being beholden to whatever IHeartRadio’s FM stations are playing. That music library will be powered by Napster, which had been operating in the US at Rhapsody until recently.

The $4.99 IHeartRadio Plus plan is a way to augment the music-listening experience the app already offers. If you’re listening to the stream of a radio station and hear a song you like, you can instantly replay the track, save it to a “my music” playlist and then return to the live radio station. If you start a custom “artist radio” station (where you’ll get a generated playlist of similar songs to the artist you pick), you can skip as many songs as you want without limitation. And IHeartRadio says that users will be able to “search and play any song from a library of millions of tracks.”

That last feature sounds like you can get full access to the Napster online music library, a feature that’s typically reserved for the $9.99 tier in most streaming music services (Spotify’s free tier remains a notable exception). And indeed, IHeartRadio is also offering a $9.99 option: IHeartRadio All Access. So what’s the difference between these plans? 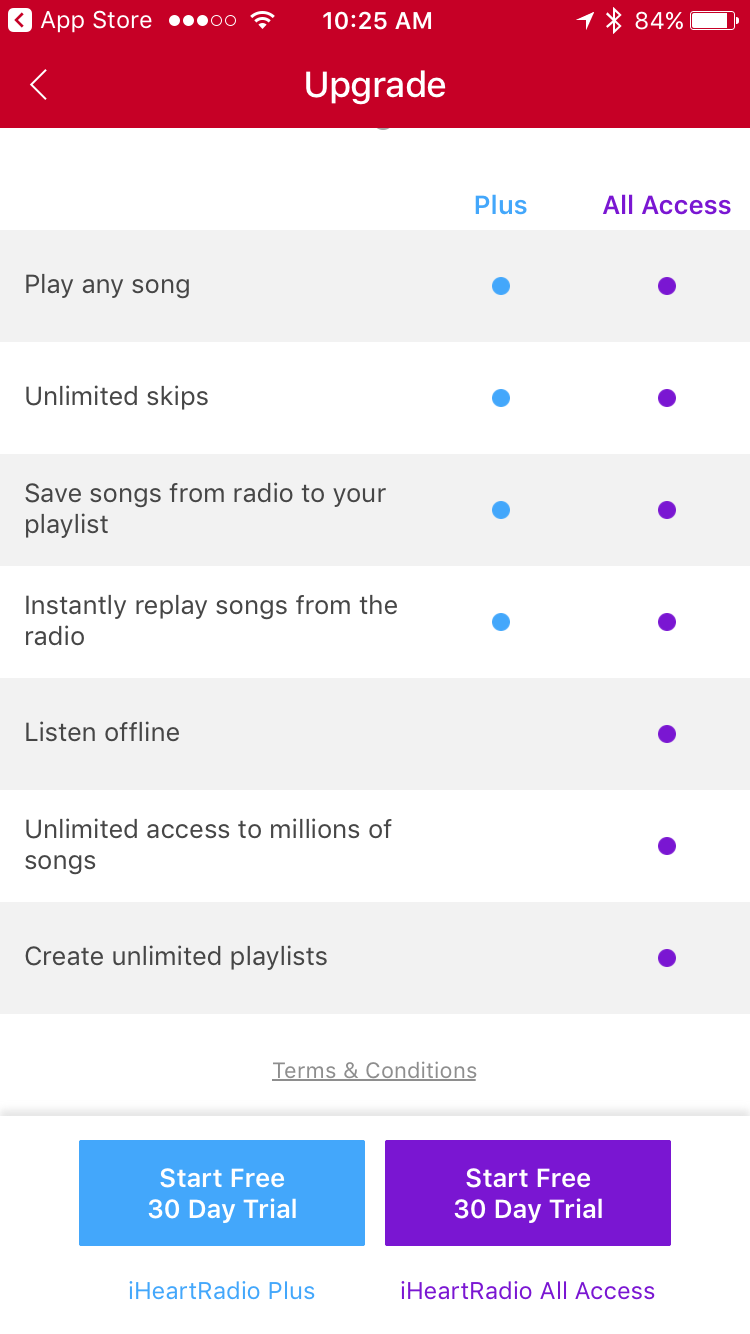 For starters, All Access gets you the ability to save tracks offline, a pretty big deal. Subscribers will also be able to fully build out a personal music library — we’re guessing that if you use the $4.99 tier, you’ll only have the ability to save tracks to the aforementioned “my music” playlist without being able to browse a collection by artist or album. IHeartRadio also says that you can create unlimited playlists at this top tier to organize your music, further supporting the notion that the $4.99 plan doesn’t offer much in the way of library management. It seems like you’ll be able to play any track you want from Napster’s library on either plan, you just won’t be able to build out your collection without shelling out more money.

It feels like the $4.99 IHeartRadio Plus plan is best viewed as a competitor to Pandora Plus — both plans cost the same and give users unlimited skips, but they’re not meant for curating and collecting music the way Spotify and Apple Music are. For all of that, you’ll need to shell out for the fully $9.99 IHeartRadio All Access option.

If you’re an FM radio junky, have been using the IHeartRadio app and don’t have a music subscription service, these new plans might be worth considering rather than the other options out there. But whether it’s worth your $10 over the many other options out there remains to be seen — we’ll have to take it out for a full spin before passing judgement. If you want to try it for yourself, IHeartRadio is offering 30-day trials to both Plus and All Access plans.