DirecTV Now is a good start for AT&T, but nothing truly original

If you’ve seen Sling TV or PlayStation Vue in action, AT&T’s DirecTV Now streaming service won’t offer up many surprises. Like the competition, it’ll let you stream live TV and on-demand content across a wide variety of devices — all you need is an internet connection. But right now, on the day of DirecTV Now’s launch, that’s pretty much all it is. There’s no cloud DVR functionality, which Vue has had for a while and Sling will soon start beta testing. And, strangely, there’s no support for Roku devices yet, which leaves out a significant chunk of its potential audience.

Despite those issues, there’s a good chance DirecTV Now will find some footing in the newfangled streaming TV ecosystem. It has the full backing of AT&T, after all, which is positioning the service as the start of an entirely new video platform (alongside its mobile Fullscreen and FreeVIEW services). The company plans to push DirecTV Now in all of its retail locations, which gives it more exposure to mainstream consumers than Sling. It’s tempting subscribers with deals featuring the new Apple TV, Amazon Fire TV Stick and LeeCo TVs. And it won’t count DirecTV Now streams against AT&T wireless customers’ data caps, which is a direct affront to net neutrality. DirecTV Now might just be too big to fail.

I had a chance to take an early look at the service’s Apple TV app, and for the most part it delivered a solid streaming TV experience. I didn’t go through the entire setup process (it came pre-installed on an Apple TV from AT&T), but upon launching it for the first time, it loaded up New York City’s ABC station in under a second. Moving to other live shows via the channel guide generally took two seconds at the most. It’s not as instant as some TV services, but it’s a lot better than the performance I saw at last night’s launch event. 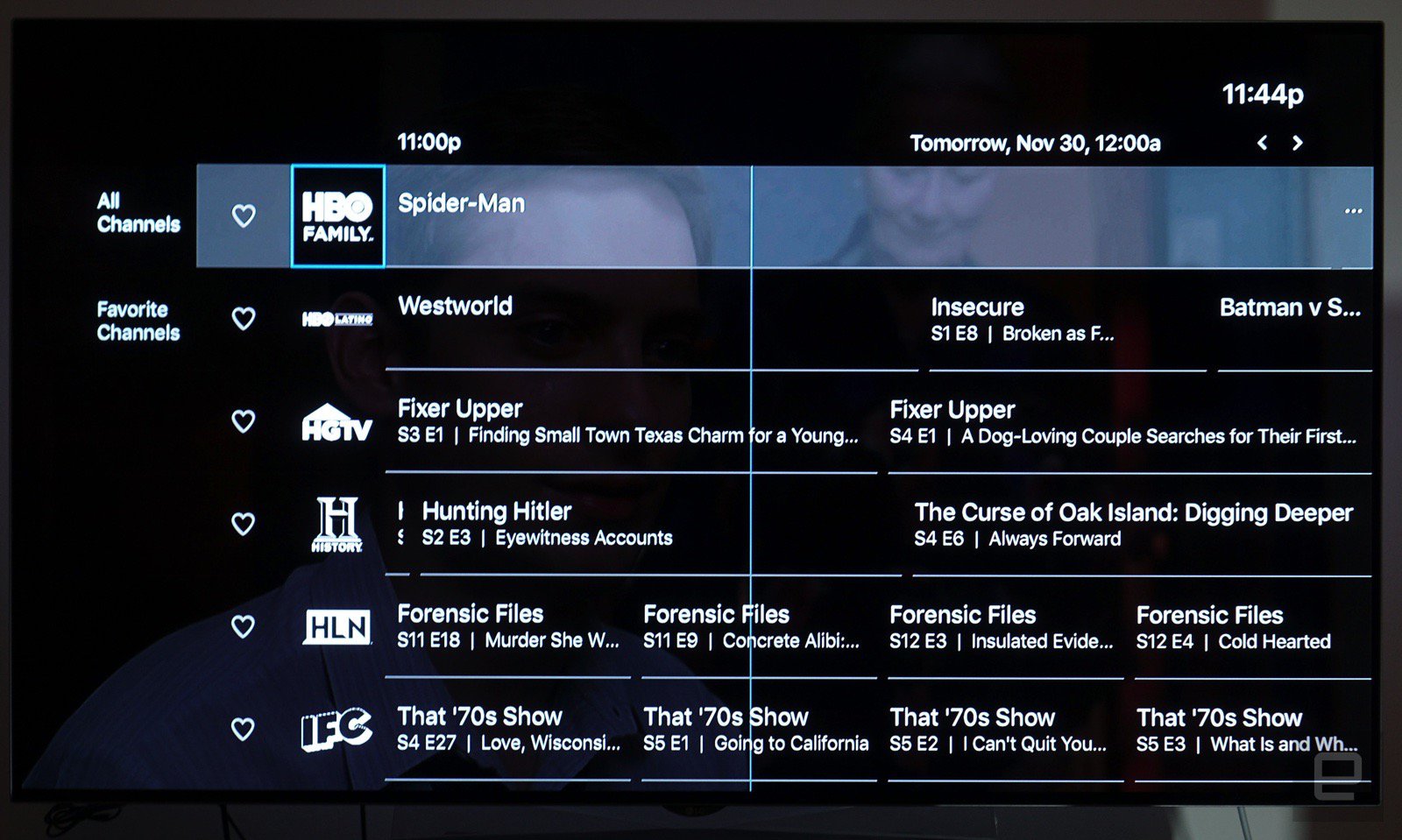 DirecTV Now’s video quality looked good for the most part, though I noticed some artifacts in scenes that were very dark or featured fast motion. Those are generally areas where most streaming services fall flat, though. As a test, I compared a few episodes of Anthony Bourdain’s Parts Unknown via CNN’s on demand selection against their iTunes counterparts. (What can I say? I’m a fan.) The iTunes files were clearly superior, thanks to a significantly higher bitrate. But DirecTV Now’s version still looked decent on my 4K OLED TV, and notably they looked on-par with what I’ve seen on Sling TV.

Swiping down on the Apple TV’s remote brings up the app’s top menu, which points you to the search feature, channel guide and settings. By swiping up, you can reach what’s airing live, the list of shows available on demand, movies on demand, or the channel guide. You certainly won’t be lacking ways to find bingewatching options. DirecTV Now’s interface might take some time to learn, but it’s a lot less clunky than Sling TV’s UI, which sometimes feels baffling. Another plus, it seems like DirecTV Now also has more on-demand offerings than Sling, at least based on what I’ve seen available on CNN, HGTV and FX. 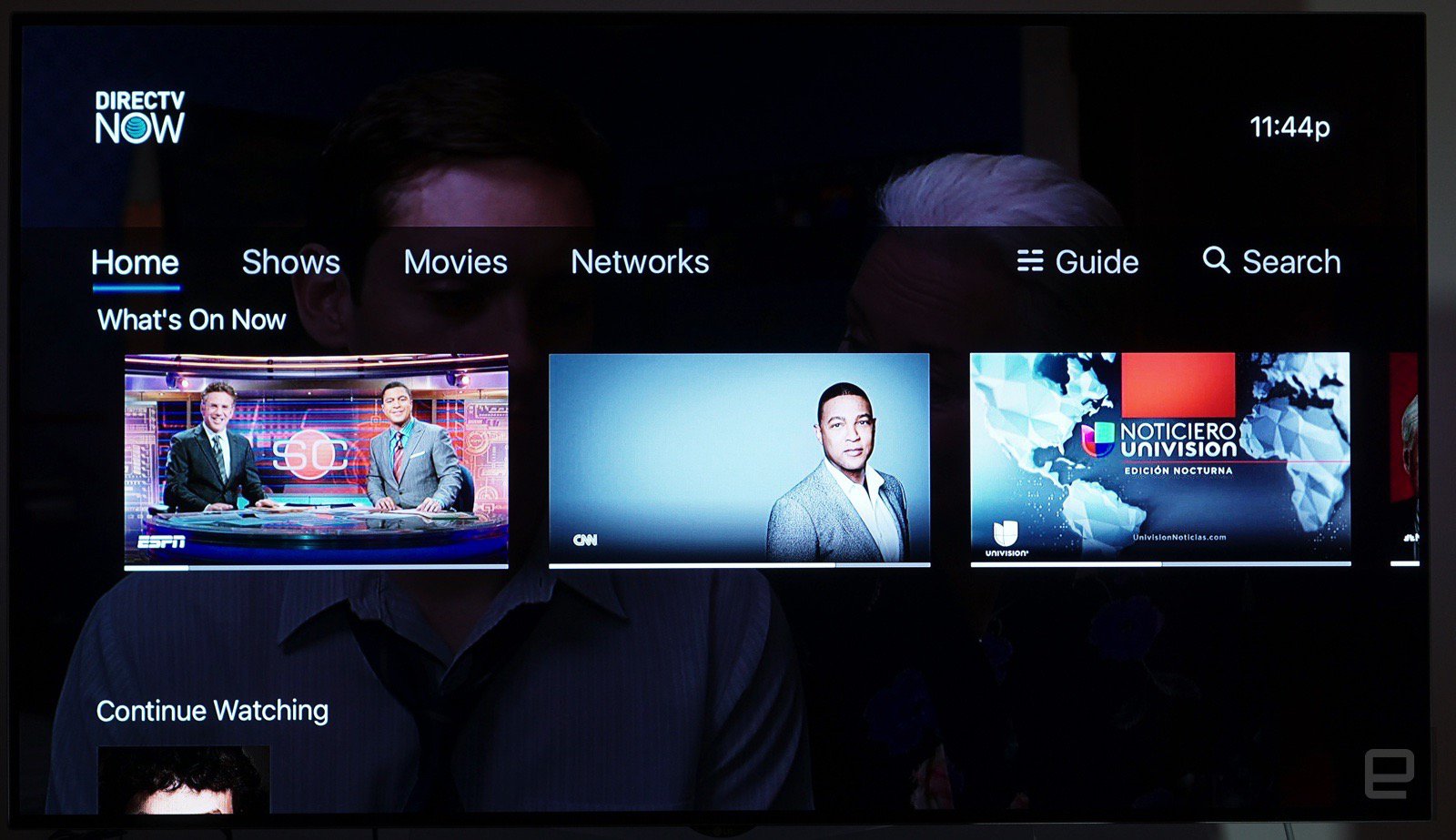 While AT&T executives made a big deal about their content deals during DirecTV Now’s launch event, you can expect the same sort of channel limitations as you would on Vue or Sling. Some channels might prevent fast forwarding and rewinding of content, for example. And whenever AT&T implements cloud DVR, you can also expect similar limitations to affect that feature, as it does on competing services. DirecTV Now also doesn’t have CBS or Showtime aboard yet, though AT&T says it’s “actively” working to sign them on. And unfortunately, there’s no support for NFL Sunday Ticket either.

Aside from the baffling choice to launch without Roku support, the most disappointing aspect of DirecTV Now is that it’s pricing is nowhere near as aggressive as AT&T originally implied (execs were floating the figure as last month). Sure, for now you can lock in over 100 channels for $35 a month as a promotional offer, but the company was very clear to point out that’s just temporary. Future subscribers will get 60 channels for that price, while the 100 channel option will go for $60 a month. PlayStation Vue, in comparison, starts at $30 a month for around 45 channels (depending on your market, it might be more), while Sling TV starts at $20 a month with fewer channels.

For now, AT&T has basically proven it can build a decent streaming TV service. But with Vue and Sling already having a head start, and similar services supposedly in the works from Apple and Google, it’s looking like there will be plenty of competition ahead. AT&T will probably find some sort of toe-hold through sheer force of marketing alone, but it’s unclear if DirecTV Now will be able to thrive, or just survive.

Read more from News
at&t, News
← Steam will tell you what games work with OSVR
‘No Man’s Sky’ cleared in false advertising investigation →