Why are dinosaurs everywhere in VR?

There’s a key scene early in Jurassic Park when the visiting scientists see their first dinosaur in person. Paleontologist Alan Grant (Sam Neill) and paleobotanist Ellie Sattler (Laura Dern) clamber out of their Jeep as they stare at the majestic brachiosaur looming above them. “It’s a dinosaur,” Grant stammers in disbelief. His reaction matches the audience’s: After a lifetime of looking at fossils and picture books, here, in the flesh, is a real, live dinosaur. We’ll never experience this ourselves, but virtual reality can convincingly take us face to face with these extinct creatures.


That’s no coincidence. When done right, VR’s ability to convey presence — the feeling of actually being somewhere — is unrivaled by any other medium. Nowhere is that more apparent than when you’re craning your neck to take in the size of the zebra-striped brachiosaur lumbering through a tar pit in Crytek’s Robinson: The Journey. Same goes for ducking under a bellowing tyrannosaur stomping through a museum hall in an Oculus tech demo. Some 65 million years later, developers love to resurrect nature’s most fearsome creatures in VR. But why?

“Dinosaurs have an epic sense of scale that immediately makes you appreciate the potential of VR,” Derrick Hammond, an environmental artist at Oculus, tells Engadget. For example, one of the experiences in Oculus’ Dreamdeck sampler is set in a museum late at night. The marble hallway is lined with fossils, and a poster proudly proclaiming “Rex Lives” hangs above a relatively small T. rex skull. Then a menacing growl and thunderous footsteps echo in the distance. You’re frozen in place while a hulking version of the real thing stomps toward you, teeth bared, letting out a room-shaking roar that echoes off the museum’s stone and glass. It comes closer, towering over you, allowing an intimate look at its murderous maw before walking over you and offering a view of its pebbled underbelly.

“We made sure that the T. rex gets right up in your face and looms over you so that you could really feel the size of it,” Hammond said. Spielberg doesn’t have a thing on this.

Interacting with one of history’s largest apex predators in VR is very different from playing Turok: The Dinosaur Hunter or passively watching Jurassic Park, though. Your brain inherently knows that you’re playing an old game or watching a movie. “[It’s] so much more powerful than seeing them as a 2D representation on a television screen or monitor,” Hammond said.

Crytek’s Elijah Freeman agrees. When his team was researching potential projects, they discovered that scale and verticality look their best in VR. “It gives you that sense of immersion when you look up to see something large and gigantic,” he said. Hence, going forward with Robinson, a game that finds the player crash-landed on an alien jungle planet where feathered velociraptors are as common as leopards, a juvenile T. rex is a constant companion.

“We made sure that the T. rex gets right up in your face and looms over you so that you could really feel the size of it.”

While we still have grizzly bears and giraffes today, they don’t inspire the same kind of awe. You can watch them pretty much anytime you turn on Animal Planet or the Discovery Channel. In contrast, seeing an extinct creature “in person” that you’ve only read about or whose skeletons you’ve seen in museums is almost therapeutic. Witnessing a brachiosaur rear up on its hind legs because you ordered your pet T. rex to roar at it, for instance, immediately transports you back to childhood — a time where anything felt possible if you imagined hard enough.

“It’s the experience that I’m seeing something that no one else gets to see,” Freeman said. “Maybe interacting with an elephant [in real life] could be a cool experience, but you’re risking your life to do it.”

Hammond added that one of the big selling points of VR is the ability to “experience anything, anywhere.” That pitch is a big part of getting people to latch onto the medium. “Dinosaurs offer so many different qualities that fulfill that promise by letting you stand next to a creature you feel as familiar with as an elephant or giraffe but could never actually see at the zoo or in your lifetime,” he said.

Freeman said having a robust narrative adds to the medium’s transportive nature and helps further sell the illusion. We already know what dinosaurs are and why they went extinct. And, thanks to a lifetime of scientific research and pop culture, we have a general idea of how they should act, be they peaceful herbivores or fearsome predators. 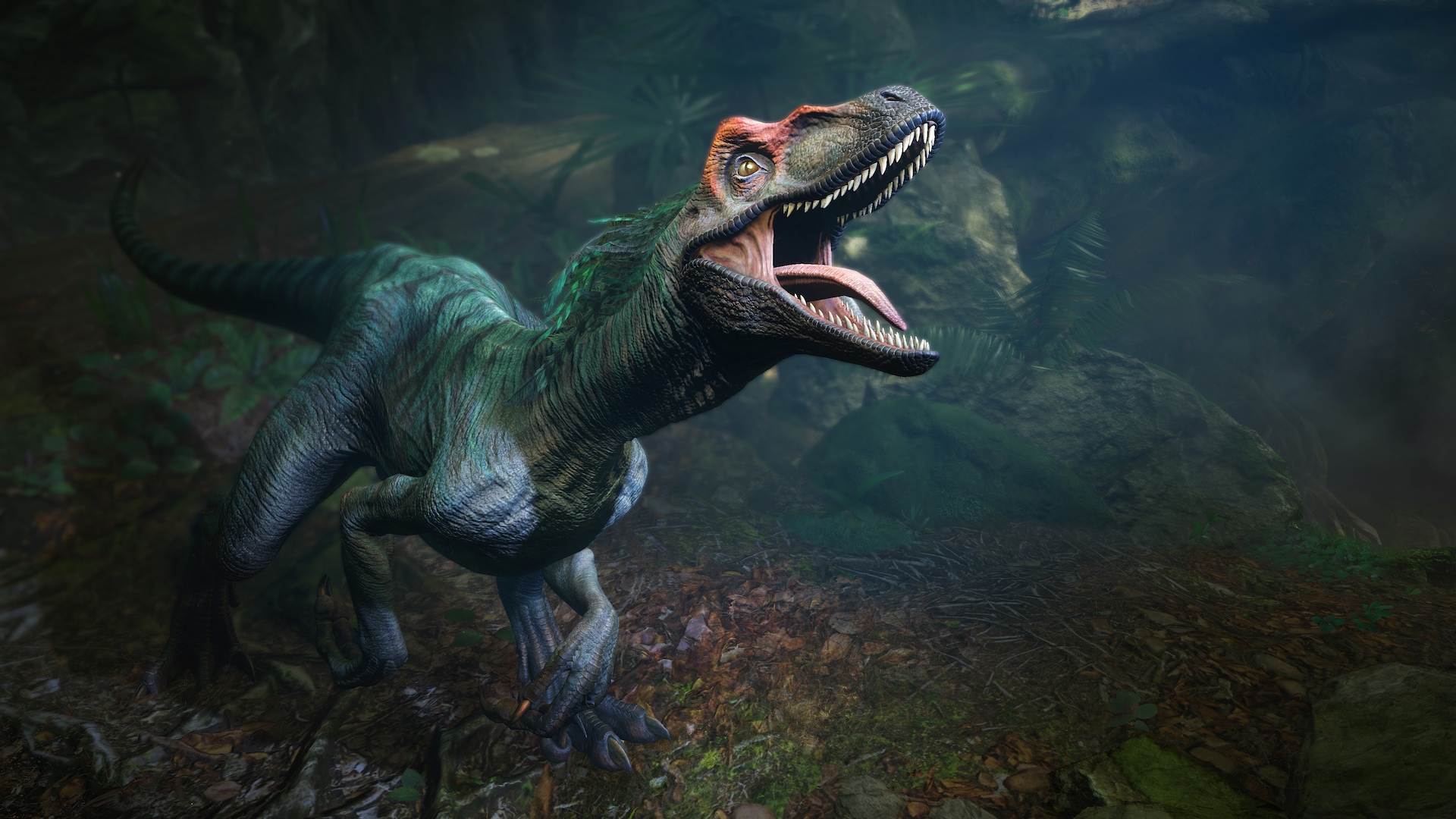 A velociraptor from Robinson: The Journey.

Even though both Oculus and Crytek’s dinosaurs differ slightly from what we saw in Jurassic Park, they largely behave in the same ways. Raptors, despite their smaller stature in Robinson, are still vicious pack-hunters. Brachiosaurs are more concerned with being giant, adorable doorstops and eating plant matter than they are with the actions of puny humans. The T. rex, of course, remains the tyrant king of dinosaurs.

“In this world,” Freeman said, “when you see that, given the story that you already know, it helps make it more believable.”

Maybe that’s why when he played an early demo of the game, Freeman reacted the same way Grant and Sattler did upon seeing his first brachiosaur. The 3D model might not have had any textures applied to it yet, but for the test run, it had been animated to have its head buried in the treetops, chowing food. Until a coworker asked him what he thought, he’d lost himself simply watching the extinct vegetarian strip a tree bare.

“I felt special,” he recalled. “I felt like I got to witness something that doesn’t happen anymore.”