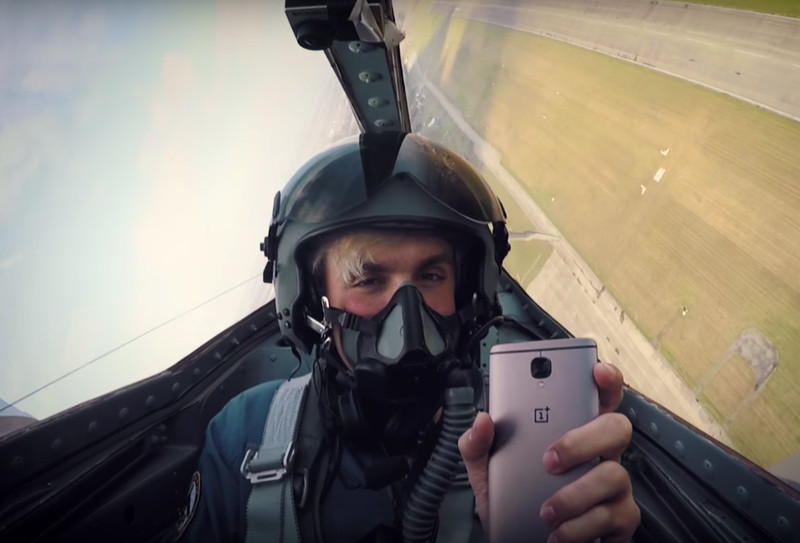 In honor of the OnePlus 3T — the souped-up version of the OnePlus 3 the company released back in June — OnePlus enlisted some help to give its speedier new model an unboxing video worthy of the new Snapdragon 821 processor, 16MP front-facing camera, beefed-up 3400mAh battery, and new 128GB storage option.

Yes, that’s YouTuber and Vine star Jake Paul taking the OnePlus 3T along for a ride in a Mig 15 at an airbase in the Czech Republic. Watch as Paul tries to keep his composure, unboxing the new OnePlus 3T in Gunmetal Grey, talking about some of the upgraded features while the pilot ahead of him take the fighter jet pulls off aerial stunts at dizzying heights.

While cynical YouTube commenters have been quick to question the value of what would seem like a pretty expensive concept for what resulted in a rather superfluous two-minute unboxing offering little insight or informational value for the phone itself, we’re fine to take this fun vid strictly at face value. Besides, it’s easily the coolest unboxing video we’ve seen since T-Mobile unboxed the Samsung Galaxy S7 underwater to showcase the IP68 dust- and water-resistance of Samsung’s 2016 flagship device.

Read more from News
News
← Google Pixel XL: One month later
Get your holiday shopping done early with this 20% discount at ShopAndroid →