For some only one style of beverage ice will do. Called nugget or compressed ice, this special form of frozen water is soft, light, and particularly easy to chew. Outside of a few restaurant chains and gas station snack bars, however, nugget ice is hard to come by. And though you can buy nugget ice machines qualified for home use, they’re exorbitantly priced at about 2 to 3 thousand dollars a pop. GE’s FirstBuild microfactory plans to disrupt the nugget ice market with its fresh appliance, the $499 Opal Nugget Ice.

Designed to produce sought-after nugget ice at home and with speed, the more affordable Opal Nugget Ice is also compact and made to fit easily on to cramped kitchen counters. The Opal will boast a bevy of high-tech sensors too for automatic operation plus feature multipurpose controls and a colorful LED status light. 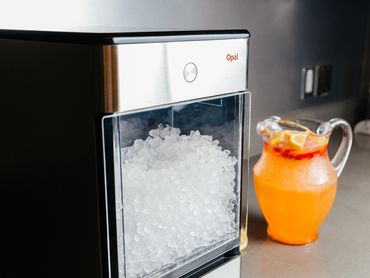 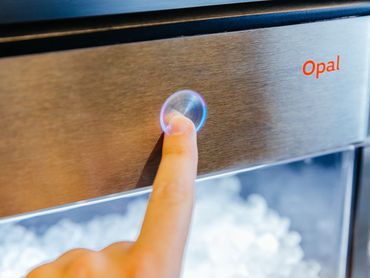 Though the Opal Nugget Ice I saw up close was an engineering prototype, I was still impressed by its clean-lined appearance. The cube-shaped Opal Nugget Ice looks more like a robotic attendant than an ice maker. Occupying the center of the appliance is a large, transparent ice bucket. Deeply recessed into the machine, it almost sits flush with the Opal’s front face. This helps the clear container act as a window to ice production and provides a fast way to check how much ice you have on hand. 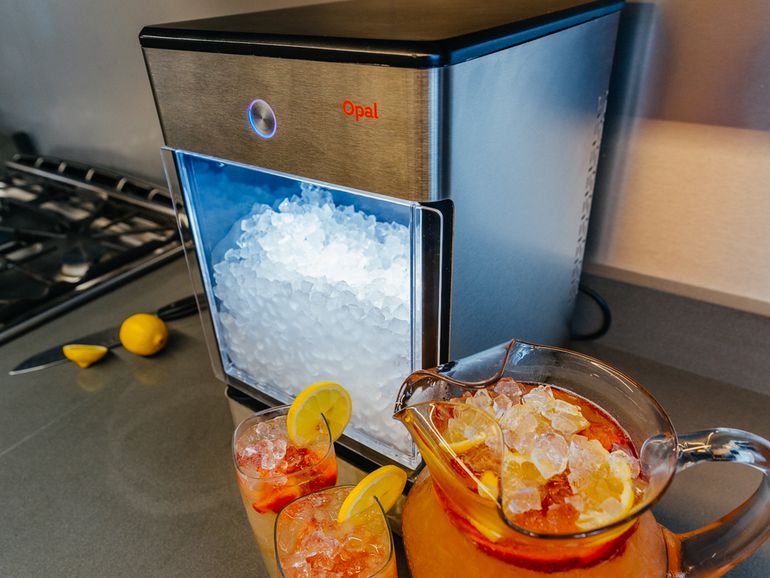 The Opal Nugget Ice is compact and futuristic-looking. Tyler Lizenby/CNET

Standing 16.5 inches tall by 10.5 inches wide and stretching 14 inches deep, the Opal is compact as well. It takes up about as much space as two large drip coffee machines standing back to back. That might sound clunky, but the machine is a fraction of the size of commercial nugget ice models you’ll find in restaurants and fast-food joints. Compared with those professional monsters which tip the scales on the order of hundreds of pounds, the Opal Nugget Ice is positively minuscule.

Just because it’s small doesn’t mean the Opal Nugget Ice isn’t built to perform. FirstBuild representatives I spoke to explained that the scrappy device can create 1 pound of nugget ice per hour. Given this speed you’ll be able to hit the Opal’s maximum ice capacity of 3 pounds in 3 hours. By comparison your average kitchen refrigerator’s ice maker needs a full day (24 hours) to make the same amount of ice. Hidden underneath the ice bucket is the Opal’s 6-cup reservoir, which should supply enough water for 3 pounds (3 quarts) worth of nugget ice. 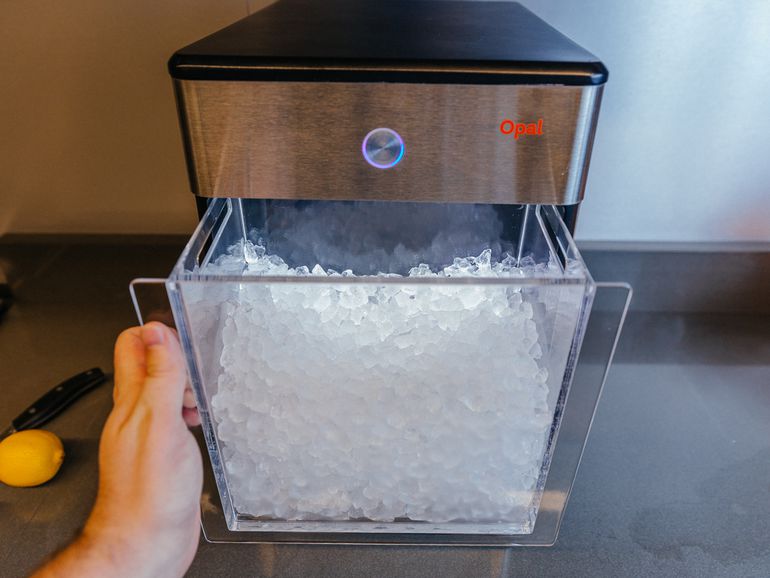 The ice bucket is removable and holds a max of 3 pounds of nugget ice. Tyler Lizenby/CNET

Above the bucket is the Opal Nugget Ice’s only control, a circular thumb-size button. Ringed by an LED that changes color to match which mode the machine is in, the button will command the Opal to perform various duties and also indicate the device’s status. These include modes for standby, error, and of course ice making. At the time of my Opal Nugget Ice demo, though, FirstBuild engineers said they were still hammering out details for the control’s operation. 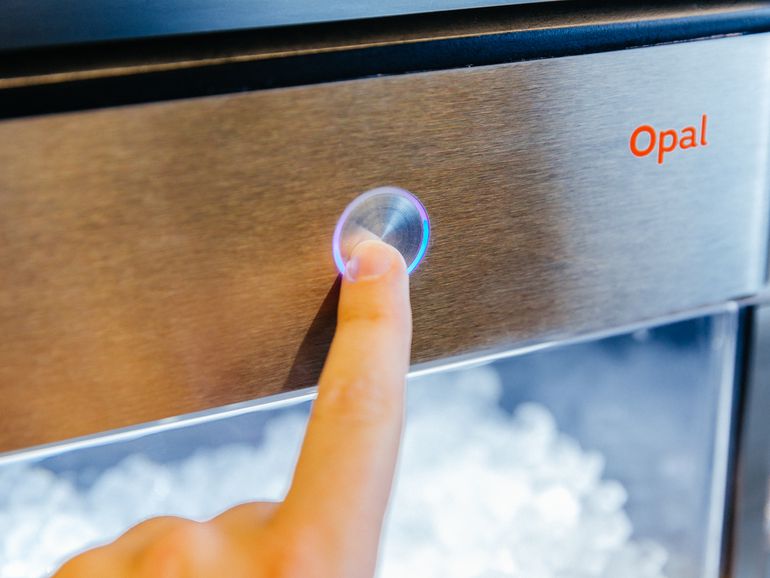 I confess that as a native New Yorker the allure of nugget ice is still a mystery to me, and shelling out $500 for a dedicated nugget ice machine for the home seems frivolous. That said, there’s no doubt a demand for this particular ice variety, compelling people to frequent specific fast-food chains just to get their hands on the stuff.

Couple nugget ice’s limited availability with a true lack of models designed for home use and it’s easy to see a bright future for the Opal Nugget Ice. The machine’s more reasonable $500 price is also very attractive compared with dropping 2 or 3 thousand dollars on a commercial nugget ice maker. 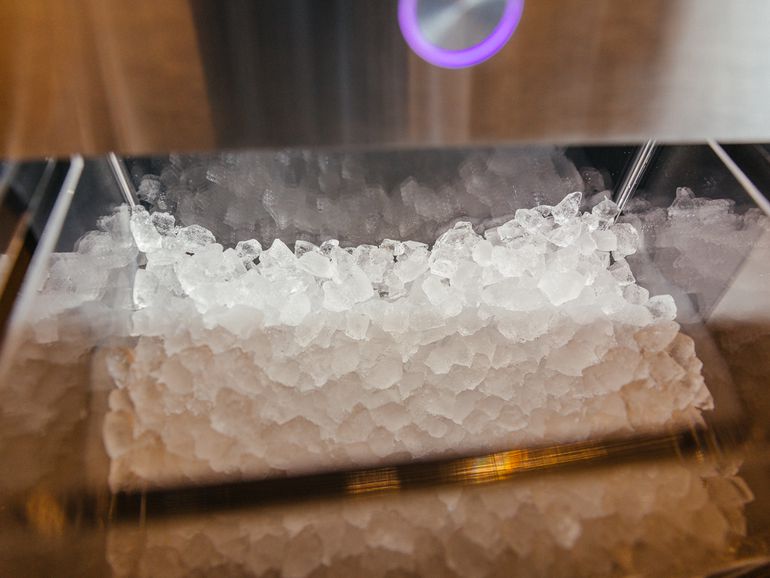 Does the idea of having an unlimited supply of nugget ice make you drool? Tyler Lizenby/CNET

Interested in a shiny new Opal Nugget Ice of your very own? You have a bit of a wait in store; FirstBuild expects the product to hit retail in summer 2016. Even so, you may have a chance to get a unit sooner and for a bit less money if you back the Opal’s Indiegogo crowdfunding campaign. You can find details about how to get on board at the Opal Nugget Ice’s official website.