The Passport foldable drone makes for a fun travel companion

My first drone flight experience was with the DJI Phantom 2 Vision, and as much as I appreciated its advanced capabilities at the time, I longed for something more compact — a device so small that I wouldn’t need to carry a separate bag or case for it, preferably without sacrificing performance. Eventually, a Chinese startup called Zero Zero Robotics released the $599 Hover Camera Passport, which comes in the unique form of a foldable cage while packing cool features like body tracking, face tracking and orbiting. I got to spend some time with the Passport over the past few weeks, and eventually it got to the point where I rarely leave home without it, lest I find time to take it for a quick spin.

Compared to higher-end foldable drones like DJI’s Mavic Pro and GoPro’s Karma (assuming GoPro issues a fix for random power losses), the Passport’s major advantages are its size, weight and caged propellers. At just 242 grams, or 0.53 pounds, the Passport is exempt from the FAA’s mandatory registration and is also unlikely to hurt anyone should something go wrong, as its propellers are shielded by a carbon fiber enclosure. When folded, it’s just 33mm (1.3 inches) thick, and even in its 45mm-thick protective case (which stores the drone and two batteries), it fits in my backpack with plenty of room to spare.

Speaking of, I’m impressed by the thoughtful set of accessories included in the box. In addition to that aforementioned protective case, there’s a shoulder strap for it, a soft bag (just make sure you won’t squash the drone), a second battery, a dual-battery charger, a USB 3.0 cable, four spare propellers, 12 extra screws and a pair of screwdrivers.

Zero Zero Robotics is currently only selling the full drone package, but you’ll soon be able to buy spare accessories as well, including batteries for $40 apiece. (In fact, the company will be throwing in a third battery plus free shipping as part of a Black Friday promotion.) From my experience, each battery offers a flight time of about 10 minutes, as promised, and it takes about 40 minutes to recharge each, so the more the merrier. 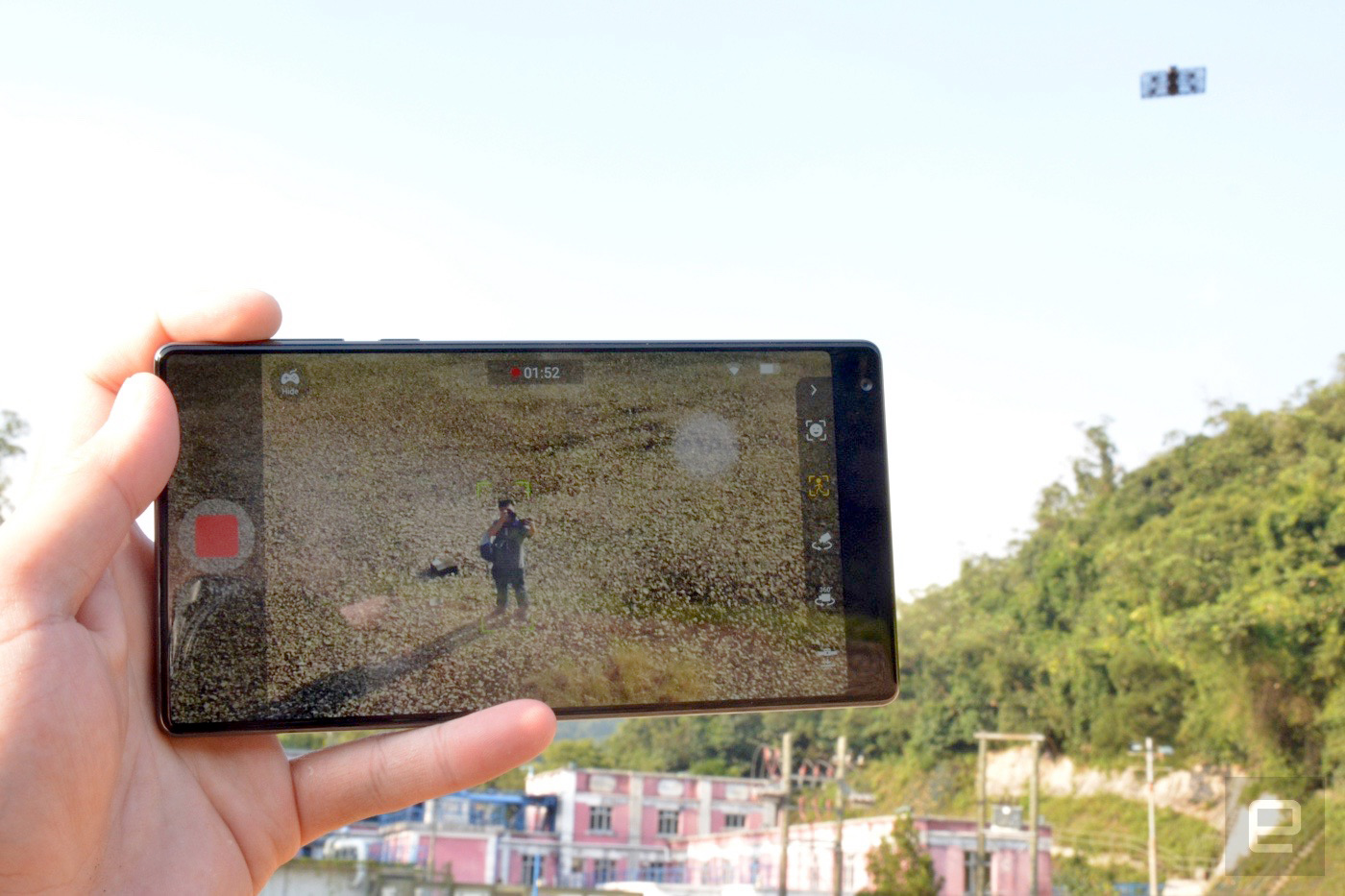 The Passport doesn’t come with a dedicated controller, as it’s geared mostly towards casual users. You’ll have to download the companion Hover Camera app onto your iOS or Android device and then connect it to the drone’s WiFi hotspot over 2.4GHz or 5GHz (you’ll want the latter for better streaming quality; both go up to 20 meters). This is all very straightforward as is navigating through the relatively simple interface. As someone familiar with the basic controls for the DJI Phantom series, I tend to pick the “Joystick” control mode (my preferred mode) instead of “Classic” (up and down buttons for height and a four-way pad for horizontal direction) or “Motion” (a height stick and a toggle button for tilt control).

Unlike most other drones, the Passport can only be launched from one’s hand: Hold up the powered-on unit with its wings open, tap the power button to rev up the propellers for about one second, and then release the unit to let it hover. Similarly, you can retrieve the hovering Passport with your hand without ever having to worry about the blades: Grab it and tap the power button to kill the propellers, or you can first tilt the unit downward to slow the propellers down before tapping the power button. When the battery level is critically low, the drone can slowly land itself using the sonar sensor under its belly; you can also use the One-Touch Landing button to toggle automatic landing at any time.

It’s safe to say that the Passport is one of the very few — if not the only — drones that can be launched and retrieved so safely. This is guaranteed to impress your family, friends and strangers alike — in my case, strangers include the security officers at Xiamen Gaoqi International Airport who were so curious they didn’t mind me flying the drone inside the building. 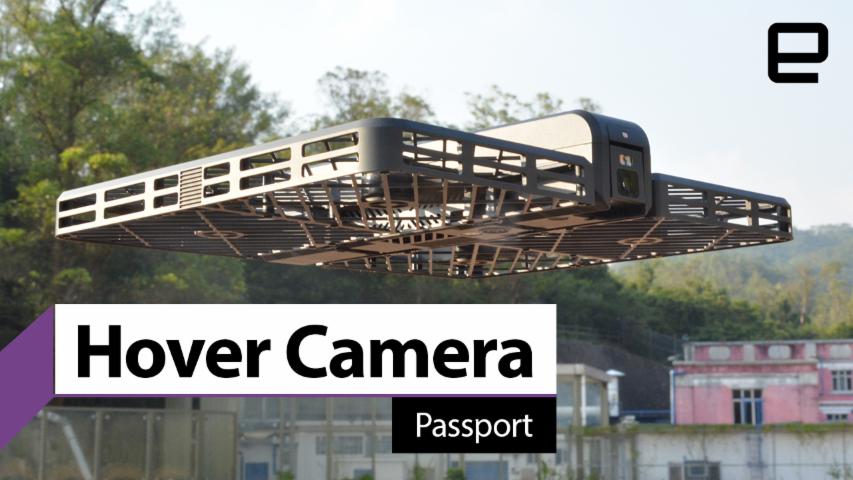 The Passport’s camera features a 13-megapixel CMOS sensor that can capture video at 4K, 1080p and 720p, all with a normal frame rate of 30 fps. All captured images and videos are stored in the 32GB internal memory (my unit showed 22.6GB of usable space after formatting), and since the Passport is basically a Qualcomm Snapdragon Flight 801 device running on Android, you can transfer its content to your PC in the same way you do with Android phones. With the exception of 4K clips, you can also download the content directly from the app to your smartphone.

During my vacation in Okinawa, I captured all my Passport footage in 4K without realizing that only the lower resolutions support electronic stabilization — a necessary feature since the camera hinges on just a one-directional gimbal as opposed to the three-axis gimbal on more advanced drones. I’m glad that I did use the 4K setting by accident as, truth be told, even with the slightest breeze I was bound to see some shakiness, regardless of the video resolution. If it’s a moderately windy day, forget it — the lightweight Passport won’t stand a chance. That said, braver folks may want to challenge Mother Nature by toggling “Beast Mode” for the maximum flying speed of eight meters per second (about 17.9 miles per hour).

Back in Hong Kong, I found that it’s only a tad better with electronic stabilization at 1080p resolution, but it’s the loss in detail that’s more noticeable. In some cases, I could even see some annoying warping across the frame due to the electronic stabilization. To put things in perspective, the Passport’s 1080p clips have a maximum video bit rate of 16 Mbps (I get 17 Mbps from the Samsung S7 Edge and 20 Mbps from the Xiaomi Mi 5s) whereas its 4K clips are capped at a more impressive 60 Mbps (beating the S7 Edge’s 48.1 Mbps and the Mi 5s’ 42 Mbps).

Simply put, I don’t think it’s worth giving up the 4K sharpness for that little bit of stabilization; I’d rather stick with 4K and use PC video-editing software to stabilize the clips afterwards. Shakiness aside, I’m actually quite happy with the general picture quality offered by the Passport, so long as there’s plenty of daylight. There were a few still images which could use a slight boost in exposure, but that’s an easy fix. And when it’s dark, you can try using the dual-tone LED flash for the still shots.

As I mentioned earlier, the Passport is capable of face tracking and body tracking. Just pick one of these features in the sidebar, and when you see a yellow bracket around you (you need to keep a minimum distance of four meters from the drone), tap on it and off you go (it’ll start recording as well if you weren’t already recording). Despite the wind, my unit did surprisingly well in chasing after me along the beach in Okinawa. I also had similar success on a soccer field and along a waterfront park in Hong Kong, and the drone could even follow me walking up the stairs — up to the point where I had to make a turn to walk along the bridge, but the bridge wall partially blocked the drone’s sight of me.

Another neat video recording feature is the orbit mode because it’s the easiest way to make anyone look cool. Once the app recognizes me, I just have to tap the yellow bracket on my face and the drone will start circling around me until I stop it. The one thing you need to be wary of here is that the drone may drift a little in the wind, thus ending up with an incomplete orbit. Last but not least, there’s the 360 spin feature that does exactly what it says. Again, you have to tell it to stop spinning. Check out what I got out of these in the above sample video reel.

Even after playing with the Passport for several weeks, I continue to be impressed by how capable and unique this drone is. It’s essentially your personal travel cameraman, except you won’t have to buy an extra plane ticket for it. Better yet, Zero Zero Robotics has already delivered a couple of firmware updates to improve the Passport’s video quality plus body tracking performance, and it’ll continue to do so in the many days to come. But, due to its form factor, little can be done about the drone’s weak resistance against even moderate wind — either avoid the breeze or spend an extra $400 on the Mavic Pro if you want to avoid the hassle.