How humans and machines can work together to save the tuna

From sashimi to tartare, tuna is in demand year-round. More than half of the world’s high-grade fish supply comes from the central and western Pacific Ocean, a region that accounts for a $7 billion market. The popularity of tuna sustains small fishing communities in distant places like Palau. But it also threatens an aquatic population that has been dwindling at an alarming rate.

Over the past few years, unregulated fishing practices in tuna-rich Pacific regions have threatened to wipe out rich species like the bluefin and bigeye. The ecological disturbance has raised a red flag among conservationists who are now looking to artificial intelligence for a solution to keep Palauan fisheries in check.

A majority of the 20,000 people in the island country of Palau rely on marine life for their livelihoods. The economy of the nation, which is spread across 250 islands in the Western Pacific Ocean, depends on tuna fishing and deep-diving tourism. The latter, driven by the shark population, accounts for the country’s $85 million deep-sea tourism industry. That breaks down to $170,000 per year for every alive shark, which is why the country enforced a ban on shark fishing in 2009 to build a sanctuary for divers. Even so, sharks and turtles are often unintentionally, even illegally, hauled in as bycatch on longline fishing boats. 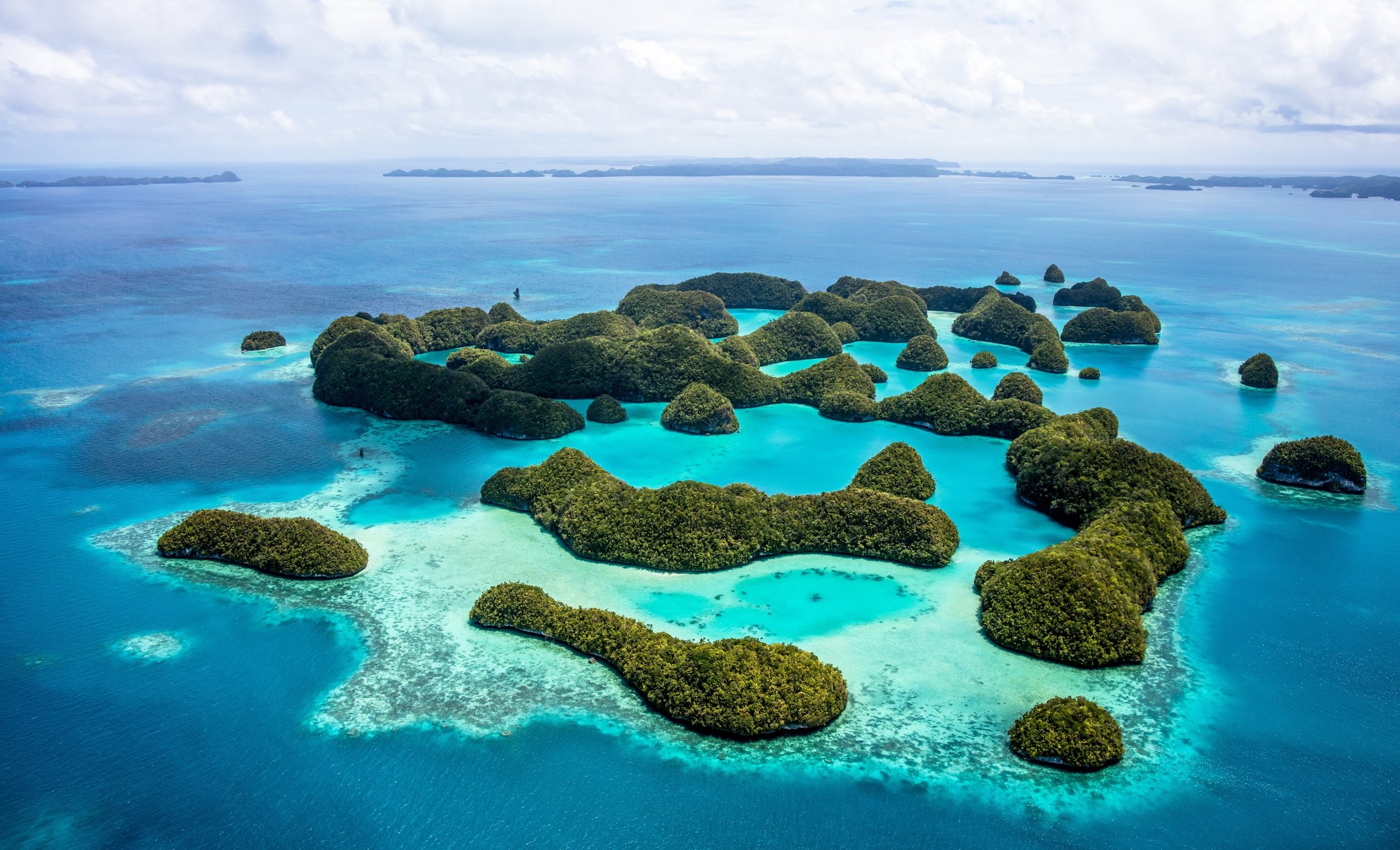 In 2014, the Palauan government took more aggressive measures to protect the rich but vulnerable marine life. It announced a revolutionary ban on export fishing across its territorial waters — 200 nautical miles of the ocean surrounding the cluster of islands. And while local fisheries were allowed to operate, it became mandatory to have observers on board every tuna longliner. The new regulation was intended to keep overfishing and poaching in check. It would make vessel operators accountable for their catch, but the high costs of dedicating a person to every ship has kept the law from being fully implemented. A staggering 98 percent of the longline vessels continue to operate without any oversight in the region.

Palau’s longline tuna fishery is small in comparison with others in the Pacific. But it boasts of some of the most coveted fish species in the world. As such it plays a significant role in the ecological system and economic stability of Palau. To maintain that delicate balance, The Nature Conservancy, a global nonprofit organization, funds scientific research and provides technological solutions that can help establish a sustainable fishing model for the country.

In February of this year, the environmental organization bought fishing rights for a year in the Pacific region to test practices that would reduce bycatch. The Conservancy also launched a pilot project that has now equipped 24 boats with cameras and GPS devices to electronically monitor the fishing activities. The data fills in crucial gaps in knowledge about the catch on the boats and it supports the work of the human observers who can review the footage from multiple trips without being out at sea for months on end.

“We didn’t know what was happening in our waters,” says Kalei Luii, a compliance officer for the Division of Oceanic Fisheries Management in Palau, who works with the observers. “Bigeye tuna is our most prized fish, and their numbers were going down. [This] technology is helping us efficiently and sustainably manage our tuna fishery.” 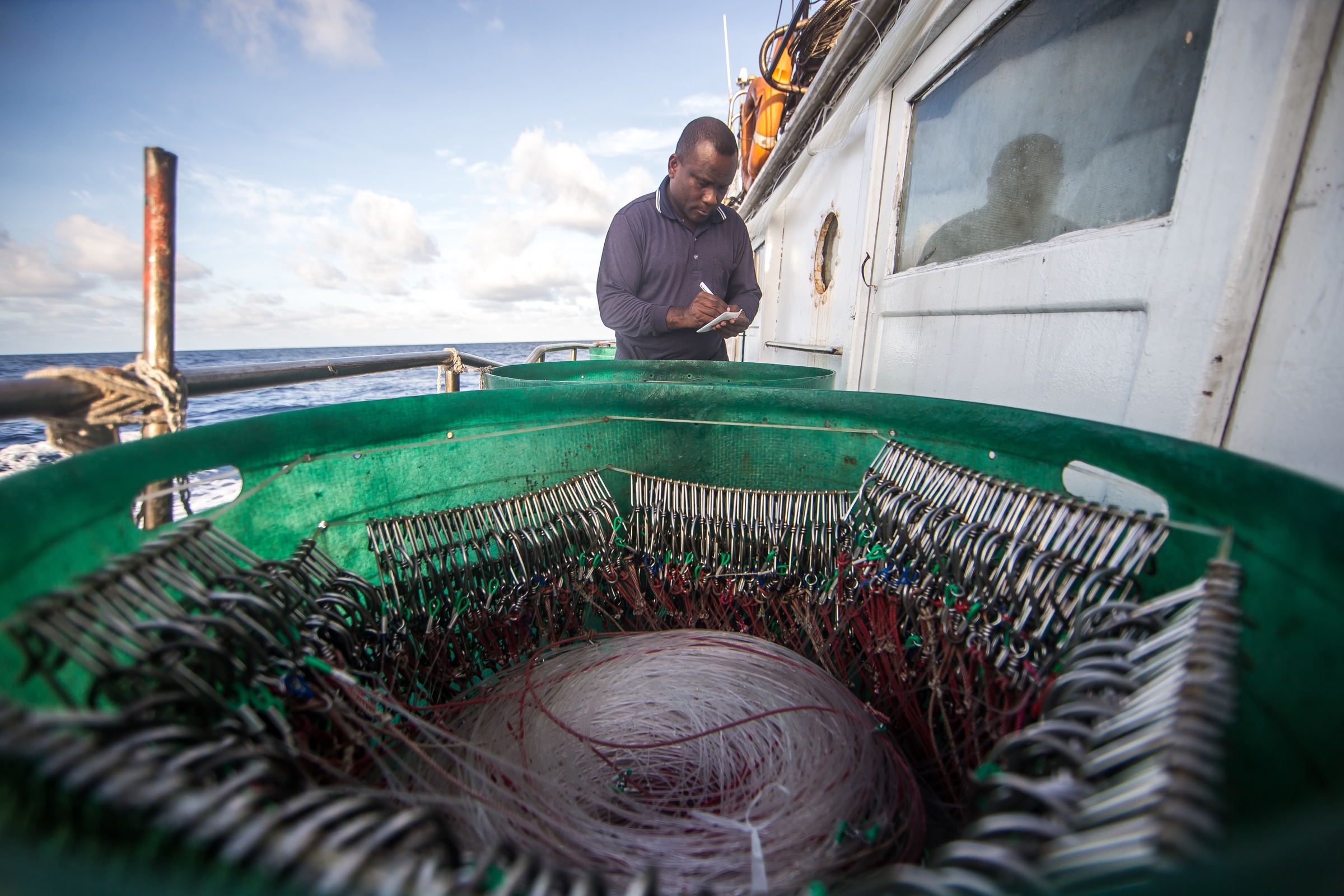 An observer on a longline fishing boat in Palau. Photo: Jonne Roriz, The Nature Conservancy.

While the data allows more coverage across Palau’s tuna fishery, the process is incredibly time-consuming and expensive. Usually, an observer painstakingly watches hours of raw footage, sometimes hundreds of hours, to find any discrepancies and bad players. To make this manual review a lot less tedious, the Conservancy is now looking to machine learning for a scalable solution.

The organization has launched a search for the best AI solution through a contest with Kaggle, a startup that has a wide network of data scientists who partake in machine learning competitions. Over the next four months, the participating teams will have access to hours of fishing footage, allowing them to develop algorithms for Palau’s tuna fishery. Similar to facial recognition techniques employed at companies like Facebook to tag friends in a picture, the winning algorithm will teach machines to tell the difference between a tuna and a shark.

“I’m not trying to invent the future,” Matt Merrifield, chief technology officer at the Nature Conservancy in California, said in a recent announcement. “This technology exists, but it isn’t typically applied to conservation problems. This will be the first application of machine learning and artificial intelligence on board a fishing boat.” At the end of the contest, next year, the winning algorithm will be applied to all the boats with electronic monitoring systems in the Pacific.

The idea behind monitoring Palau’s fishery, through a combination of raw footage and algorithms, is to hold the fishermen accountable. “We want to stop illegal, unreported and unregulated fishing that is causing our tuna stocks to crash,” Luii said via email. “[It is] killing our vulnerable species like sharks and turtles and robbing our economy and those of other Pacific island nations.”

Luii doesn’t go out to sea, but he relies on the technologies that are being brought into the sustainable model. While he has not worked with the algorithms just yet, he is well acquainted with the data that comes in. He collects the hard drives at the end of a trip and works with the observers to review the footage. He says he was first drawn to the project because of his interest in the technology, but he continues to work with it because it aids his work.

“It complements the existing but lacking longline observer program here in Palau,” he says. “I’ve gained more understanding about how these longline vessels operate, and now [we’re] able to verify whether or not they comply with our laws at sea.”

The Nature Conservancy claims that the system, even when it will be loaded with machine learning algorithms next year, is not designed to do away with human observers. Instead, it’s expected to take away some of the drudge from their jobs. While that tends to be a common pro-AI argument, the people on the ground seem to agree with the sentiment in this case.

“I’m proud to be contributing to the sustainable management of my people’s resources,” says Luii. “My motivation is to help the people of Palau and make sure this fishery is thriving for future generations.”