Mark Zuckerberg said it’s unlikely that the small amount of fake stories circulating on Facebook affected the outcome of the presidential elections. According to Buzzfeed News’ investigation, though, that “small amount” of hoaxes outperformed (Google Doc) stories from legit sources on the social network during the final three months of the campaign period. The top 20 fake stories from August to election day apparently generated 8,711,000 shares, reactions, and comments on Facebook, whereas the top 20 from 19 mainstream news websites only generated 7,367,000.

Before that period, mainstream sources generated up to four times the engagement fake sources did. It’s not exactly clear what caused the shift, but it’s worth noting that in the end of June this year, Facebook updated its News Feed algorithm to prioritize the updates your friends share over posts from other sources.

Buzzfeed says 17 of the 20 top-performing hoaxes were overtly pro-Trump or anti-Clinton. That supports earlier reports that Facebook didn’t address its fake news problem, because it would’ve removed a lot of conservative content from people’s Feeds. Three of the top five hoaxes, for instance, claim that the Pope endorsed the President-Elect, that Hillary Clinton sold weapons to ISIS and that the FBI agent suspected of leaking Clinton’s emails was found dead.

There were a handful of fake anti-Trump stories that made the rounds, including one that claims Mike Pence called Michelle Obama the “most vulgar first lady we’ve ever had.” But Buzzfeed found that most of the fake content in the list ultimately came from hoax websites or from hyperpartisan right-wing publishers. Some of those publishers even registered their domains merely a few months before the elections. 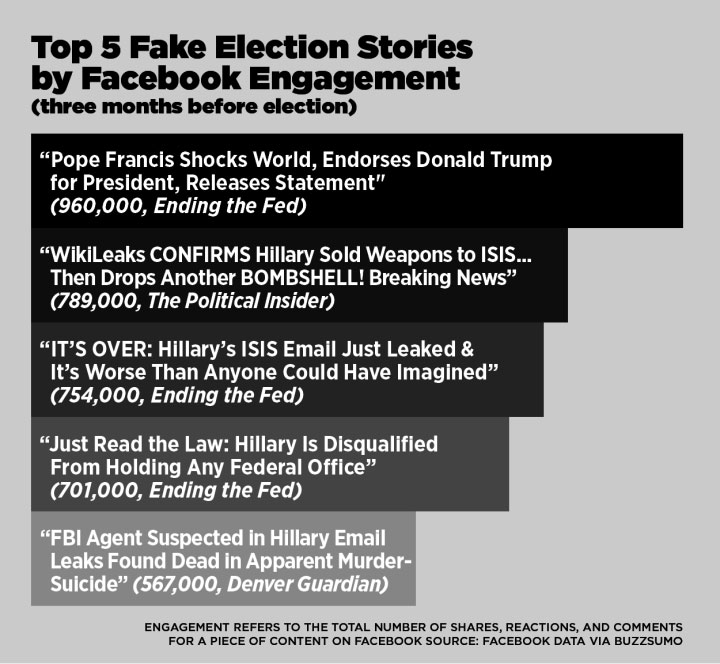 As Buzzfeed noted, though, Facebook likes, shares and comments don’t necessarily translate into traffic. A spokesperson for the social network also told the publication that these 20 fake stories are but a small fraction of everything that’s shared on the website. It doesn’t necessarily represent the Facebook activity of all the election-related posts, whether fake or real, shared on the social network. “There is a long tail of stories on Facebook,” he said. “It may seem like the top stories get a lot of traction, but they represent a tiny fraction of the total.” Still, there are dozens of employees within the company who feel like Facebook didn’t do enough to prevent fake news from spreading. They’re now reportedly investigating the situation from within.