This post was done in partnership with The Wirecutter, a buyer’s guide to the best technology. When readers choose to buy The Wirecutter’s independently chosen editorial picks, they may earn affiliate commissions that support its work. Read the full article here.

After spending 37 hours researching 22 4K monitors and testing eight finalists, we’ve found that the Dell P2715Q is the best 4K monitor for most people right now. Recent improvements in technology and drops in pricing make a 4K monitor a good buy if you’re willing to live with some quirks, but it still isn’t something most people need. If you work with (or watch) a lot of high-definition content, have an amazing gaming computer, or just want more desktop space, you’ll be happy with the Dell, or any of our other picks. 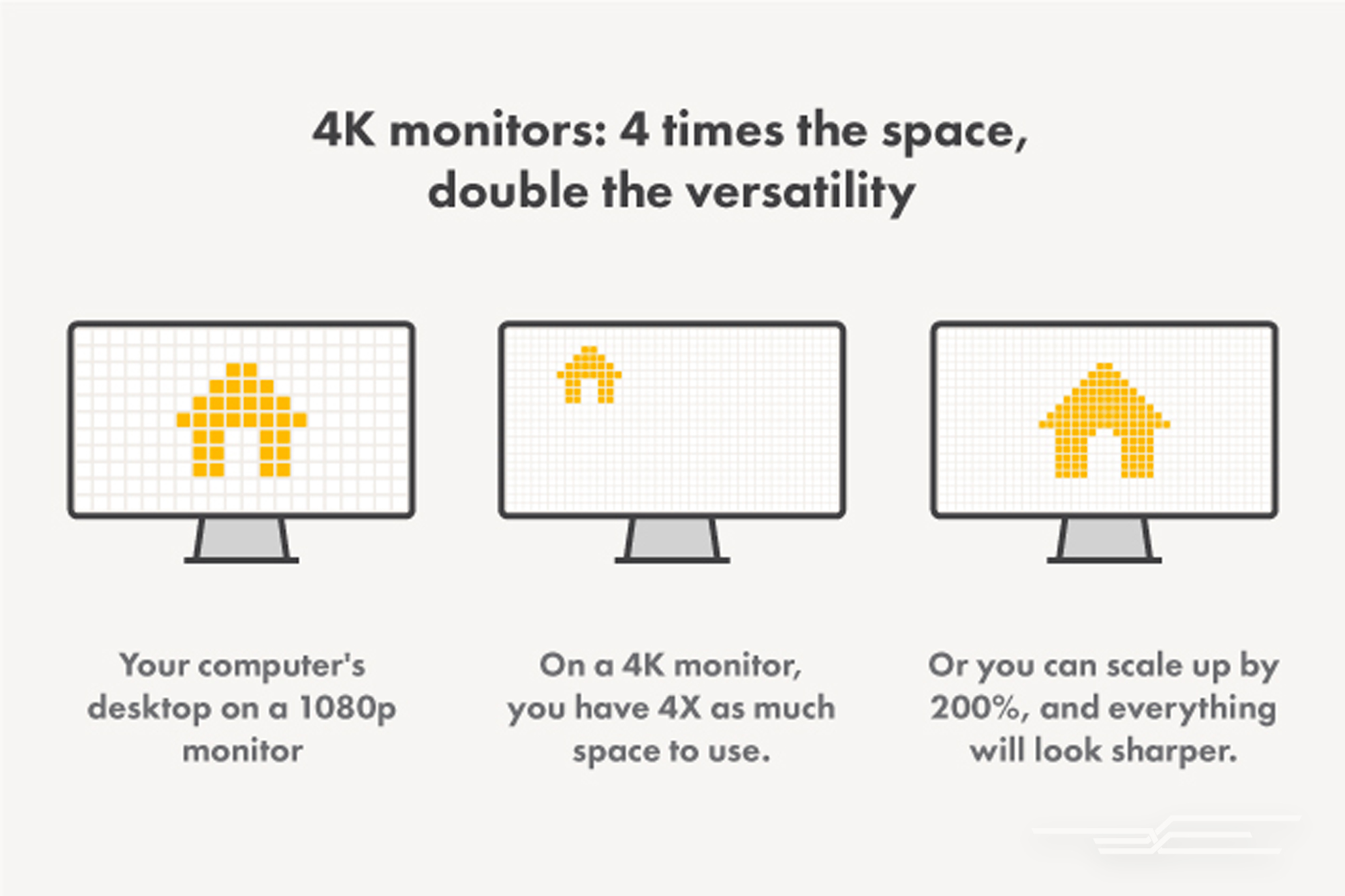 A high-resolution display such as a 4K monitor can make text and images look much sharper than a standard monitor. Photo: David Murphy

That increased pixel density produces sharper, more detailed images, as you’ll see in our illustration above. A 4K monitor can give you a better-looking picture for games, the ability to edit high-res photos and videos at their native resolutions, and a lot more desktop space—useful if you’re a coder or you otherwise need a large amount of information on one screen.

Higher picture quality and more screen space can make 4K monitors look like an obvious upgrade, but they come with potential drawbacks that some people will find annoying and others will hate. To learn more, check out our full guide. 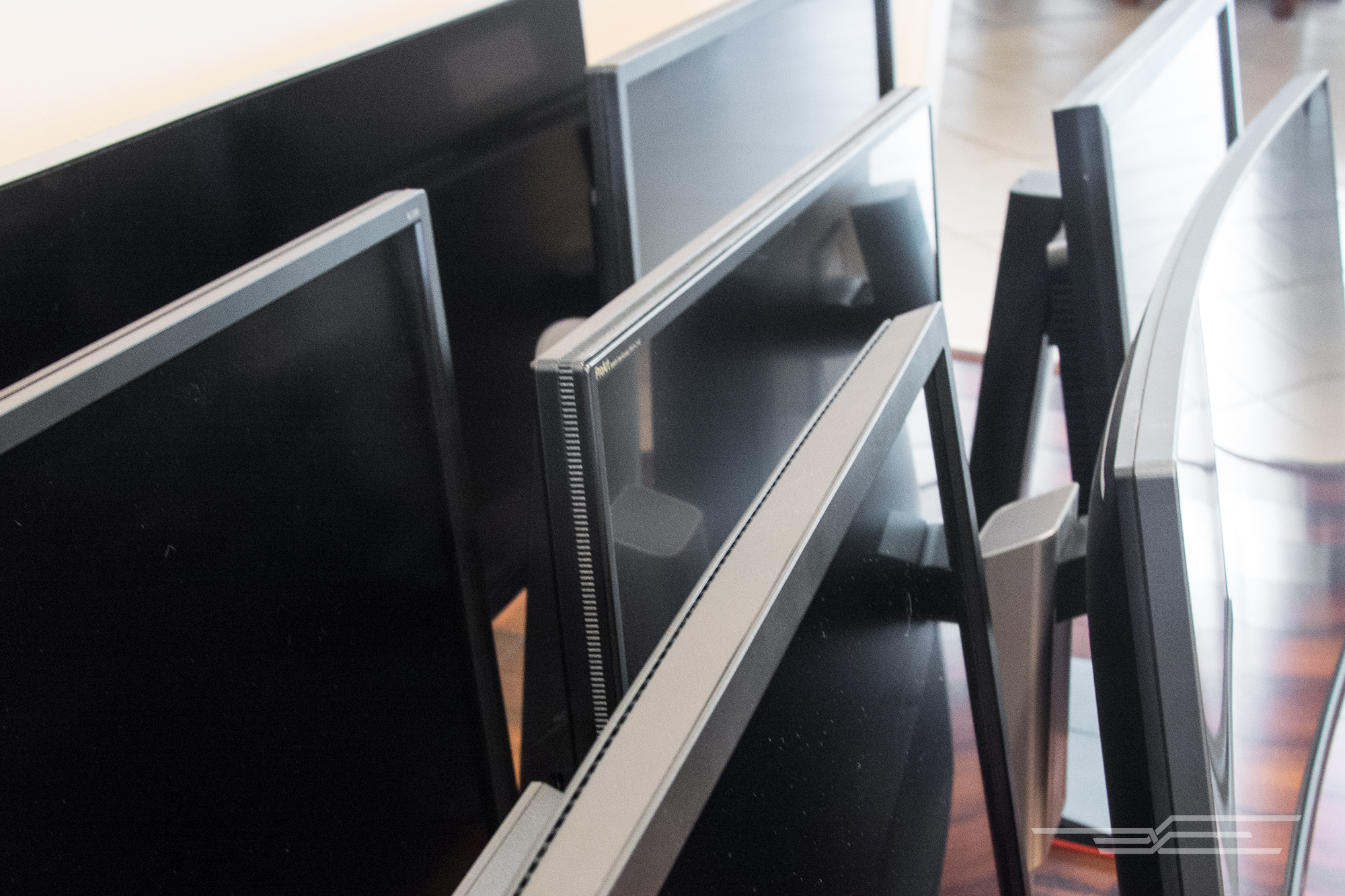 We narrowed our list of the best-reviewed and highly ranked IPS monitors down to eight by eliminating those that weren’t manufacturer-calibrated, were way too expensive for their specifications, or were using DisplayPort’s multi-stream transport mode (MST) instead of single-stream transport (SST). MST was an older stopgap measure that treated a monitor as two separate displays in order to get a 4K picture working over older versions of DisplayPort. You should avoid any monitor that isn’t SST, though you might have to do some Internet detective work to confirm whether a monitor uses it.

The Wirecutter’s Chris Heinonen helped us design our monitor-testing process, which relies on two measuring devices: a $1,200 i1Pro 2 spectrophotometer from X-Rite and a $170 Spyder4Pro. (The Spyder4Pro is better at reading black levels than the i1Pro.) We built customized tests in the CalMAN 2016 software-calibration suite to measure each monitor’s maximum and minimum brightness levels, gamma, color temperature, and color accuracy. 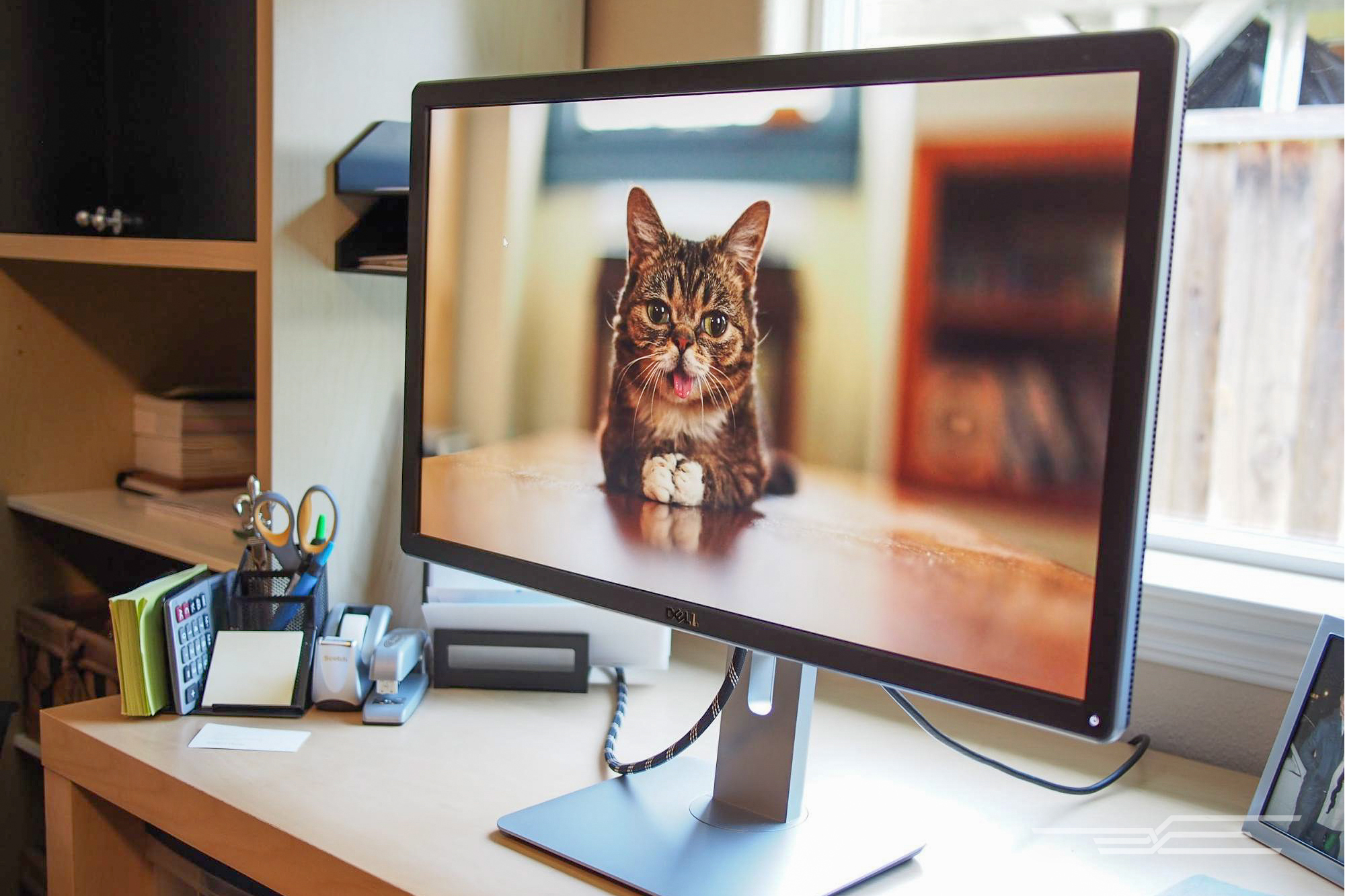 The P2715Q has an old-school fat plastic bezel and traditional plastic buttons rather than the ultraslim bezel and capacitive buttons of Dell’s UltraSharp line. Photo: David Murphy

The Dell P2715Q is the best 4K monitor for most people because its display quality is exceptional, its price is reasonable, it has all the connections you’ll need for your PC (and USB devices); it comes with a highly adjustable ergonomic stand and VESA mounting holes; and it uses single-stream transport for its DisplayPort connection—much better than cheaper (or older) multi-stream transport monitors.

The P2715Q doesn’t carry Dell’s UltraSharp branding, but the company calibrates the monitor at the factory. Because the calibration applies to the monitor’s default mode, you’ll get great results when you first set up the monitor. (You should still optimize the monitor’s brightness and contrast for your room’s lighting.)

The monitor’s DeltaE values—representing how far away a displayed color is from what it should actually be—ranged from 1.114 on our saturations test to 1.224 on our ColorChecker test to 1.493 on our grayscale test. In real-world terms, the P2715Q’s colors are almost perfect. Though the calibration software found that some displayed reds appeared oversaturated and the monitor had some hue/tint inaccuracies, they’re not perceptible. For more on grayscales and color temperature, see our full guide.

There’s little we don’t like about Dell’s P2715Q. Previous purchasers have reported that the monitor doesn’t always work, or work well, with various MacBooks. Given how many different kinds of MacBooks exist, how many different ways people have tried to connect the monitor to their laptops, and how many different versions of MacOS people are using, we haven’t found a one-size-fits-all solution for some of the reported issues, so we recommend checking to confirm that your MacBook can even run 4K at 60 Hz.

Runner-up (with extra features for gamers) 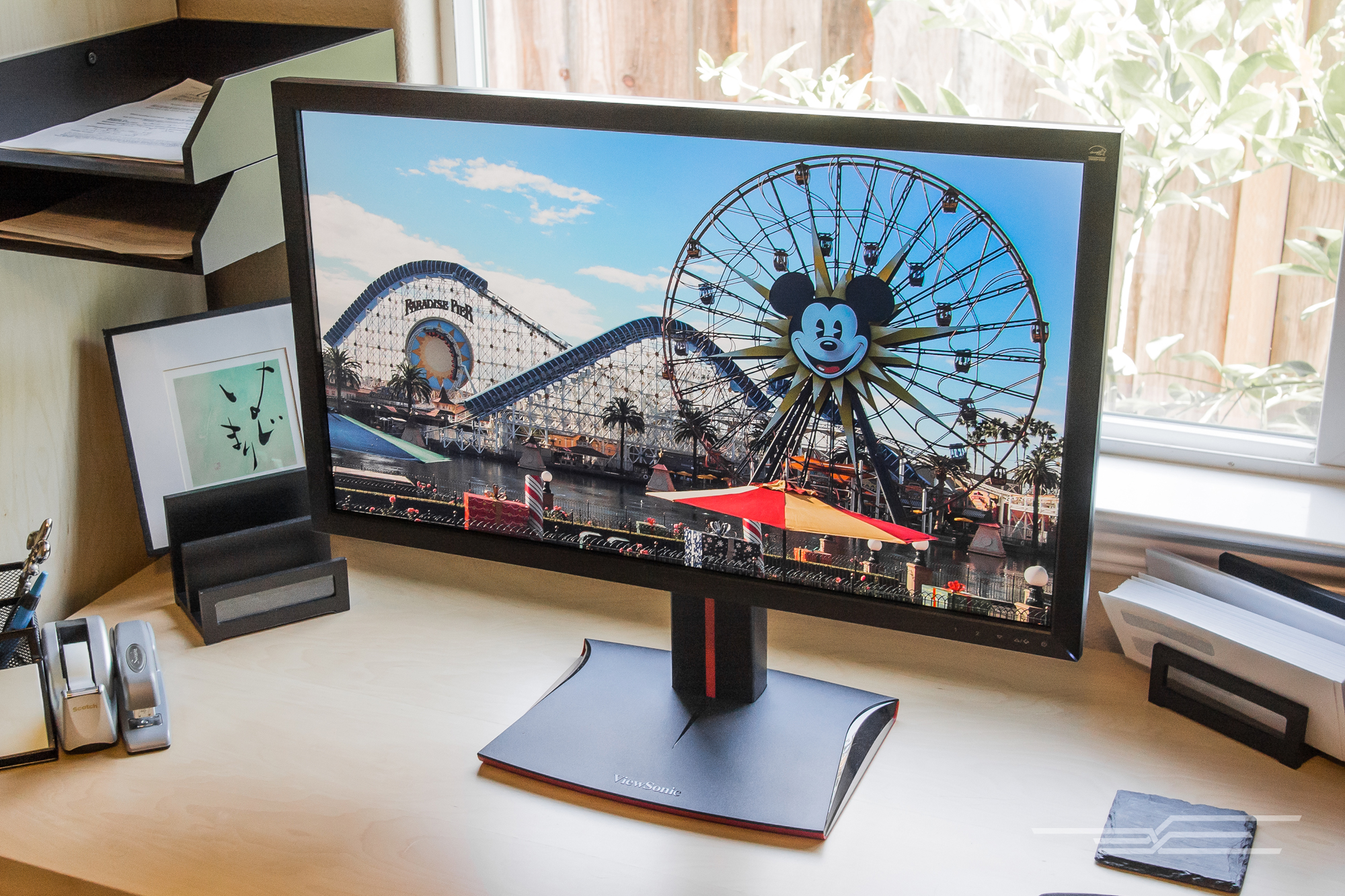 The XG2700-4K is an excellent alternative to the Dell P2715Q. Photo: David Murphy

The ViewSonic XG2700-4K isn’t just a runner-up; it’s an excellent alternative to the Dell P2715Q if you’re a gamer or a power user and you like digging into your monitor’s features. It offers accurate colors, excellent stand adjustability, an even better array of connections, and FreeSync (for AMD gamers). It also has far more configuration options than the Dell, though they’re not explained very well, which is our biggest complaint with this monitor. But the Dell P2715Q is a lot more user-friendly (and currently cheaper), which is why that model gets our recommendation.

In our CalMAN 2016 testing, the XG2700-4K had a slightly better grayscale DeltaE than the Dell P2715Q (0.9428 versus 1.493). The same held true for our saturations test (0.5073 versus 1.078) and our ColorChecker test (0.7491 versus 1.224). In reality, all of those values indicate excellent display quality for most people—you can’t tell whether one monitor is more accurate than the other without a calibration device.

We especially love the XG2700-4K’s robust multipicture mode, which lets you use one monitor to view multiple connected sources at once (either in a split screen, a quad-window display, or picture-in-picture). 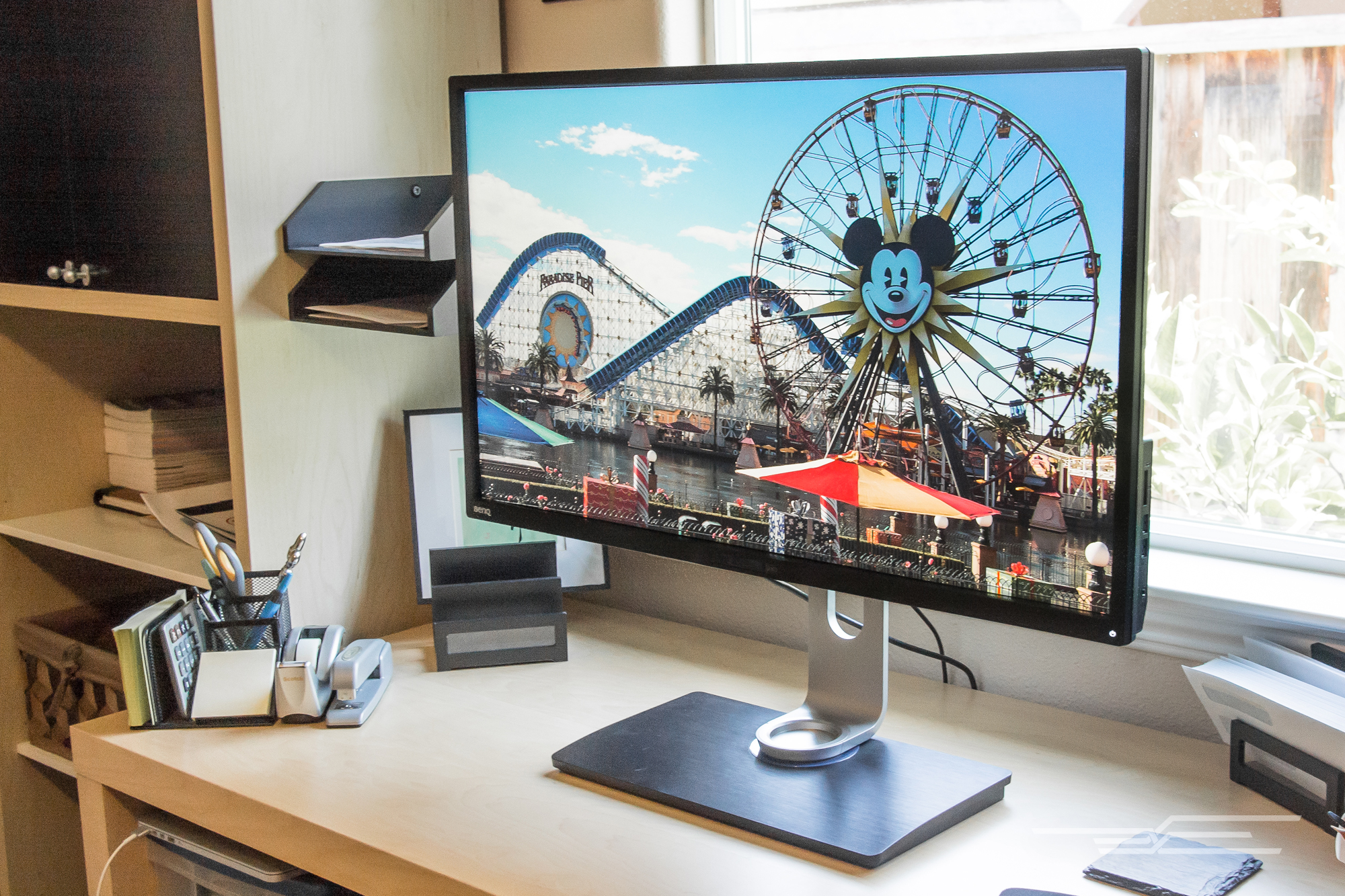 The BenQ BL3201PH is gigantic, but it lets you avoid dealing with unpredictable scaling issues if you rely on third-party apps. Photo: David Murphy

The BenQ BL3201PH is a beast. It’s the best 4K monitor you can buy if you have room on your desk for its 32-inch screen. The biggest benefit of a giant 4K monitor is that you might not need to scale your display when running the monitor at its native resolution. That way, you’ll avoid one of the main issues plaguing 4K—third-party apps that look ugly, blurry, or too tiny to use when Windows embiggens your on-screen items.

Of all the large 4K monitors we looked at, the BL3201PH offers the best combination of price and performance, plenty of connectivity, all the right ergonomic adjustments, and a good assortment of features in an easy-to-navigate configuration screen.

Dell’s factory calibration for the P2715Q’s Standard mode is very accurate, so you don’t need to buy a hardware colorimeter to calibrate your display unless you need absolute perfection (as professional photographers, graphic designers, or video editors do). You can (and should) adjust the monitor’s contrast: Go to Lagom.nl’s white-saturation test and set your contrast at the highest it will go before you can’t see the difference between the higher-numbered values and the all-white background.

If your monitor’s screen gets dirty or smudgy, don’t use an ammonia- or alcohol-based cleaner on it (no Windex). Don’t use a paper towel, either. A microfiber cloth and some distilled water (not tap) will work just fine. And don’t spray the screen when cleaning it—spray the cloth, then wipe the screen.