Japan has some exclusive PSVR titles, but you’re not missing much

Sony’s lineup of games and demos is often slightly different depending on the region. It’s something you may have noticed with PlayStation’s VR debut in both Europe and the US, — and that’s even more true for Japan. The virtual reality headset launched in Sony’s homeland with several titles on the PlayStation Store that are not available elsewhere. While standalone (much less stand-out) games are few, there’s still handful of experiences that are only playable with a Japanese PlayStation account. Fortunately for you, I’ve got one, and have played through some of this Japan-only content. From awkward teacher role-play with a Japanese schoolgirl, to anime J-Pop idol concerts, digitized musicians, Godzilla and virtual karaoke rooms (!), these regional exclusives very much cater to the locals. Here’s how they fared over a week-long playthrough. (Factoring in some time for Rez Infinite, of course.)

Summer Lesson is the most polished — and the weirdest — PlayStation VR game you can’t buy outside Japan. You play as a tutor hired to help Japanese high school student Hikari improve her grades. So far, so anime plotline. In reality, it’s not much of a game — more like one of the dullest PSVR experiences I’ve seen yet. The gameplay consists of choosing a lesson (logic, memory, etc.) and conversation starter (family, school, sports) with Hikari, listen through greetings and some small talk, rubberstamp a lesson report card (one of the rare in-game interactions) and wait for scenes to fade in and out. (It’s fortunate, perhaps, that you don’t have to actually sit through the multi-hour lessons.)

In the middle of study, the game lets you improve (or lower) the odds of a successful lesson by changing the learning environment. However, irrespective of what you choose to do during her lesson (vocally cheer her on, introducing a rapid-fire quiz, lowering the air-con, or even turning the lights off), it has no bearing on what you see in the next scene.

Marginally more interesting scenes are randomly drip-fed in throughout this daily grind. But even these hidden scenes aren’t exactly thrilling when written: You share headphones while listening to music, she drops her pencil, she searches for her favorite comic book or brushes some virtual fluff from your virtual shoulder. Then, after six lessons, you meet her one last time to hear the results of her midterm. This depends on how smart your lesson plans were, although it’s hard to see the reasoning behind what makes a lesson successful or not.

After the eventual test result, you can repeat the whole thing again, this time armed with leveled-up lesson plans… even if the timeline is reset each time. She doesn’t remember you. She never will. She’ll tell you again and again that it’s weird to have a home tutor in her room, and that she loves softball. She always eats breakfast, loves manga comics. Oh, and she still really, really loves softball.

If there’s one redeeming feature here, it’s that you feel like Hikari is in the room; that you should obey social conventions (get too close and she will complain). When she gets a bit too close, you feel uncomfortable. But she’s not there. She’s inside the game. I have never felt that with typical video games. This is a sensation produced by VR.

The creep factor persists: Meet your weekly in-game targets and you’ll be rewarded with new costumes for your student. But for now, that’s about it . The game heavily hints at future content: At the Tokyo Game Show last year, Bandai Namco showed an English-language demo with a new caucasian student. As Summer Lesson stands, it’s an expensive mini-game that made me feel uneasy. Nonetheless, it speaks to the ability of virtual reality to convey human presence. 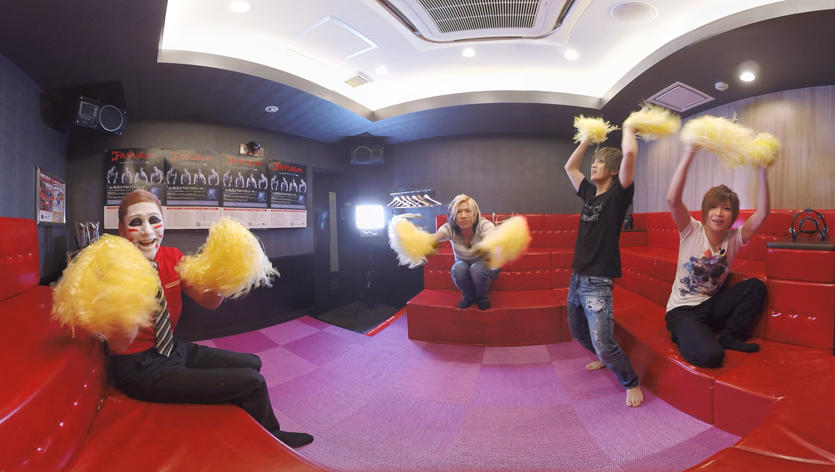 “The ultimate solo karaoke experience.” That’s the pitch, even if not everyone enjoys singing to their television, alone. Inside a VR headset. The experience adds cheesy, 360-degree video to your songs of choice. The lyrics run across the bottom of your virtual view, like any TV-based karaoke unit. (In fact, the company Joysound powers millions of karaoke bars across Japan.)

The videos are just as cloying and weird as the two-dimensional ones that we karaoke addicts are used to. There’s a cherry blossom picnic with the girls, a cat cafe (yesssss), picnic at the beach, an intimate music lesson setting and… a room full of handsome butlers. Those are your options, folks. At least for now. The karaoke app has already started to add a number of artist collaborations to flesh out the experience.

Japanese Visual-kei band “Golden Bombers” are one of the first artists to collaborate, offering two special edition 360-videos with two tracks. This includes possibly the most reality-blurring experience: singing said band’s song while the band itself cheers you on inside a 360-projected karaoke room. The second “experience” puts you on stage during a live concert, replete with cheering crowd. That’s pretty cool.

But back to the stock cat cafe/ picnic experiences: They aren’t limited to Japanese-language songs, so I was able to bust out half a rendition of “Under Pressure” before collapsing out of sheer shame. More concert-based content would totally work with VR and karaoke. Hopefully Joysound and Sony are on it.

Combining the creepy schoolgirl component with the melodrama of a karaoke video, 360 Date is a short drama that tells the story of your walk home with a childhood friend who might be in love with you. (Spoiler: She is.) It’s a harmless, 360-degree mini-drama. The app suggests there will be further installments with different girls and different situations, but for now 360 Date consists of several scenes of your friend talking to you, with fade-out cuts between locations.

Your character manages a few one-word replies through the episode but it’s a borderline monologue. I didn’t have to touch the controller. I just watched. I didn’t want (or need to) play it twice. Because of the relatively low standard of acting (the poor girl is acting alongside a pole and a 360-degree camera), and the fact you can’t move around, the computer generated schoolgirl in Summer Lesson offered a greater VR sensation, more of a presence, than this human one. What’s happening to me?

Sony collaborated with Godzilla studio Toho to make this very short VR teaser for the new feature film. You wake up to find Tokyo in flames, with Godzilla still terrorizing its residents. There’s no interaction — you just see the full computer-generated Godzilla shrug off the military attacks. (Fun fact: This Godzilla was built from the same model used in the latest movie.) It then somehow notices you, a lone human lying on the ground, and ambles over to you. Rocket launches, gunfire and crushed cars ensue. The demo finished even sooner than I thought it would — but at least it’s free?

“Rhythm action game!”, I thought. “Cute anime characters that I dance along with, and look like an idiot!” I thought. Sure, that last part is true, but neither rhythm nor action are necessary — and again, it’s not really a game. Idolmaster virtually places you in the crowd while a fictional 3D anime J-Pop group sing/synth their way through a song. There’s more songs through DLC — I didn’t bite — and DLC accessories go as low as virtual glow sticks and wristbands for your audience member. Both are a con priced at three dollars each.

Read more from News
Gaming, News, PS4, Sony
← Sony’s PlayStation TV service comes to Mac and PC browsers
CES 2017: What is it and what to expect →