The Huawei Fit feels cheaper than its $130 price

It’s almost gift-giving season, and companies are scrambling to release products that will fill your loved ones’ stockings later this year. And plenty of people are considering options for the fitness fiends in their lives. Huawei threw its name in the ring today with the newly unveiled Fit, an activity tracker (with some smartwatch characteristics) that constantly monitors your heart rate. It’s also really thin and light, to the point where it actually feels kind of chintzy. The device costs $129, which is $20 less than the Fitbit Charge 2. I’ve spent about two days with a preview unit of the Fit, and so far, I think there are better options on the market.

Don’t get me wrong, there are things I like about the Fit. As a watch purist, I like that it has a round face. I also dig its clean aesthetic. At 11.2mm, its silver-colored aluminum case is thinner than most smartwatches, making it so comfortable that I often forgot it was on my wrist. There are no knobs, dials or buttons, other than a reset button on the underside, which keeps the overall design uncluttered. However, that left me confused as to how to turn on the device when I first unboxed it. As it turns out, I didn’t have to — it’s always on, as long as it’s charged.

I also appreciate how lightweight the Fit is, but although the device feels sturdy overall, it still manages to feel cheap. What’s more, three of my colleagues agreed when I asked for another opinion. That may be due to the watch’s silicone band, which wouldn’t look or feel out of place inside a McDonald’s Happy Meal box. This could be a difference in taste, but it’s worth noting that many people prefer a little heft in a $130 device. 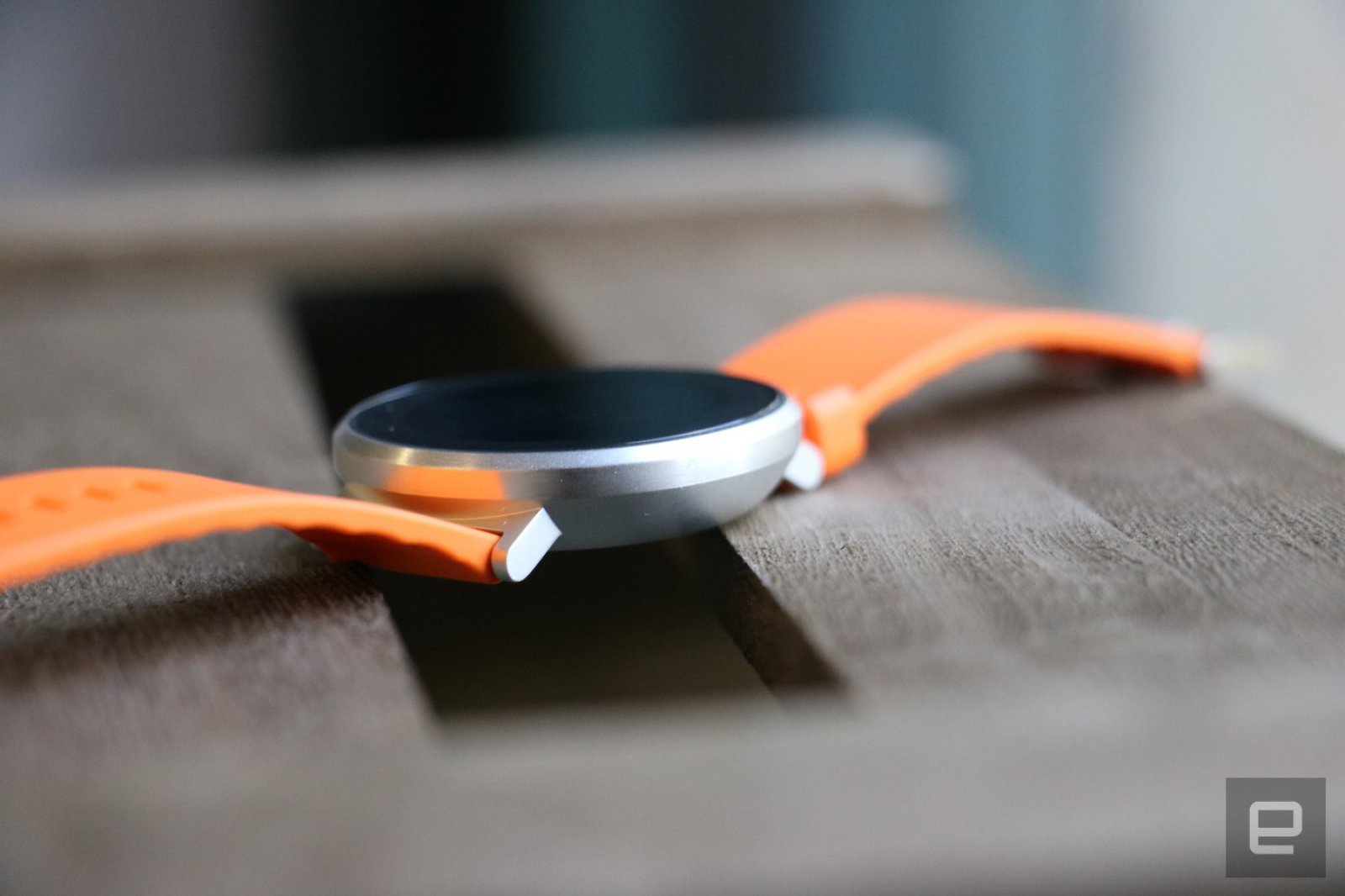 The Fit is available in three band colors. I got an orange one, but my favorite’s the blue. If you’re boring, a black option is also available, although it’ll be a Best Buy exclusive until the end of November. You can also swap in any 18mm watch strap if you’re so inclined.

The Fit’s 1.04-inch, 208×208-pixel LCD touchscreen displays your stats in black and white, and it is easy to read indoors. An ambient light sensor activates the backlight so you can read it in the dark, but it’s harder to make out in strong light. You can’t adjust the brightness either, so there’s no way to tweak visibility in different environments. Another thing that made the display hard to read: It picks up smudges very easily — indeed, smears and fingerprints sometimes obstructed my view.

I like that the Fit constantly shows the time, so that I didn’t have to wait for it to wake up before finding out exactly how late in the day it was. That, together with the fact that the onboard heart rate monitor (HRM) was checking my pulse every 10 minutes, made Huawei’s battery life claim of six days somewhat impressive. That’s similar to the five-day estimate that Fitbit gives for the Charge 2. I’ve only been using the Fit for two days, so I can’t vouch for its endurance, but its indicator suggests the battery is still basically full.

In addition to tracking your pulse, the Fit is capable of quite a few tasks,though they’re all typical for the category. With its onboard accelerometer, gyroscope and HRM, it automatically keeps tabs on your steps, sleep, time elapsed, calories burned, cardio zone and distance traveled (when connected to your phone’s GPS). The new Huawei Wear app for iOS and Android also lets you create customized workout plans to meet goals such as running a 5K, 10K, half marathon or full marathon. The schedule will be beamed to your wrist so you can stay on target without having to pull out your phone.

For those who are interested in activities other than running, Fit also has workout modes for walking and cycling, and will follow your distance, time, fat burning and aerobic performance during those workouts. You can start a session from your wrist or from your phone, if you want to tap its GPS for distance tracking.

The Fit is rated IP68 and 5 ATMs for water resistance, which, in layman’s terms, means it can withstand submersion at up to 50 meters. The goal is to add swim tracking capability to the Fit by 2017, but this feature is not yet live. 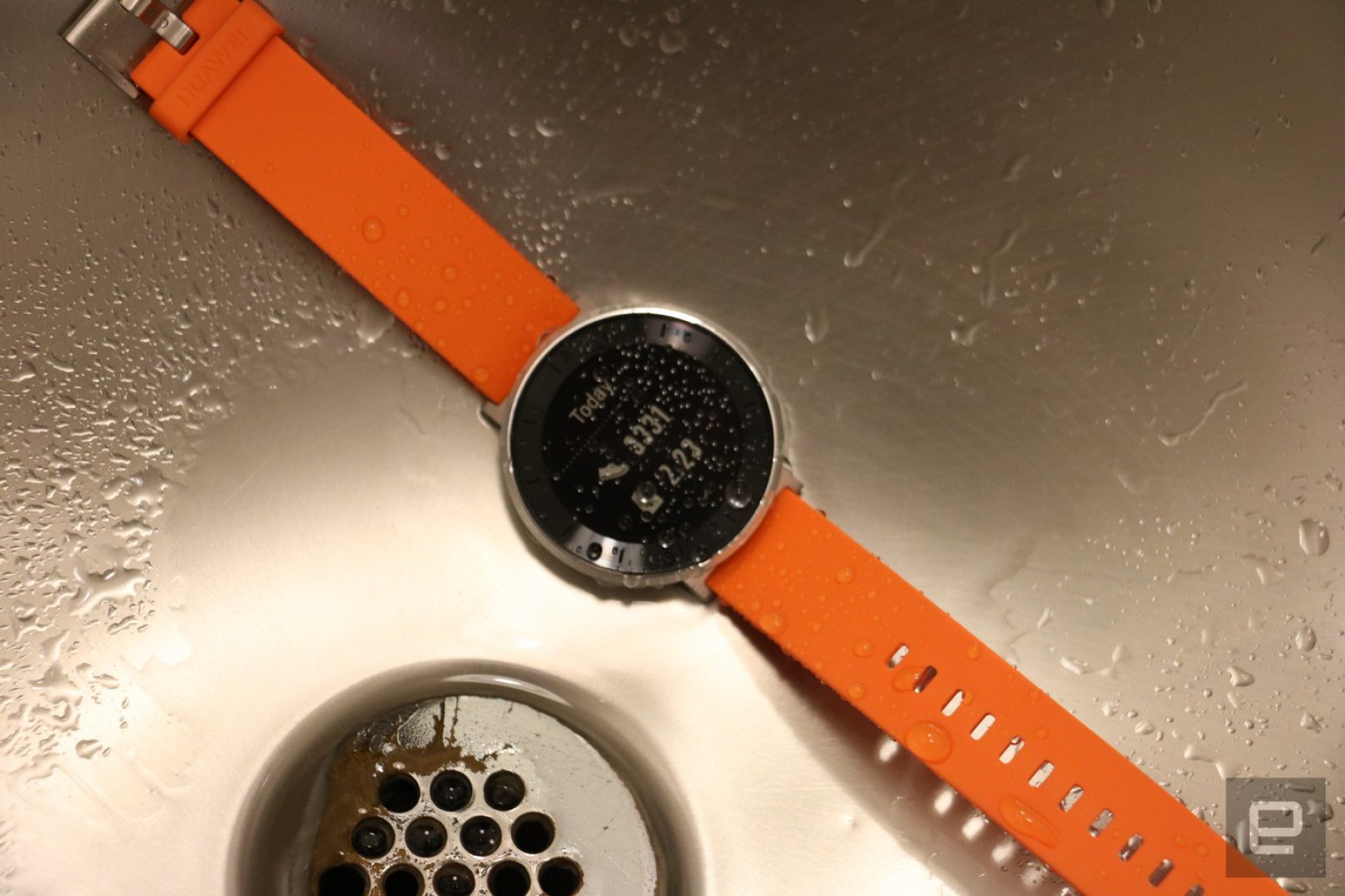 Like many other fitness bands on the market, the Fit will remind you to get up and move if you’ve been idle for 30 minutes or longer. I got an alert in the middle of writing this story, and the watch showed an animated stick figure doing some stretches to prod me into action. (I ignored it because who has time for that?) And just like the rest of its competition, the Fit will buzz to alert you of incoming calls, texts and messages from apps such as WeChat and Facebook. The list of apps that can send notifications to the Fit is short at the moment, but Huawei says it’s working on adding more.

During my time with it, the Fit was slow to read my pulse. I’m used to the Charge 2’s speedy response time, so the relatively long 12 seconds I had to wait for the Fit’s readout probably drove my heart rate way up.

Folks with more patience can probably live with that delay (and the Fit’s other minor shortcomings) in exchange for its relatively low price. For the money, it offers a decent list of features, especially that constant HRM, and a clean design. But $20 is a small price to pay to upgrade to the more-powerful Fitbit Charge 2, which has a better display and faster sensor. Ultimately, the Huawei Fit’s biggest problem is that it simply doesn’t feel like something you’d spend $130 on. Huawei needs to drop the Fit’s price below $100 if it’s going to stand a chance against the competition.

Read more from News
Huawei, News
← Future wearables could use magnetic circuits to self-heal
ICYMI: Photos of wild animals that are far superior to yours →