The first Google Tango phone launches with over 35 new apps

It’s been years in the making but Tango, Google’s depth-sensing tech, is ready to make its consumer debut. That’s because today is when the first-ever Tango phone, the Lenovo Phab2 Pro, goes on sale for $499. To accompany the Phab2 Pro’s launch, Google is announcing over 35 new Tango apps, all of which will be available in the Play Store today. I had a chance to play around with several of them, talked to a few app developers and delved further into the future of Tango, including its relationship with Daydream, that other well-known Google project.

Tango first started life as a project within ATAP, Google’s Advanced Technologies and Projects division. The idea was to integrate an array of sensors and cameras into a mobile device so that it could figure out its position relative to its surroundings. We’ve already seen how Tango’s 3D-mapping can be used to give directions in a museum, assist in home improvement projects and create cartoon worlds, but there are a few new ones that caught my eye.

One of them is Crayola Color Blaster, which is described as a “zombie color-blasting game.” Created by Legacy Games, the object here is to deal with incoming zombies by pelting them with paint. The zombies appear in an augmented reality view on the display, so it looks as if they’re there in your actual living room. It’s a very active game, and I found myself wandering around from one area of the room to the other just to get enough distance between me and the color-hungry undead.

Arielle Lehrer, CEO of Legacy Games, said that there’s also a “horde mode” for smaller spaces, where you’re just pivoting and shooting instead of running around. Lehrer said that the game was originally conceived as juat a coloring book in real space until they figured out there was so much more you could do with the technology. “We started to think about the magic window idea of Tango,” said Andrew Duncan, the game’s lead designer. “Anywhere you look, you change the environment. It really plays in any space.”

Next, I played with Sockethead Games’ Slingshot Island, which is pretty much as the name describes. Again utilizing augmented reality, you place a virtual island in your physical space — be it your dining table or your kitchen floor. From there, you’ll use a slingshot to shoot projectiles at it in order to solve puzzles, like knocking an egg off a structure. The interesting thing here is that instead of swiping down to aim the slingshot, your phone is the controller. That means as soon as you aim your target, you actually move the phone around to establish the shot — as if your entire phone is the slingshot itself. It took a little bit of getting used to, but I learned it eventually.

“This is the one big challenge that we had,” said Randall Eike, the CTO of Sockethead Games. “Users had no concept whatsoever that they can use their phone as a motion controller. It’s completely foreign to them.” After they figure it out though, Eike said, it feels a lot more intuitive. “This motion control ability of using your device and interacting with the object… It’s going to open up this huge class of mobile games.” 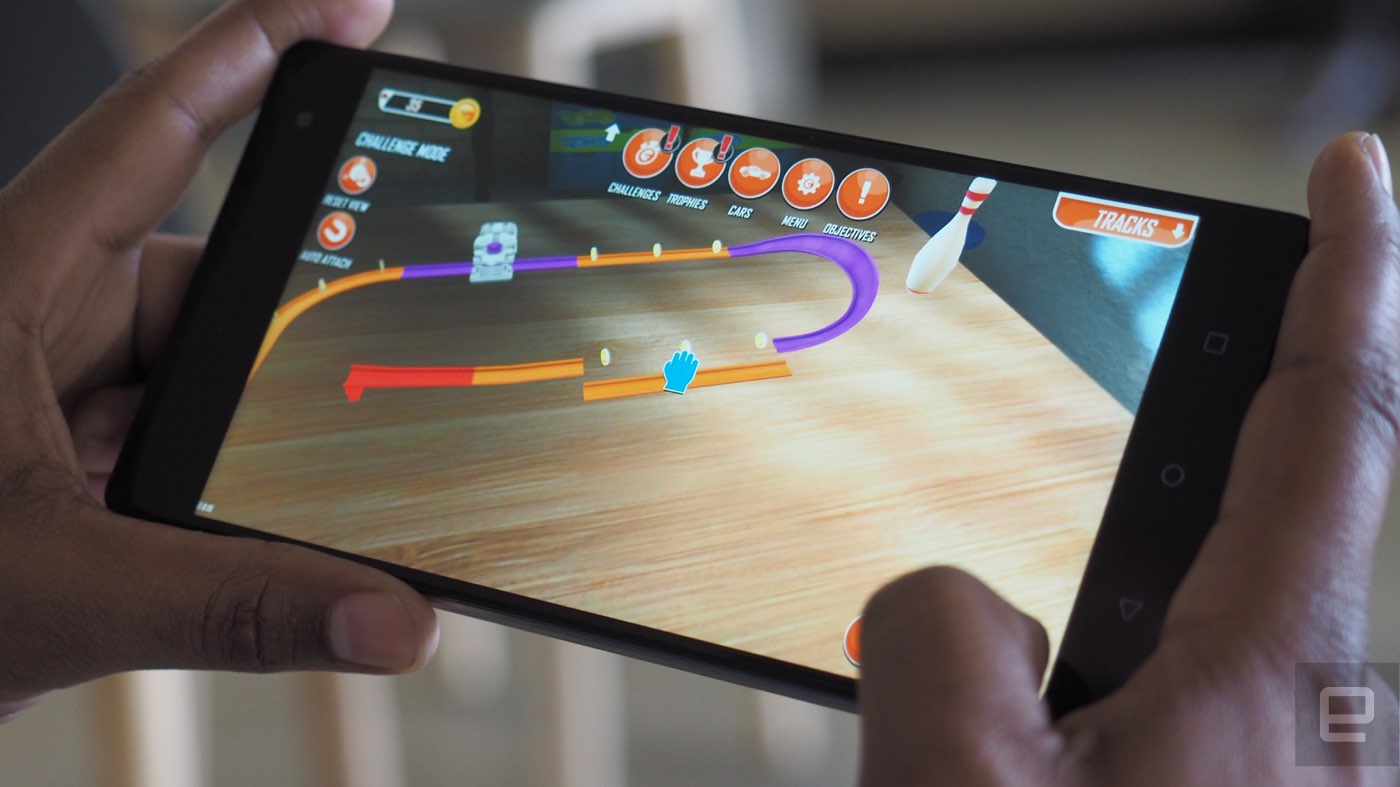 I also played a couple of titles that didn’t use augmented reality. One was Hot Wheels Track Builder, which had me racing toy cars down virtual tracks that I could create myself. You could pick up pieces by grabbing a hand and then move them into place by moving the phone to the right place. It’s once again using the idea of the phone as the controller. “We figured out a control scheme where you wouldn’t need a touch screen to build your tracks,” said Kris Jackson, the lead game designer. “That’s the thing you usually struggle with the most.” Another was Ghostly Mansion, where I collected clues in a virtual room by walking around a physical space. I could lean down to open a drawer or lift the phone up to grab a picture on the wall.

A few years after its debut, Tango then graduated to become its own project division in 2015. Now, it’s a part of Daydream, Google’s VR initiative. It doesn’t take much imagination to think of how useful depth-sensing and 3D-mapping would be in virtual reality. Indeed, the combination of the two could lead to perhaps a standalone headset in the future.

“A lot of the work we’re doing will enable inside out tracking in VR,” said Johnny Lee, Tango’s Director of Engineering. “There’s no product that we can talk about. But as Tango matures, as Daydream matures, there’s an obvious crossroads that we’re excited about.” 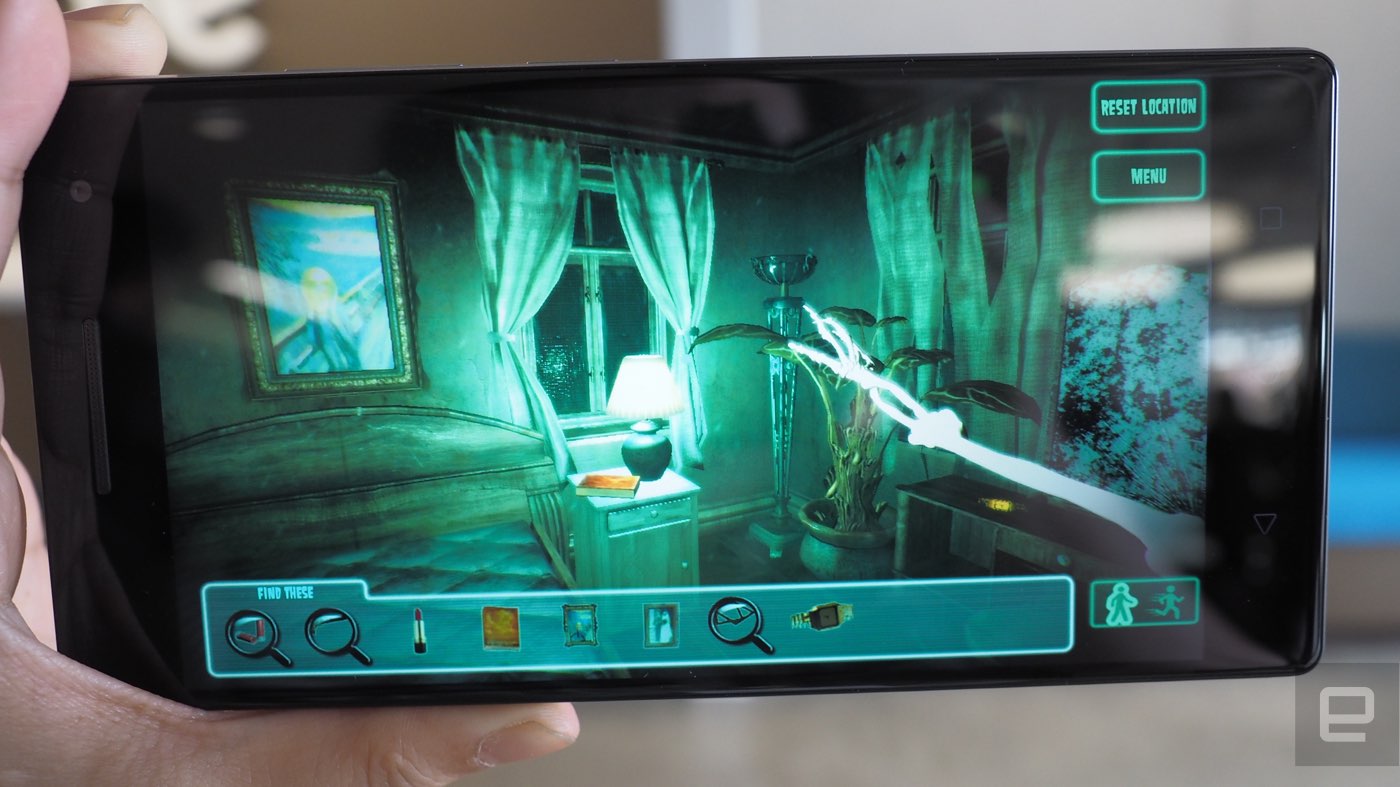 But before integrating that tech into VR, Google thought it was important to incorporate Tango into phones first.

“There are still a lot of phones being manufactured today,” said Lee. “We feel like this form factor is one that we’ll have with us for quite awhile.” Indeed, one of the reasons Eike was drawn to Tango is because he felt that smartphones are a lot more accessible than VR headsets. “A VR headset isn’t something you whip out of your pocket at a Starbucks,” he said, whereas everyone has a smartphone. “There’s a chance [Tango] will be more ubiquitous than VR.”

Lee shares the same sentiment. He thinks of Tango in the same way as GPS; we were able to get through our lives before it came along, but now we can’t imagine our phones without it. The spatial reasoning and depth sensing allowed by Tango, he said, will be just as important. “I believe there is a whole new suite of experiences that are possible. The way we interact with our computers will change.” Plus, he said, the rise of Pokemon Go shows that the public is a lot more accepting of augmented reality apps than it used to be, which is good news for Tango.

Google is so bullish on Tango that it’s already built up a pipeline of partners. In other words, look forward to more Tango-enabled phones next year. According to the company, they’ll come in varying price points, designs and form factors. So if you’re wary of the giant 6.4-inch screen on the Phab2 Pro, maybe wait a few months for a smaller Tango phone.