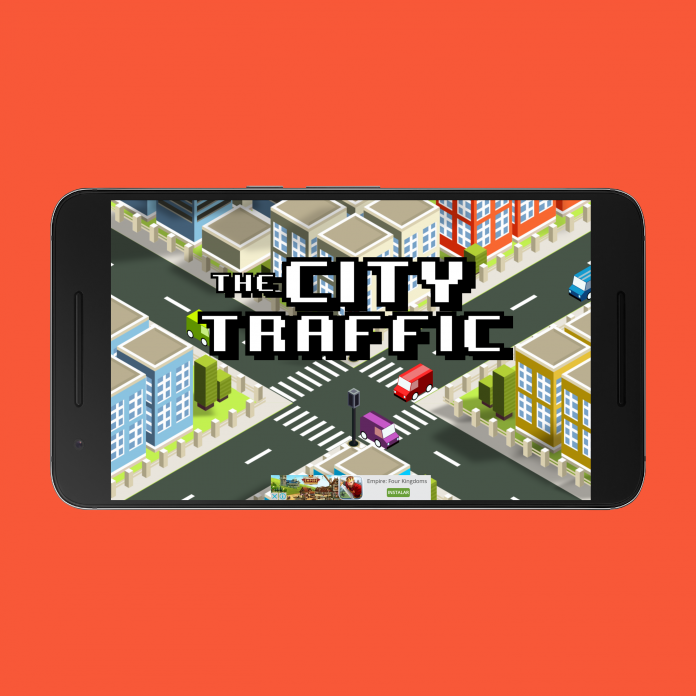 Like it or not, we always have to wait for stuff. We seem to be made to suffer. It’s our lot in life. That’s why it’s always good to have in your phone some games aimed at making your waiting times a bit more fun (or, actually, a bit less annoying). Enter The City Traffic, a game by developer MGDL, which takes one of the biggest inconveniences of our times (traffic) and turns it into a fun game with nice, welcoming graphics and engaging gameplay.

If you’ve ever downloaded a game from the Google Play Store, then you’re probably familiar with The City Traffic’s setup already. Just choose your Google Play Games account and away you go. This will let you upload your high scores to the Play Games platform and compare it with your friends that also have the game installed. Unfortunately, there’s no support for achievements yet.

The game itself is really simple. You are in control of four traffic lights: two for cars and two for pedestrians. The main objective is to dispatch them as fast as you can without triggering an accident (that is, don’t let cars crash either into each other or into pedestrians). Even though the concept is simple, the game can get hectic very fast, and you have to process a lot of stuff swiftly to avoid provoking a mess. Just ask the families of all the pedestrians I’ve killed while playing this. 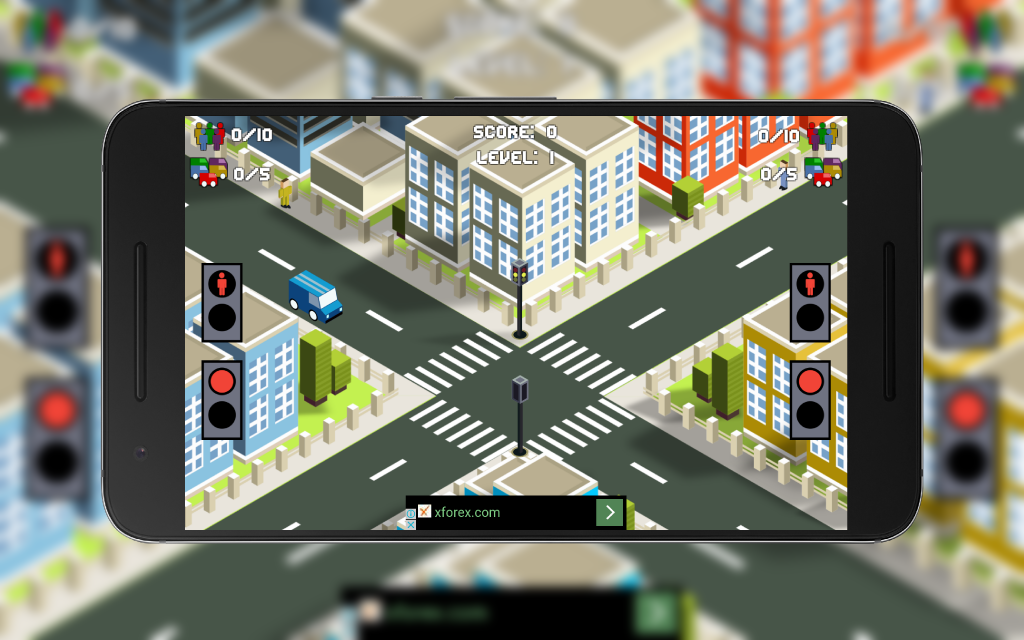 Things wouldn’t be that hard (or interesting) without some kind of factor that keeps putting pressure on you. The catch in The City Traffic is that you can only have five cars piled up in both streets, and ten pedestrians fill up the two busy sidewalks of the city. If you let this limits overflow, it’s instant game over. Sure, when you start playing it’s fairly easy to control the limits, but as you keep going on, cars and people just keep coming at you without mercy, making it incredibly hard and requiring a lot of skill, concentration, and even luck to get as far as you can.

Fortunately, controls are responsive and work well enough in order to avoid becoming an inconvenience. The game has a nice pace that keeps getting harder the longer you play. Each successful car and pedestrian that makes it through the crossroad in one piece will give you points. Rack up points and you’ll advance through levels (read: the game will get harder).

When you finish a game, you get the option of returning to the main screen (for some weird reason, since it is nothing more than a way of starting the game again), restart the game, or look at your place on the leaderboard. You can also compare your current score with your highest score. 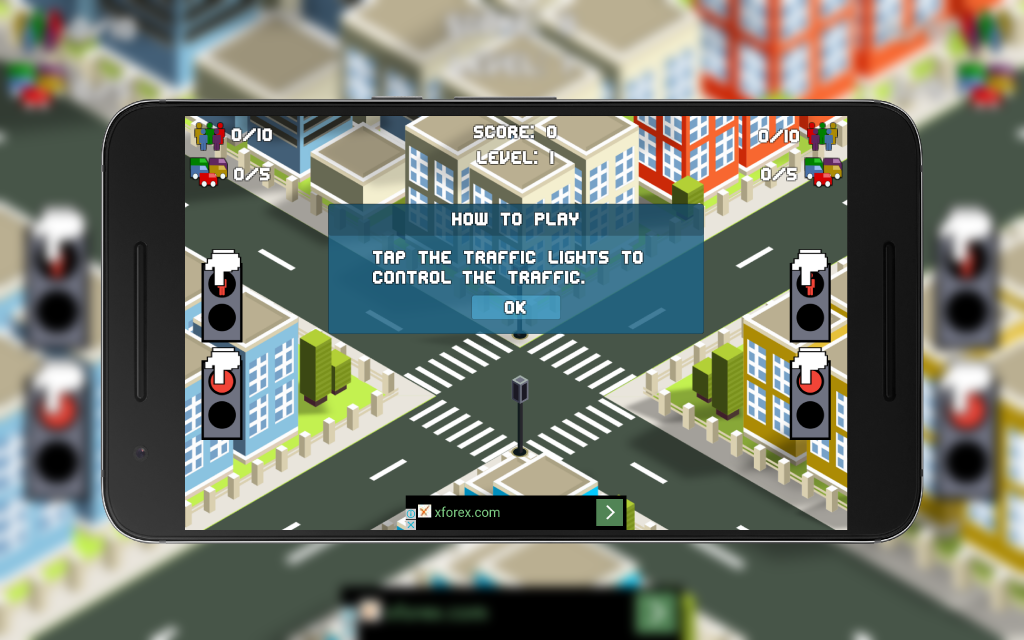 The controls are so simple that this is literally the only explanation you’ll need.

Sadly, this last part is more important than it should, since it’s the only element of the game that provides replay value. There’s no achievements or progression in the game: it’s just you against your high score.

This means that, after several times playing the game, you already have seen all it has to offer. Make sure you play in short bursts, then. You might start to get a bit bored of it after a while if you do otherwise.

Absolutely every asset of the game is done in a pixelated way. You may or may not like the increasing influx of games featuring pixel art, but I think that, as long as it chooses a pattern and sticks with it to the end, it’s fine. Fortunately, The City Traffic has done a good job in making sure that every asset follows the same pattern for the most part. This results in a game with a cohesive appearance and that looks pretty.

My only complaint is that, in my opinion, perfect circles do not belong in a game with pixel art. There are some places where perfect circles are displayed (very apparent in the traffic lights you have to press to control the game), so they look a bit off when you see them against the buildings, cars, and pedestrians. 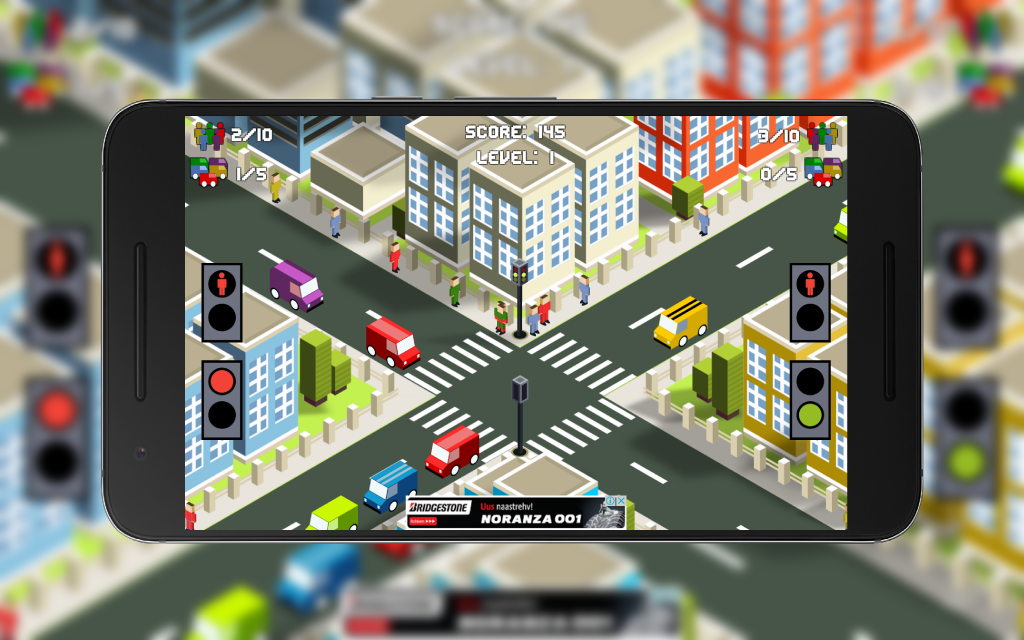 Things can get frantic really fast.

There’s one song that plays through each of your rounds. It has a very soothing and relaxing vibe to it (which is a nice contrast to the mayhem that’s happening on screen). There are some other sound effects sprinkled here and there, but nothing to write home about. Everything is appropriate and of a quality decent enough to not disturb the gameplay but enhance it.

There’s a small, persistent ad at the bottom of the screen at all times. That’s not bad at all, and something that a lot of games and apps do in order to avoid having to charge customers. 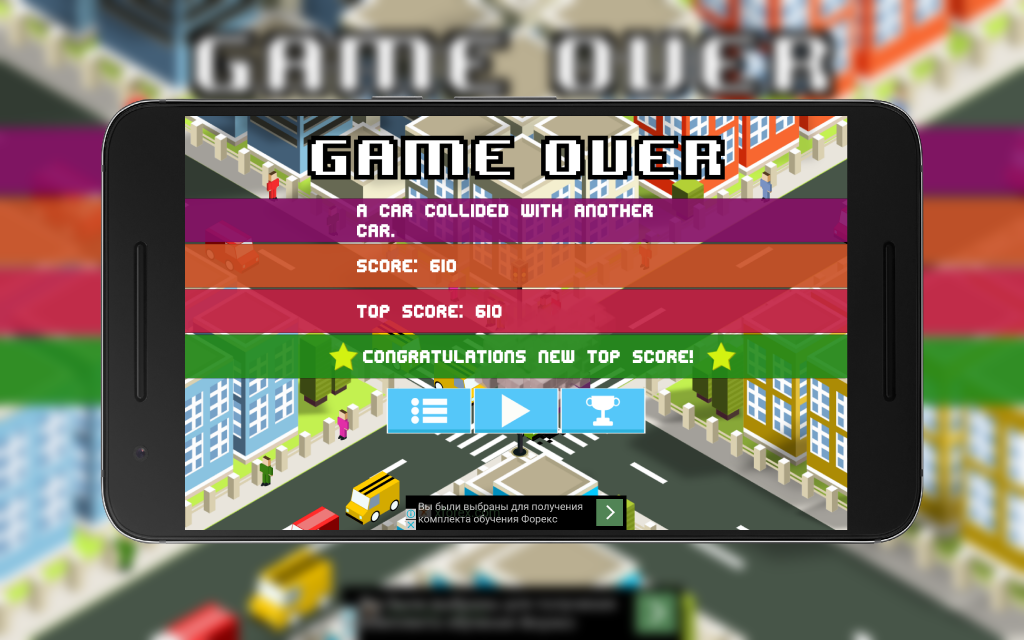 Get used to this screen, because you’ll se it a lot.

However, the big problem comes when you finish a game (and, as you may have figured, that will happen a lot). Sometimes, it will show a full-screen video ad, which is, in my opinion, the most unforgivable sin of mobile advertising. Nobody likes video ads, and even less when they’re full screen on a phone that probably has a limited amount of data. Unfortunately, with each passing day, video ads are becoming the norm rather than the exception.

There’s no way of removing them for now through an in-app purchase, something the developer should consider since there are still people out there who are willing to pay for removing pesky ads.

The City Traffic is a nice game if you want to burn some minutes while waiting for the bus or to avoid making eye contact with the other patients at your doctor’s office. Solid graphics, decent sound, and a frenetic gameplay make this game suitable for short bursts. Don’t expect it to be a deep, story-driven game, though. Apart from improving your high score, there’s no replay value and nothing to bring you back other than your own addiction. If you don’t mind this, then it’s a fun, easy-to-play game that will serve you well.

Download The City Traffic from the Google Play Store.