We’re used to surprise announcements at Xiaomi events, but this time, it’s a rather special one. After showing off the Mi Note 2, the company unveiled the Mi MIX “concept phone” — one that’s headlining with a cool 6.4-inch, edge-to-edge 1080p LCD (even at the top two round corners, and without using the old optical illusion trick). The high-end device also features a glossy full ceramic body and buttons, with no earpiece or proximity sensor, allowing for a cleaner look on the device’s top edge. And, naturally, as flagship phone it has flagship specs. For a moment there, we were wondering why Xiaomi would spend so much time talking about a concept phone, but then, as a final surprise, we learned it’s something people will actually be able to buy.

According to Global VP Hugo Barra, the Mi MIX was kept under wraps before launch, to the point where CEO Lei Jun didn’t even use the relevant slides during rehearsal. It’s no wonder, then, that were no leaks about the device. The closest I got was a rumor — which turned out to be false — about Xiaomi launching two versions of the Mi Note 2: one curved and one flat.

Xiaomi’s collaboration with famed French designer Philippe Starck on the Mi MIX was another surprise. Barra said the project started in 2014, with Starck’s main contribution being that he helped set the high-level direction for the team. Later on, he was heavily involved in guiding the device’s look and feel. While sharing the stage with Lei, Starck took the opportunity to express his fondness of the ceramic edition Mi 5, which was Xiaomi’s first attempt at using this fancy-looking material. By comparison, the ceramic edition Mi 5 was apparently more difficult to manufacture than the Mi MIX, due to the body’s 3D curve. 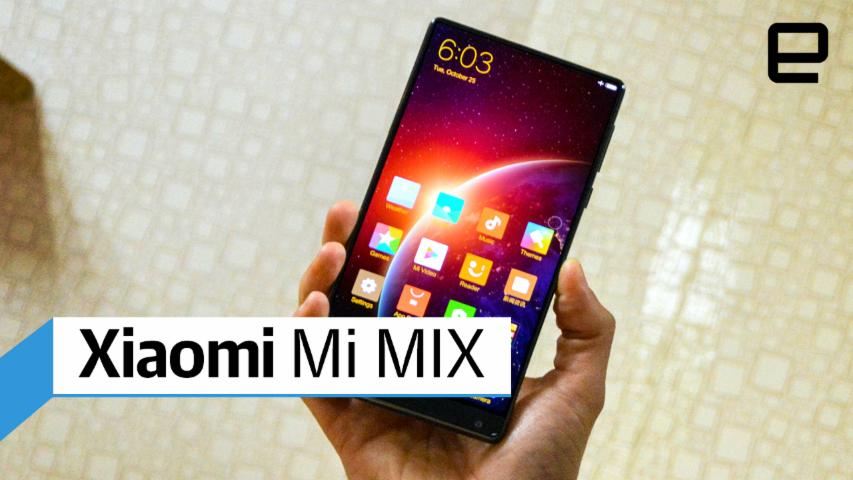 Going back to the Mi MIX, you’ll see that the earpiece and infrared proximity sensor have been removed from the top to make way for the edge-to-edge display. It’s so expansive, in fact, that it occupies a whopping 91.3 percent of the available surface space. These features are replaced by a cantilever piezoelectric actuator behind the glass to produce both audible sound for phone calls. There’s also ultrasound for proximity sensing — a first for smartphones. The latter is powered by Elliptic Labs’ cunningly-named “Inner Beauty” software solution (because it contributes to the device’s outer beauty, get it?), but as simple as it sounds, this Norwegian startup has been working on this technology with Xiaomi since the end of 2014.

“Qualcomm tried to do this but they pulled out of this market,” Elliptic Labs CEO Laila Danielsen told Engadget. “We know that many other smartphone manufacturers have been trying to do that, but they’re not able to because it’s really difficult,” she added, referring to how you’d need a sophisticated algorithm to address the distortion when the signal travels through glass.

Danielsen believes that a Norwegian company like hers is more likely to succeed in this field thanks to the local expertise on ultrasound technology, which is used in the region for fishing, healthcare and seismic analysis. Now, with the launch of the Mi MIX, Elliptic Labs is apparently already 16 to 18 months ahead of the competition as it has the automatic testing tools plus scalability. Its next goal: to bring ultrasonic gesture control to smartphones as well. 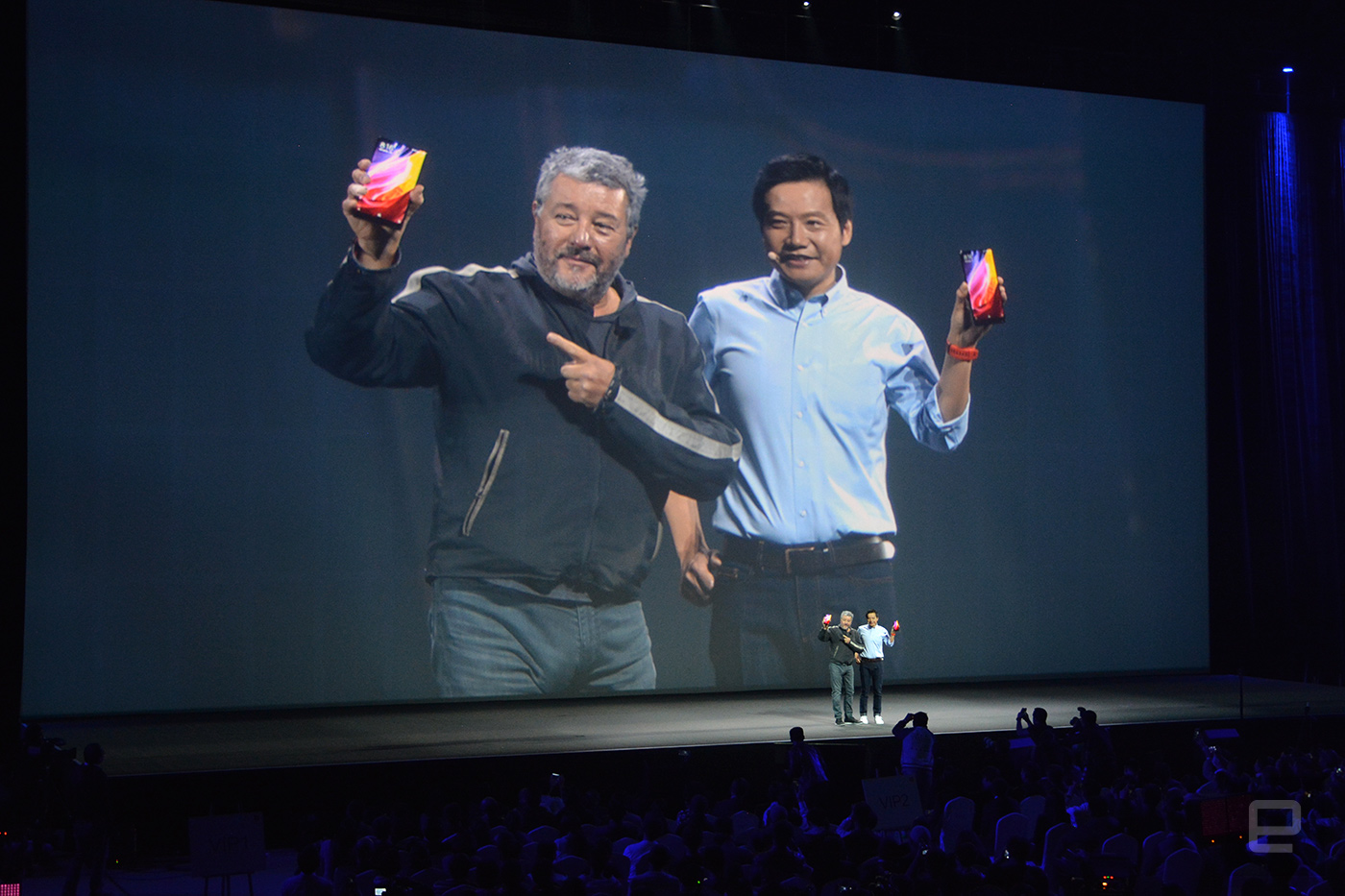 The rest of the Mi MIX is just as impressive. This Android phone features a Qualcomm Snapdragon 821 chipset clocked at 2.35GHz, along with either 4GB or 6GB of LPDDR4 RAM, 128GB or 256GB of UFS 2.0 storage, a massive 4,400mAh battery with Quick Charge 3.0 support, a fingerprint reader, NFC, HD audio playback, a 16-megapixel main camera and a tiny custom-made 5-megapixel selfie camera (the module is half the size of conventional ones). Like the Mi Note 2, the Mi MIX also supports LTE Cat 11 with download speeds of up to 600Mbps using tri-carrier aggregation.

Combining these great specs with such an ambitious design, it’s only fair for Barra to call this phone the “Formula One” product from Xiaomi. Still, there’s no doubt that the Chinese company will also continue to serve the mainstream market — after all, it does have some catching up to do if it wants to gain Chinese marketshare. Even so, devices like the Mi MIX feel refreshing at a time when the market for phones — and the rate of innovation, for that matter — is otherwise slowing. 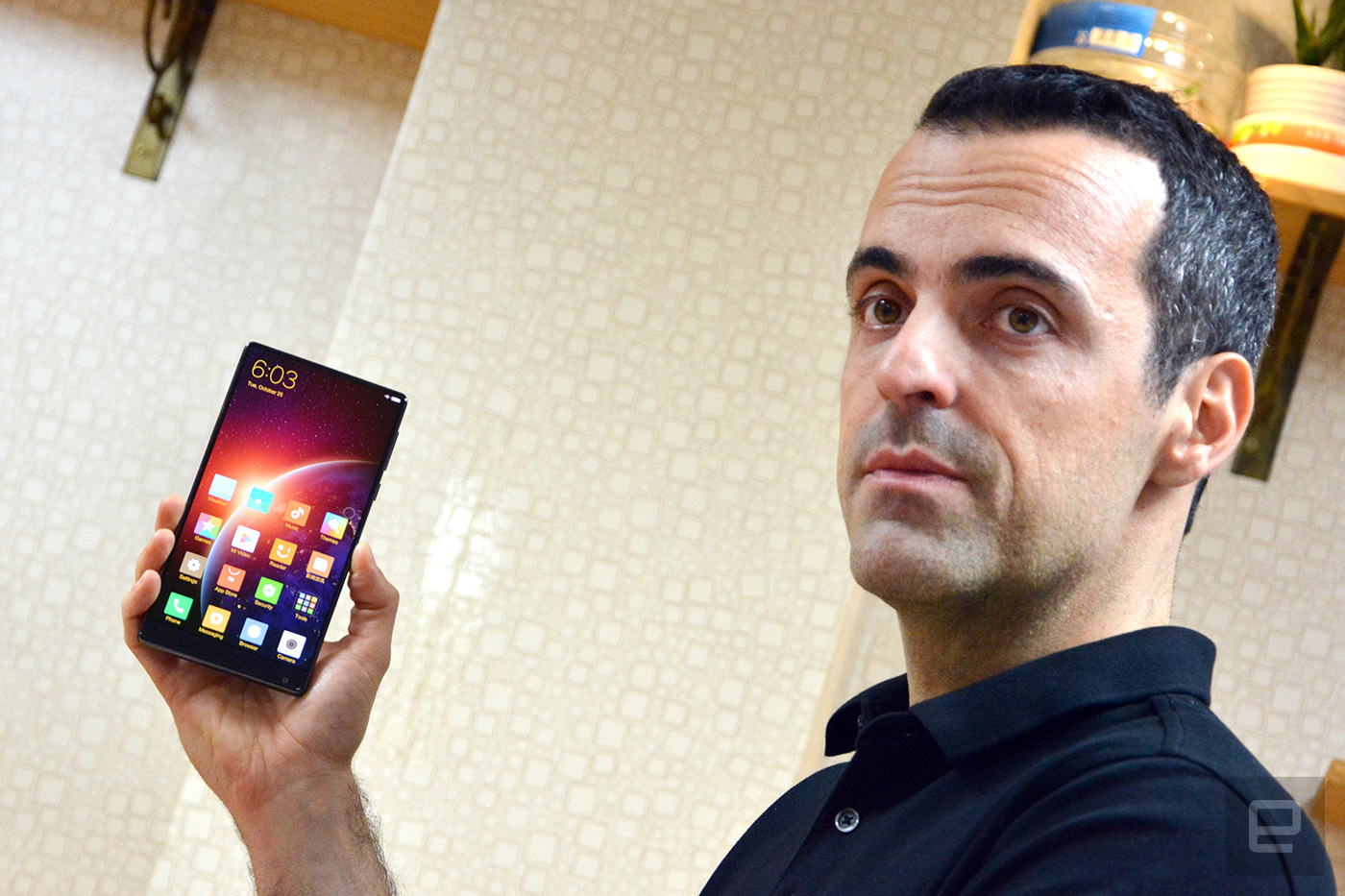 The Mi MIX will be available in China on November 4th. The base model costs 3,499 yuan (around $516), while the top-end model — which sports 18-karat gold rims around the main camera and fingerprint reader — is priced at 3,999 yuan, or about $590. These cost a good deal more than what Xiaomi usually asks for, but given the unique design and specs, the price is still reasonable compared to other phones, and will probably indeed sell well in a country where Xiaomi has already won many fans.