Driving while connected with the Navdy heads up display

Not everyone can afford to replace their current whip just to get the latest automotive smart features. The aftermarket world has got your back if you want to upgrade your stereo, but if you’re looking for an HUD (Heads up Display) there aren’t a lot of great options. In steps Navdy, a third-party way to make your car smarter with the power of projection. It’s full-featured and ready to smartphone features on your dash.

Two years after dropping a slick commercial and Kickstarter campaign, Navdy’s smart HUD is finally shipping. But the portable $800 device does more than display your current speed. Via a companion app for iOS and Android, it has turn-by-turn navigation, music control plus messaging and call notifications. It’s a see-thru version of your smartphone on top of your dash and most of the time, that’s great. On the other hand, there are times when it becomes painfully obvious that it’s not a factory-fitted item. Being able to see an incoming call without taking your eyes off the road is handy, but for some, might not be enough to justify the price.

Before even considering the Navdy you have to make sure it’ll work with your car. It requires the OBD II port from a vehicle from 1996 and later. Also, bad news if you just upgraded to an EV, Navdy it won’t work with any electric vehicles. If your car fits into those parameters (and frankly most will), you’re good to go. 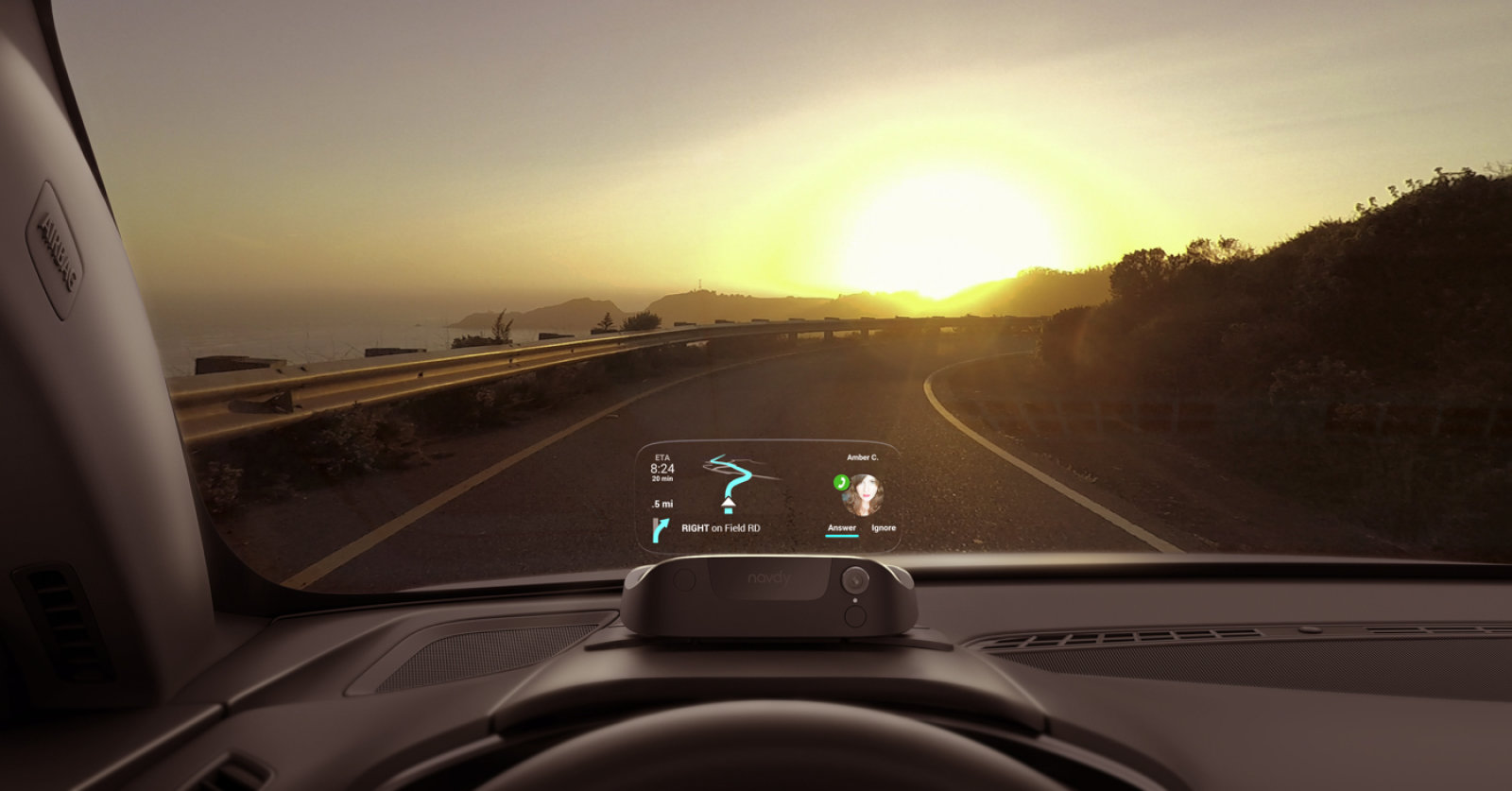 And the Navdy is all about going. The full-color HUD display is impressive once you flip up the display and adjust it to your viewing angle. It handles direct sunlight and the darkest night without being washed out or so bright it burns your retinas. Information is presented plainly which is what you want from something that’s designed to keep your eyes on the road. Even when filled with information you’re never distracted from what’s ahead of you. Out of the box, Navdy has adjusted the focus range of the display so that the images appear to hover over the hood of a car.

The actual information Navdy serves up varies from helpful to user-enabled overload. The navigation and turn-by-turn directions are great though, which, of course, is likely the majority of what you’ll do with Navdy. Confusingly, these features are powered by Google search, but use Here maps. It’s odd, but it works and that’s all that matter. Since Navdy is hooked up to your OBD port for data and power, it also knows how much gas you have and your current speed, meaning this info is available for display also.

But it’s the notifications (Navdy calls them Glances) and how the system handles them that’ll make some very busy people very happy. By default, it’ll show you incoming phone calls and text messages, and alerts can be dismissed via the hardware scroll wheel you attach to your steering wheel. You can set Navdy to just read text aloud, display the text only, or do both. I used both audio and visual cues during my test and it worked brilliantly.

I foolishly thought I’d try activating notifications from Slack, my email client, Facebook, WhatsApp, Twitter and Facebook Messenger. The result was overload and a clear sign that even if you’re looking at the road, too much distraction is incredibly dangerous. At the very least, it’s a literal reminder that I receive far too many emails in a single day. 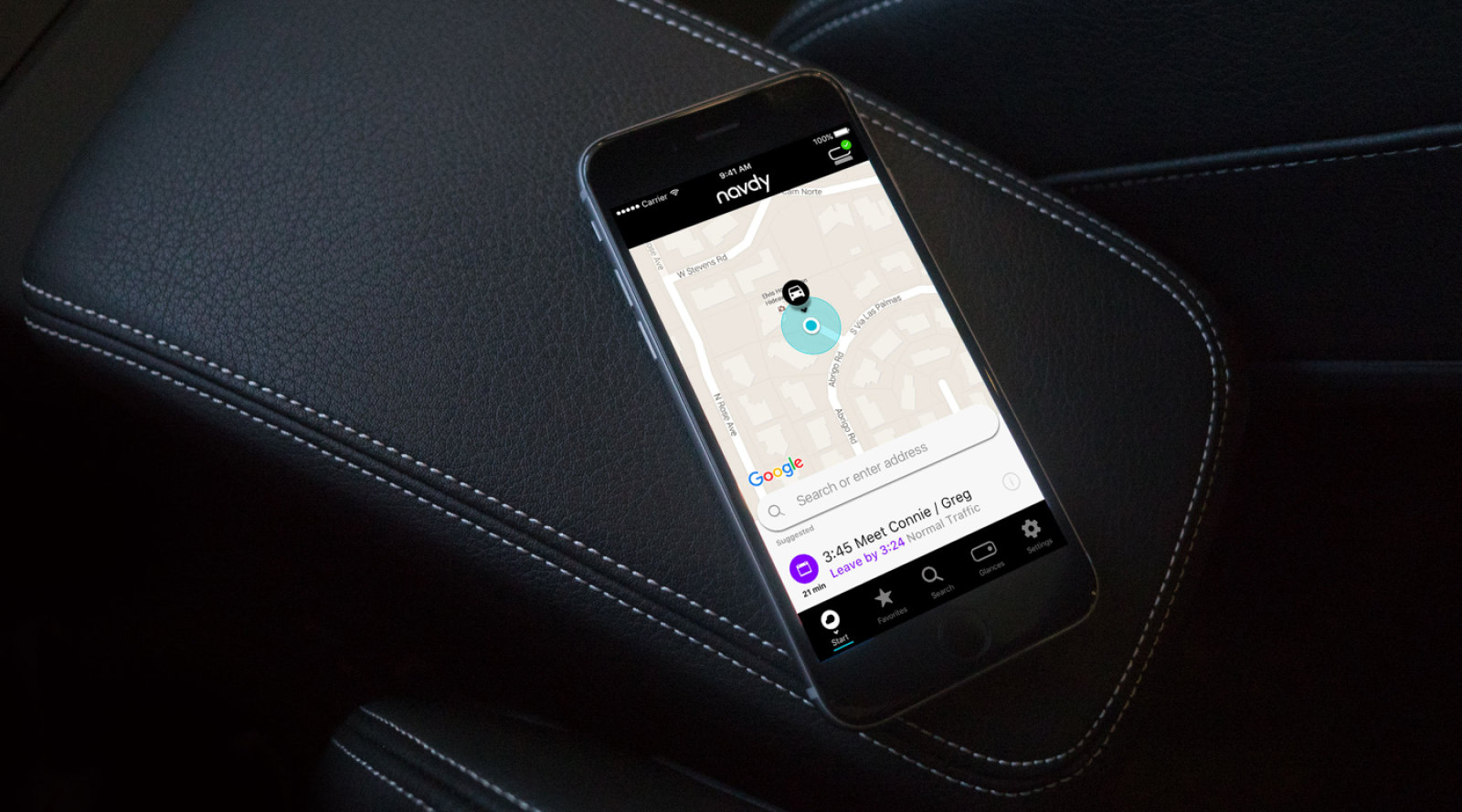 While the inclusion of hand gestures (swipe right to answer, left to ignore) is nice, most will use the dial that attaches to your steering wheel to navigate the menus and control their music. It’s easier to spin the dial with your thumb and select with your thumb instead of swatting in the air. If you prefer voice commands, you can access Google Assistant or Siri with a long press of the central button. Using those voice-power helpers to find and play music, place calls and reply to messages makes for a very nice technological marriage of car display and smartphone feature.

But that voice integration doesn’t work Google or Apple Maps apps for navigation. Instead, you have to use the mapping software within the Navdy companion application, and that means no voice-powered address search. You can add favorite locations to the app that appear in the display, but if you need to head to a new location while driving you have to fire up your smartphone and enter it in by hand.

The lack of support for other mapping apps is the system’s achilles heel. While it delivers a safer way to interact with navigation, music and ongoing routing, it’s a shame drivers have to unlock a phone to add a new address. In fact the system is so tied to the app that it has to be running when you turn on the Navdy. But like launching much like Spotify for music, launching the app became second nature when I got into the car and placed the portable device onto its base. 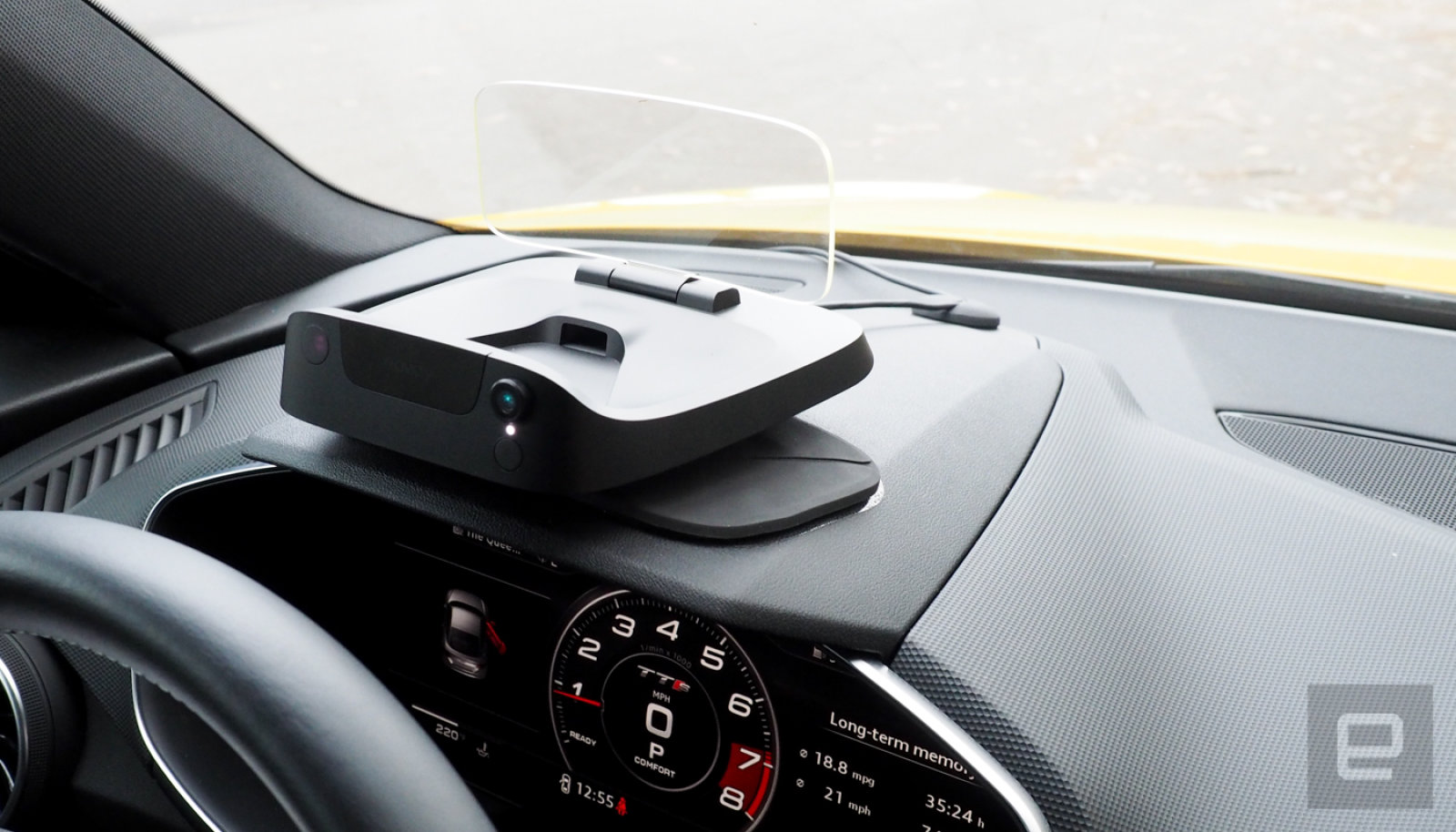 I was initially concerned that making Navdy portable and removable would be a pain. Who wants to drag a piece tech out to the car every time they drive? But like launching apps, placing the device on its magnetic dock became second nature.

Plus, if installing something like this isn’t within your comfort range, the company has a partnership that’ll it easy by having someone else do it for you.

While Navdy says that people will be able to install it in about 15 minutes, the company has teamed up with Enjoy for same day delivery and installation in a number of major cities (Los Angeles, Chicago, Manhattan, Dallas, Houston, Atlanta, Miami and the San Francisco Bay area). The kit itself includes an adhesive pad with a docking station that plugs into your car’s OBD port. The actual Navdy device attaches to the base with magnets which seems like it would be a bad idea, but during my drives (which included multiple trips through a kidney-jarring construction zone) the device was never came loose. 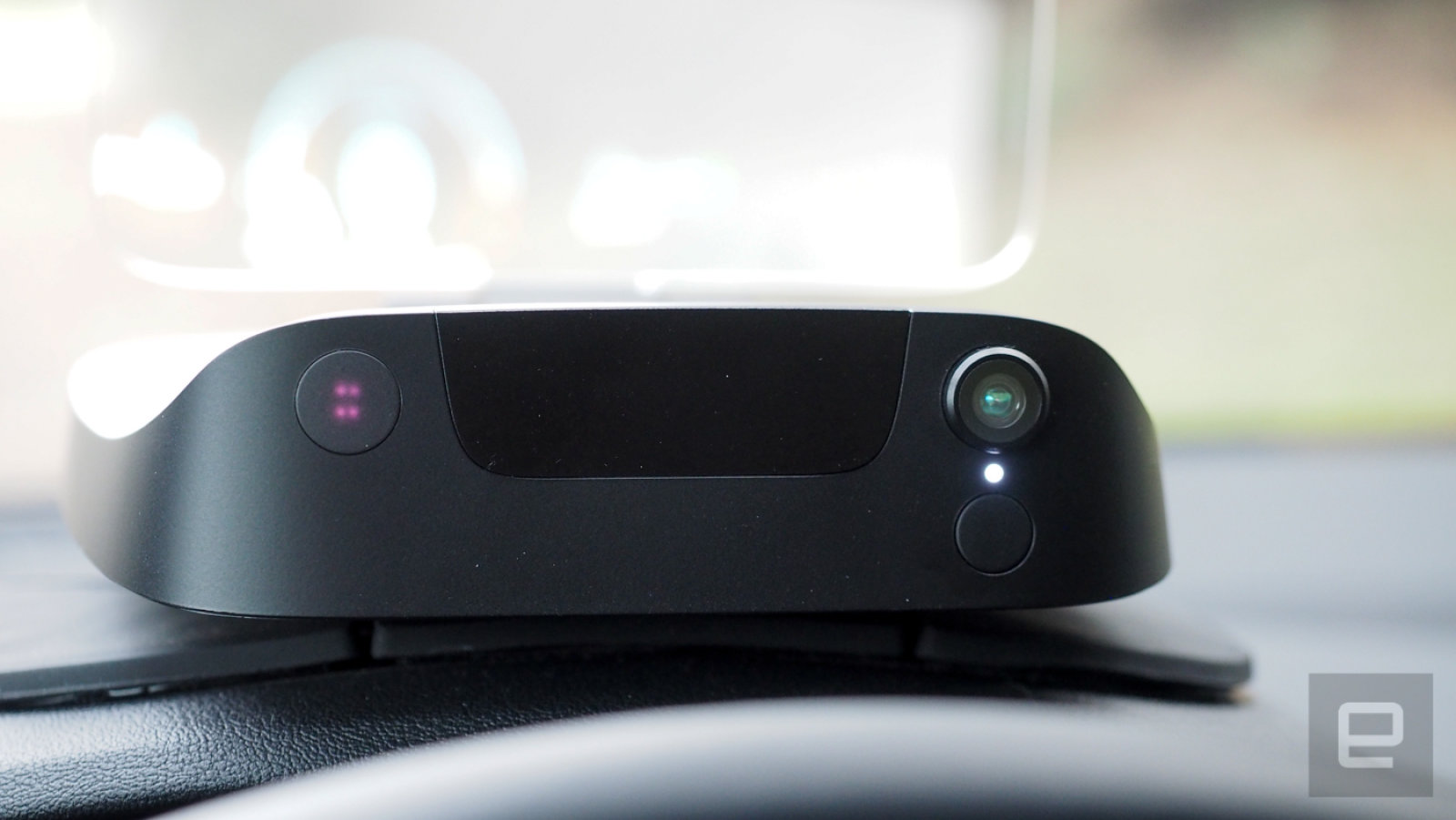 If you do frequent rough roads though, or have a vehicle with harder than usual suspension (for example a sports car), Navdy’s HUD display is probably not an ideal solution. No matter how well it’s mounted to the dash, the adjustable display is prone to vibrations in less than ideal road conditions.

I tested the system in an Audi TT on San Francisco’s perpetually under construction avenues. On a road near my house that’s been under construction for what seems like years, trying to read the display while it vibrated resulted in a headache. Even in “comfort” mode the TT has stiff suspension. Throw in potholes, ruts and ignored infrastructure and the Navdy becomes useless. This happened on only about 10 percent of my drives and only on a single rough patch of the freeway. If your car’s suspension isn’t tuned for cornering you should be fine, but you might want to take note of the condition of your usual driving routes before dropping $800 on a HUD.

Despite its minor flaws, the Navdy is a solid product that adds functionality I didn’t even realize I wanted. On a few occasions I jumped into the car and started driving without placing it on the dash and instantly missed it.

On one trip, I drove down an unfamiliar street at night and realized it would be easier and safer if I pulled over and dropped Navdy on the dash instead continuing to glance down at my phone for directions. With the HUD in place, I have great, visible navigation and can leave the phone in the glove compartment. The allure of constantly being connected means I haven’t done that in years. For the record I don’t text, tweet or Facebook and drive but just having the phone nearby just in case has been my excuse for keeping it handy. Navdy erased that need and made my driving just that much safer.