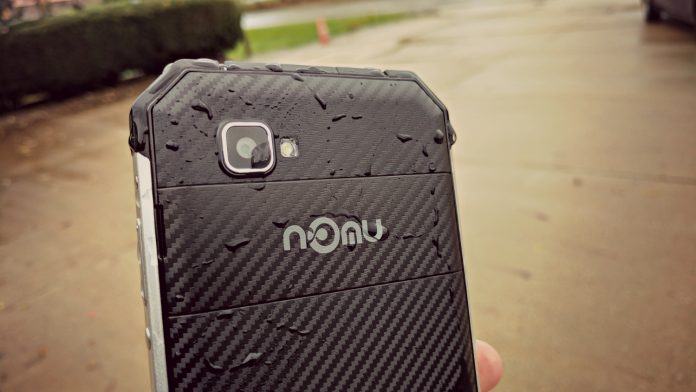 We recently received review units to two of Chinese handset maker Nomu’s new unlocked smartphones, the S10 and S30. Launching this week, the devices are powered by Android 6.0 and feature IP68 waterproof protection. Moreover, they each boast a downright insane battery at 5,000mAh capacity. In terms of specs to price ratio, the handsets come in rather aggressively at $100 and $230, respectively. 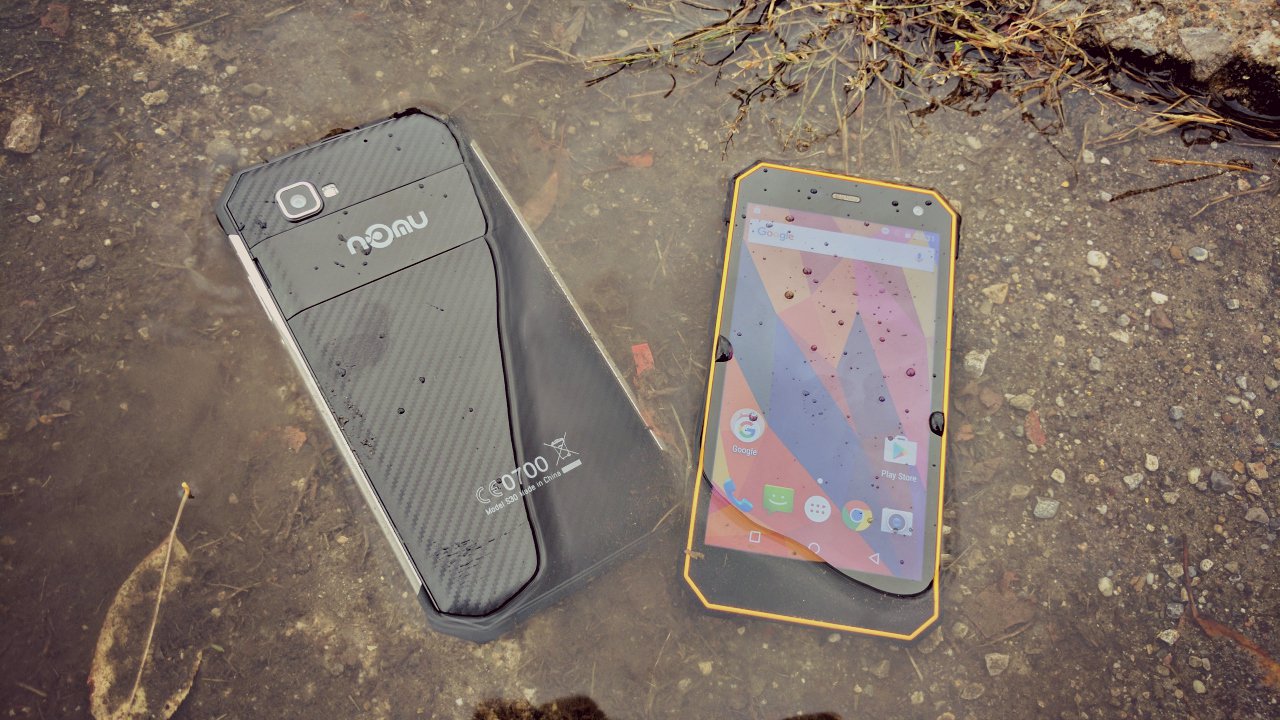 We’ve only had these phones in our possession for a few days, so do not look for this to be a comprehensive review. Rather, this will be more of a piece that details what comes in the box, how the devices stack up against each other, and what we think of them so far. A full review will follow in the coming weeks.

While the two phones do share a number of features and traits between them, there are are obviously going to be differences. Here’s a quick breakdown of each model.

What’s In The Box?

We’re not sure if the review units we received are actual retail model boxes but we suspect they might be. But, with that said, it’s a no-frills experience that doesn’t give you any more than it needs to. The cardboard box is brown and features only the Nomu brand embossed on the top; the bottom has a sticker with the model number and serial number. 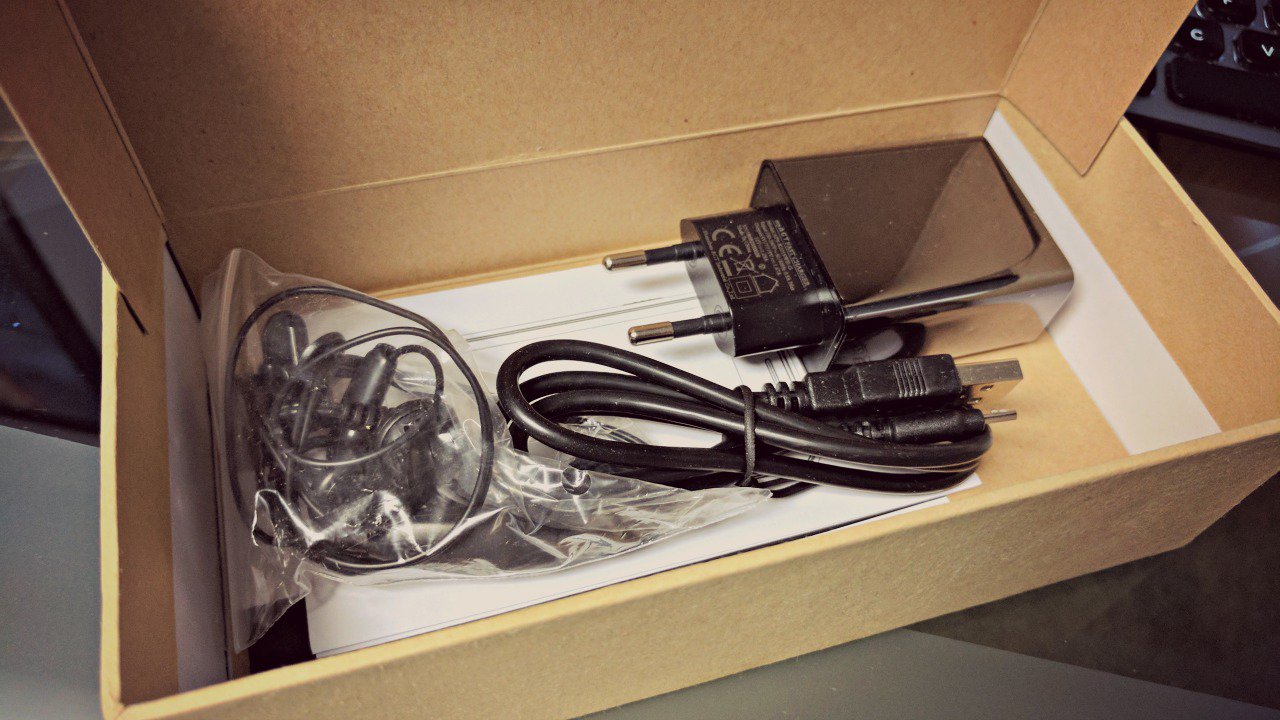 Inside you find the phone, a pair of headphones, and a wall charger and USB cable. The outlet plug, for what it’s worth, is not going to work here in the United States. You’ll want to either get an adapter or just use one of your existing units to plug the cable in.

The quick-start guide details the basics of the phone, indicating where all of the ports and buttons are. It does have multiple languages, one of which is English.

Taking the phone out of the box and powering it on, you get the sense that these phones are rugged and ready for various conditions. Indeed, the IP68 ratings, utilitarian design, and general aesthetics signal the S10 and S30 are the sort of phones that a construction worker, contractor, or field worker might enjoy having. They’re not unlike what Kyocera is doing with its DuraForce line. 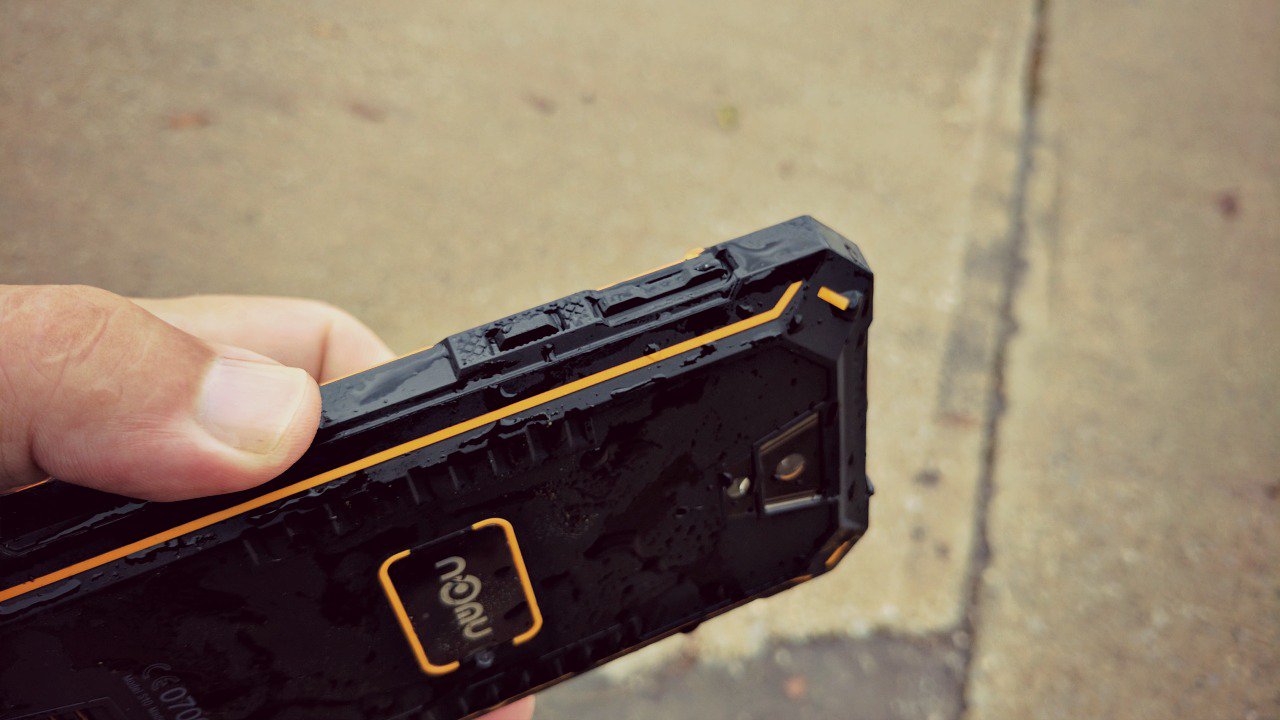 Both models have very distinct and angular corners with rubber edges. The S10 has a little bit more of a rough and tumble build that looks like something out of Battlestar Galactica. Moreover, the orange and black colors look sharp and unlike anything else we’ve spent time with.

The S30, for its part, doesn’t look to be as waterproof or built to spill. In fact, we had to double-check and triple-check that it was IP68 rated before putting it into water. The back of this one has more of a plastic shell with carbon fiber design and silver aluminum/titanium side. It would easily pass for an early generation of Droid from Verizon and Motorola.

Hey look, it’s a nearly stock Android experience! Props to Nomu for not doing much to mess with the look and feel of the phone. It’s easy for a Chinese hardware maker to put a “foreign” spin on things that doesn’t resonate with US buyers. Fortunately, it appears that there’s not much done here to customize the interface.

With that said, the icons look like something you’d find in an old version of Android, perhaps something around the Ice Cream Sandwich and Jellybean era. It confused us at first, because we though, “wasn’t this supposed to be Android 6.0?” Alas, it does run Marshmallow, but with an interesting approach.

Looking through the settings we see a number of options that don’t come standard with Android. Be it gestures, flip to mute, or other subtle tweaks, it’s a nice mix additional options. And, while they may not be something we specifically use, there’s nothing here that feels out of place. If someone were just getting into Android or smartphones, we see things that would actually appeal to them or make the experience better. 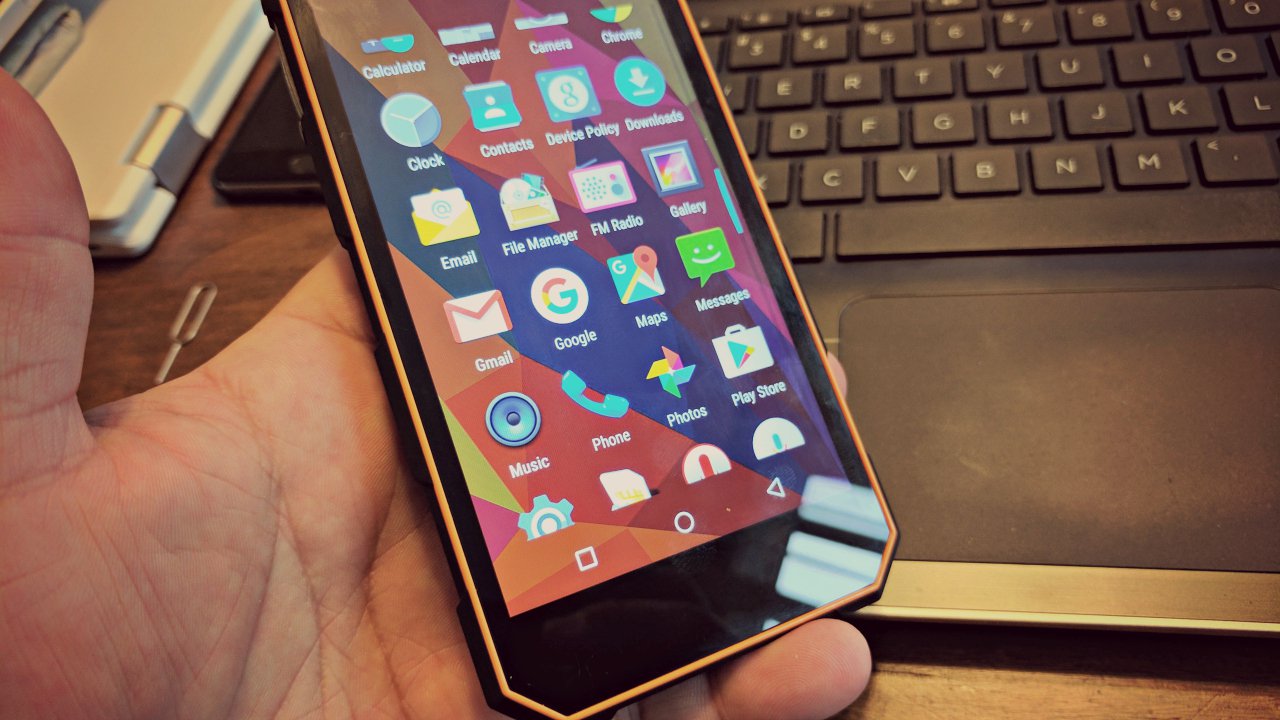 While there are a handful of the major Google apps present on the S10, you’ll have to head to the Play Store to pick up a few of them. Present are Calendar, Chrome, Gmail, Google, and Play Store. You’ll need to manually install others such as YouTube, Hangouts, Drive, Mesenger, or Google+. 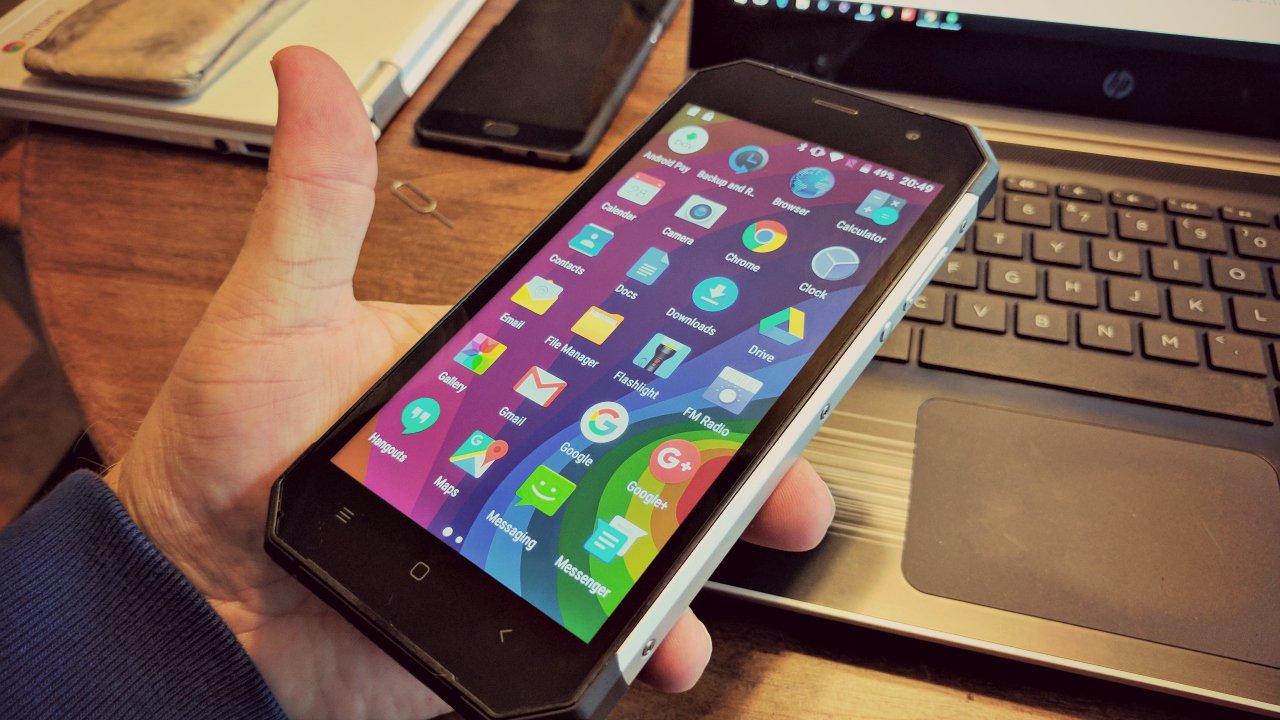 The S30, by contrast, had nearly all of the above (no YouTube) as well as Photos, the full suite of Google Play clients, and Android Pay.

We tested the speakers out on both models and found the S10 to get really distorted at the higher volumes. Moreover, it was a flat and unappealing experience. Perhaps related to a couple of water droplets that were still on the speaker, we heard some minor rattling or extra noise that should not have been present. The S30, by comparison, was louder and more full. 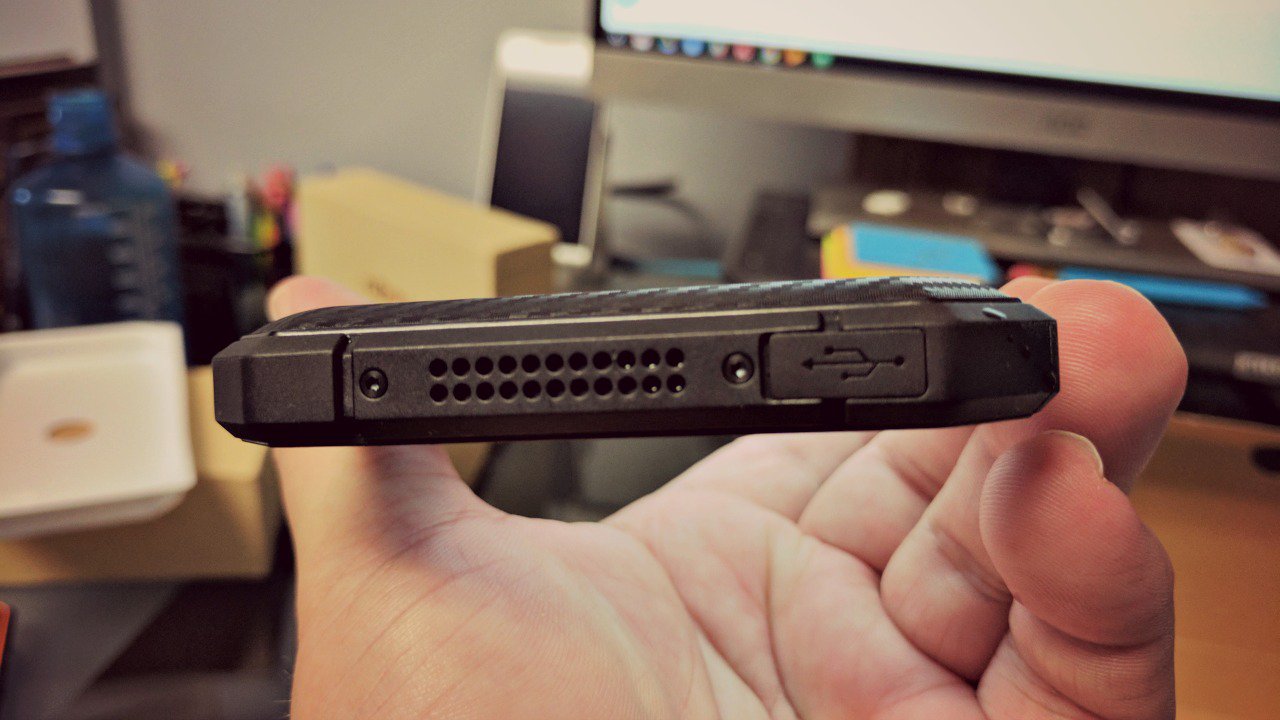 Same thing goes for the camera. The S10 is so-so, if not a little less than desired, while the S30 comes in with more of what you’d hope for in a smartphone. Keeping price in mind, we can see where corners have to be cut. It’s not always the RAM and storage that makes the difference; sometimes it’s the internal components, too.

In short, the S10 is probably around a 2/5 stars with the S30 closer to a 3/5 stars. We’ll get a better sense for both the audio and camera features over the coming days and weeks.

We’re always reluctant to put phones into water, even when they carry a certified rating. our philosophy is that unless you absolutely have to, there’s no reason to tempt fate. And, while these two phones do protect the ports and speakers, there’s always that slight risk that you could “do it wrong”.

With that in mind, we did submerge both phones into water, albeit briefly. It just so happened that it had rained for two days straight here at the office. Going outside, we found a couple of puddles in which to dunk the phones. Both continued to work immediately after and in the hours to follow.

We are compelled to tell you, however, that the S30 seems to be just ever so wonky at times. It’s hard to say if it’s related to the water or something else in the hardware and software, but the home screen likes to bug out. By that we mean it acts as if you were long pressing on it to change the wallpaper. It flits and flickers and a quick press of the home key brings things back in line. We also saw traces of this when navigating around the device in various apps, too.

A Note About Network Support

One of the best features of most unlocked phones is the almost universal support for GSM carriers. Here in the US we have two major players competing on the GSM 4G LTE front, AT&T and T-Mobile. Verizon and Sprint, for their parts, offer their own 4G technology with CDMA.

Every so often a phone comes along that sounds so appealing on paper that you simply can’t pass it up. That is, until you look closely at the supported networks. Alas, the Nomu S10 and Nomu S30 don’t have the same support for 4G LTE that you might expect or hope for in the US.

While there are a few frequencies allowed for, you’re going to have a tough time getting nationwide coverage, especially at higher speeds. Take a look at the respective carrier bands and frequencies and you may end up with 3G speeds at best.

The last thing we want to do is endorse something that you end up buying only to find out it doesn’t work in your area. After all, a smartphone is rather dumb if it has not data to support it.

Understanding that our readers are not entirely US-based, we are certainly not going to write this one off. There are obviously going to be users who may benefit from such a device. We’ll do our best to put together as thorough of a review as possible in the next few weeks and circle back.

Already set and looking to pick one of these up? There are a number of places to do so, including Gearbest, Everbuying, Geekbuying, and AliExpress. As part of a launch event, you can head to Nomu’s promotional page to check out more details. As a refresher, the Nomu S10 runs $100-$120 while the Nomu S30 fetches approximately $230.

In the meanwhile, feel free to learn more at the links below:

Read more from Reviews
News, Smartphone Reviews
← What is Google Chromecast and why should you care?
Facebook employees argued to ban Trump’s posts over hate speech →