This post was done in partnership with The Wirecutter, a buyer’s guide to the best technology. When readers choose to buy The Wirecutter’s independently chosen editorial picks, they may earn affiliate commissions that support their work. Read the full article here.

After researching more than 20 smart hubs—the brains that let all of your smart-home devices work together—and living with a half-dozen of them for a few months while putting them through their paces with an array of smart locks, thermostats, room sensors, switches, lights, and more, we think that the Samsung SmartThings Hub is the best hub for most people who want to buy right now. It’s competitively priced, is compatible with a large number of third-party devices, and supports most of the major wireless protocols relied on by smart devices.

We think it’s important to note, however, that we struggle to fully throw our support behind any one model without substantial reservations. The SmartThings hub is the most evolved among a number of well-rounded products out already. Still, to date, we don’t believe that any one smart hub is an unqualified, home-run purchase that would satisfy most people—our baseline standard.

A smart hub is essential for anyone who wants to use a single centralized app to control their wirelessly connected lights, thermostats, smoke alarms, motion detectors, sound systems, or any other smart-home devices and appliances. A smart hub acts as the middleman in a system, facilitating communications between all your various devices and enabling control of them too. It can also automate your devices so they work with each other without any interaction from you. You can easily set up simple scenarios such as having the system automatically turn on the lights whenever you unlock your front door; a more complex system and a little work can let you set up the hub to use inputs from various sensors and switches and adjust devices in your house accordingly. The DIY hubs we tested for our guide are a fraction of the cost of the top-shelf home-automation systems that are custom-installed by the pros, though to get anywhere near the same level of functionality and polish takes a little effort.

Setting up and using a smart hub requires a functional level of tech know-how, at a minimum the ability to use a smartphone or tablet and apps, as well as familiarity with pairing Bluetooth devices and/or logging your various devices onto your Wi-Fi network. Complicated setups may require a bit of patience, a few hours of perusing online help forums, or a call or two to tech support.

Because connected products have so many different competing technologies among them, we searched for hubs that offered compatibility with as many products and standards as reasonably possible, yet remained easy to set up and use. We also nixed hubs that required buying into a very expensive ecosystem to get started or require custom or professional installation. After cutting down our list, we consulted veterans in the field, including representatives from Apple, Nest, Insteon, Lutron, and the Z-Wave Alliance, as well as a number of editorial resources and customer testimonials.

To discover what these hubs are capable of, we pulled together a collection of test smart devices (from several manufacturers) that we think would be desirable for a typical household, including light bulbs, outlet switches, thermostats, door and window sensors, cameras, water sensors, and door locks. Our test regimen for each hub included downloading, installing, and registering an app, connecting the hub to our home network, going through the setup procedure, and then pairing each hub with as many devices as possible among our range of test accessories.

When performing our tests, we paid close attention to how friendly and intuitive the setup process was when setting up the hub and, in particular, when linking devices together to create scenes or macro actions. Compatibility with wireless protocols was a key concern, as well as whether a hub needed to be directly connected to our home router or could be located remotely—a major issue if you have a large home or one with spotty wireless issues. Almost as important as the physical components of a hub is the companion app you use to control it, so we spent most of our time using apps to set up devices, link them together, create scenes, and tweak notifications settings, wherever possible. 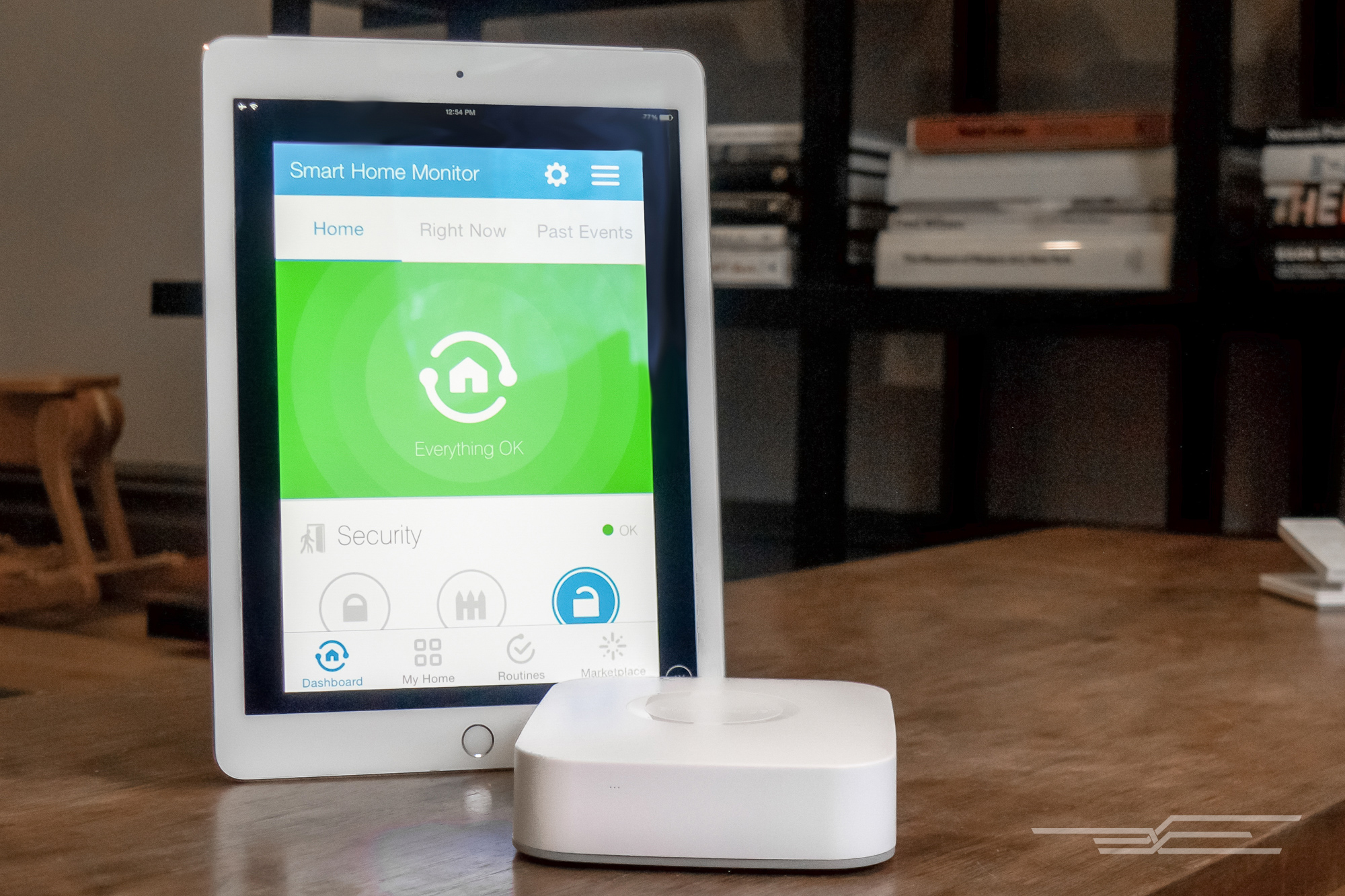 The Samsung SmartThings Hub is the most evolved among a number of well-rounded products already on the market. It’s competitively priced, is compatible with a wide range of third-party devices, and supports most of the major smart-home wireless protocols, including Bluetooth, Wi-Fi, ZigBee and Z-Wave. The companion controller app can be confounding, but within its many submenus and sections is a wealth of capability and, with some planning, the right smart accessories and devices, and patience—lots of patience—you can create a rich home-automation scheme that can hum along without requiring you to monitor it constantly. In the right hands, the SmartThings hub can steer the ship of a comprehensive DIY smart-home setup.

Setting up the SmartThings hub is straightforward, as it was with most of the hubs we tested. The SmartThings companion app, which is required for setting up and controlling the hub, takes a lot more work to understand. Compared with more streamlined app offerings, the SmartThings app is positively full of icons, buttons, submenus, and subsections. Though you could certainly get by using only a fraction of the functions offered, we recommend digging in a bit to get an idea of what SmartThings is capable of—and also why it may be a little too much for some potential users. 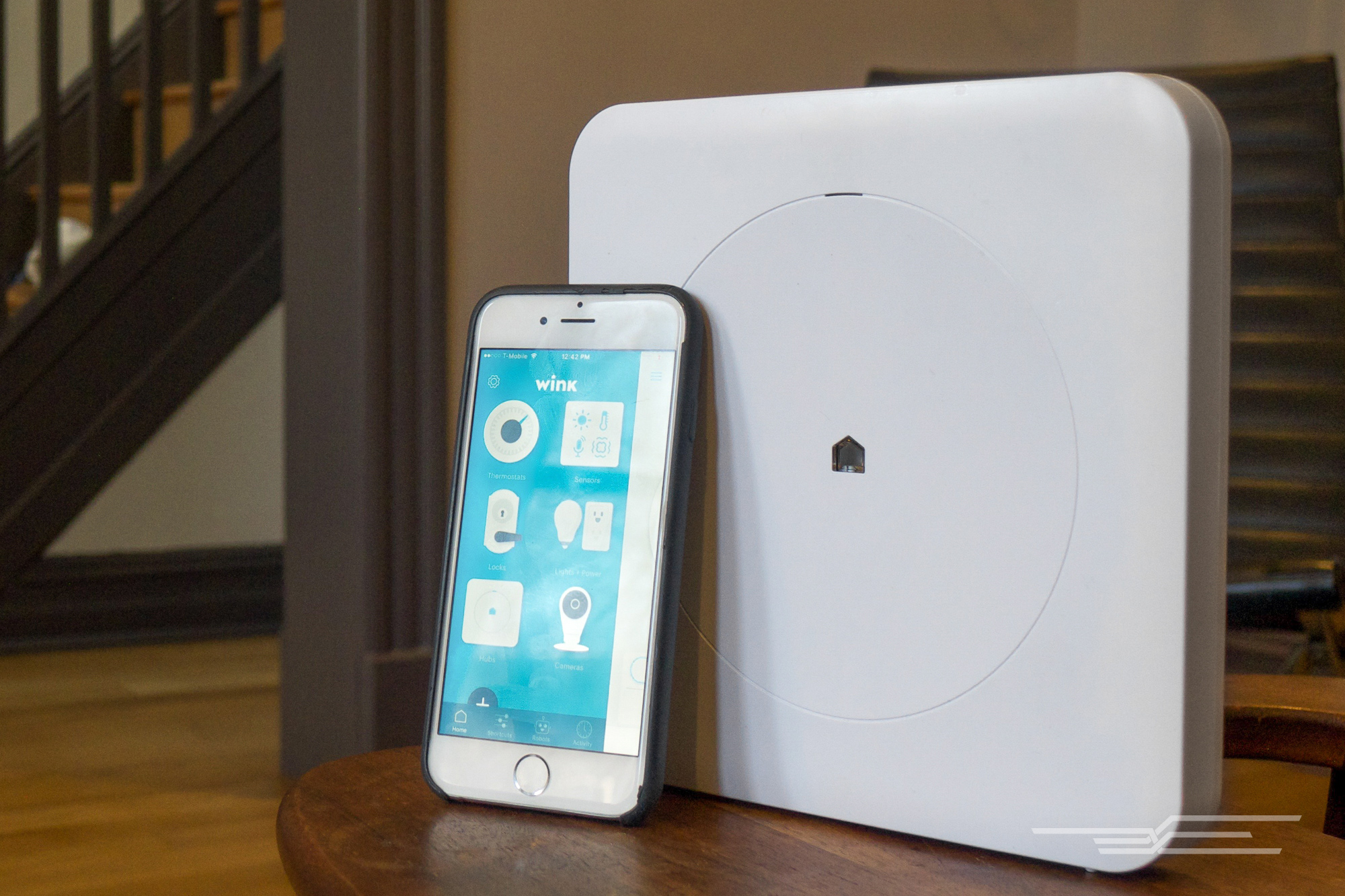 The Wink hub supports most of the popular wireless protocols and doesn’t need to be plugged into a router. Photo: Jon Chase

The Wink Hub supports most popular wireless protocols, including Wi-Fi, Bluetooth, Lutron Clear Connect, ZigBee, and Z-Wave Plus. For individual control of a device or even a few, it’s a great bargain, but for automation of several devices we believe the SmartThings hub remains a better option. The Wink does have a few advantages though. You can connect it to your home network via Wi-Fi instead of a cable, allowing you to place the hub anywhere in your home you like, which is especially helpful if reception is an issue. And the ability to pair some devices by scanning a barcode is far easier than the SmartThings hub’s often multistep approach.

In our tests we had no trouble pairing the Wink hub with a few smart locks (in fact, it was our test hub for our smart locks guide), as well as a Connected Cree LED bulb, a Nest thermostat, a Nest Cam, and an Amazon Echo. Controlling any of them and setting up notifications is straightforward via the Wink’s companion app, which is far easier to decode and use than the SmartThings app. One foible though is the method for creating automation schemes, dubbed “robots.” It’s an obtuse system of creating logic schemes for actions that tips the Wink into more-advanced-user territory. We also found that the Wink tended to suffer a greater lag time between when we triggered an action to when it occurred, which is a common complaint.

An updated Wink hub, which the company is calling Wink Hub 2, will launch at the end of October. It does everything the original Wink does, but adds Ethernet, Bluetooth Low Energy (BTE), a faster processor, and support for locally controlled automation routines.

Amazon, Apple, and Google have each staked a claim in the smart home as well. Google snapped up smart-thermostat pioneer Nest a few years ago, and later acquired Dropcam. Despite ending support for Nest’s own hub, the Revolv, Google remains involved in (and hopefully committed to) home products, and maintains a Works with Nest program that provides standards for third-party products to maintain compatibility with the Nest. Apple has its Works with Apple HomeKit program for products that meet hardware and software standards and that will, in theory, interact with other enabled devices as well as Apple devices seamlessly, including voice control via Apple’s Siri. And Amazon moved strongly into smart-home voice control with its Internet-connected Echo speaker and its newer variants, the Tap and Dot.

For more about the options for HomeKit, Echo, and Nest and what to look forward to in smart-home technology, check out our full guide.

Read more from News
Amazon, Apple, News, Samsung
← With the Switch, Nintendo could make controllers great again
‘City of the Shroud’ is an RPG with a truly player-driven story →